Accessibility links
A Different Kind Of Pride: Perspectives On 50 Years Of Celebration, Part 3 We asked writers in the LGBTQ+ community to reflect on the relationship between celebration, protest, music and LGBTQ+ activism. Raquel Gutiérrez shares music that showcases Pride's political power.

A Different Kind Of Pride: Perspectives On 50 Years Of Celebration, Part 3

A Different Kind Of Pride: Perspectives On 50 Years Of Celebration, Part 3 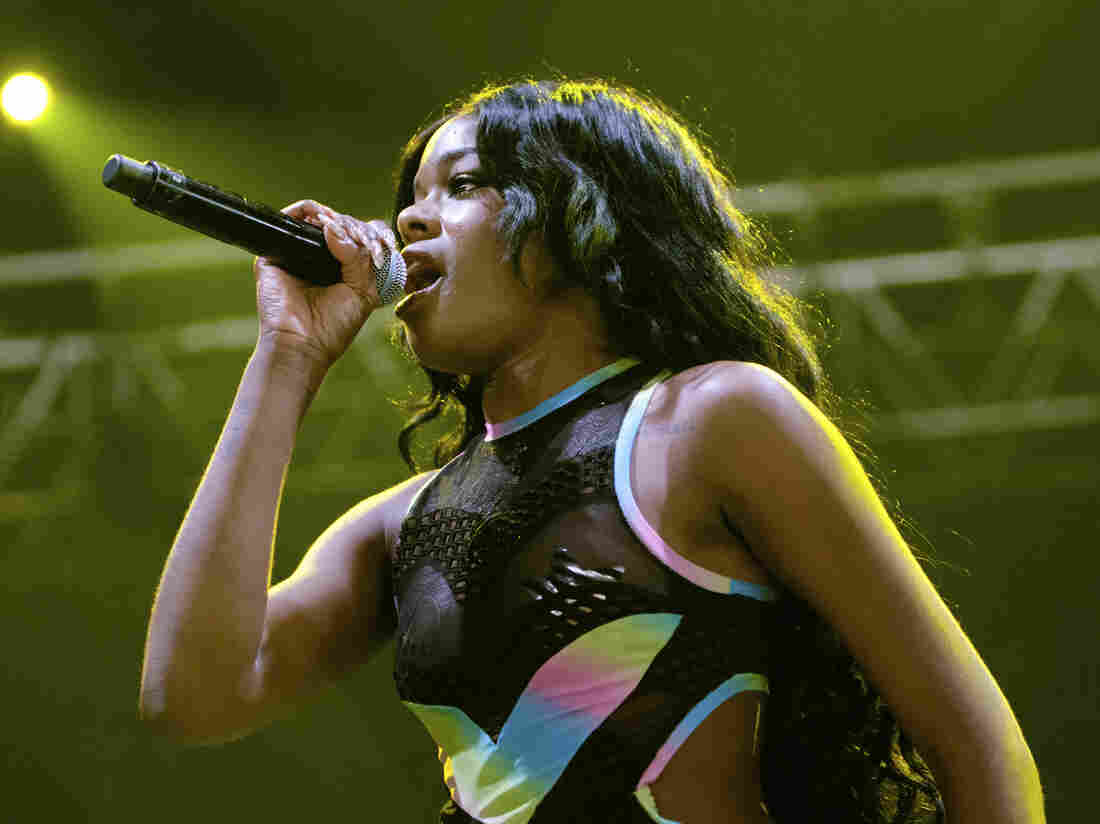 Azealia Banks' song "Gimme A Chance" is a reminder to Raquel Gutiérrez that revolutionaries love to dance, but not every Pride is a revolution. Katrine Emilie Andersen/AFP via Getty Images hide caption 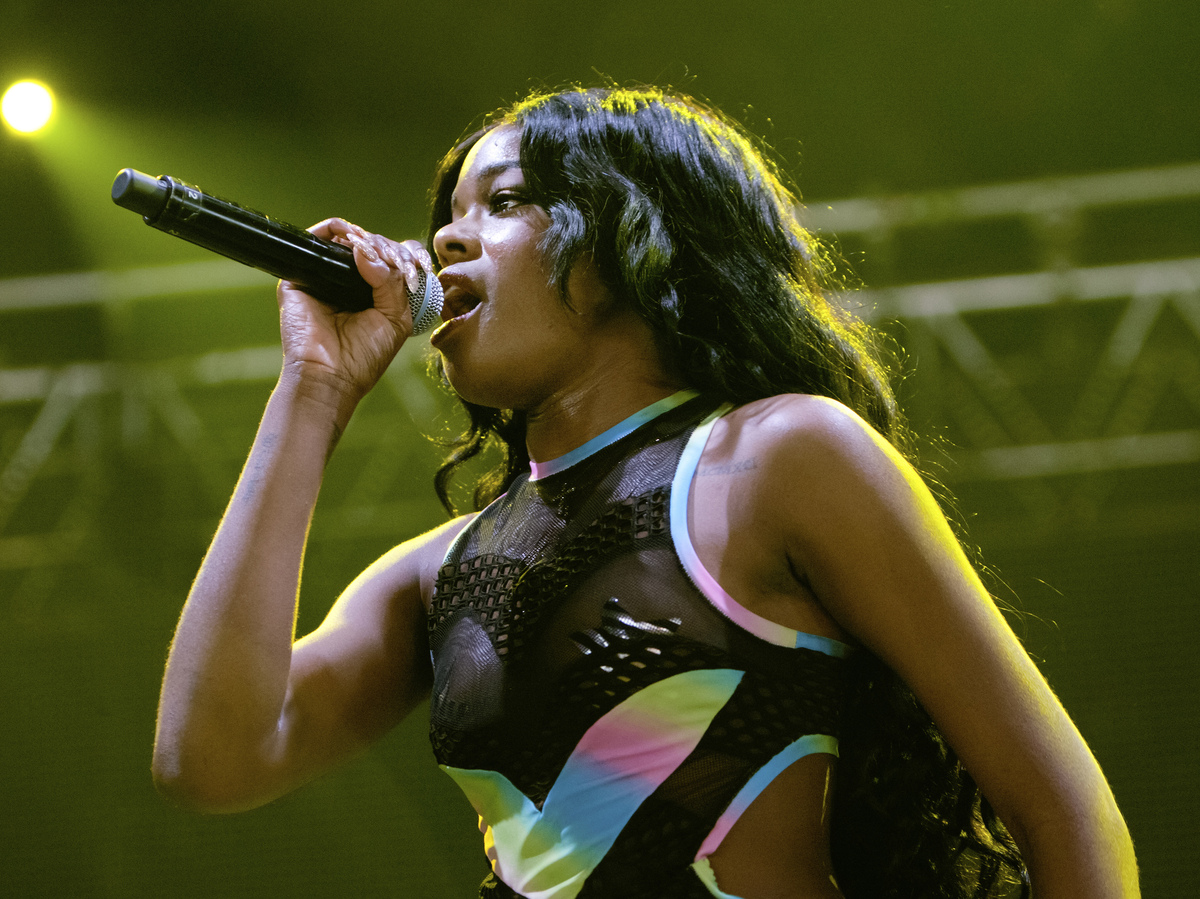 Azealia Banks' song "Gimme A Chance" is a reminder to Raquel Gutiérrez that revolutionaries love to dance, but not every Pride is a revolution.

To help us unpack Pride 2020, we've gathered a collection of testimonies from music critics and scholars from the LGBTQ+ community. Each writer will discuss their relationship to Pride in this current moment and the role music plays in it, which will be gathered in a playlist at the end of the week. In today's entry, critic and poet Raquel Gutiérrez reflects on the relationship between Pride and protest, and shares some music that reminds us of Pride's political power.

I call myself a Stonewall baby since I, like Pride, was also born June 28. I spent half a dozen birthdays on picnic blankets in Dolores Park as I waited to take my place in the infamous San Francisco Dyke March: each year, a new cake and a new awakening to the privileges we had not recognized the years before. I came out in an era where the villain in our lesbian story was the white straight cis-male. The last Dyke March I attended featured shouting matches between locals and gaycationing dykes demanding transphobic out-of-towners not police others who didn't fit the category. Identity dictated the ways we occupied public space, but exalting my deep lez identity wasn't enough for me to participate in anything with an exclusionary policy. The following year ushered in the Trans March, the Friday takeover of Dolores Park. It soon became my favorite part of San Francisco Pride.

It's been hard to do Pride anywhere else. West Hollywood is where rainbows decorate police cars 365 days every year. But just a year after the Internet broke Dan Savage's advice to young queers with "It Gets Better," SFPD made a video featuring all of the gay and trans cops on the force. "What did queerness mean anymore if the cop who shoots you in the back is an Escape from Alcatraz tri-athlete dyke," I would wonder aloud in a status update to others similarly outraged. Was this progress? I moved to San Francisco for a few years to work in one of its contemporary art centers and my nightlife was brimming with every queer and trans incarnation. It was a privilege to live in a city where my queerness never threatened my quality of life. That comfort can be seductive if it weren't for the nervous system-wrecking anxiety of sharing counter space at the gay bar with queer and trans off-duty cops cruising the same babes and high-fiving the tatted barkeeps. Was this the cost of peace of mind?

When I left the Bay Area five years ago, I left behind the desire to attend another Pride. What was the point? The lesbian bar was no more. Beer companies and credit card logos bathed in the rainbow Kool-Aid I didn't want to sip from anymore. And cops marched in the parade that celebrates the history of a movement started by marginalized patrons of a West Village bar brutalized by the police. I stopped going to Pride just as the debate as to whether or not cops should be allowed in parades and other Pride-related events began to catch fire. Black Lives Matter in Toronto staged a sit-in protest at the 2016 parade (they were the guests of honor that year).

These actions remind me that our most reliable teacher is indeed history. That it took 50 years for the top brass at NYPD to admit to creating violent conditions for the people seeking comfort and conviviality in the smoky bars of the West Village doesn't earn a ticket to the rainbow party. This apology placates those affluent members of the LGBT community who now own the properties police are hired to protect from young Black queer and trans youth who have frequented Christopher Street since the late 1990s. Darnell Moore offered a necessary and critical narration of the gentrification of West Village queerness last year for The Nation.

Moore ignites my own memory of living in Brooklyn in the early 2000s, where organizations like Audre Lorde Project and the Silvia Rivera Law Project were already imagining a future where young queer and trans people from Black and Latinx communities could thrive with access to the same fiscal resources as the entities that threaten them daily with the deadly specter of stop-and-frisk. Today, those visions have buoyed the younger generation of activists and organizers who arrive to policing the way they arrive to the gender binary—ready to dismantle it.

I feel those energies from my students in a class I taught this quarter called Queer Aesthetics. My students raised themselves on the consciousness-raising culture Tumblr availed to them. We Zoomed through José Esteban Muñoz's writing of queer performance artists who emerged from the catacombs of the AIDS pandemic into a late-'90s ambivalent saturnalia. We surmised that to survive a plague requires calling on history's lessons—that ACT UP demanded access to healthcare — and aggregated those lessons to intersect the material ways the U.S. medical system continues to fail Black people, who are dying at higher rates of COVID-19. We ended the quarter on Pride month's doorstep, where the clubs are closed but the streets are alive again. I had students who told me they were leaving the Zoom early to go protest. And I thanked them for letting me know.

I tempted fate as a broke-yet-indignant androgynous, brown art-punk who snuck into their fair share of corporate Pride events in Southern California. Yet my real mistakes came from assuming nostalgia for history and sex for solidarity. Pride is seductive that way if you're not careful and a playground for your politics if you are. But one thing is certain — Pride is Political. And as Emma Goldman reminds me obliquely enough: Revolutionaries love to dance, but not every Pride is a revolution. The songs below score various avowals and failures in the quest for queer communists and weirdo anarchists and the ideological promiscuities they share with gusto.

Raquel Gutiérrez is a 2017 recipient of the Creative Capital/Andy Warhol Foundation Arts Writers Grant. Their poetry and essays have appeared or are forthcoming in Los Angeles Review of Books, The New Inquiry, FENCE, The Georgia Review, and Places Journal. Raquel's first book of prose, Brown Neon, a series of essays that examines what it means to be a Latinx artist in the Trump era and will be published by Coffee House Press in 2021.

This is the third entry in a week-long series of letters by music writers in the LGBTQ+ community. Read the next letter here.