Accessibility links
What Schools Can Learn From Child Care Coronavirus Safety Plans The Y, and New York City's Department of Education, have been caring for tens of thousands of children during the pandemic. Neither has had reports of coronavirus clusters or outbreaks.

Listen · 3:46 3:46
What Parents Can Learn From Child Care Centers That Stayed Open During Lockdowns 3:46 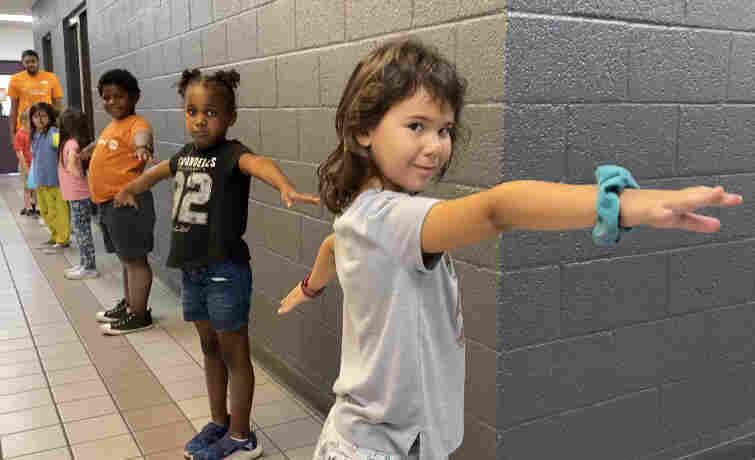 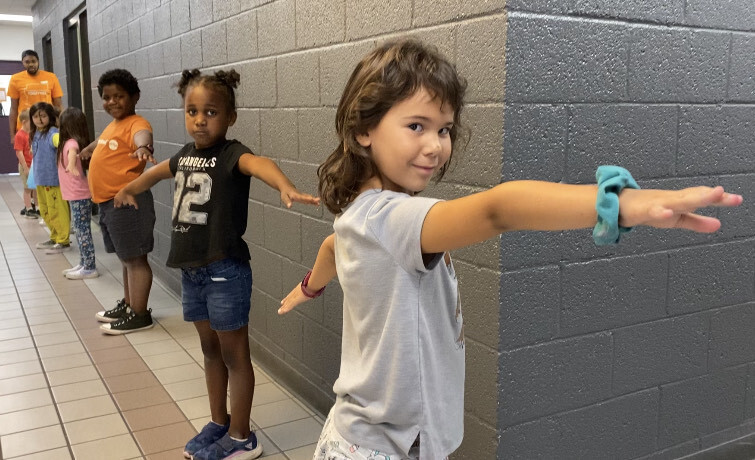 To help with social distancing, children at Valley of the Sun YMCA sites in Arizona were taught to make "airplane arms" when standing in line.

Valley of the Sun YMCA

When Arizona schools shut down in mid-March to prevent the spread of the coronavirus, Tatiana Laimit, a nurse in Phoenix, knew she needed a backup plan. Laimit is a single mother of a 6-year-old girl and had recently relocated to the area. She didn't have any friends or family nearby to ask for help.

It was past 8 on a Friday night when she shot off an email to her local YMCA to ask if they were providing emergency care for the children of front-line workers. "And immediately [someone] responded and let me know, 'Yes.' "

Throughout the pandemic, many child care centers have stayed open for the children of front-line workers — everyone from doctors to grocery store clerks. YMCA of the USA and New York City's Department of Education have been caring for, collectively, tens of thousands of children since March, and both tell NPR they have no reports of coronavirus clusters or outbreaks. As school districts sweat over reopening plans, and with just over half of parents telling pollsters they're comfortable with in-person school this fall, public health and policy experts say education leaders should be discussing and drawing on these real-world child care experiences.

The Y says that during the lockdowns it cared for up to 40,000 children between the ages of 1 and 14 at 1,100 separate sites, often in partnership with local and state governments. And in New York City, the pandemic's national epicenter in March and April, the city's Department of Education reports that it cared for more than 10,000 children at 170 sites.

Working in early days, and on very short notice, these two organizations followed safety guidance that closely resembles what's now been officially put out by the Centers for Disease Control and Prevention. The Y says a few staff members and parents at sites around the country did test positive, but there are no records of having more than one case at a site. This, among a population of essential workers.

In a separate, unscientific survey of child care centers, Brown University economist Emily Oster found that, as of Tuesday afternoon, among 916 centers serving more than 20,000 children, just over 1% of staff and 0.16% of children were confirmed infected with the coronavirus.

The Y emphasized to NPR that its data is not comprehensive, and the availability of testing has varied across the country. But experts say it's worth taking these low numbers into account. 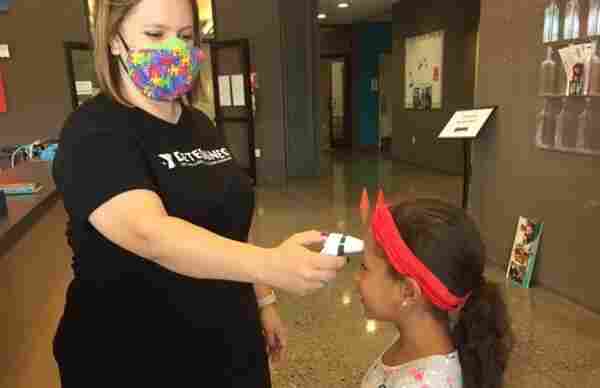 "There are almost no recorded cases of child-to-adult transmission of COVID-19," says Elliot Haspel, an education policy expert and child care advocate who wrote an op-ed arguing for reopening full-time child care and schools as soon as possible. "It's not zero risk, [but] we're acting with a March 2020 understanding of COVID-19 and kids, and not with a June 2020 understanding of COVID-19 and kids."

In March, the CDC had yet to issue its official guidance about how to safely operate schools or group child care. And yet, the protocols that the Y and New York City came up with were strikingly similar to the CDC's May recommendations, as well as guidelines now being considered by states and districts.

In order to slow the spread of illness, local YMCAs and New York City grouped "pods" of no more than nine children with each adult. Heidi Brasher of the YMCA of the USA says this often meant using spaces such as basketball courts or even boardrooms, taking advantage of buildings that were otherwise closed. "They were very creative in the way they utilized space," Brasher says.

5 Radical Schooling Ideas For An Uncertain Fall And Beyond

Pods didn't mix, but social distancing and use of masks weren't necessarily observed within each pod, especially with very young children — the Y cares for children as young as 1 year old.

Brasher says her organization consulted with the CDC to create a "quick start" guide for each location around the country to get up and running with emergency child care, going over everything from morning check-in procedures to food prep.

They did temperature checks and symptom screenings on each child coming in each day, with staff members wearing masks, gloves and gowns where available. Children with symptoms were urged to stay home.

Staff came up with creative ways to reinforce frequent and thorough hand-washing. Libby Corral is chief operating officer of the Valley of the Sun YMCA, which operated nine emergency child care sites across Arizona (this month they expanded to regular camp programming). She says that at the beginning of each 30-minute activity, such as sports or craft time, children get a stamp or marker doodle on their hands, which they have to wash off before moving on to the next activity.

"We were teaching them not just 'rinse your hands,' but 'scrub them.' And instead of having to dread washing their hands, they were able to get excited and laugh and have fun while they were doing that."

They also reinforce social distancing by having the kids make "airplane arms" when they're standing in line or moving from place to place. And children get their own materials, such as art supplies, to use from day to day, rather than sharing. Having individual materials worked so well, says Corral, that they plan to make it a policy in the future. 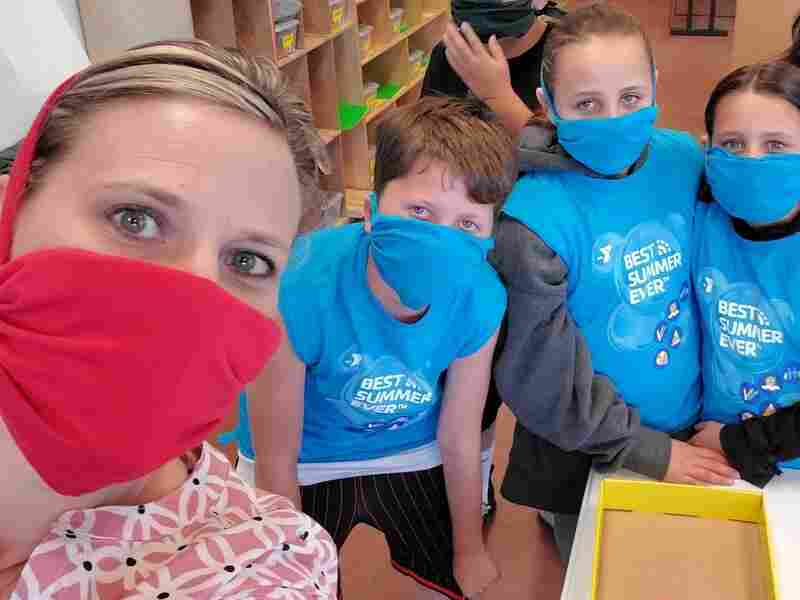 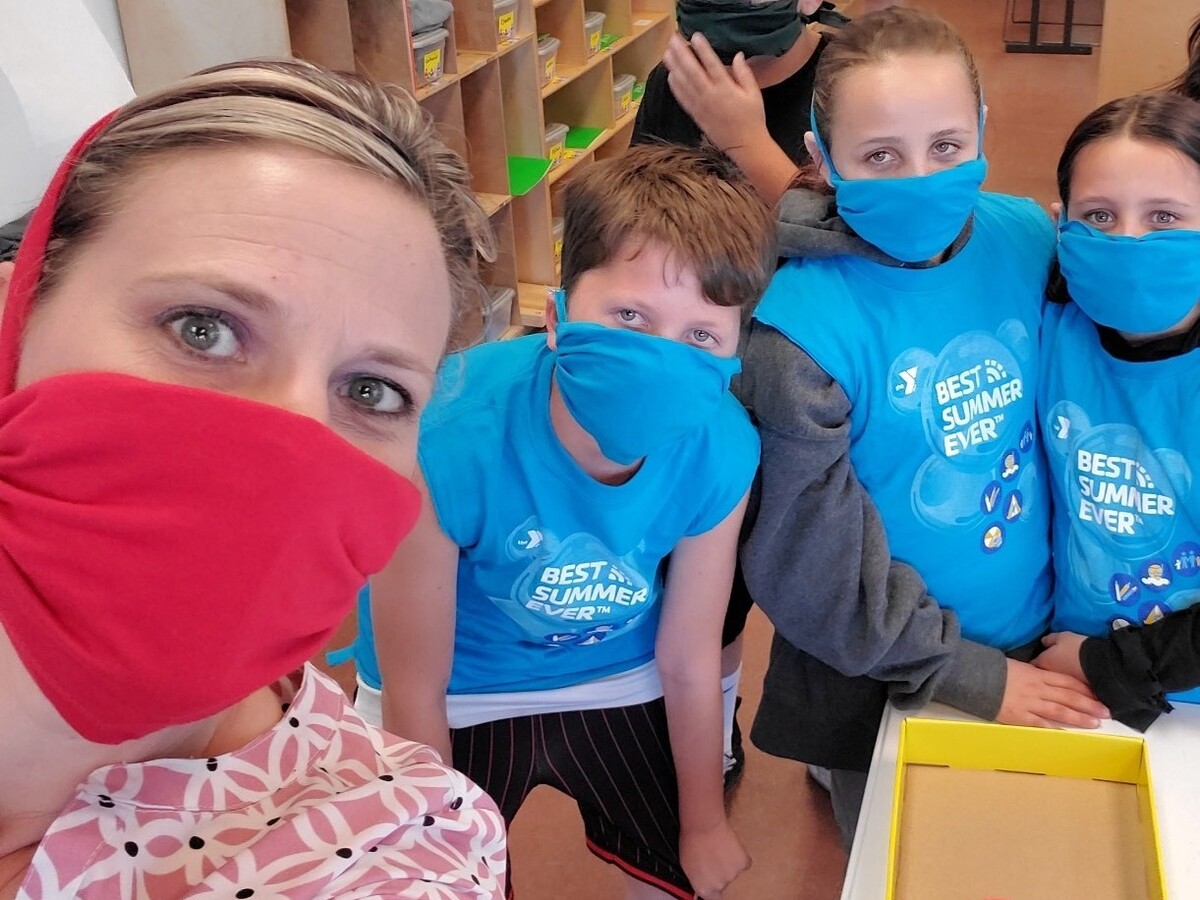 A Valley of the Sun YMCA staff member poses with children after a craft project that involved making face masks.

Valley of the Sun YMCA

Of course, running things this way is expensive. Even after emergency state aid, her YMCA locations ran at a deficit, Corral says.

In New York, which is still operating its city-run child care centers, the rules are similar, and in some ways stricter. Face coverings are mandatory for all, whereas children at YMCA sites aren't required to wear them. Social distancing is maintained as much as possible by everyone inside the building, reinforced with 6-foot-long posters of animals like sea turtles. And daily temperature checks of everyone coming in the building are done by school nurses, according to New York City Department of Education spokeswoman Katie O'Hanlon.

Officials with both organizations say they don't know of any clusters of cases associated with a site. Corral, in Arizona, says she knows of one case in which a staff member, who didn't work directly with children, tested positive, and another case in which a parent called in and volunteered to self-quarantine after an exposure.

Not having to worry about my daughter and her safety ... it's a savior for me. It's a weight off of my shoulders.

Laimit, the nurse in Phoenix, credits the Valley of the Sun YMCA with "really great communication," both about health practices and her daughter's social and emotional needs.

"It takes a weight off of me as a parent, because when I'm at work, especially providing care for others — and it's absolutely chaotic right now, Arizona is on the rise with their COVID cases — not having to worry about my daughter and her safety ... it's a savior for me. It's a weight off of my shoulders."

"There are ways to substantially reduce the risks"

Should parents across the country stop worrying about sending their kids off to camp and school, as long as a version of these guidelines is followed?

Dr. Joshua Sharfstein at the Johns Hopkins School of Public Health says we can learn from the YMCA and New York City examples, but we shouldn't overgeneralize.

"These experiences illustrate that it's possible to bring kids together without a guarantee of an outbreak or a serious situation developing," he explains. On the other hand, they don't guarantee the opposite.

Sharfstein agrees it's OK to extrapolate — not only from essential worker child care in the U.S., but from the experiences of countries around the world where schools have already opened up. "There are ways to substantially reduce the risks when kids get together," he says.

He also agrees with Haspel, the child care advocate, in saying that "there is converging evidence that the coronavirus doesn't transmit among children like the flu — that it's a lower risk."

There are two related reasons for this, Sharfstein explains: One is that children seem to be less likely to get infected, and the second is that when they are infected they are much more likely to be mildly symptomatic or asymptomatic. If they're not coughing or sneezing, it's harder for them to spread the virus to others. The New Yorker reported that Iceland, which did extensive contact tracing, found only two examples of child-to-parent transmission.

A question of priorities

Sharfstein says there are still some really important things we don't know — and that we'd like to know — as group child care and schools start to open up. He cites a May report from the Johns Hopkins Center for Health Security. It calls for a national research agenda to quickly address the outstanding questions about children and the coronavirus. Among them, says the report:

"How vulnerable to severe illness are students who have underlying health conditions, such as asthma, diabetes, or severe obesity? How safe is it for adults who themselves have serious underlying health conditions? ... How safe is it for teachers, administrators, and other school staff? ... Are certain school communities at greater risk than others relative to exposure, and should each school community be evaluated independently to determine level of risk?"

And then there's the question of priorities. Among all the steps organizations are taking — hand-washing, masks, temperature checks, pods, social distancing, and guidelines about staying home if sick — which are the most important?

And crucially, how important is group size? The recommendation to keep groups of children small and separate imposes a particular burden on school districts. In most places, reducing class sizes means reducing in-person class time, staggering schedules and continuing remote learning in parallel with in-class instruction. That requires resources that not all students and schools have access to.

Right now, Sharfstein says, we just don't know how important it is to limit group size. "I think it's a failure that we haven't prioritized opening schools."

Prioritizing schools, he adds, means doing lots of research on children and the coronavirus as soon as possible to inform the right policies to put in place.