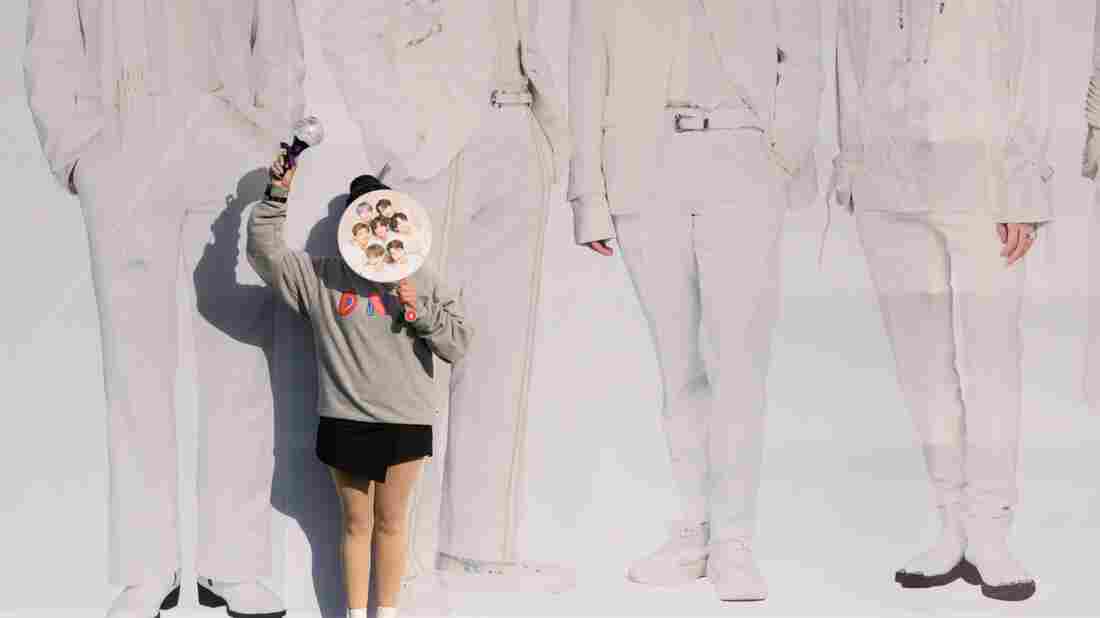 A fan of K-pop band BTS poses for photos against a backdrop featuring an image of the group's members in Seoul, South Korea, on Oct. 29, 2019. Ed Jones/AFP via Getty Images hide caption 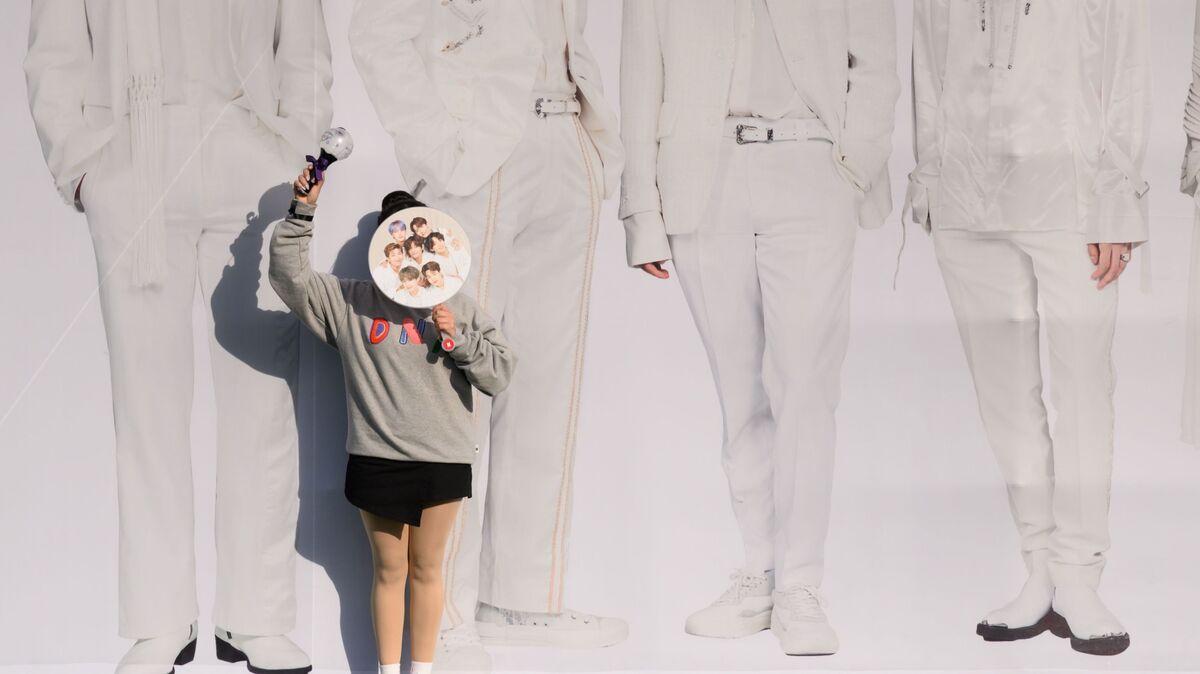 A fan of K-pop band BTS poses for photos against a backdrop featuring an image of the group's members in Seoul, South Korea, on Oct. 29, 2019.

A week before President Trump held his controversial campaign rally in Tulsa, Okla., was when Viviana Dark, a K-pop fan from Wisconsin (who has requested pseudonymity over concerns of online harassment), first heard of plans to "sabotage" the event. Users on TikTok, the exceptionally popular social-video platform, were urging others to reserve tickets to the rally, with no intention of actually going. "You know how a TikTok challenge happens? It was kind of like that. 'Everybody go do this!' And it spread like wildfire," Dark, 19, tells NPR Music.

She signed up for two seats, received a confirmation email from the Trump campaign — "I'm counting on my loyal supporters like you" — and never showed up to the rally, which drew just a few thousand supporters to the 19,000-seat auditorium on June 20.

It's not clear how much TikTok teens and K-pop fans should be credited for the rally's disappointing turnout; Trump's campaign originally claimed it received more than a million requests for tickets. A stage prepared for overflow was never used.

Dark, who supports the girl groups TWICE and GWSN, is no stranger to political activism in coordination with her K-pop community. She has a Twitter group chat with fellow idol fans from all over the world, where they exchange info about stars, petitions and hashtag movements. To "clog up" the platform, she tweeted #WhiteLivesMatter and #KeepAmericaGreat hashtags, coupled with irrelevant fancams of her favorite stars, as a way of diluting the usefulness and relevance of the tags.

"I'm Black before I'm a K-pop stan," she says. "The main point of why we were fighting was for the Black Lives Matter cause, not to get recognized [as K-pop fans]."

But getting recognized they are, as "maestros of social media," "an unexpected ally," "unlikely heroes." This month, fans of BTS matched the boy band's $1 million Black Lives Matter donation in roughly a day. Others are credited with flooding the iWatch Dallas app with fancams (and sinking its App Store ranking) after the Dallas police asked people to report "illegal activity" from the George Floyd and Black Lives Matter protests.

"I never thought I'd see the day where kpop stans are defeating the police," read one tweet that received over 4,000 likes.

"Why is this so surprising? If you know the people in the K-pop fandom, this [political activism] seems natural," says Lee Jeeheng, a cultural studies scholar and author of BTS and ARMY Culture, a book analyzing the fandom of the extremely popular group. "K-pop fandom is a digital tribe. Fans have been trained to mobilize quickly. They already have the infrastructure; when someone says, 'Go here!' everybody can run towards the target." 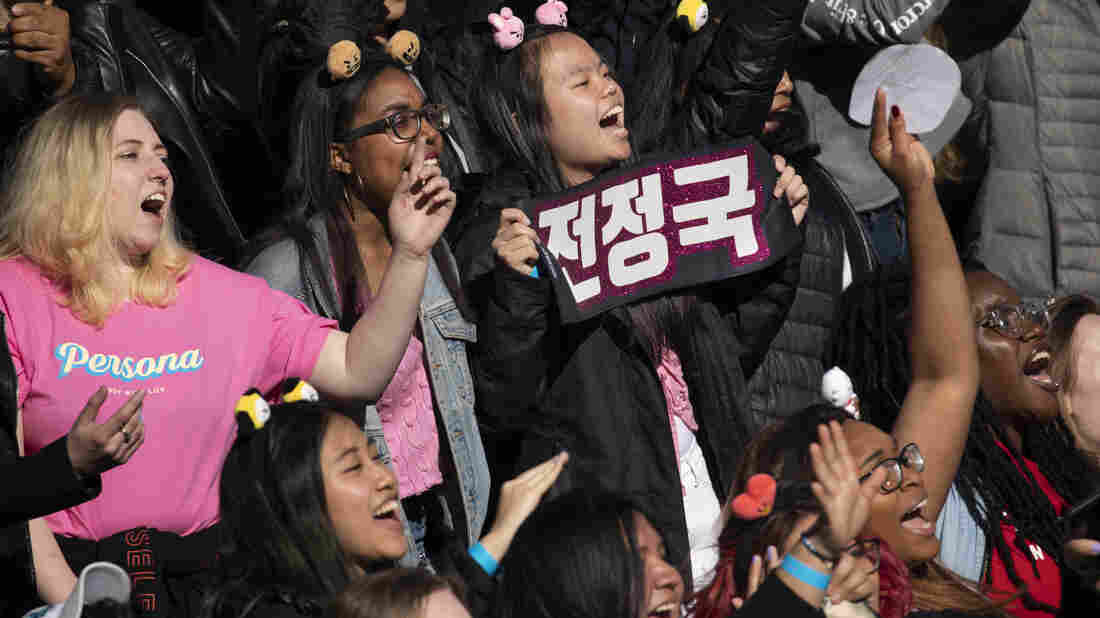 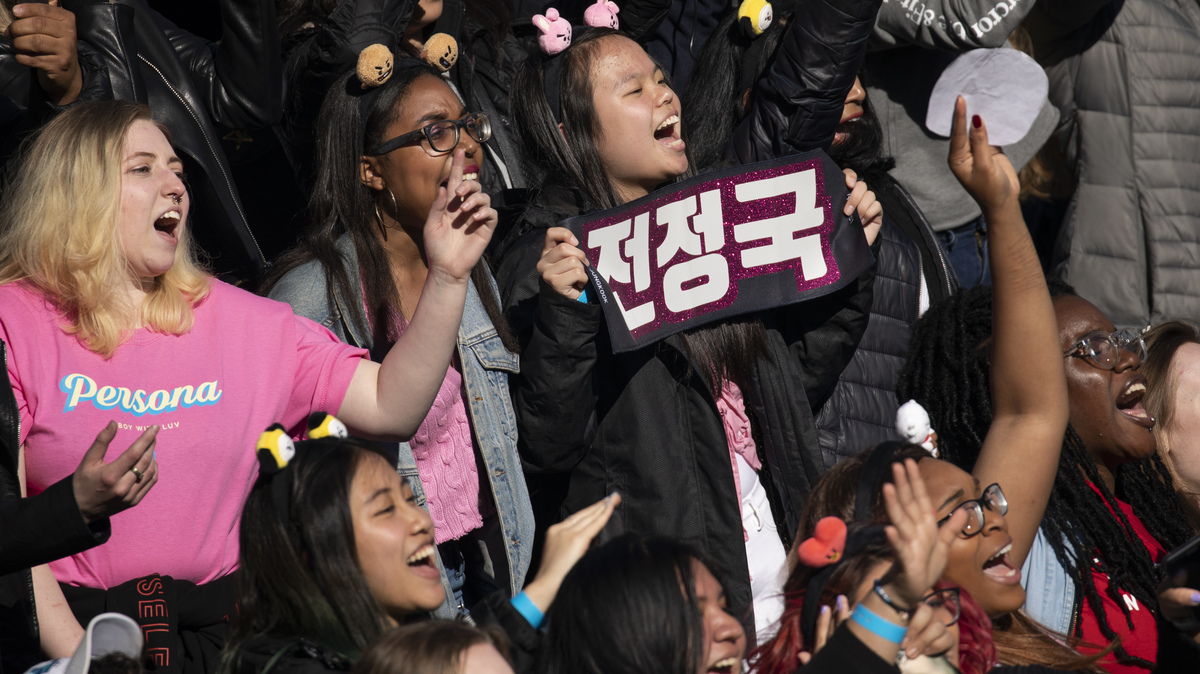 In the past, fans have donated to a London charity to fund over 35,000 meals, reportedly protested against the Chilean government in 2019 and raised awareness about the need for safer roads in Bangladesh.

This activism, while not practiced by every K-pop fan, has a long history. In South Korea, organized music fandoms began appearing in the 1980s and '90s. Fan philanthropy, now common in Korea beyond pop music, has its roots in the early 2000s. Fans of the "first generation" idol band Shinhwa, which debuted in 1998 and is still active, are credited with starting the "fan rice" trend in 2007, sending thousands of kilograms of rice to charity. Other fandoms have funded cochlear implants for deaf children and, more recently, COVID-19 efforts.

Within and across different fandoms, political awareness is shared through loose online networks on Twitter, Instagram, fan cafes, etc.

Scholar Lee, a BTS fan, remembers one instance: In 2018, BTS member Jimin wore a shirt depicting the U.S atomic bombing of Japan, after which fans became embroiled in contentious debates about Western imperialism and Japan's atrocities during World War II, including sexually enslaving women for its military. Multilingual fans furiously translated on Twitter, including Lee. "Fans from Southeast Asia started talking about their grandmothers who were sexually enslaved," she recalls. "It was an incredible history lesson. It was a really moving experience. I witnessed diversity and minority representation in action."

"Worldwide, K-pop is being consumed in the name of diversity politics," says Mimyo, the editor-in-chief of Idology, an online magazine specializing in K-pop idol music. "Most K-pop fans are already interested in diversity politics; combine this with K-pop fandom's culture of collective action. That's why K-pop's global fandom is participating actively in social movements like Black Lives Matter."

"To be a non-Korean K-pop fan is innately political, I dunno why anyone is still surprised that K-pop fans are political," tweeted Tamar Herman, a K-pop correspondent for Billboard.

Herman's and Mimyo's comments are part of a growing media narrative highlighting K-pop fans' political progressiveness. But the reality is more complicated.

For one, there are plenty of fans like Dionne Saville, who don't really engage in K-pop's political activities. "K-pop is not at all an inherently political act for me. It's just excellent music that crosses global boundaries. I enjoy the deeper cultural connection it brings," Saville, a 47-year-old BTS fan in Yorkshire, U.K., tells NPR Music.

For example, blackface, though less common now, has brought plenty of A-list idols under fire. Artists also frequently stylize themselves after Black culture, and many cite Black music as a central influence.

"Traditionally, K-pop has not been a space that has validated Black feelings about those choices," writes Natasha Mulenga for Teen Vogue, "despite the impact Blackness has had on an industry that was reported at $5.4 billion ... in 2018."

Within the fandom, plenty of Black fans have voiced concerns about being gaslighted by other fans when bringing up racism.

"It feels really hard to be a POC in K-pop," says Dark. "When some fans try to talk about internal racism or even cultural appropriation, it kind of gets pushed under the bed. People of color are shushed by other K-pop fans."

That's why, for Dark, some K-pop fans jumping in online to support the Black Lives Matter movement feels hollow. "Some people's gestures of 'being an ally' feels performative, like it's just on a surface level."

"Being a K-pop fan causes me lots of drama and issues mentally, because of the racism. But I feel it's almost worth it to have that connection to the world, to music, to all these different ideas. K-pop helps me learn about the world."

Meanwhile, many K-pop artists have spoken out on Black Lives Matter — a rare sight, since unlike many of their fans, most artists refrain from making political statements in public.

Haeryun Kang is a freelance journalist based in Seoul, South Korea, and the creative director of videocusIN, a media incubator.