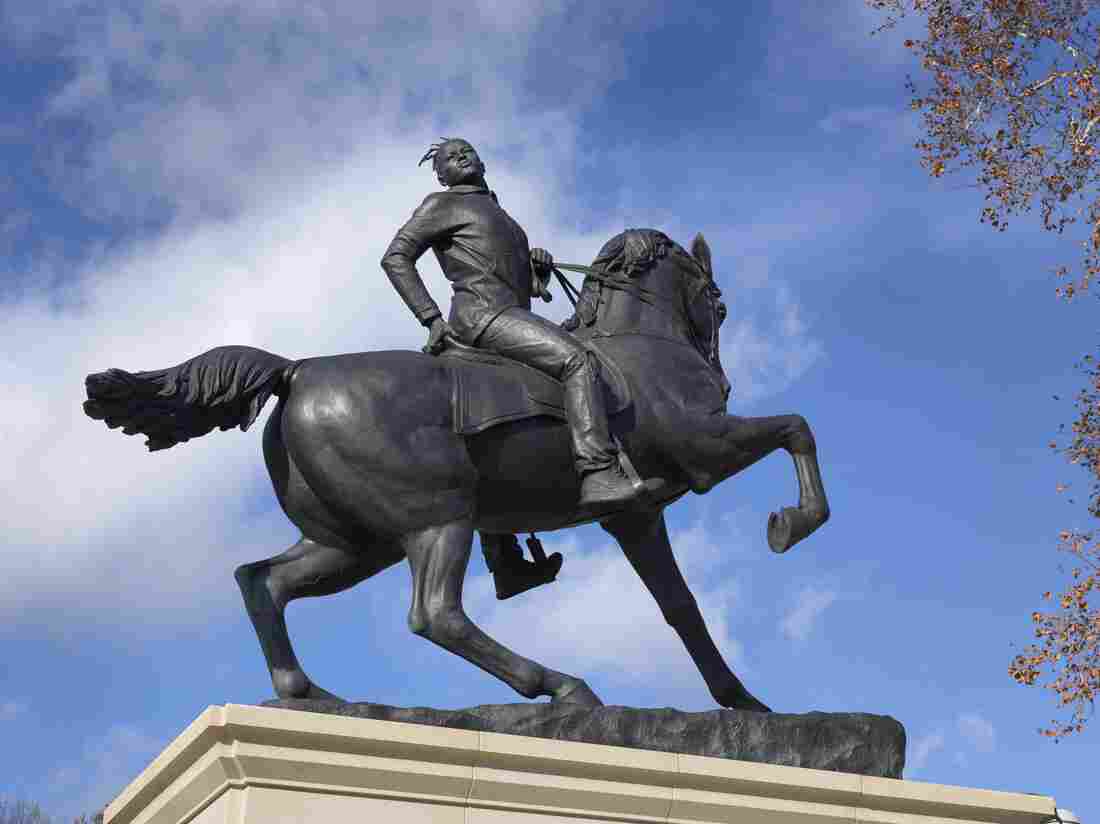 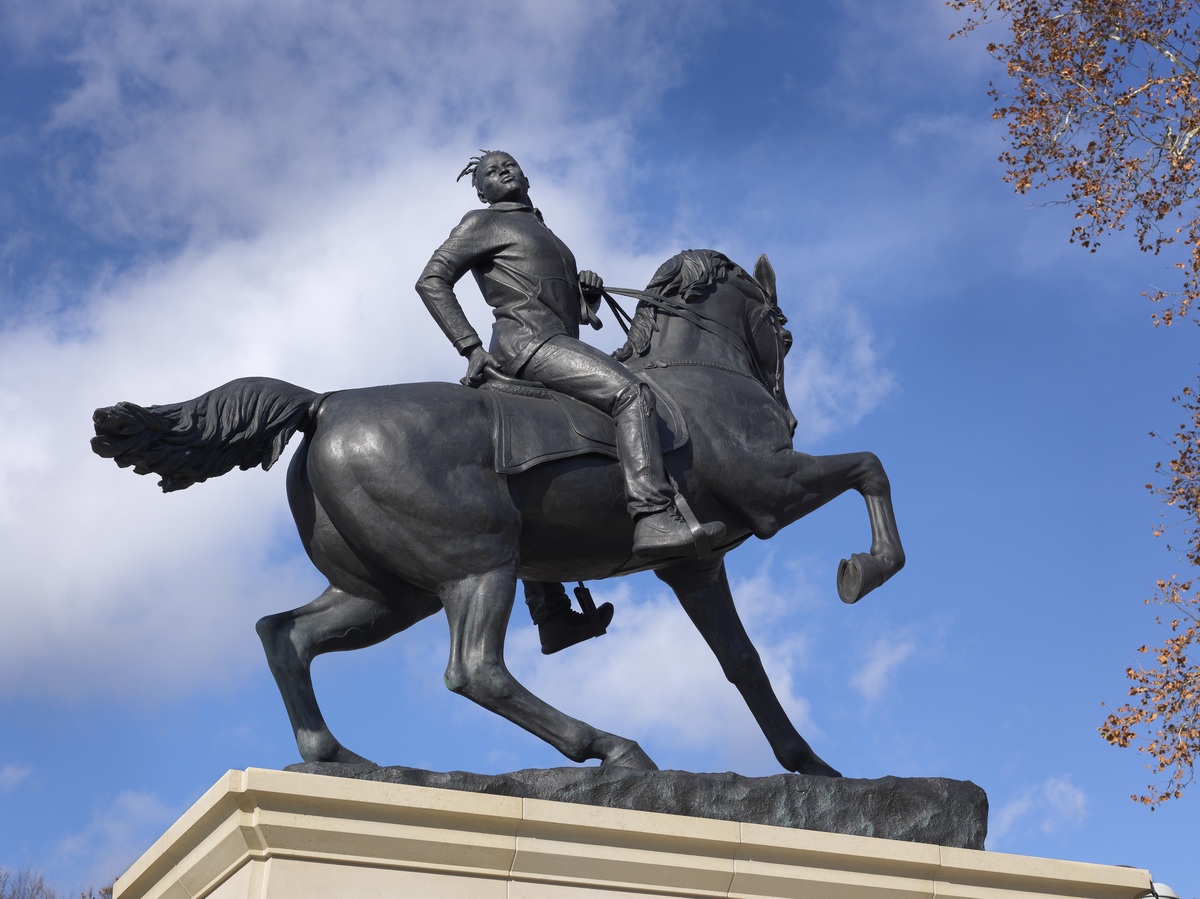 Kehinde Wiley created Rumors of War in response to the line of Confederate statues on Monument Avenue in Richmond, Va.

It's raining statues all across America. Artworks that have stood in public places for generations are being defaced or deposed, destroyed or relocated, as Americans confront attitudes on race and stereotyping. 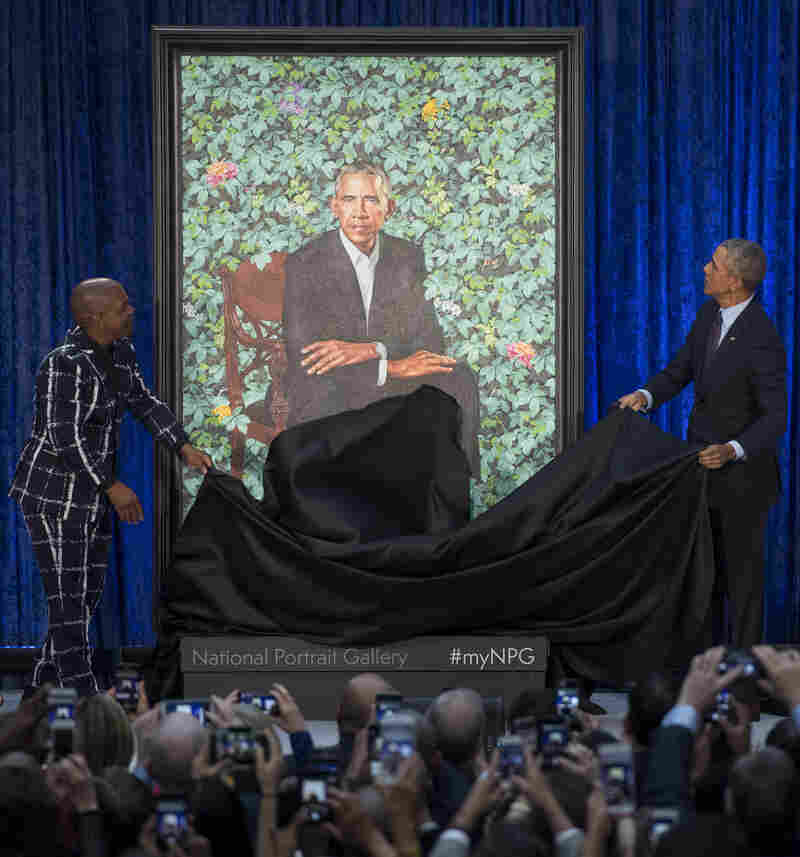 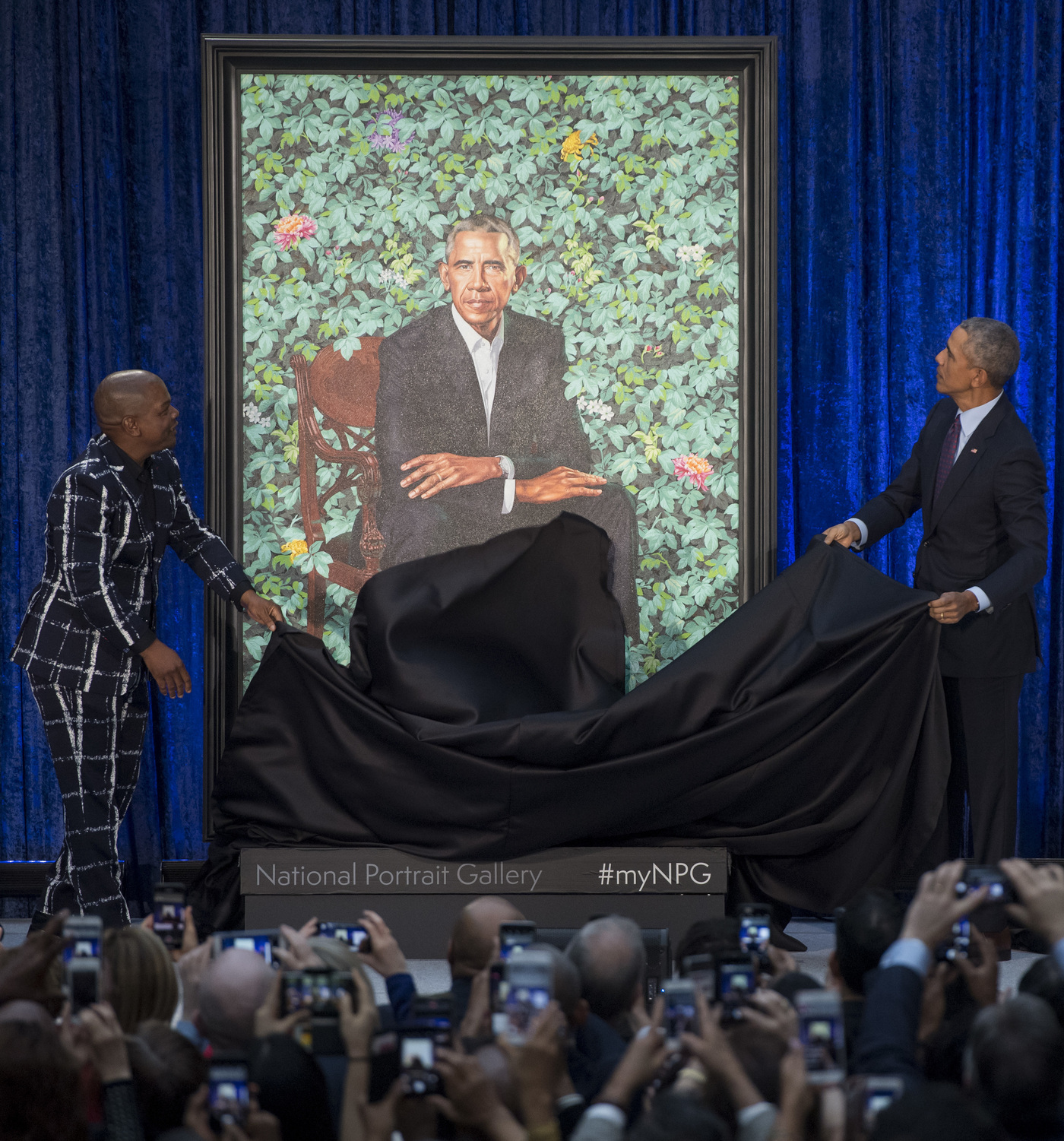 Richmond, Va., has been an epicenter of the controversy. Its most prominent city symbols — a procession of sculpted Civil War leaders — just sparked protests for days. The statues stand near the Virginia Museum of Fine Arts, where a contemporary sculpture by Kehinde Wiley reminds that Black lives not only matter, they can create powerful, stunning works of art. Wiley, a 43-year-old African American artist, is best known for painting an official portrait of President Barack Obama at the National Portrait Gallery.

We'll get to Wiley's Richmond sculpture in a minute. First, about the city's older sculptures — reminders that Virginia's capitol was once the capitol of the Confederacy. Monument Avenue there is a leafy, elegant, tainted thoroughfare that's been a source of controversy for decades. Its rows of fine houses and trees flanked a strip of five Lost Cause statues. Massive equestrian sculptures of the South's Confederate heroes, mostly generals. 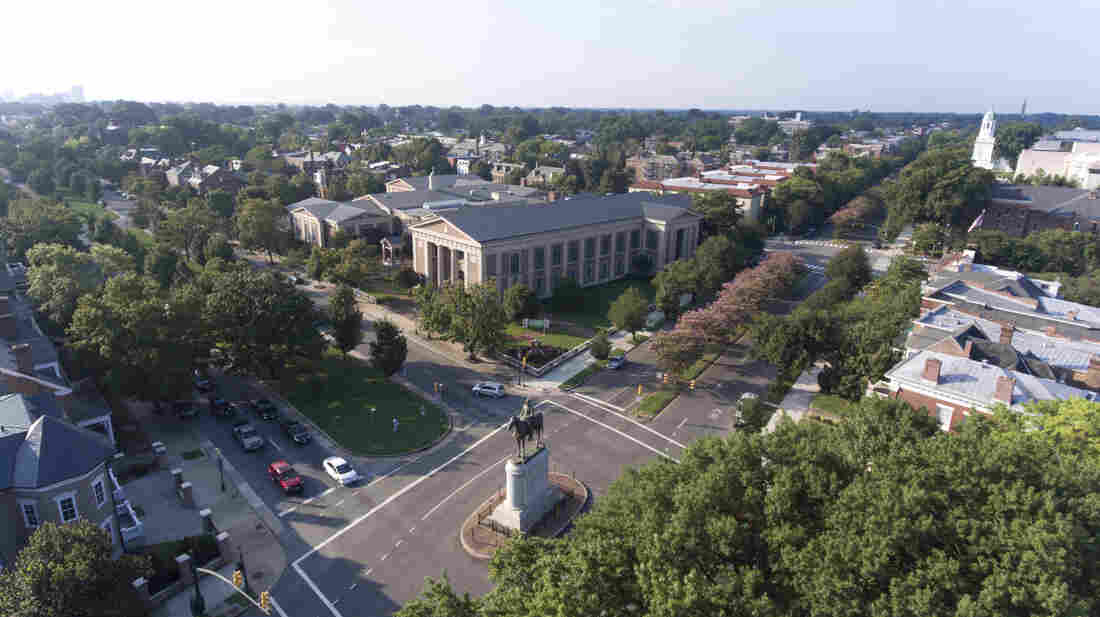 In early June, protesters tore down the statue of Jefferson Davis, President of the Confederacy. Its looming base was covered with colorful graffiti, and African American families posed proudly in front of it. 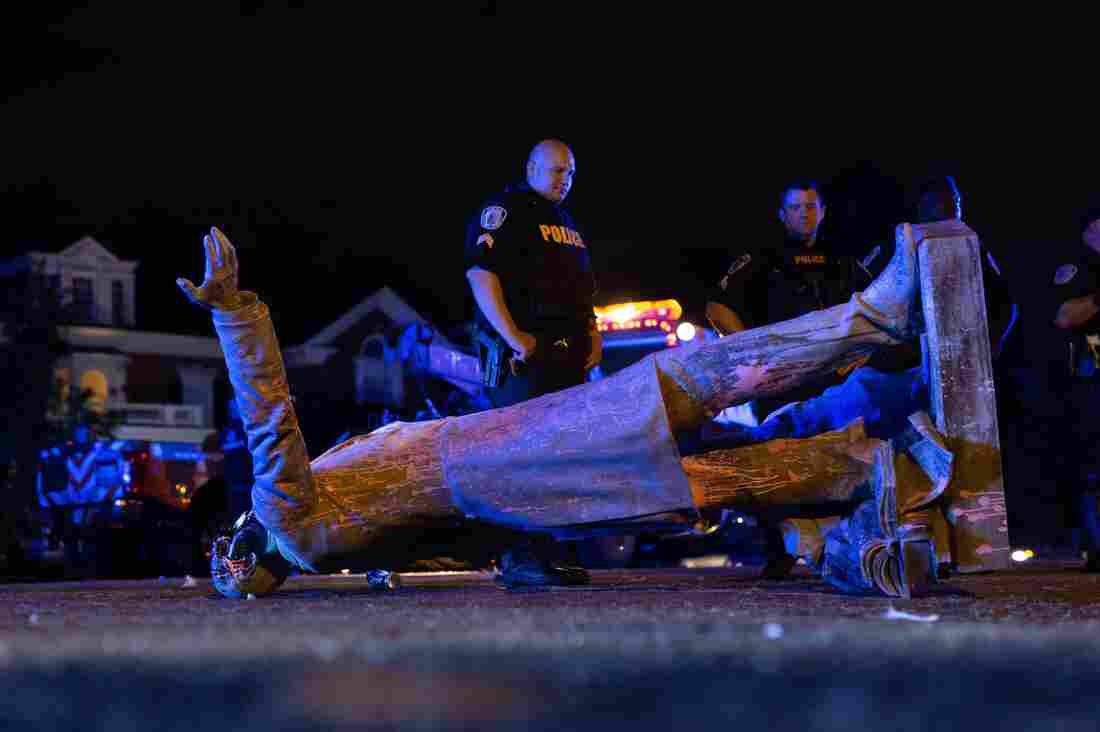 A statue of Confederate States President Jefferson Davis lies on the street after protesters pulled it down in Richmond, Va. Parker Michels-Boyce/AFP via Getty Images hide caption

At the end of Monument Avenue's row of white Confederates is a single sculpture of an African American man. It's the late tennis champion Arthur Ashe, a Richmond native. Ashe holds a tennis racket in one hand, a clutch of books in the other. His arms are raised, as if facing the future armed with education and athletic might. In late June, that statue was caught in this American agony. The base was sprayed, first with WLM, for White Lives Matter, then BLM, Black Lives Matter. That graffiti was quickly cleaned away. 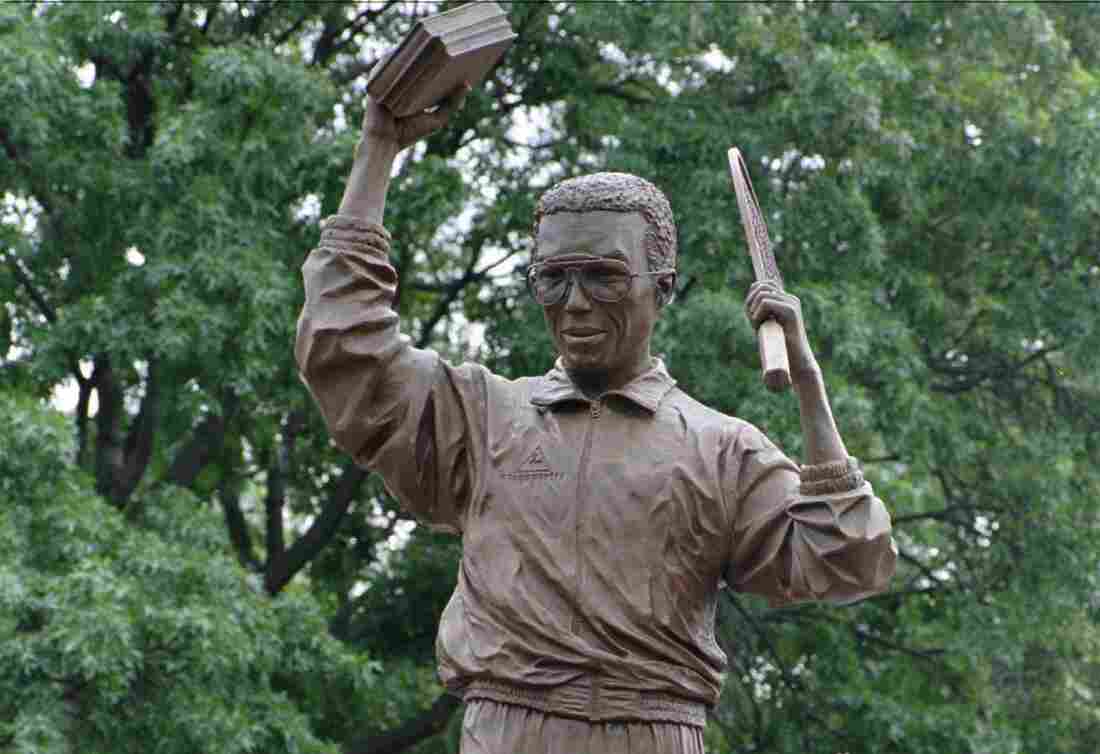 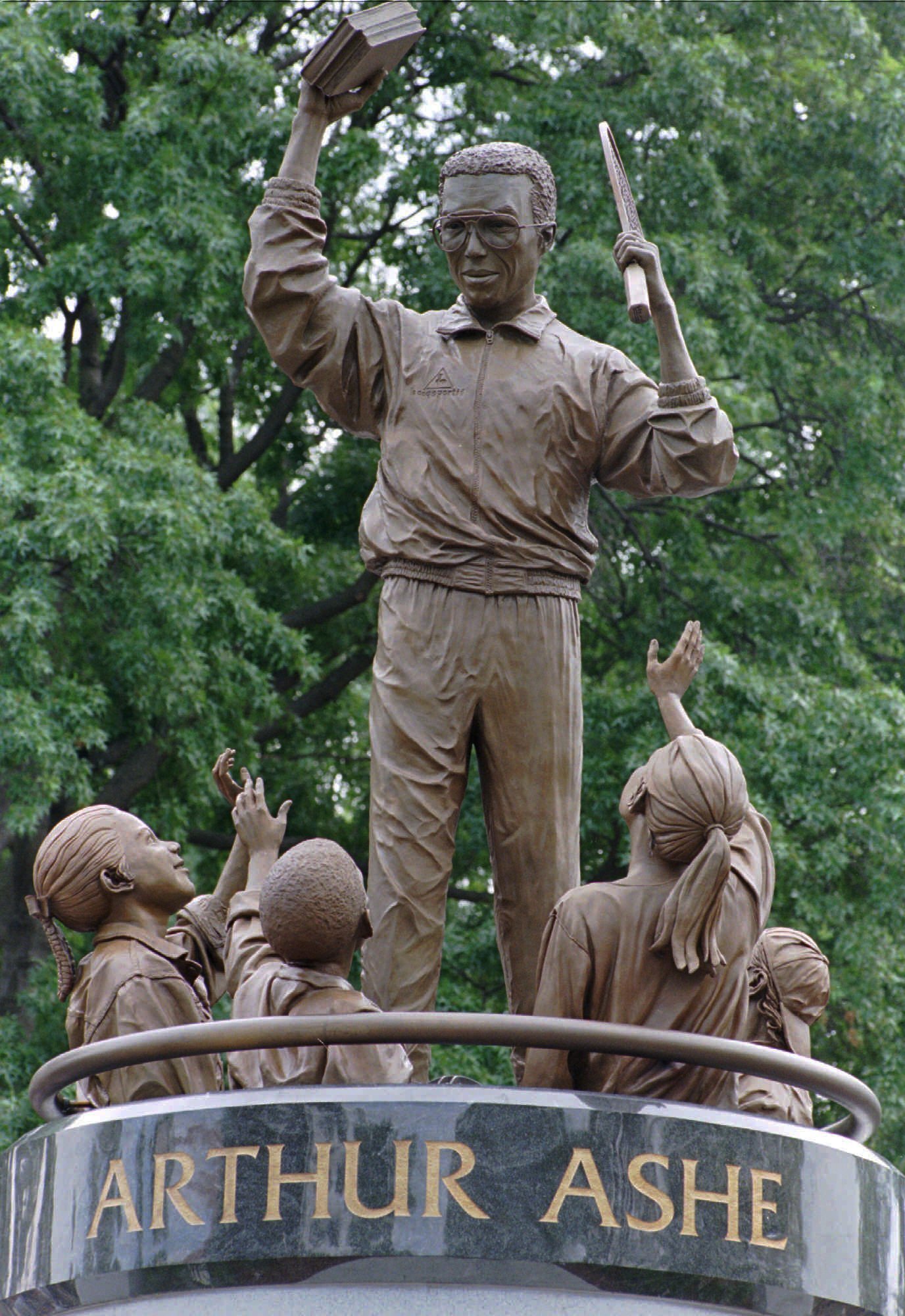 Paul Di Pasquale's statue of Arthur Ashe was unveiled on Monument Avenue in Richmond, Va., in 1996.

When the Ashe bronze went up in 1996 there was controversy. And controversy again when a much newer sculpture was installed near the other end of Monument Avenue just last December. Rumors of War by Kehinde Wiley stands in front of the Virginia Museum of Fine Arts. The museum commissioned it. 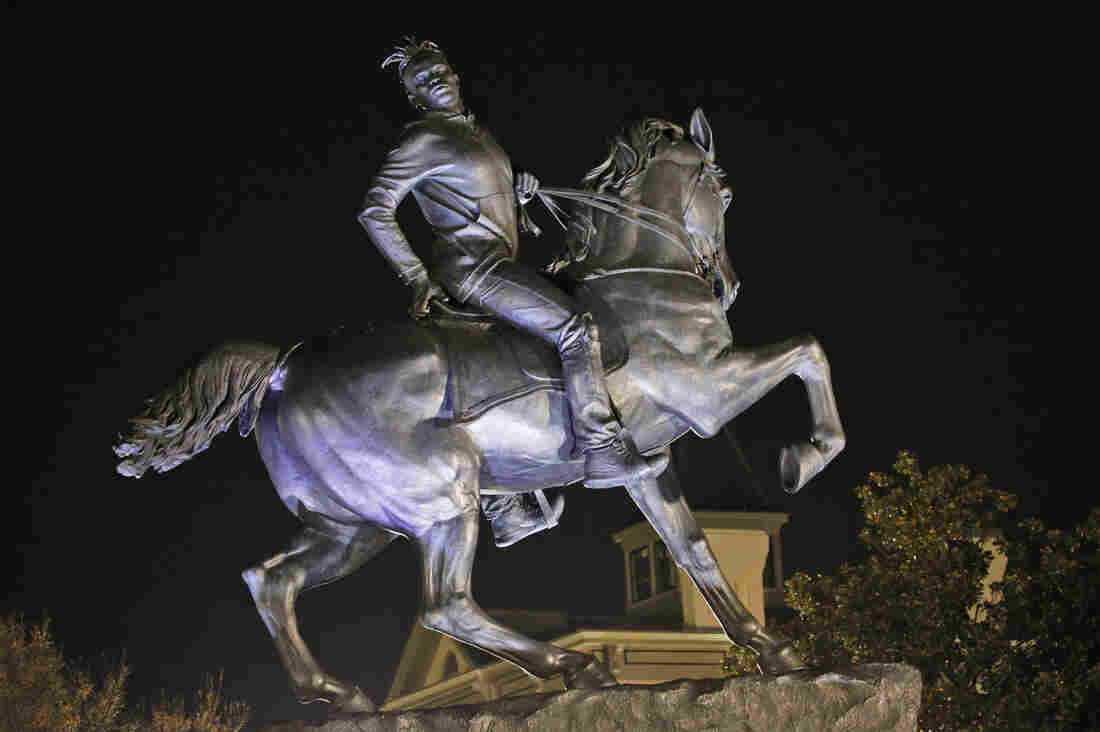 The name Rumors of War is from a biblical passage Matthew 24:6: "You will hear of wars and rumors of wars, but see to it that you are not alarmed. Such things must happen, but the end is still to come." Steve Helber/AP hide caption

This is no general. No tennis champ. It's a young, vibrant, heroic, African American equestrian with dreadlocks, Nike high-tops and torn jeans. The rider sits on the horse proudly, with determination. And there, on Arthur Ashe Boulevard steps from Monument Avenue with its demonstrations and vandalizations, this sculpture has been unharmed. Protesters gathered there to meditate and pay their respects to victims of police brutality. Throughout peaceful and sometimes violent protests, Wiley's bronze rider stands his ground.

The Virginia Museum of Fine Arts re-opens to the public on July 4. But if you're in the neighborhood, you can see this majestic outdoor work any time. And, any time, online you can see a Wiley painting in the museum's collection. 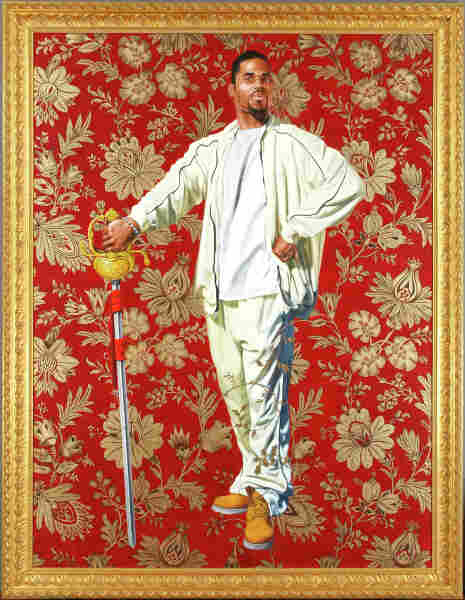 Wiley made his mark with works like this — portraits of every day people whom he paints like Baroque nobles. "I was trained to paint the body by copying the Old Master paintings, so in some weird way this is a return to how I earned my chops — spending a lot of time at museums and staring at white flesh," Wiley explains. His modern-day models are "assuming the poses of colonial masters, the former bosses of the Old World."

The Virginia Museum of Fine Arts exhibited Wiley paintings in 2016. When he came to Richmond for the opening, they asked what paintings he admired in their collection. He picked John Singer Sargent's early (1884) full-length portrait of Mrs. Albert Vickers, the wife of a wealthy patron.

Wiley spoke about the appearance of "elegant effortlessness" in Sargent's brushwork — how his silk-smooth surfaces are achieved by layers of paint, wiped out, re-painted. And he says he sees "the vocabulary of imperial domination" there, too.

(Watch the video to hear more of his reactions to Sargent — also to admire Wiley's sartorial style! )

A 21st-century, African American painter and sculptor, whose works speak to race and racial consciousness, forcefully using the styles of earlier masters to express his contemporary sensibility. Intriguing that he picks a work by the leading society painter of his day — John Singer Sargent, a virtuoso Edwardian — those rule-riddled Downton Abbey days so far from our own unsettling struggles.

Next time, there's peace and quiet online from the Asian Art Museum of San Francisco. But protest from a local activist over charges of antisemitism and racism against its patron.