Accessibility links
Dolphins Can Learn New Fishing Tricks From Their Pals Scientists have found that dolphins learn a neat trick to trap fish by watching their close associates do it. This means that dolphins aren't just motivated to learn from their mothers. 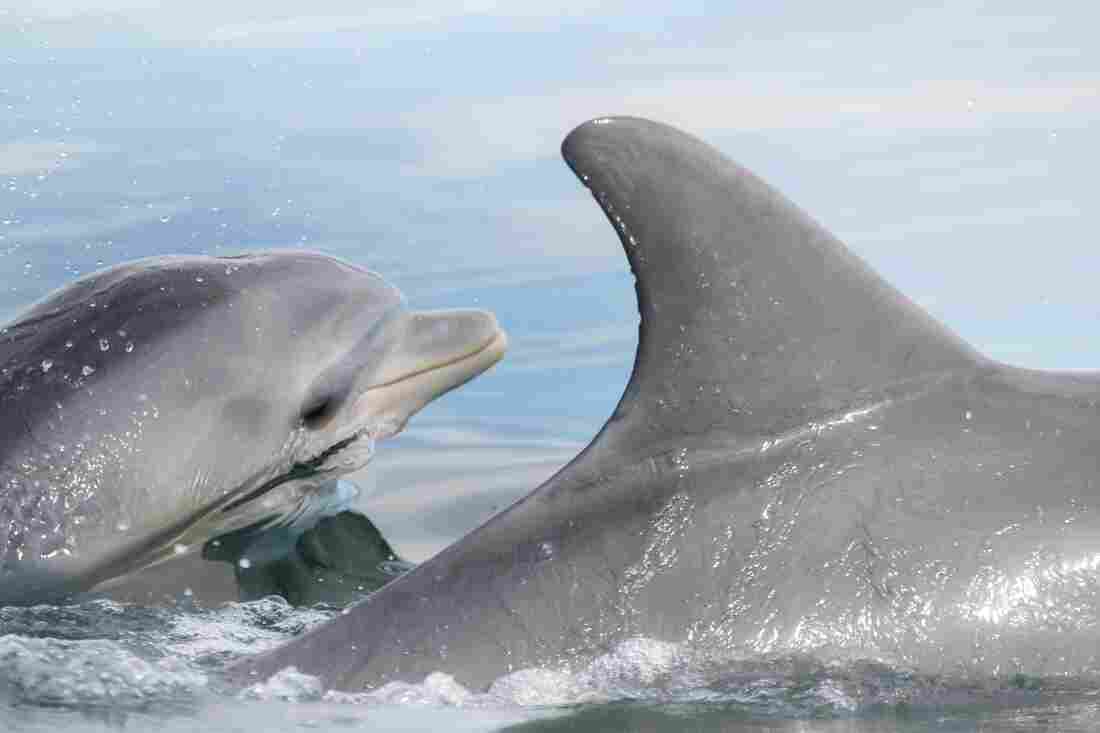 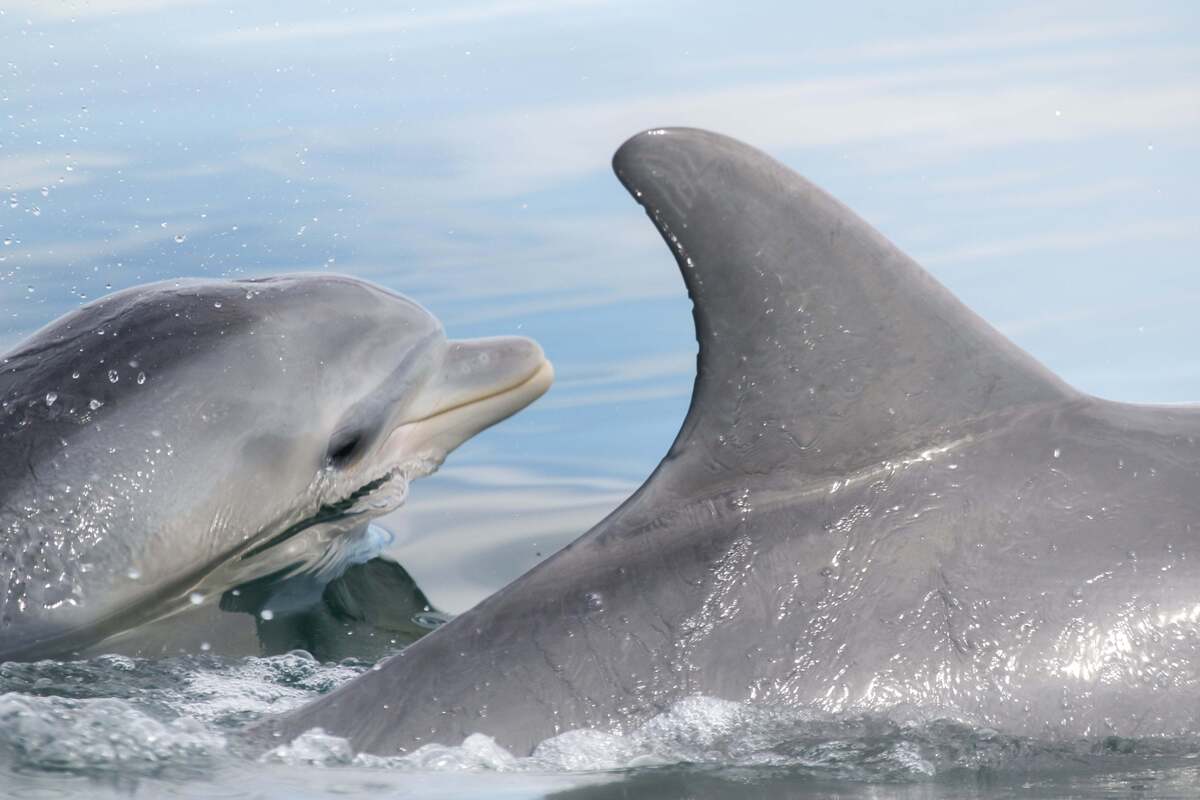 New research shows that dolphins can learn foraging behavior from other dolphins.

Dolphins learn special foraging techniques from their mothers—and it's now clear that they can learn from their buddies as well. Take the clever trick that some dolphins use to catch fish by trapping them in seashells. It turns out that they learn this skill by watching their pals do the job.

The discovery, reported in the journal Current Biology, helps reveal how groups of wild animals can transmit learned behaviors and develop their own distinct cultures.

"Dolphins are indeed very clever animals. So it makes sense that they are able to learn from others," says Sonja Wild, a researcher at the University of Konstanz in Germany. She says young dolphins spend years in close association with their mothers and naturally tend to adopt their mothers' ways, but this study shows that "dolphins are not only capable, but also motivated to learn from their peers."

The bottlenose dolphins that live in Shark Bay, Western Australia, have been studied for decades, and scientists have identified over a thousand individuals by looking at the unique shape and markings of their dorsal fins. Researchers know what families the dolphins belong to, and keep track of their close associates. These dolphins use a variety ways of finding food—and not every dolphin uses every method.

Some dolphins, for examples, use sponges as tools. The dolphins break a conical sponge off the seafloor, and then wear it almost like a protective cap on their long snout, or beak. This apparently helps them probe into the rough sand of the rocky seafloor and search for buried prey.

Research done over a decade ago shows that this behavior gets passed down almost exclusively from mother to child. "So, at some point, one of the dolphins figured out how to use these sponges for foraging," says Wild. After that, it was passed on to her descendants through the maternal line.

Now, Wild and her colleagues have closely examined how dolphins learn another strategy for catching fish—one that involves using the empty shells of large sea snails. 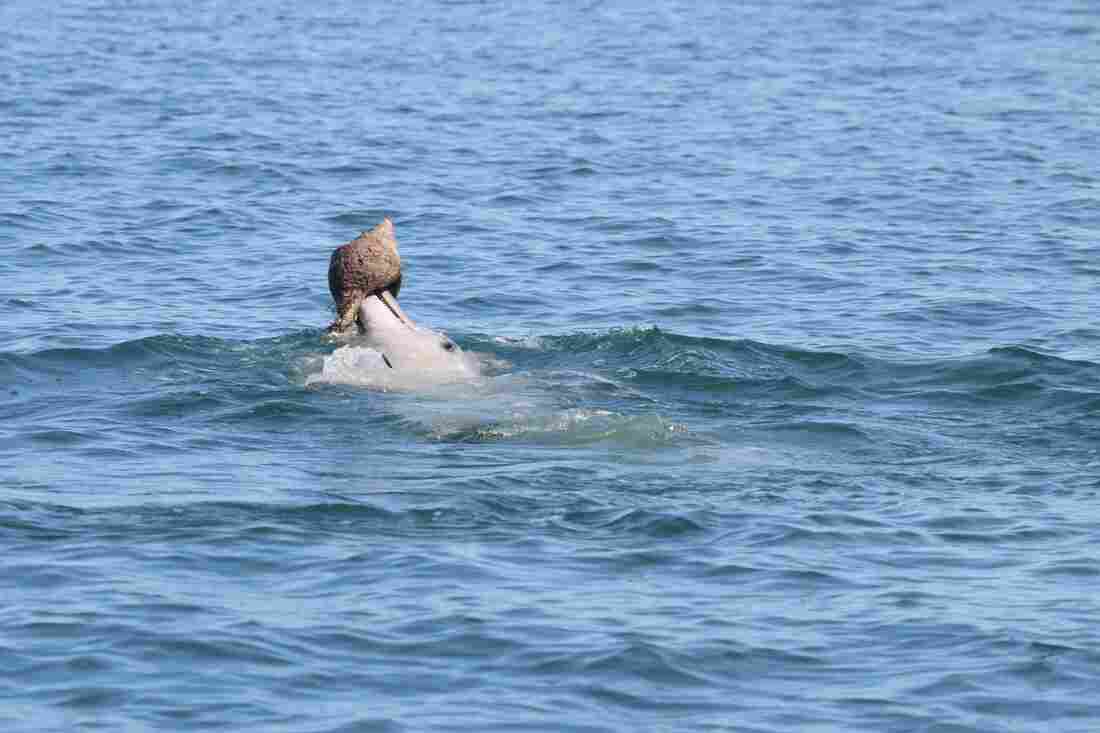 A dolphin practicing shelling behavior, which involves chasing a fish into a shell and then carrying the shell to the surface to consume the fish. Sonja Wild/Dolphin Innovation Project hide caption 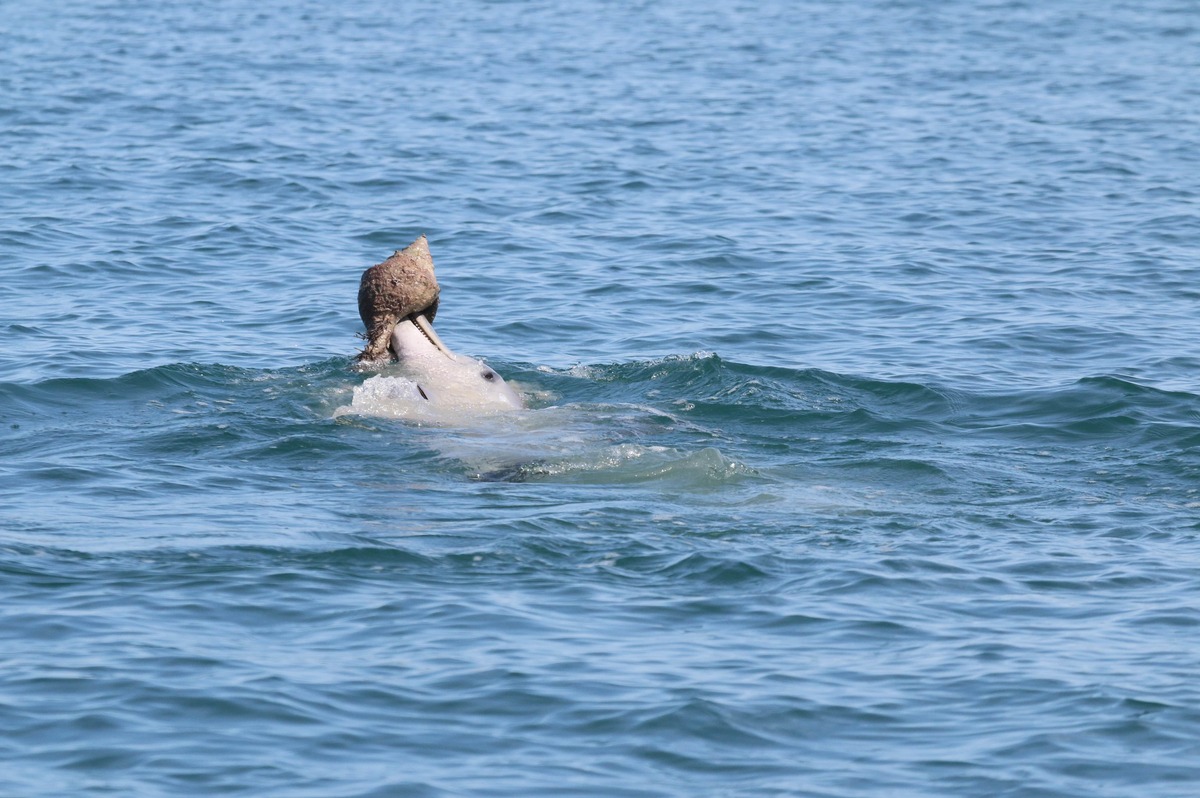 A dolphin practicing shelling behavior, which involves chasing a fish into a shell and then carrying the shell to the surface to consume the fish.

A dolphin will chase a fish into one of these shells, says Wild, "and then they insert their beak into the shell, bring the whole thing up to the surface, and then shake it up above the water surface to drain the water out of the shell until the fish basically falls into their open mouth."

"It's a very remarkable behavior," says Wild. "Seeing it is really mind blowing."

When she and her colleagues tracked which dolphins used this so-called "shelling" technique, they figured out that "the shelling behavior doesn't spread between mother and offspring, but spreads between peers. So basically, dolphins that spend a lot of time with shelling individuals are more likely to learn that behavior themselves," says Wild.

Whether or not dolphins caught fish in this way didn't seem to be explained by how many shells were lying around their hunting area, nor whether a dolphin was genetically related to another dolphin that knew how to do it. The best explanation, she says, is that dolphins learned this method from a close associate.

Previously, it's been shown that humpback whales seem to learn hunting techniques from their peers in a similar way, she notes.

The new observations of wild dolphins learning from their peers is "exciting," says Diana Reiss, a dolphin cognition researcher at Hunter College, CUNY.

"It tells us about the source of some these behaviors," says Reiss. "Are they learning because they innovate individually on their own? They may. We can't discount that. Are they learning just from their mom? They may for certain kinds of behaviors. But in this particular behavior, it seems like they're not relying on just learning from mom when they're out there. They seem to be observing others, watching what they're doing and acquiring it from others in their social group."

Being able to learn from peers may help animal populations survive in a changing environment. Because while knowledge from previous generations has been tested by time, certain behaviors may become less useful if conditions change.

"In unstable environments that are changing, it's more beneficial to kind of look around and see what others are doing," says Wild, "and maybe adopt their behavioral innovations that may be more adaptive to the new environmental conditions."