Accessibility links
Steve Bullock's COVID-19 Response May Boost His Senate Run He has been praised for his handling of the pandemic, which is becoming a key issue in his bid to unseat Republican Sen. Steve Daines. Montana now has the lowest coronavirus infection rate in the U.S. 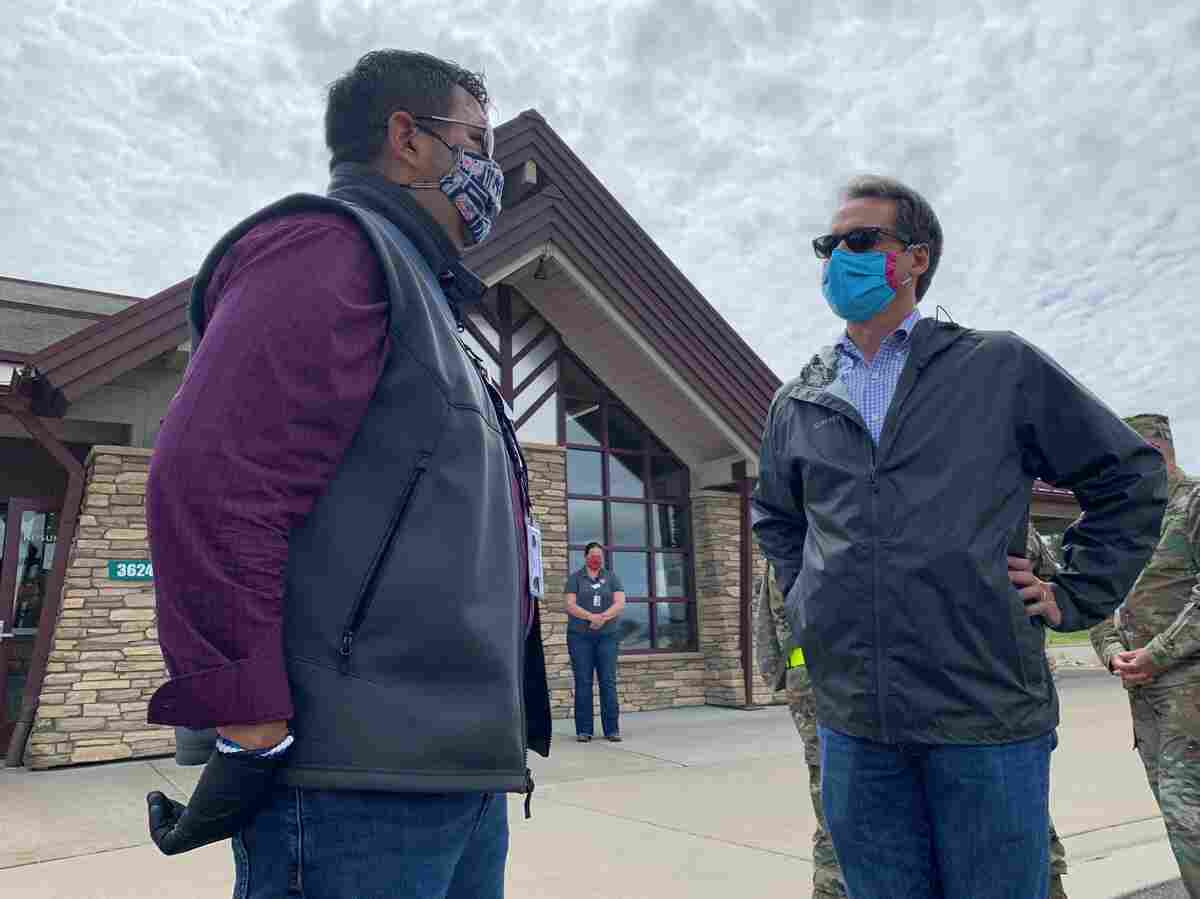 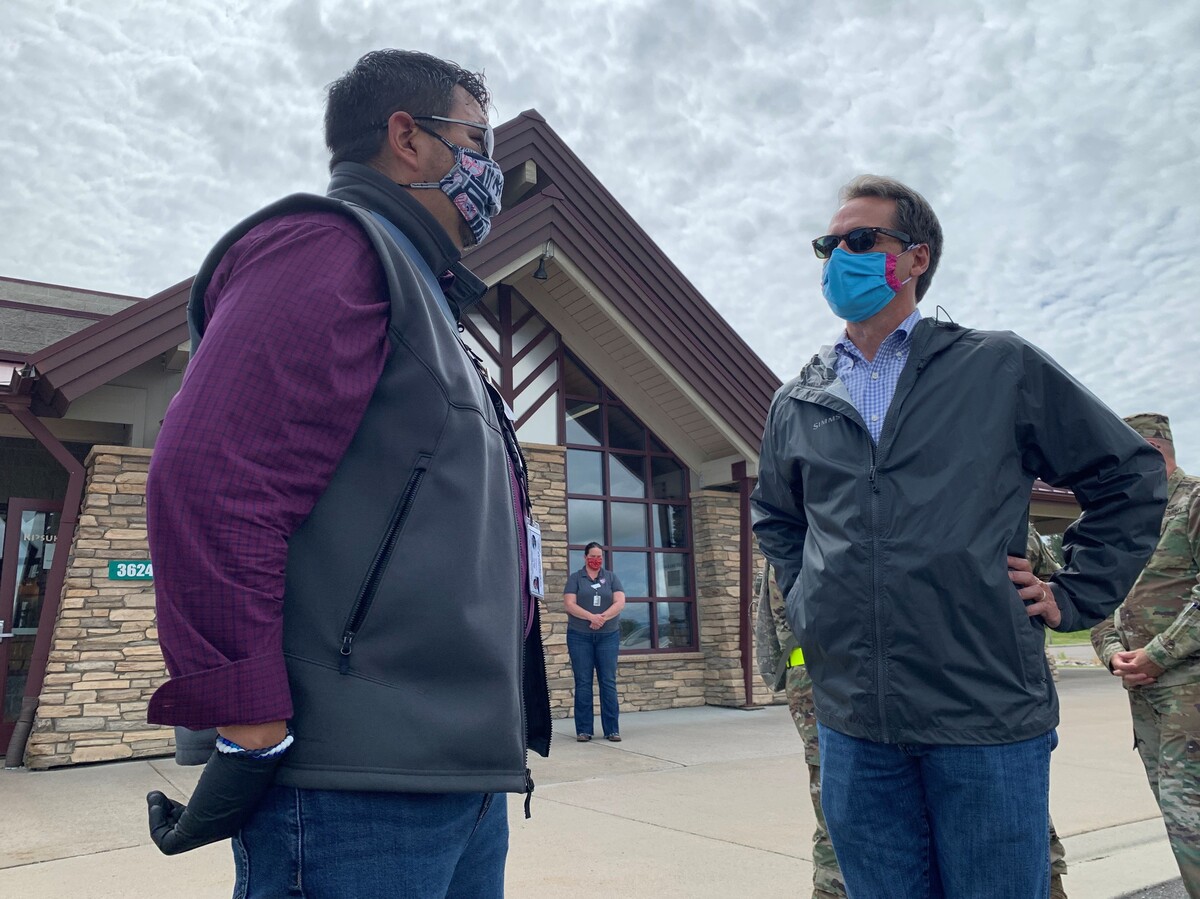 Montana Gov. Steve Bullock, right, gets an update on coronavirus testing from councilman Martin Charlo of Confederated Salish and Kootenai tribes. Montana now has the lowest coronavirus infection rate in the U.S.

At a free mass testing site on Montana's Flathead Reservation, hundreds of people are queued up in idling cars. They're waiting an hour or more for the irritating nose swab test for the coronavirus, but most, like Francine Van Maanen, are just grateful to finally get one.

"We enjoyed the fact that they had this testing available to us, so why not get checked," she says, while waiting in line with her husband.

Nurses wearing face shields put the swabs in plastic tubes while busily scribbling notes on clipboards. This "mass surveillance" testing event was part of Democratic Gov. Steve Bullock's recent goal to do community surveillance testing of 60,000 Montanans a month ⁠— the state has yet to come close to hitting that.

"This is big, this is overwhelming," Bullock told tribal and county health officials working the recent Flathead event. "Now let's start talking about when we're going to do it again."

Under Bullock's watch, Montana now has the lowest coronavirus infection rate in the nation, and among the lowest hospitalizations and deaths. Daily new case numbers have been going up for the past two weeks, but only by single or double digits. The pandemic ⁠— and Bullock's handling of it as the state's top leader ⁠— is fast becoming a central issue in his campaign to unseat Republican Sen. Steve Daines in the fall. 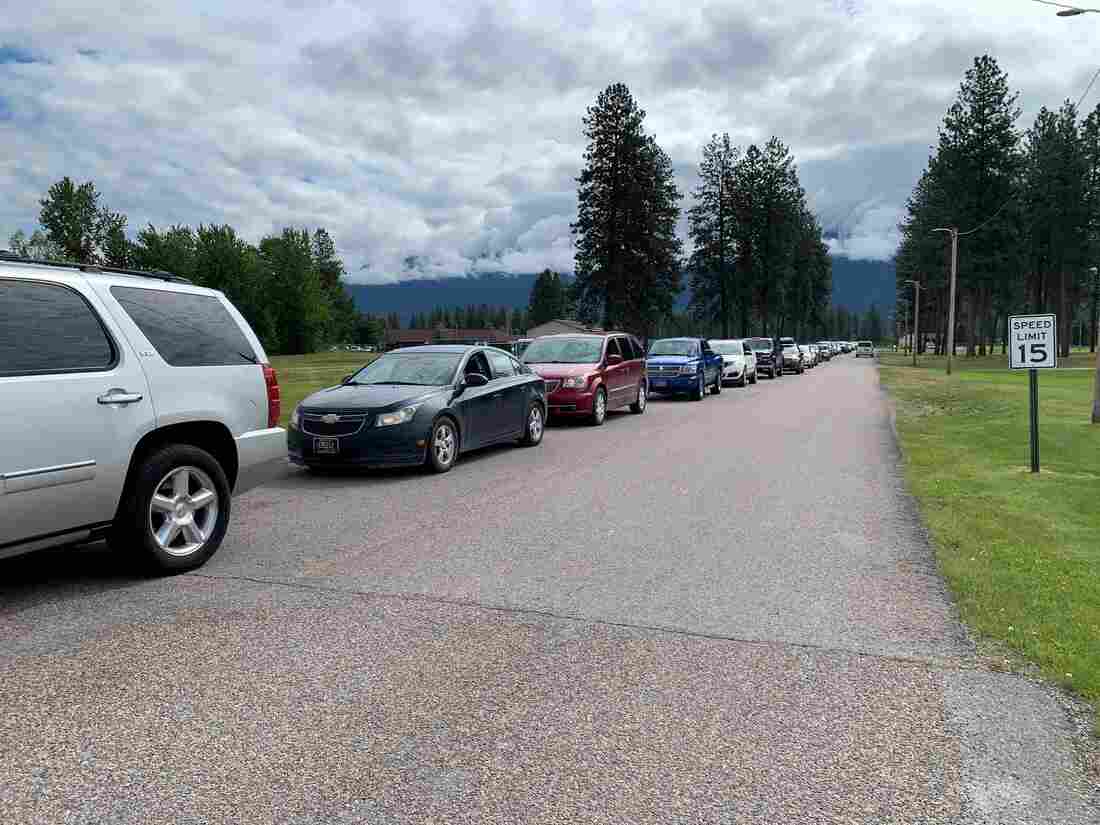 Some waited for more than an hour to get tested at a recent free coronavirus testing event on the Flathead Reservation. Kirk Siegler/NPR hide caption 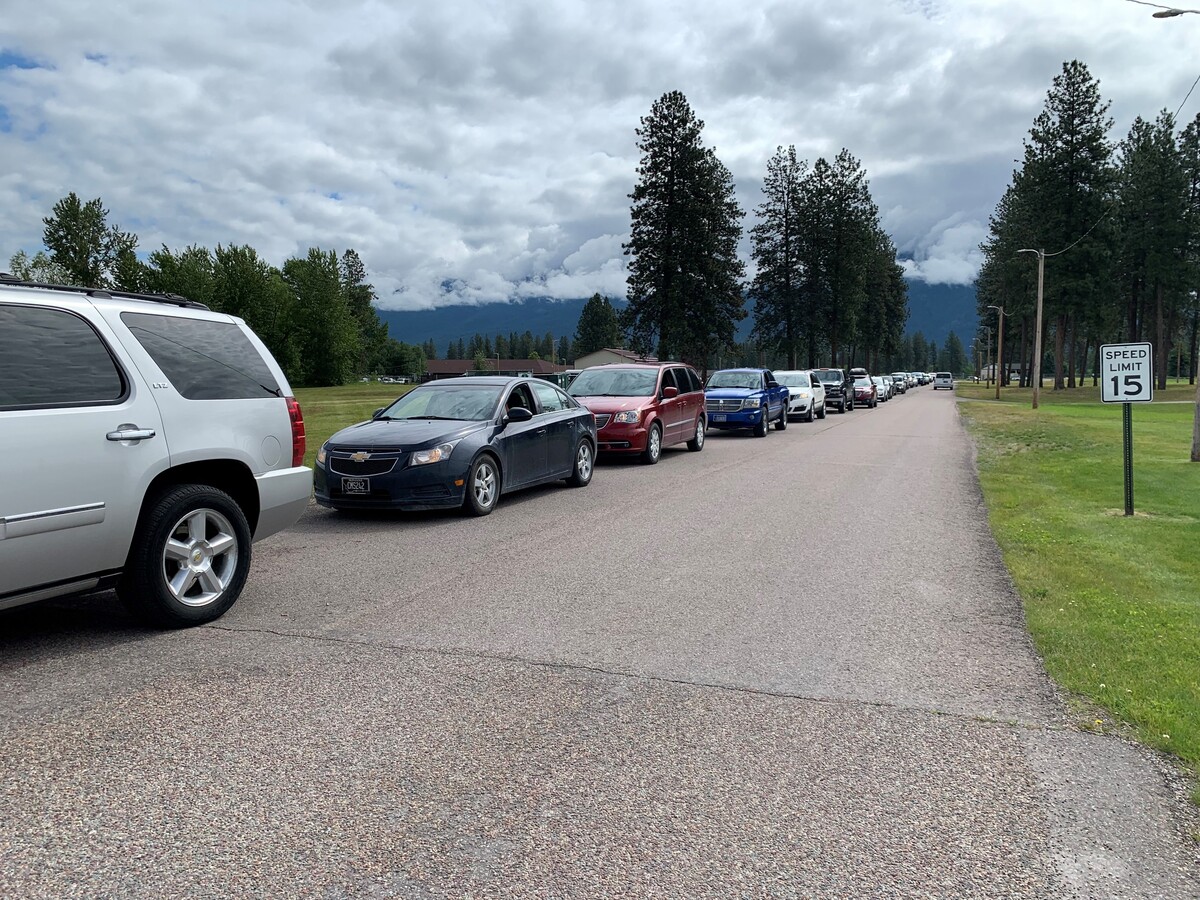 Some waited for more than an hour to get tested at a recent free coronavirus testing event on the Flathead Reservation.

Bullock, citing advice from local public health officials, implemented a statewide stay-at-home order and closed most schools down earlier than some neighboring states on March 28. Montana also began a phased reopening earlier than most, around the middle of last month. By June 1, citing the low number of cases, Bullock lifted a 14-day quarantine requirement for travelers, saying there is ample contact tracing now.

On the Flathead, the onetime presidential candidate was in his element, wearing jeans and cowboy boots, his Ray-Bans shielding against the glare from the sun hitting the late season snow high on the Mission Mountains.

Bullock is termed out as governor after this year. After months of insisting he wouldn't run for Senate, just before the filing deadline, he changed his mind in March. Then a few days later, the pandemic hit.

"I think there'll be a time for the campaigning side of that," he says. "But that hasn't been where I've really been putting the time."

But the pandemic is in the news every day, which so far hasn't exactly hurt Bullock, who until recently had been seen as the underdog.

"He's dominating the airwaves, you can't turn around without seeing a story about the governor," says Chris Mehl, the nonpartisan mayor of Bozeman.

Bozeman is the state's fastest-growing city. It's swung blue lately, in part due to a wave of newcomers attracted by the area's outdoor and recreation amenities and the increased ability to telecommute. The university town near ski resorts and Yellowstone National Park was also Montana's initial hot spot for cases.

"It's in a sense become what he's tied to," Mehl says. "The issue for him is the competency of handling the pandemic, both on a health side but also on an economic recovery side." 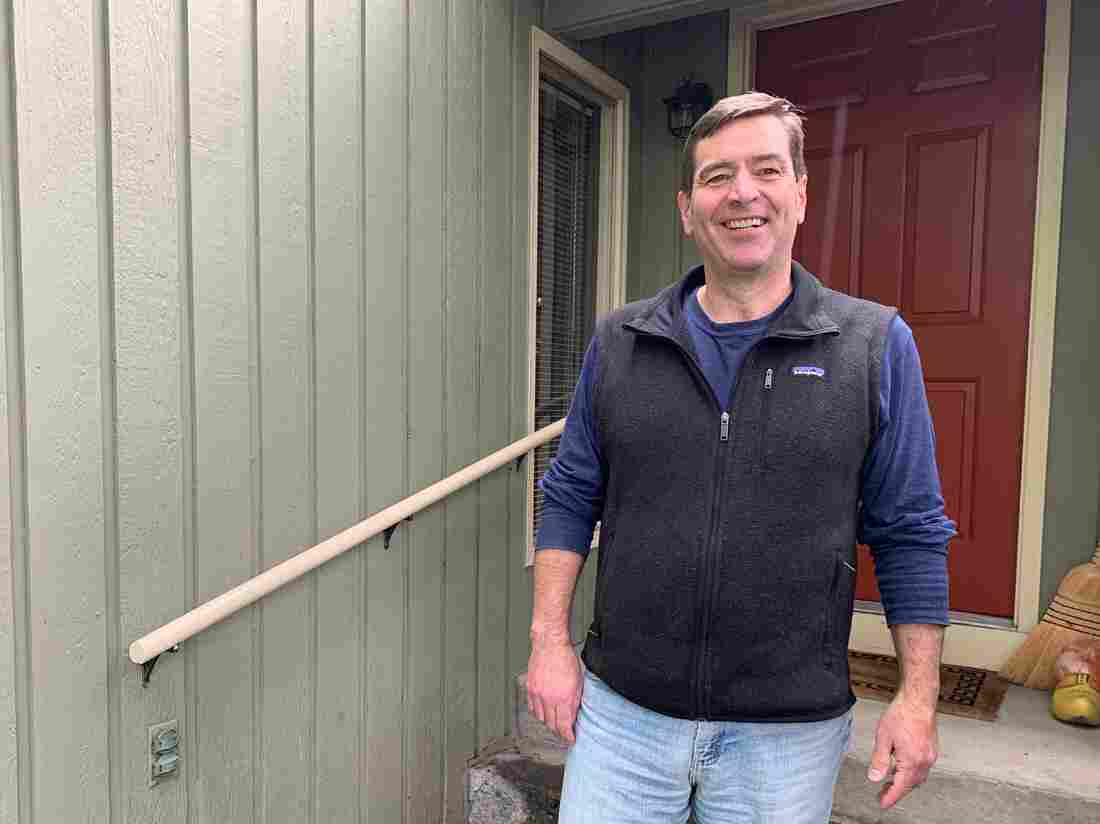 Bozeman Mayor Chris Mehl's city lies at the heart of Montana's fastest-growing region. It was also an early hot spot for coronavirus cases in the West. Kirk Siegler/NPR hide caption 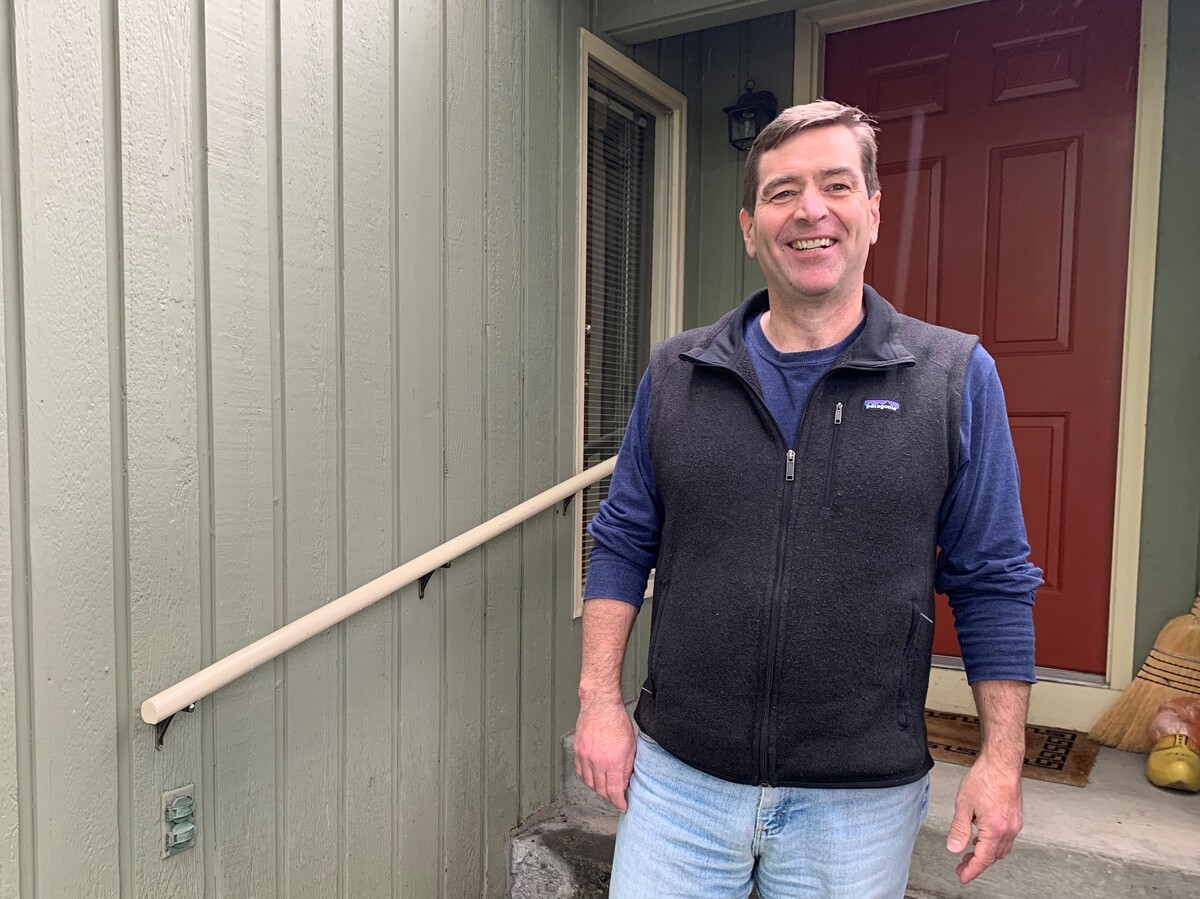 Bozeman Mayor Chris Mehl's city lies at the heart of Montana's fastest-growing region. It was also an early hot spot for coronavirus cases in the West.

Bozeman is also Daines' hometown. Lately Daines has struggled to get into the local news as much as Bullock, even after he helped pass a sweeping public lands conservation bill. If these were normal times, that would have been big news considering the growing influence of the outdoor recreation economy in the state.

Nevertheless, in a phone interview, the senator says he doesn't think the public health crisis itself will be much of a factor come fall.

"I think by the time voters start to cast their ballots, this election is going to be a jobs and economy election," Daines says.

Daines touted his experience helping small businesses, and he predicted unemployment claims will continue to mount if the pandemic continues to hamper economic recovery.

Daines has positioned himself as one of the president's staunchest supporters. When Trump tweeted the so-called "squad" should go back where they came from, Daines doubled down in support. He was also one of the few Republican senators to publicly praise the president when peaceful protesters were cleared out from in front of the White House so Trump could pose holding a Bible.

"Montanans are going to vote for President Trump, he's going to win Montana," Daines says. "They're going to be glad that he's coming here."

Trump also came to Montana four times in 2018, failing to unseat the state's other senator, Democrat Jon Tester. While no dates have been set, his return on behalf of Daines is widely expected and that's prompting the same public health concerns as at recent rallies in Tulsa and Phoenix.

"That bridge will be crossed when there is a decision made to have a rally," Daines says.

Yellowstone National Park Set To Reopen — But With Caveats

Montana is famously all over the map politically. When Daines was elected in 2014, he took over a Senate seat that Democrats had held for 100 years. In 2016, when Trump won Montana by nearly 20 points, Bullock was reelected as governor.

Just like during his long-shot presidential bid, Bullock is touting his bipartisan record, from COVID-19 to Medicaid expansion and showing support for the Keystone pipeline that crosses the state.

"Look, I stood up to President Obama multiple times," Bullock says. "I'll work with whoever it is when it's in the best interest of Montana."

One place Bullock has taken some heat for his handling of the pandemic is in national park gateway towns like West Yellowstone. Montana's entrance gates opened three weeks after Wyoming's, as per Bullock's order.

"I would have loved to have seen us open earlier," says Travis Watt, general manager for a hotel and a couple other businesses in the tourist-dependent town. "I'm glad he didn't wait till longer. I know there was a lot of pressure to push until later."

Watt didn't vote for Bullock for governor, but he says he likes how he's managed the pandemic so far.

"It's a unique situation and you look at some of the things going around in the country and I think Montana sits pretty good," Watt says.

While Daines can probably win Montana with a big turnout from Trump's base and rural voters, Bullock will need people like Watt to consider crossing over, just as he needs coronavirus cases to stay low and the economy to rebound.