Accessibility links
In 'What You Need To Know About Voting — And Why,' Law Professor Kim Wehle Breaks It Down In a new book, Kim Wehle explains voting basics. She tells NPR, "if we don't go to the polls to protect democracy itself, it could fail. And I believe that's what's on the ballot in November." 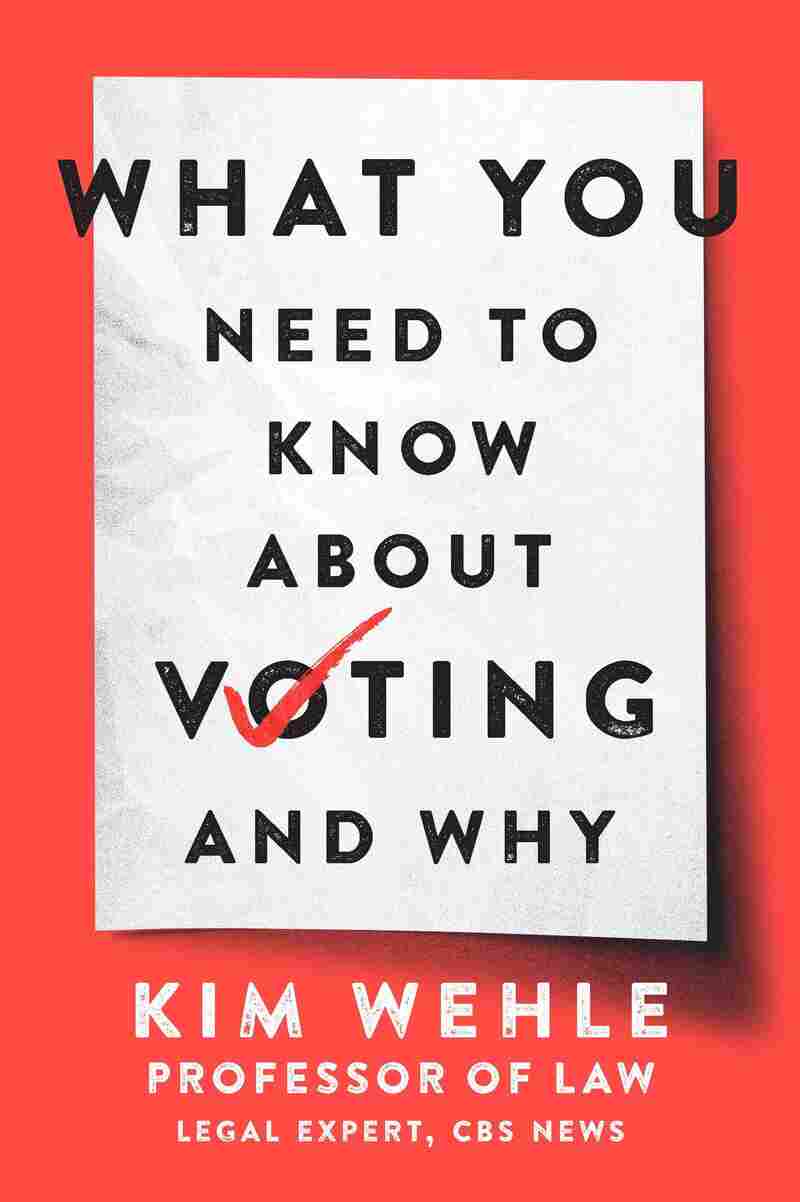 What You Need to Know About Voting — and Why, by Kim Wehle Harper Paperbacks hide caption

The presidential election is just a few months away.

Who votes and who doesn't — and why — is a complex question. Kim Wehle, a law professor at the University of Baltimore, has written a book she calls "one-stop shopping" to help address this — and to break down voting into small, managable questions and answers.

Her book, What You Need to Know about Voting — and Why, addresses voting- and democracy-related questions like the meaning of voter suppression, whether voter fraud is real, and what foriegn interference means, and defines everything from dark money to PACs.

On public understanding of voting-related issues

I find every year that people come into the classroom with fewer and fewer basics, that I think we assume students, even adult students, have. And the complexities around our voting system, number one, that's something that I don't think any person, frankly, in the United States, even with deep expertise, can understand in one snip. But also, I having wrote a book last year about the Constitution and understanding the fragility of our system of government and how so much of it actually hinges on having a functioning electoral system, I felt it was imperative to give people a one-stop shopping place to go to get all the basics about voting so that that knowledge can be in everyone's walking around vocabulary and we can start working from foundational principles — and not so much divisive concepts that I think flood the airwaves and flood so much of our conversations in private and public life right now.

On the most common misconceptions Americans have about voting

Well, a question I get a lot is about illegal voting. Voter fraud. I think there is a misconception that that is" the "serious problem in our electoral process. And unfortunately, that becomes really politicized — that if you are not concerned about voter fraud, somehow you're, you know, a liberal left wing person and not taking this seriously. There just isn't empirically a lot of evidence of that. Of course, it's really important to have safe and secure elections. But on the other end of the spectrum, the biggest problem really is participation. Not only are there barriers to entry — it can be difficult to not just get yourself registered, but to stay registered for people who don't have a driver's license for example — but also, there's just a lot of belief, widespread belief that votes don't matter, that it's OK to stay home from the polls because the system is rigged.

There's a lot of cynicism. And I think that's extremely corrosive to democracy because it really is, at the end of the day — we've seen so many of the guardrails of democracy fall, particularly with this presidential administration — at the end of the day, it's what protects us from tyranny. And the framers understood that. But if we don't go to the polls to protect democracy itself, it could fail. And I believe that's what's on the ballot in November. Regardless of where you are in the political spectrum, if you like a functioning democracy, get out and actually cast a ballot even if you've never done it before — and save that system for our children and grandchildren.

So originally, the only people who could vote under the Constitution were wealthy white males. And so we are in an opt-in system. You have to show that you're eligible to vote. Other democracies, it's opt out. You're automatically in — and you have to decide to get out. So the history of the United States has been opening the voting tent to more and more people, people that were formerly enslaved males and then eventually women and other people. But we still have this undercurrent of even if there's a right to vote, only the right people should vote. And of course, it culminated in the Voting Rights Act in the 1960s where African Americans, even though they had the legal right to vote, were being disenfranchised by poll taxes, literacy tests, basically making it hard to vote based on subjective, silly criteria. And what we're seeing now of a voter suppression efforts are closing polling stations, you know, having insufficient resources at the polls on Election Day. Now, some of that is legitimate. Just not enough money, not enough people on the ground that can actually execute these complex electoral systems.

But it's also a function, I think, of politics. We saw this with the Georgia governor's race in our country. The secretaries of state in each state, for the most part, manage elections. And for that particular election, the secretary of state, Brian Kemp, was also running for the governorship. So he had control over the rules for getting to the polls, staying on the rolls, how many polls are open, where the polls are open, what the hours are, how to count the ballots. You know, it's pretty easy to tweak things around the edges to benefit one party over the other. And in that instance, Stacey Abrams lost by approximately 50,000 votes.

And under Mr. Kemp, there was a system where if your signature didn't match other government documents, you were put on hold. And you'd show up at the polls. Some people showed up the polls and they weren't registered because they were taken off the rolls based on that technicality. And about 50,000 people were put on hold — and, of course, that was about his margin of victory. So this kind of changing the rules of the system state by state in ways that do have a disparate impact on certain people is what's known as voter suppression. And my belief is everyone who's eligible — it shouldn't be hard. It should be really, really easy. And the fight should be around serious policy issues, not whether the right people should be able to exercise their right to vote.

On voting by mail

This is not something that has been a concern by these states that vote almost exclusively by mail and actually the residents of those states really like it. It's very convenient, even in the age without a massive pandemic. It also increases voter participation on both sides of the political spectrum. It benefits Democrats and it also benefits Republicans. And I think in light of the absence of evidence backing up the president's claim, what you have to ask, is this president trying to win the election by keeping people home, not by actually giving people a reason to vote for him, and that keeping people home is a tactic that even we know the Russians used in 2016 and continue to use to this day, as does Iran and China, other countries.

The idea of telling people your vote doesn't matter. Planting false information to make people cynical about voting. That is a way to corrode our democracy. And it's something that affects and hurts people across the political spectrum. No one, I think, wants a system whereby the politicians tell us what to do. I mean, it's government by we the people, and the way we maintain our position of authority over our elected leaders is at the ballot box. So the president is just wrong about that. And we need to move on. That's not the battleground right now around voting. The battleground is to make it safe for people to exercise their legal and constitutional right to decide for themselves what kind of leadership we have in this country.

If you get online, you'll find many, many organizations and Web sites that work very, very hard to inform voters about voting to help people with registration. You click on, you can register. But what I found there wasn't one place, a handbook that you could have on your shelf in your home that had not only information about how to register and how to vote ... but also basic civics, basic background information about the constitutional right to vote, which actually isn't in the original Constitution, although the Supreme Court has recognized it. And just voter education about what does it mean that the vote is being suppressed? Is voter fraud real? What does it mean to have foreign interference in our election? What is dark money? What is a PAC? What is a super PAC?

I found in writing this book with the help of multiple research assistance, law students, that there is not one place where all of this is not only in in one place that's kind of neutral, but also written in a way that makes sense. And that's frankly where my real passion lies as a law professor and lawyer is translating some of this really complex, overlapping stuff into soundbites, tangible, concrete, digestible information that makes sense to people. So then people can make their own decisions about how to participate in their democracy. No one likes to be told what to do. The book is about how to think about these things so people can make their own decisions. And I do think that's a different way of teaching. It's not content based. It's how-to based. And I'm not so sure that's been packaged this way around voting or the Constitution up until now.