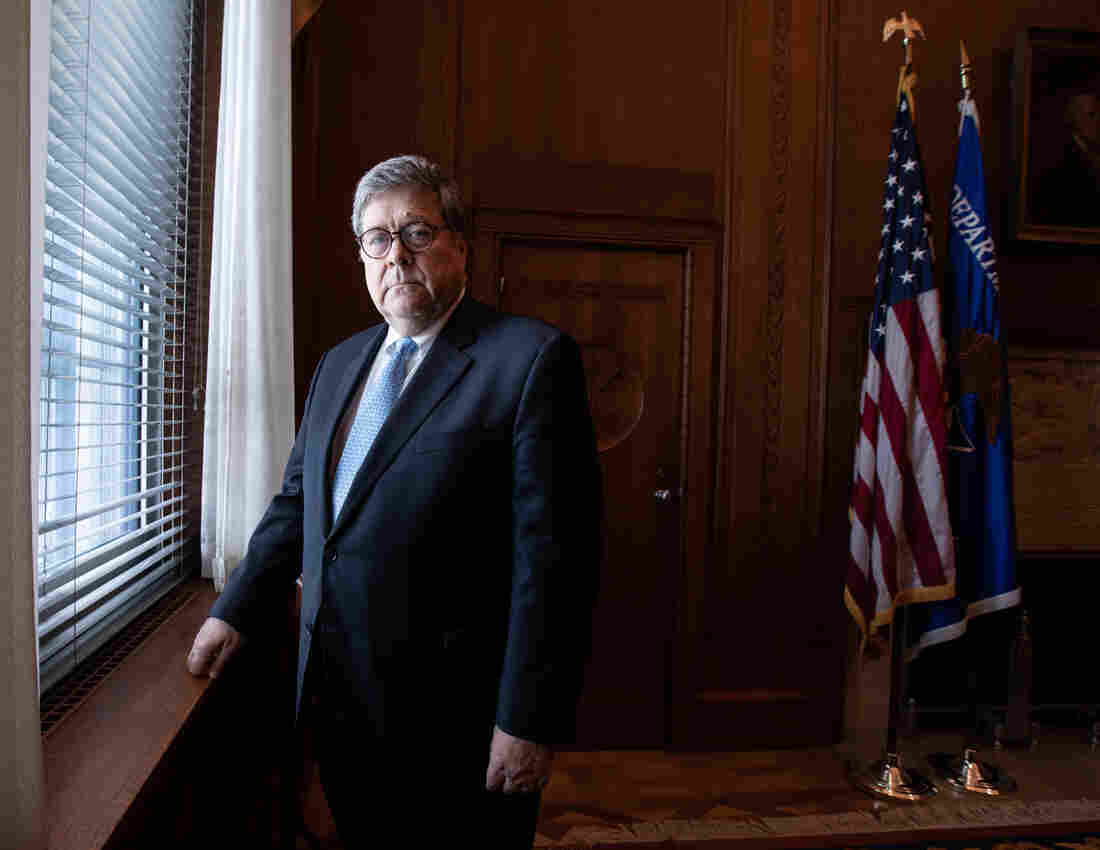 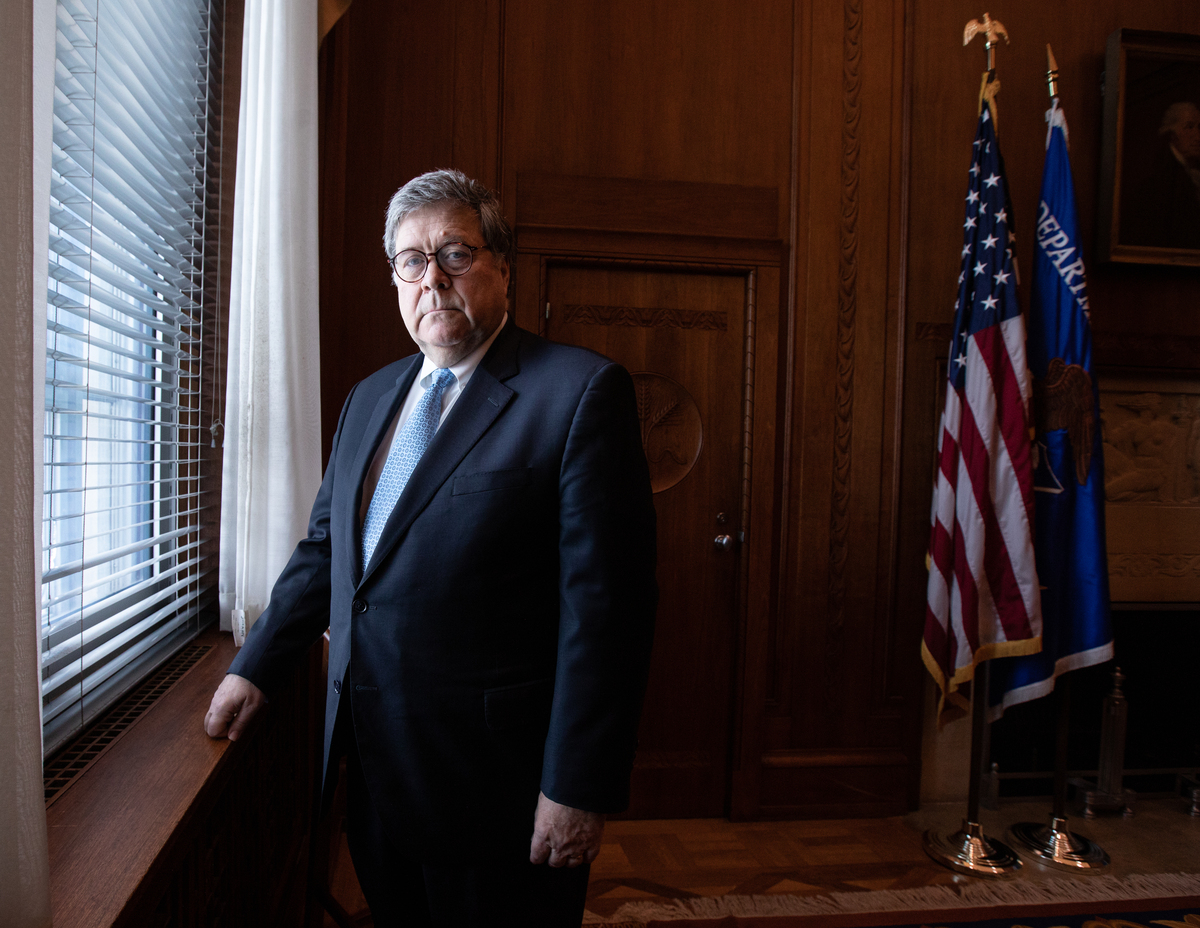 In an NPR interview, U.S. Attorney General William Barr defended the Justice Department amid accusations of political interference, including recently in the case of former national security adviser Michael Flynn.

Attorney General William Barr said Thursday that he doesn't believe President Trump has overstepped the boundaries between the White House and the Justice Department in a number of big recent cases.

Barr told NPR in a wide-ranging interview that he believes Trump has "supervisory authority" to oversee the effective course of justice — but Barr said that ultimately, the choices were made and carried through independently by the Justice Department.

"It's very important that the attorney general make sure that there's no political influence at stake involved in that — and there wasn't," Barr said.

NPR's Steve Inskeep asked Barr about the case of former national security adviser Michael Flynn, in which the Justice Department dropped charges even after Flynn's guilty plea; about the firing of U.S. Attorney Geoffrey Berman in New York City; and about others.

Barr faulted what he called "irregularities" in the Flynn case that he said made it appropriate for him to resolve it by scrapping the prosecution. And he denied that there was anything suspicious about the replacement of Berman, including any connection to ongoing investigations that might involve associates of Trump.

Barr also defended his recent comments in which he claimed without evidence that foreign countries could potentially counterfeit "millions" of mail ballots to interfere in the November presidential race.

It's a claim that a number of election officials and experts have rejected, calling it "preposterous" and "false." State officials of both parties have pushed for increased access to mail ballots in response to the coronavirus pandemic.

When pressed on whether he had evidence to suggest such a plot was underway by foreign adversaries, the attorney general said that he did not, but that his department had evidence of foreign countries being interested in interference more broadly — and that he thought mail voting was an obvious target.

"You don't have to be a rocket scientist to figure that one out," Barr said.

Skeptics among elections specialists point to the dozens of aspects of each jurisdiction's mail ballots that would need to be replicated for an attack of this nature to work: from the bar code, to the weight of the paper, to the successful forgery of voters' signatures.

"It shows a fundamental lack of understanding about the soup to nuts of administering an election," said Paul Gronke, a political science professor at Reed College. "You can't just source the paper, re-create the ballot styles, fake the signatures, on any kind of mass scale."

Barr, who voted by mail in 2019 and 2012, according to The Washington Post, said that he supports mail voting in isolated situations but that he does not believe broad expansion is possible without significant fraud and mistakes. Most election officials disagree.

"Election officials spend a great deal of our time building in security measures," said Washington Secretary of State Kim Wyman, a Republican, this week when asked about Barr's claims. "The idea that people could print millions of ballots either within the country or external to the country, just on its face, is not going to pass muster with an election official."

Barr also defended on Thursday his thesis that recent protests over police brutality against Black Americans have been infiltrated and overrun by antifa agitators.

Barr and Trump have repeatedly painted antifa as a criminal, far-left anarchist organization, blaming its adherents for some instances of violence and looting during recent protests for police accountability.

NPR reporting found no sign of antifa links so far in cases brought by the Justice Department, but Barr reiterated Thursday that antifa is more of an "umbrella term" and that protesters who identify as antifa would have been charged with specific actions like throwing a Molotov cocktail.

"The statistics on police shootings of unarmed individuals are not skewed toward the African American," he said. "There are many whites who are shot unarmed by police."

While white people account for a higher number of unarmed fatal police shootings, Black people, who make up about 13% of the U.S. population, are disproportionately affected. Of the 352 unarmed people shot and killed by police in the U.S. since Jan. 1, 2015, white people accounted for 145 of the deaths; Black people made up 123 of those killed, according to a compilation of fatal police shootings by The Washington Post.

On the subject of the coronavirus pandemic, Barr once again criticized state governors for implementing strict mitigation protocols in an attempt to slow the spread of the virus, accusing those leaders of abusing their power and compromising citizens' livelihoods.

"Basically, putting the entire population in home detention and telling people that they have to shut down their livelihood and their business. And they leave that to the discretionary decision of governors," Barr said.