A massive cloud of dust from the Sahara Desert is arriving along the U.S. Gulf Coast this week after traveling across the Atlantic Ocean. The phenomenon happens every year – but the 2020 version is especially large and imposing, experts said.

The dust cloud is "quite large" this year, said Marshall Shepherd, director of the Atmospheric Sciences Program at the University of Georgia, in an interview on NPR's All Things Considered. "I think that's why it's garnering so much attention."

That attention has included some experts who are calling it the "Godzilla dust cloud" due to its unusual size.

There are signs that the cloud is living up to the hype. Michael Lowry, an atmospheric scientist at the Federal Emergency Management Agency, said the cloud shattered the previous record for dust across the tropical Atlantic, as measured by the MODIS satellite.

The ongoing Saharan #dust outbreak across the tropical Atlantic is *by far* the most extreme of the MODIS satellite record -- our most detailed, continuous record of global dust back to 2002. Daily MDR AOD of 1.66 shatters previous daily record of 1.13 set July 31, 2013. #SAL pic.twitter.com/yv2VW9LUYO

As of Thursday morning, the cloud was stretching from the western Caribbean, over Belize and the Yucatán Peninsula, and through most of the central and western Gulf of Mexico, blanketing a huge area with its haze.

After reaching the U.S. shore in Texas and other states on the Gulf of Mexico, the dust cloud is expected to shift toward the northeast, moving across the Southeastern U.S.

"I think we'll get it mainly over the weekend," Shepherd said, discussing the dust cloud's likely arrival in Georgia.

View of El Yunque on a sunny day in March and a hazy day with Saharan dust in June pic.twitter.com/aVRD2pR76z

The technical name for the phenomenon is the "Saharan Air Layer," according to the National Oceanic and Atmospheric Administration.

"This layer can travel and impact locations thousands of miles away from its African origins," the agency says, "which is one reason why NOAA uses the lofty perspective of its satellites to track it."

As the dust crosses the Atlantic, "it usually occupies a 2- to 2.5-mile-thick layer of the atmosphere with its base starting about 1 mile above the surface," NOAA hurricane researcher Jason Dunion said.

As the dust moved across Louisiana on Thursday, images from the ground showed it had turned the sky a milky color with not a trace of blue.

Since everyone else is posting. Here are my early shots of the #SaharanAirLayer in Mandeville, LA. Not as much hazy at the surface but just an overall milky appearance to the air. No blue sky at all. pic.twitter.com/kq9X5Svz7v

"Typically, you lose the blue sky for more hazy, milky sky," Shepherd said. "You tend to see more vivid sunsets and sunrises because of the scattering properties of the dust interacting with the sunlight.

"So those are sort of the optical effects. But I think people that suffer from allergies or perhaps have some kind of allergy to dust or particulate matter, they actually might not find it so amusing. They may have some health issues."

Experts also noted that the dust could add to challenges faced by people infected with the coronavirus, complicating the respiratory ailments they face.

The dust is already affecting air quality on the U.S. mainland, with the Environmental Protection Agency's AirNow monitoring map showing the southern rim of Gulf states draped in warning colors of yellow and orange. 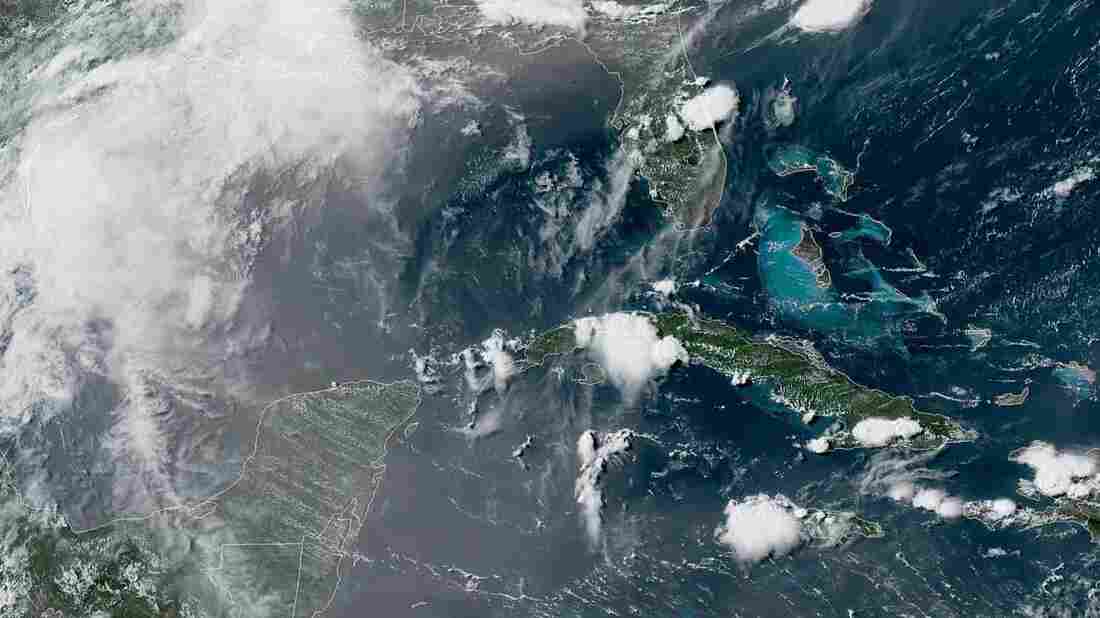 A massive cloud of dust from the Sahara Desert is arriving along the U.S. Gulf Coast this week after traveling across the Atlantic Ocean. The dust will move over the Southeastern United States after reaching the U.S. shore. NOAA/NESDIS/STAR/GOES-East hide caption 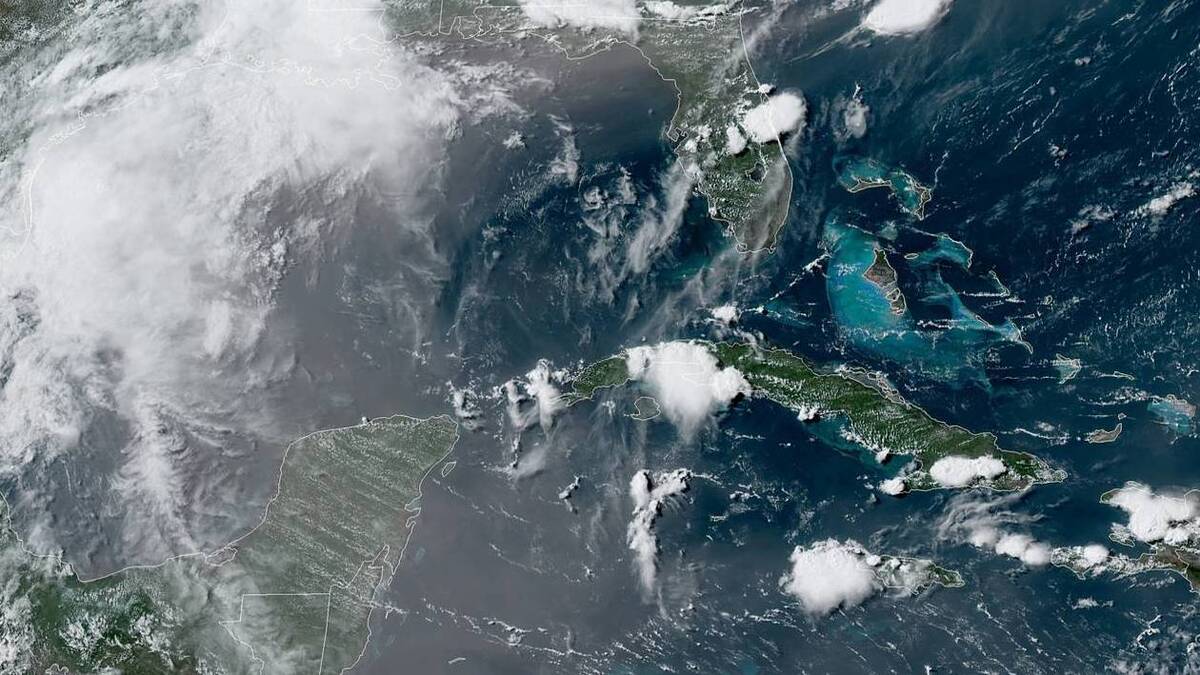 A massive cloud of dust from the Sahara Desert is arriving along the U.S. Gulf Coast this week after traveling across the Atlantic Ocean. The dust will move over the Southeastern United States after reaching the U.S. shore.

In addition to causing dramatic sunsets, the Saharan dust cloud also serves at least two positive purposes: It tends to hamper the development of hurricanes, due to its warm, dry air, according to NOAA.

The dust also "plays an important ecological role, such as fertilizing soils in the Amazon and building beaches in the Caribbean," NASA's Earth Observatory said.

Each year, the NASA unit said, winds in North Africa loft about 800 million metric tons of desert dust into the air, often scattering the dust thousands of miles away.