Accessibility links
These Are The Minneapolis Activists Leading The Push To Abolish The Police It took less than two weeks after George Floyd's killing for Minneapolis City Council members to pledge to end the police department. But activists had been laying the groundwork for years. 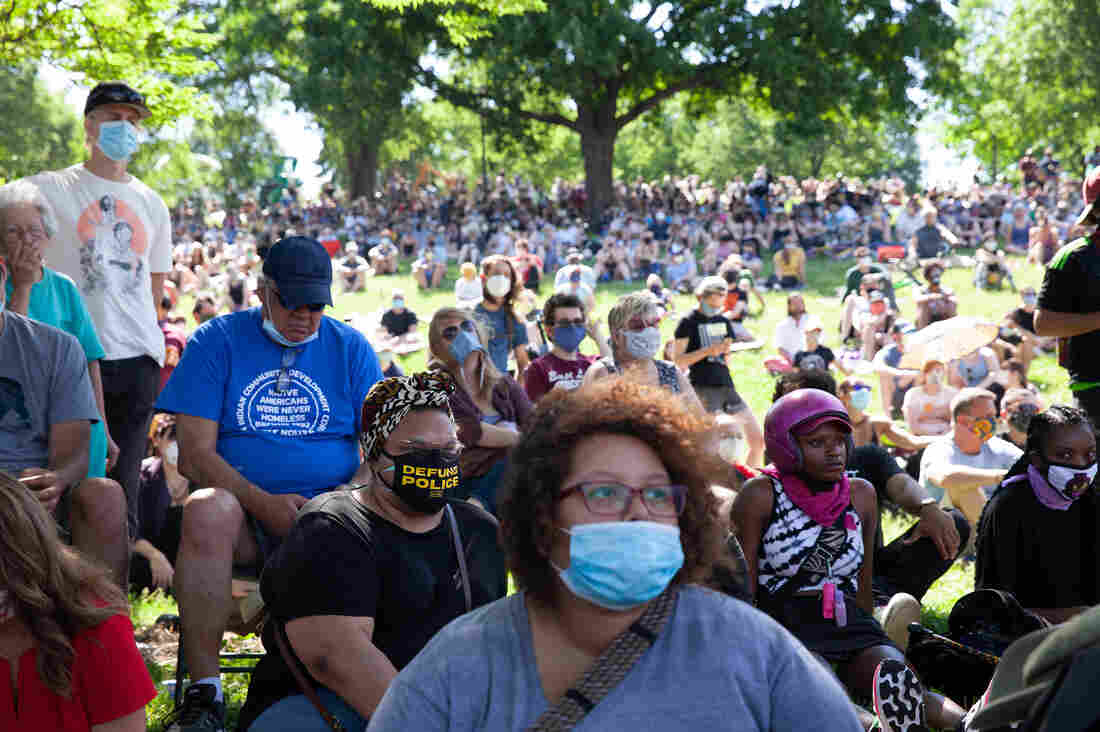 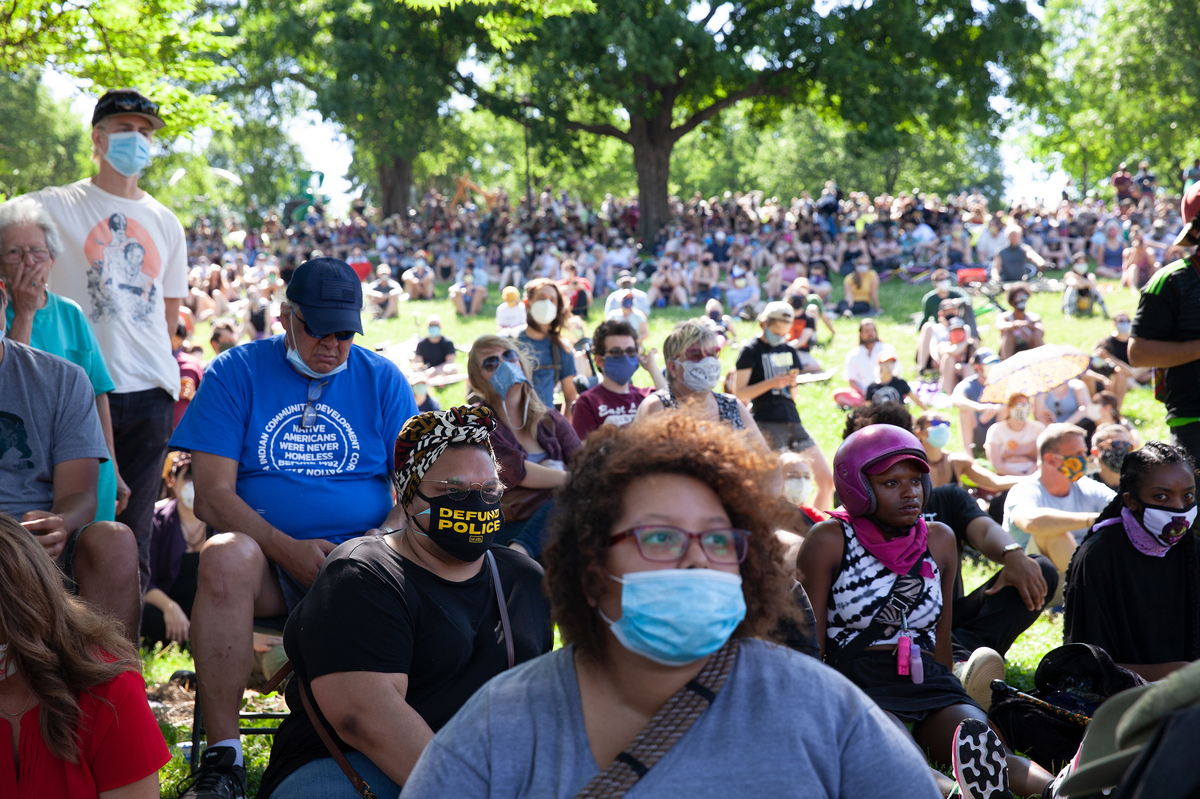 The crowd at the June 7 rally where Minneapolis City Council members pledged to begin dismantling the city's police department.

When, on June 7, nine members of the Minneapolis City Council went onstage at a rally organized by Black activists and took turns reading a pledge to dismantle their city's police department, many in the crowd at Powderhorn Park let out not just cheers, but full-throated screams.

They were screams of joy mixed with disbelief. Just two weeks earlier, even organizers who'd spent years calling for a disbanding of the city's police force would have admitted they did not yet have the political capital to get it done. That changed on May 25. The police killing of George Floyd and the resulting national outrage over police brutality quickly thrust the idea into the realm of the possible.

There are still many questions about what a police-free city would look like, and even whether the city council that's pledged to dismantle the police department will succeed. The political headwinds are proving fierce. But if it is going to happen anywhere, activists in Minneapolis believe, it is going to be in their city.

Floyd's killing was the kind of flare-up they had been preparing for: a catalyzing event they'd expected to someday present itself, allowing them to shift public opinion in favor of an otherwise radical, seemingly improbable proposal.

And so a few years ago they began laying the groundwork for such a moment.

They got to work – dozens of racial justice activists organizing in concert to make disbanding the police a core demand of the city's Black and Brown activists.

Here are three of the people at the center of that effort: 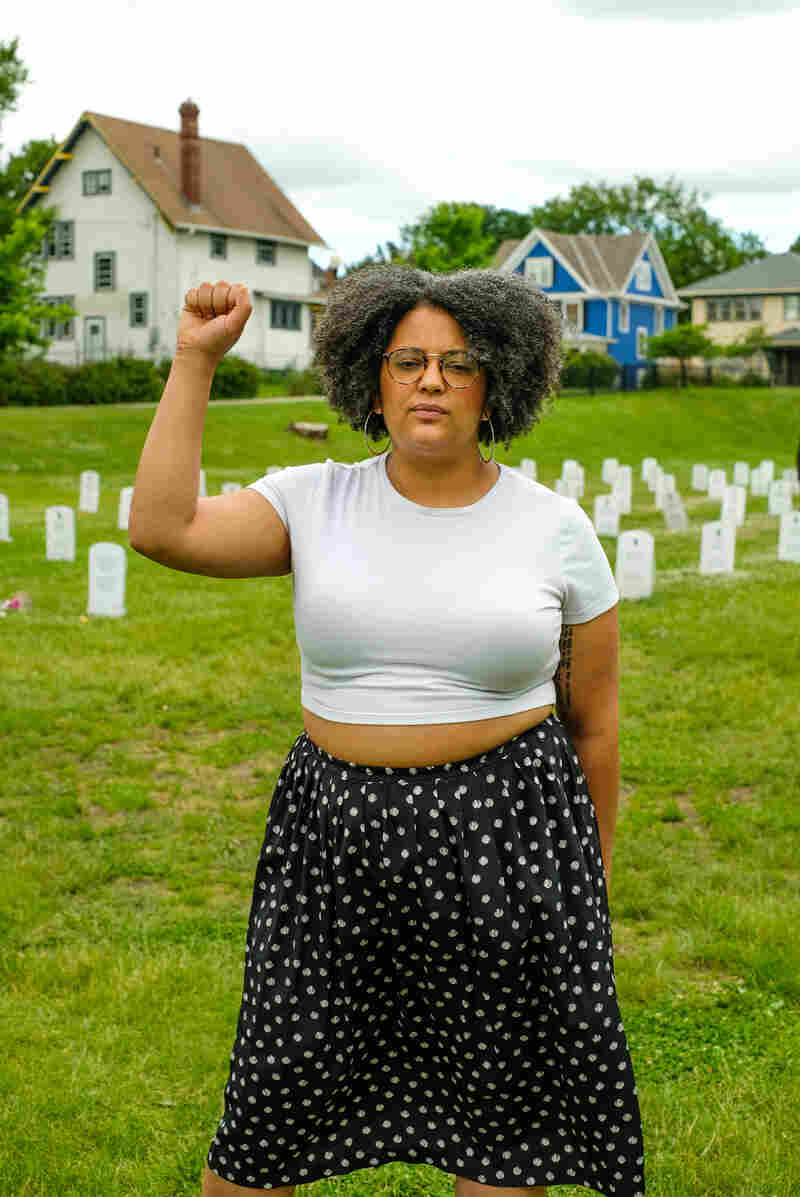 Kandace Montgomery, a core member of the Black Visions Collective, one of the main groups calling for the disbanding of the Minneapolis police. Laylah Amatullah Barrayn for NPR hide caption 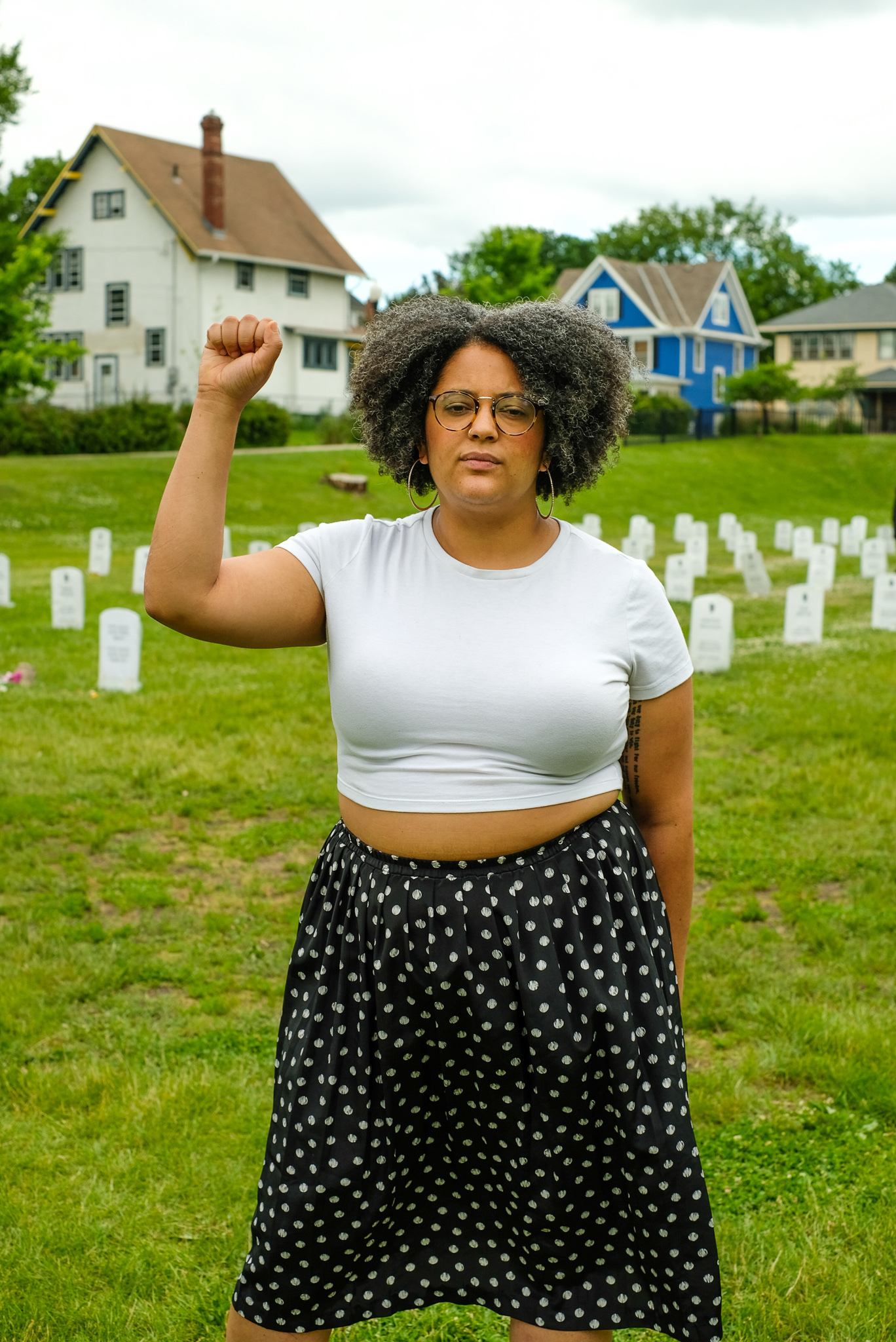 Kandace Montgomery, a core member of the Black Visions Collective, one of the main groups calling for the disbanding of the Minneapolis police.

Like many of the young organizers leading the push to disband the Minneapolis police, Kandace Montgomery was among the activists who, in 2015, spent 18 days occupying a North Minneapolis police station to protest the killing of Jamar Clark, a 24-year-old Black man who police shot in the head.

Seven months later, many of those same activists — organized as the Minneapolis chapter of Black Lives Matter — protested again after an officer killed Philando Castile during a traffic stop in a Twin Cities suburb.

Both experiences were draining, Montgomery said. At the protest for Jamar Clark, a white man who disagreed with demonstrators shot five men. At the Philando Castile demonstrations, police sprayed chemical irritants at protesters. Not long after, Black Lives Matter Minneapolis disbanded.

"When you are a young person and you're being asked to constantly respond to the very public deaths of Black people, the work became unsustainable," Montgomery said, and because the group lacked funding or a formal structure, "it burned out."

But the protests had also coalesced a new generation of Black activists in the city — young, radical, many of them queer. In 2017, some of them regrouped, calling themselves the Black Visions Collective.

"There was a need to build an organization that was going to be around past any uprising or mainstream moment in the media," said Montgomery, who is one of the collective's leaders, "and that was going to be continuously doing the work of organizing Black community members to take action for justice."

Black Visions found a fiscal sponsor, and its members agreed that their top priority would be advocating to abolish the city's police department. They helped form a second organization, Reclaim the Block, that since 2018 has lobbied the City Council to redirect funding away from the police and into social programs.

Montgomery said she couldn't have known when she woke up on May 25 that George Floyd would be killed that day, but she said the Black Visions Collective was ready for what came next.

"We've been strategically organizing to move towards big moments like this where we would see a really quick polarization of community members toward our side," she said. Even so, "I definitely was surprised by how much momentum we were gaining in really rapid time."

Within 48 hours of Floyd's killing, as protests and riots engulfed the city, Montgomery and her co-organizers were on the phone and at City Hall, pressing council members — who already knew them well — to commit to dismantling the police. On June 6, she led a march to the home of Mayor Jacob Frey, where she asked him pointedly before a massive crowd to also commit. When he declined, she used an expletive to demand he leave the protest, as the crowd heckled the mayor with chants of "shame," and "go home, Jacob."

The Black Visions Collective had already planned its rally at Powderhorn Park for the next day, and Montgomery said she knew based on conversations with City Council members that some of them would be showing up to pledge support for ending the police department.

But it wasn't until the rally was about to begin that she took a count and realized what had happened. Nine council members had shown up — a veto-proof majority.

"We are winning," she said. 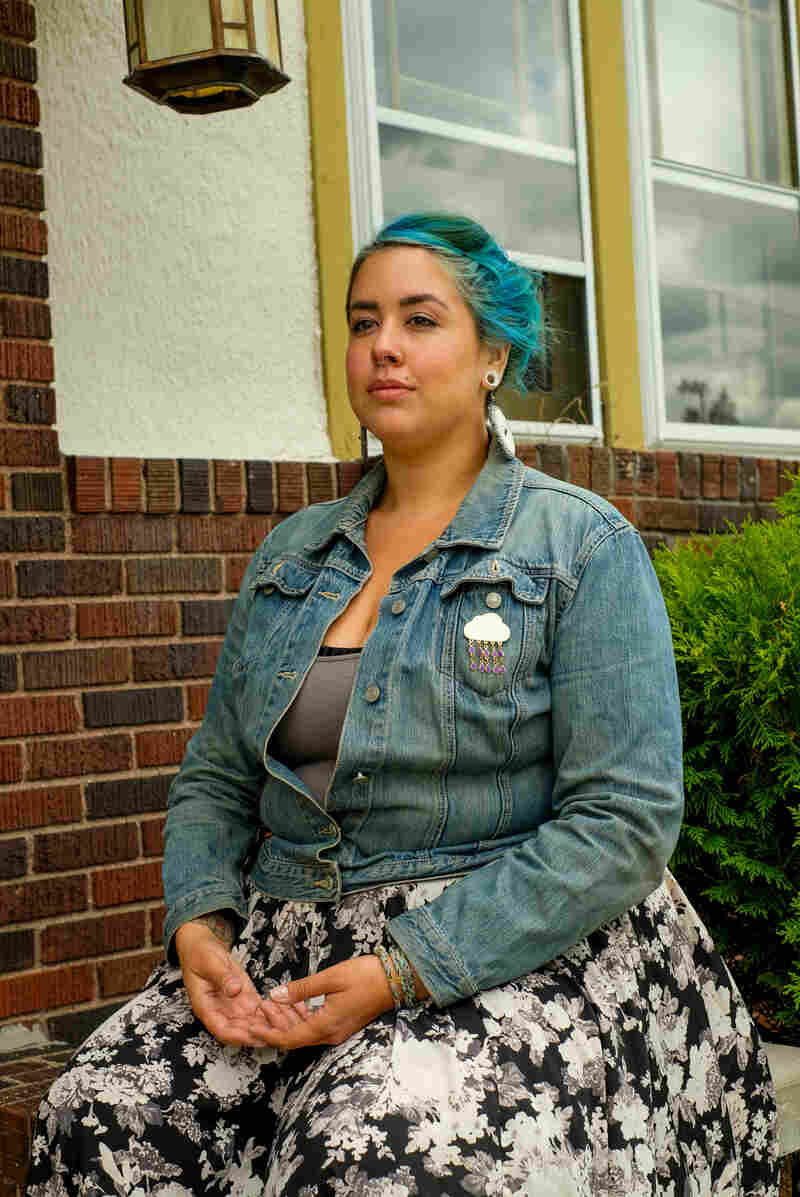 Arianna Nason helped write a report on the history of the Minneapolis Police Department that has provided much of the language activists use in the push for police abolition. Laylah Amatullah Barrayn for NPR hide caption 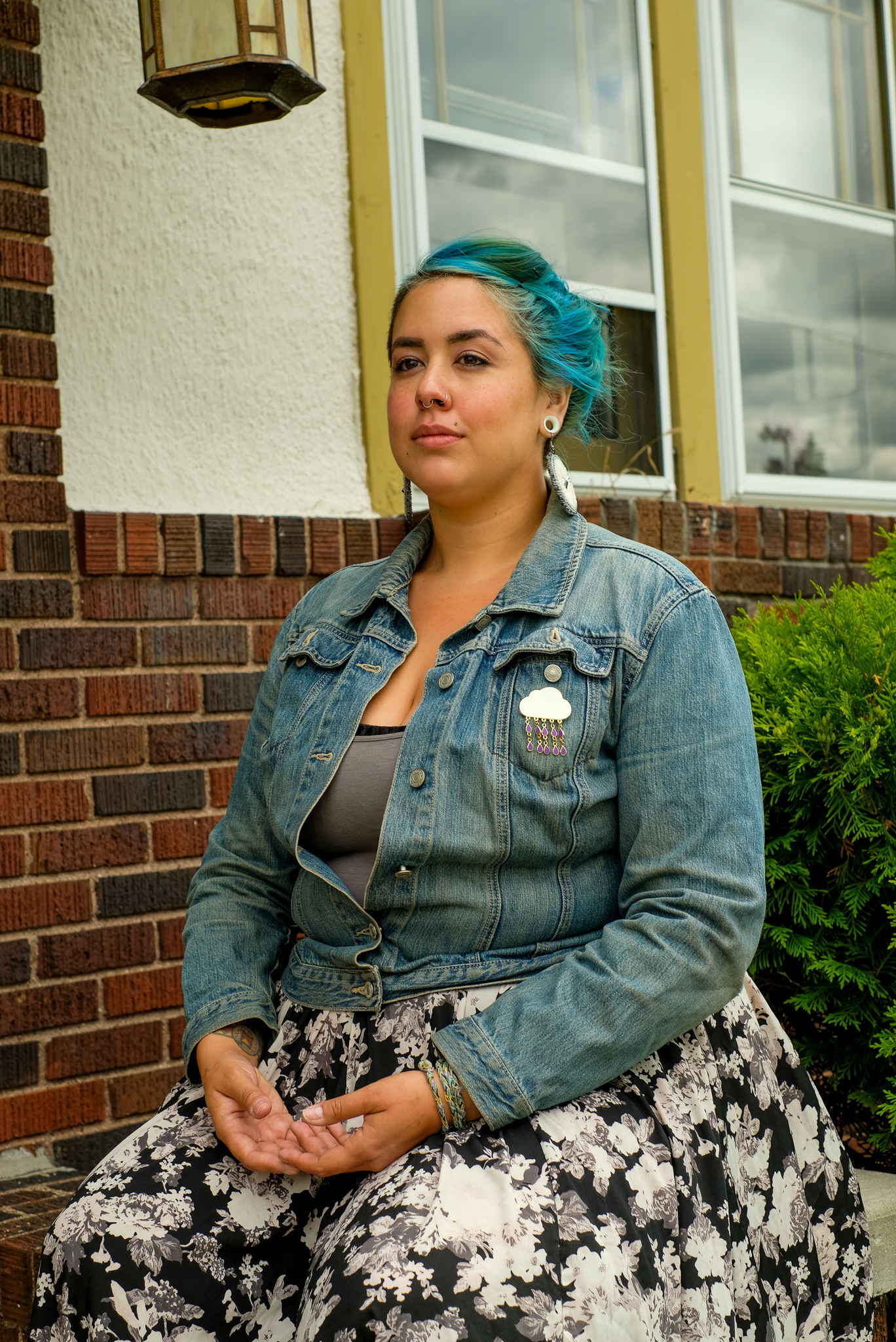 Arianna Nason helped write a report on the history of the Minneapolis Police Department that has provided much of the language activists use in the push for police abolition.

Though the protests that erupted after George Floyd's killing focused on police violence against African-Americans, it was never far from Arianna Nason's mind that Native-Americans are killed by police at rates similar to or higher than Black people while representing a much smaller percentage of the U.S. population.

For Nason — who is Anishinaabe and a member of the Fond du Lac Band of Lake Superior Chippewa — it's a reality that has informed much of her recent activism. She too participated in the encampment outside the police station after Jamar Clark's killing in 2015 and has worked to form alliances between Minneapolis' Black and Native-American communities.

Not long after the Clark protests, Nason and others who'd participated in them formed MPD150. One of the group's goals was to mark the 150th anniversary of the Minneapolis Police Department, in 2017, with a report on the history of police violence within the city.

"We did not want to do direct action work, because while that is an important and necessary component of organizing and movement work, it is not the only route to change," she said. "We wanted to take control of the narrative. We wanted to change the way that folks were talking, so that it was easier to envision a police-free future."

Their report, titled "Enough is Enough," chronicled well-known but also long forgotten instances of police violence and failed reform efforts spanning decades. It argued that history had shown the police department could not be reformed, and should be abolished. And it went further, offering suggestions for what a public safety system without police might look like.

The report became a blueprint for much of the advocacy around police abolition in Minneapolis in the last few years.

"It has provided a lot of the language to talk about this," Nason said, "and a lot of accessible, tangible information for folks to quickly learn and understand."

The language that many of the city's activists use when calling for police abolition today echoes language from the 2017 report. And Nason said members of MPD150, some of whom are also in the Black Visions Collective, helped draft the statement that the City Council members read when they pledged to abolish the police at the rally in the park earlier this month.

"It was always going to take a spark and something remarkable for this to move forward," she said. That spark, it turned out, happened a block from her apartment. You can see the corner where George Floyd was killed from her front stoop.

"The seeds around abolition had been planted," she said, "but the season of harvest had to be right, and I think that's where we are now." 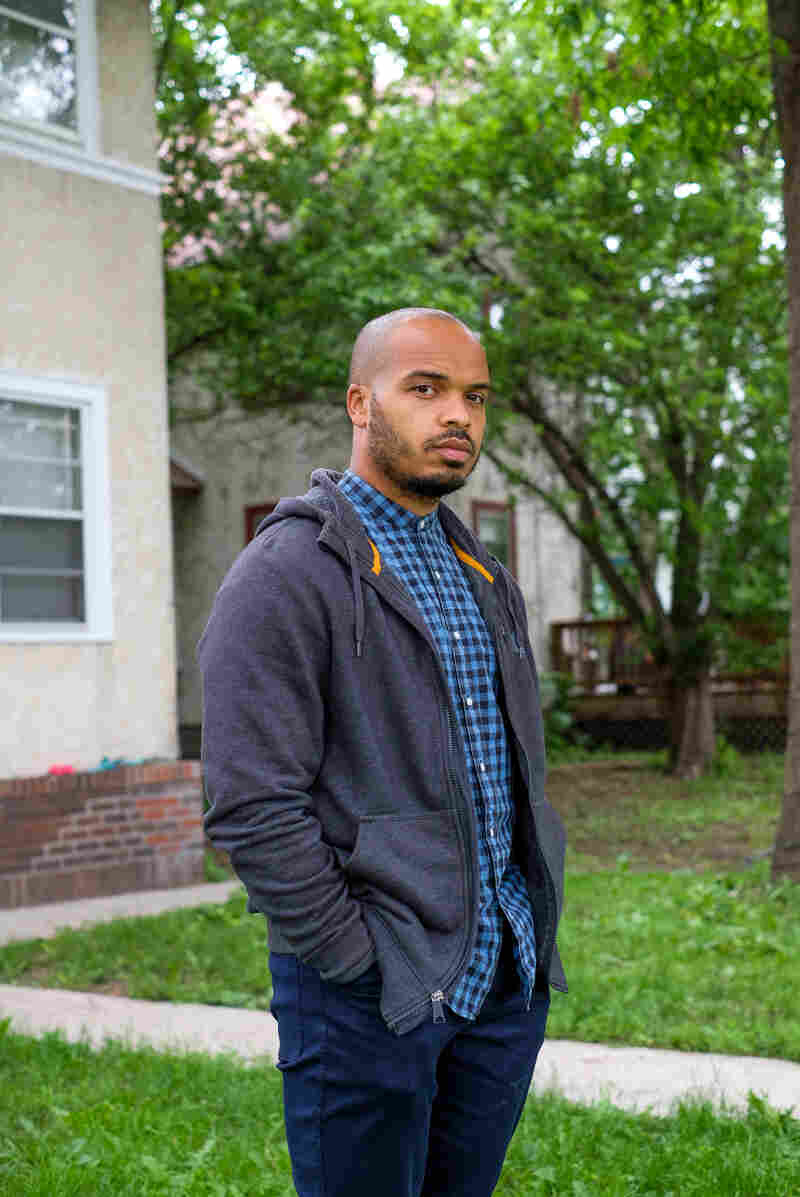 Jeremiah Ellison is a Minneapolis City Council member, and was among the first to pledge to dismantle the police department. Laylah Amatullah Barrayn for NPR hide caption 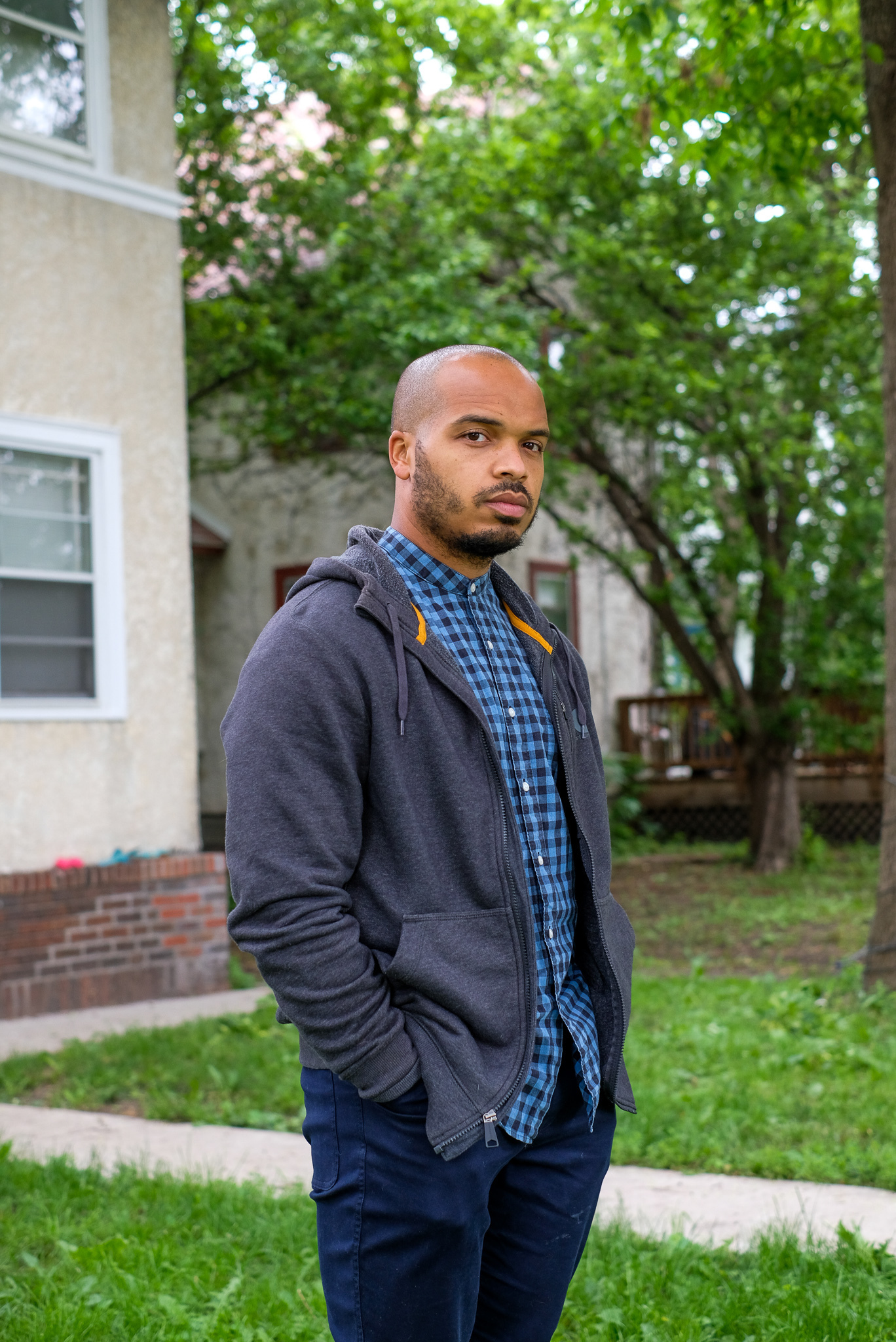 Jeremiah Ellison is a Minneapolis City Council member, and was among the first to pledge to dismantle the police department.

Before he was elected to the Minneapolis City Council in 2017, Jeremiah Ellison caused a minor controversy when, in response to a survey from activists assessing candidates for office that year, he said that yes, he could imagine a day when Minneapolis would not have police. He and other candidates who answered that question affirmatively were ridiculed by many of the city's business and civic leaders.

"I think that back then, we were thinking of it as something that was slightly aspirational," Ellison said. "But police abolition is not a concept that's new to me, and it's not something that has ever made me uncomfortable or that has seemed unreal."

Ellison, an artist, had also participated in the 2015 protests for Jamar Clark and been the subject of a famous photo showing him in a tense standoff with police. After Philando Castile's killing months later, he'd painted a mural depicting Black people's frustrations over police brutality.

Later that year, he declared his intention to challenge an incumbent council member who many Black activists criticized as soft on police accountability. Ellison won.

Though he'd never been elected to public office before, he was no stranger to it. His father, Keith Ellison, was then a member of Congress, and today is Minnesota's Attorney General, leading the prosecution against the former Minneapolis officers who killed George Floyd.

Jeremiah Ellison said that on the day after Floyd's killing, friends protesting outside the city's 3rd precinct station were sending him videos of police spraying people with mace. He went down to take in the scene, he said, and watched as officers deployed gases, flash bangs, and rubber bullets.

"I saw the crowd start running toward me after a flash bang grenade had gone off," he said. He spotted a teenage girl with blood streaming down her face from a rubber bullet wound. "And I grabbed her by the shoulders and I sat her down. And I'm wiping blood off her face, and I'm thinking to myself, this is insane."

He said it wasn't entirely unlike the police response he'd witnessed during earlier protests against police killings of Black men. But this time, he said, the police had escalated their violent response much faster.

"Back then, I was an activist, an artist," he said, "and now I'm a council member there on the ground. And I was still unable to affect how the police were responding. That was the moment I thought, I don't know if we can be in relationship with this department."

Over the next several days, Ellison said, he heard from many of the organizers who'd already spent years lobbying the council to disband the police, some of them friends from his days as an activist. And he spoke with many of his colleagues on the City Council.

On June 4, Ellison sent out a tweet with a pledge: "We are going to dismantle the Minneapolis Police Department," it read. "It's really past due."

Within three days, eight of his council colleagues had joined him in that pledge.