Accessibility links
5 Years After Same-Sex Marriage Decision, Equality Fight Continues Since the legalization of same-sex marriage in all 50 states, the LGBTQ rights movement has expanded its vision. This year's celebration comes after another big Supreme Court decision last week. 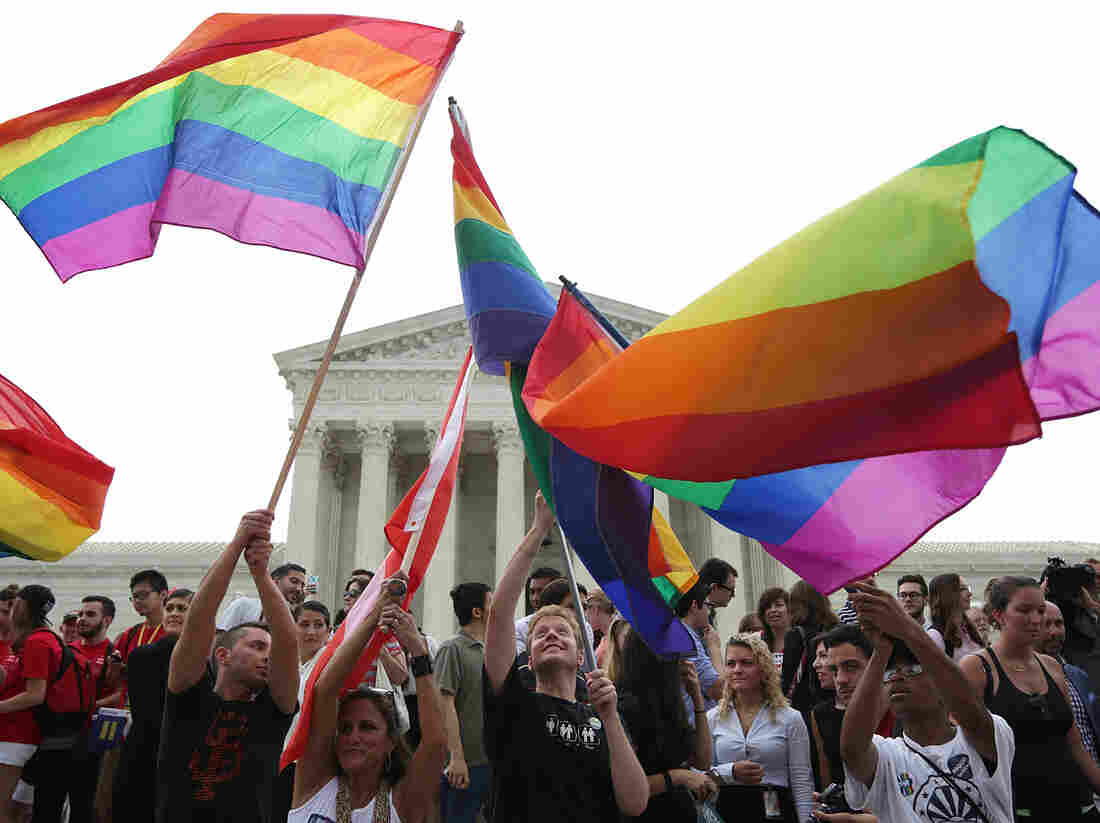 Supporters of same-sex marriage celebrate outside the Supreme Court in Washington, DC., June 26, 2015, after the high court ruled same-sex couples have the right to marry in all 50 states. Alex Wong/Getty Images hide caption 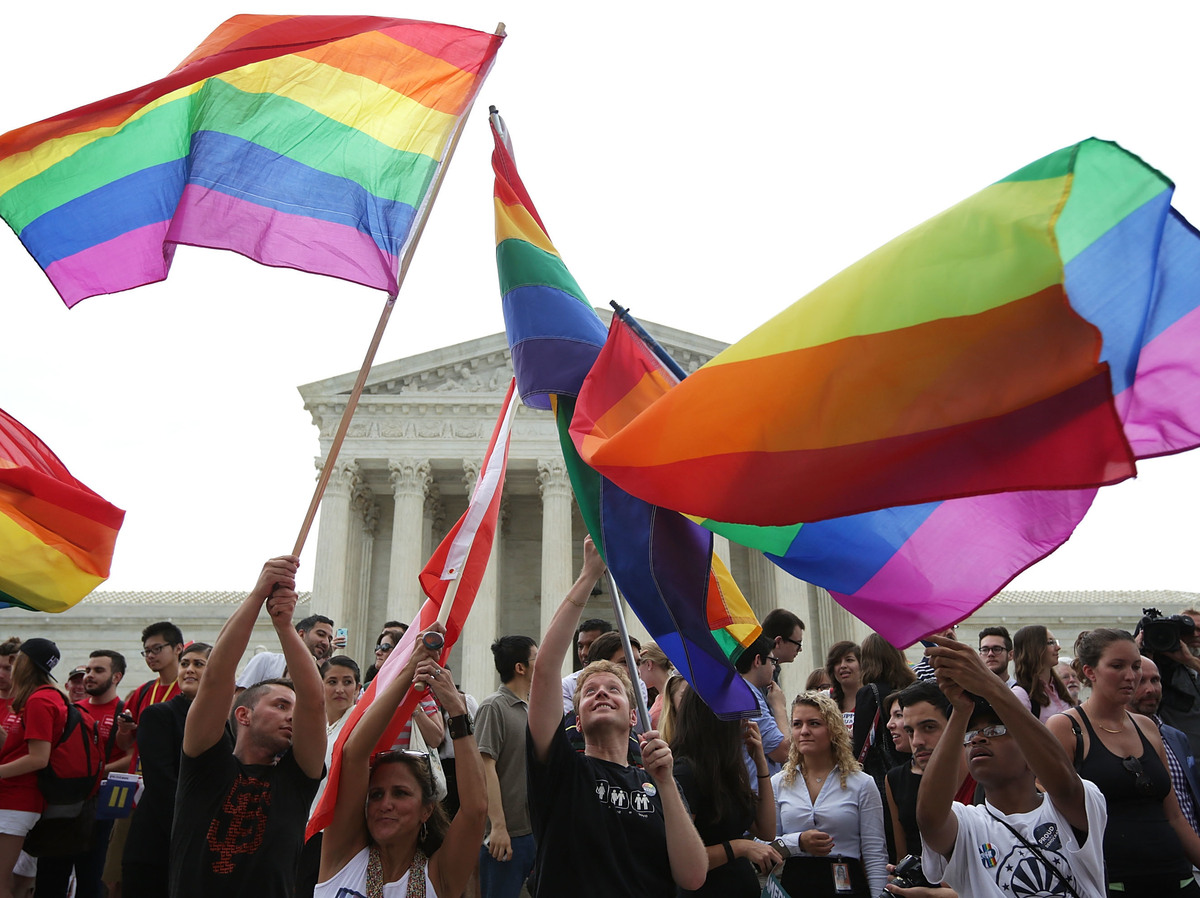 Supporters of same-sex marriage celebrate outside the Supreme Court in Washington, DC., June 26, 2015, after the high court ruled same-sex couples have the right to marry in all 50 states.

On the fifth anniversary of the historic U.S. Supreme Court decision that legalized same-sex marriage across the country, LGBTQ activists are marking the victory online.

On June 26, 2015 celebrations took place on the steps of the Supreme Court with lots of hugging and cheering. This year celebrations are more subdued and virtual because of the coronavirus pandemic.

"We will be part of a larger celebration supporting Stonewall ... Called Stonewall Day," says Sarah Kate Ellis, president and CEO of GLAAD. That online event marks the start of protests in 1969 that launched the modern gay rights movement.

Former President Barack Obama and Taylor Swift were among those who recorded congratulatory messages marking the occasion.

The celebration comes after another big Supreme Court decision last week. Justices ruled that it's illegal to fire someone because they're gay, lesbian or transgender.

Around the country people are celebrating the 2015 marriage decision in their own ways. In Durham, N.C., Barb Goldstein and Ann Willoughby looked through a scrapbook documenting their activism – including a photo of both on the front page of the local newspaper. 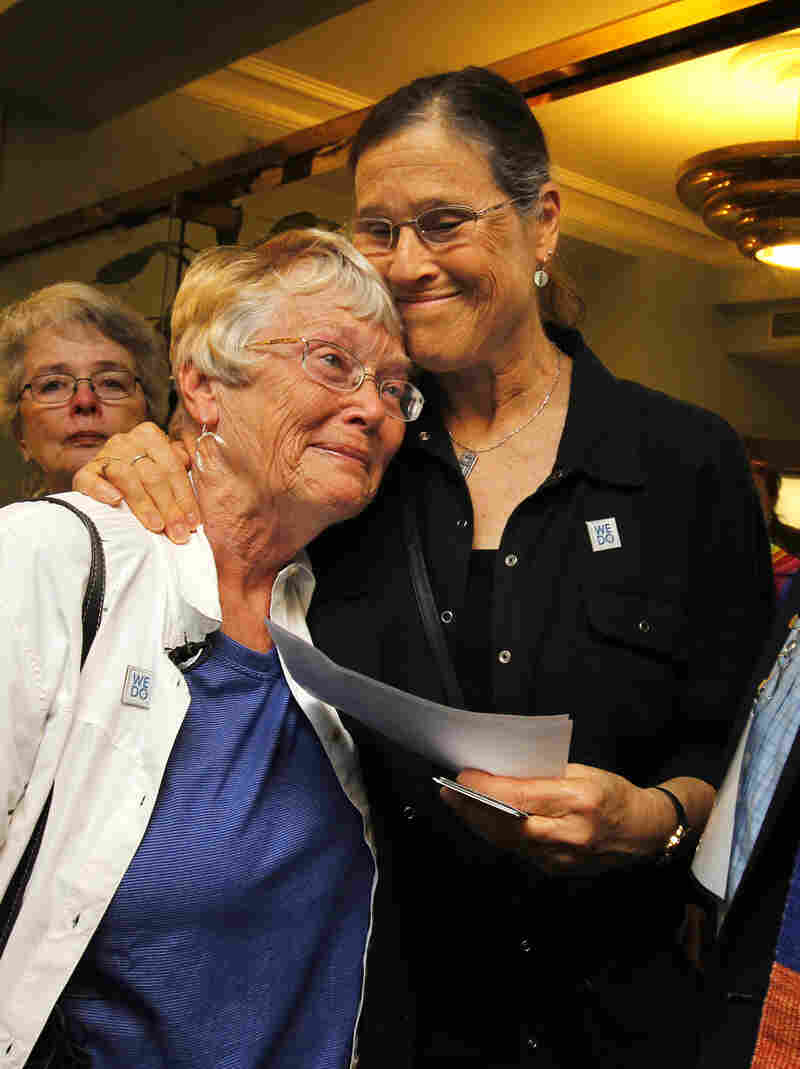 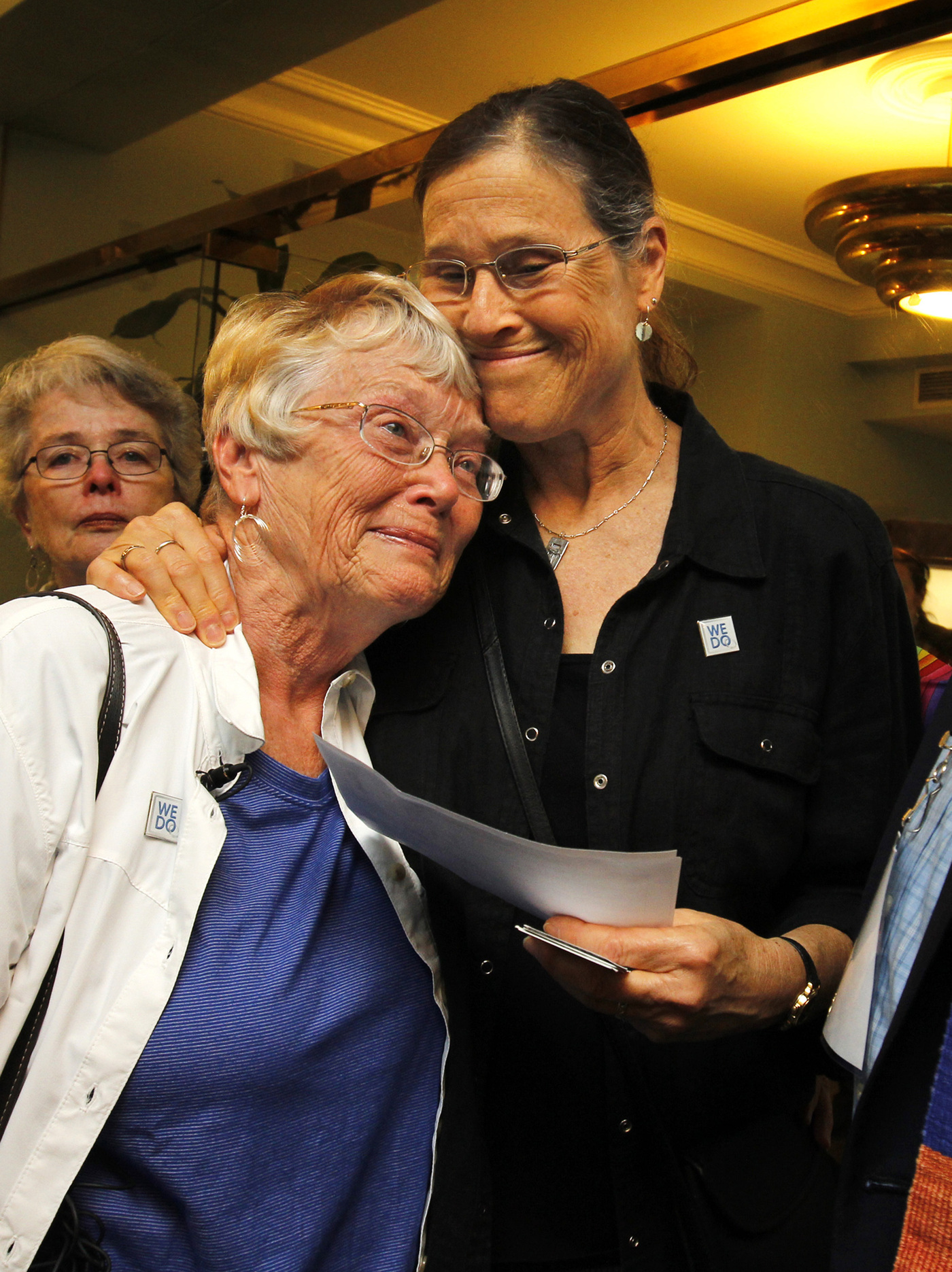 Long-time partners Ann Willoughby, left, and Barb Goldstein, from Durham, North Carolina, leave the Durham County Register of Deeds office in downtown Durham on Wednesday, May 9, 2012, comforting each other after being denied a marriage license.

"It was really a big deal, especially for Ann because she had never been open and finally she decided to just go for it," says Goldstein.

Willoughby is 84 years old and says the marriage campaign helped her come out after decades in the closet.

"The legality made me feel that, 'Hey, this is okay.' I'm a part of society. This is the way it should be – I don't need to hold back or pretend anymore," Willoughby says.

In Philadelphia, Larry Benjamin had already been with his husband for nearly two decades when the Supreme Court decision was announced. Still he says, "It was this big sigh of relief because that was it, where ever we went in the U.S. we were going to be a married couple."

"Being married is amazing. Being able to be with the person that you love is amazing," says Tori Wolfe-Sisson, who was active in marriage campaigns in the South.

Wolfe-Sisson says the Supreme Court decision has contributed to increasing acceptance of LGBTQ people. "It is shifting our culture in a way that is forcing people to accept – you have to because the law says it," Wolfe-Sisson says.

But there's still criticism that the focus on marriage pushed aside campaigns to help LGBTQ people who face multiple forms of discrimination.

"An example is a black, transgender woman. She happens to be black and faces racial oppression in this country and transgender and faces oppression because of her gender identity," says Alphonso David, president of the Human Rights Campaign.

Last fall after years of criticism David's group expanded its work for "transgender equality and justice" to address the violence and other harms trans people often face.

This pivot to transgender issues has been matched by groups that fought against same-sex-marriage. Many of them are motivated by a conservative Christian theology that sees homosexuality and being transgender as unnatural.

"The Supreme Court's Obergefell decision is just as unconstitutional today as it was the day the opinion was issued five years ago," says Abraham Hamilton III, general counsel with the American Family Association.

Despite the defeat on the marriage decision, advocates for opposite-sex-only marriages remain optimistic.

"The LGBT movement has been promoting what are, essentially, lies about the nature of humanity – the nature of the human person – and I don't think that lies can prevail forever. I think that eventually the truth will triumph," says Peter Sprigg with the Family Research Council.

These groups now use the idea of religious freedom to argue in court that discrimination against LGBTQ people should be allowed in things like public accommodations and housing. It's a legal argument that courts are less and less friendly to, especially considering the Supreme Court's decision last week on banning employment discrimination.

Discrimination based on religious freedom in housing is a special concern for older LGBTQ people.

"Eighty-five percent of continuing [care] retirement communities in this country are run by faith-based organizations," says Michael Adams, CEO of SAGE. Not all of those organizations discriminate against LGBTQ people, but Adams sees the possibility as a risk.

Five years after the Supreme Court's same-sex marriage decision, SAGE is among the groups focused on a new fight. They want to pass legislation in Congress called the "Equality Act." It would prohibit LGBTQ discrimination in a wide variety of areas, including housing and healthcare.

"That legislation really gets to the guts of what we need, in terms of legal protections in daily life," Adams says.

The Democratically-controlled House of Representatives passed the legislation more than a year ago but it has stalled in the Republican-controlled Senate.