Accessibility links
Did Sacha Baron Cohen Prank A Far-Right Militia? The actor and serial prankster Sacha Baron Cohen is suspected of infiltrating a far-right group's rally in Washington state over the weekend. 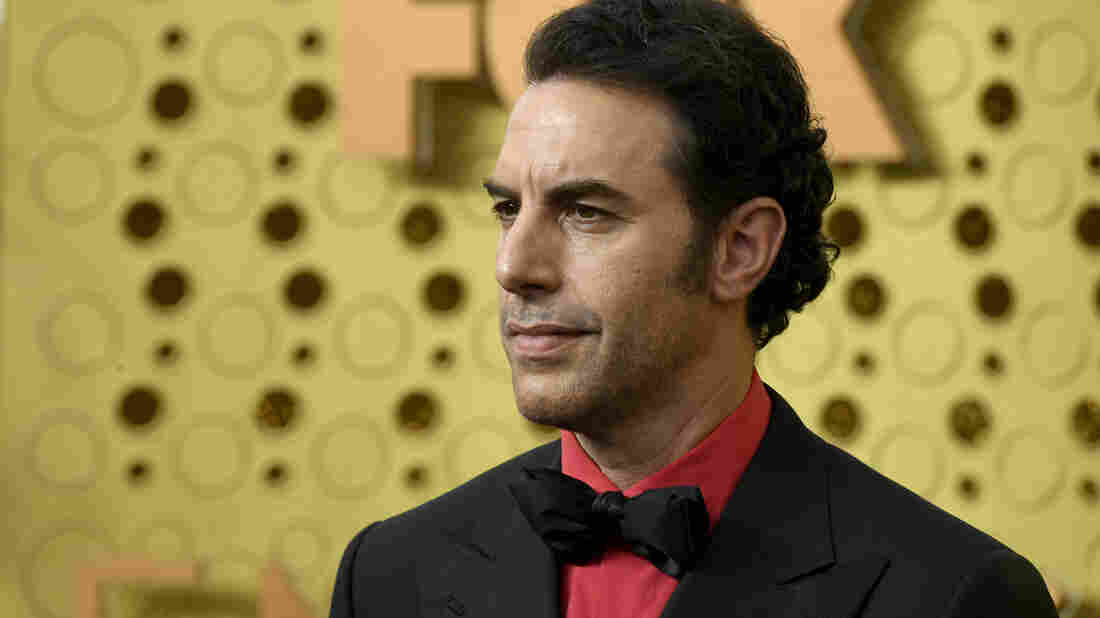 Sacha Baron Cohen, at the Emmys in 2019, is suspected of being behind a prank on a far-right group. Frazer Harrison/Getty Images hide caption 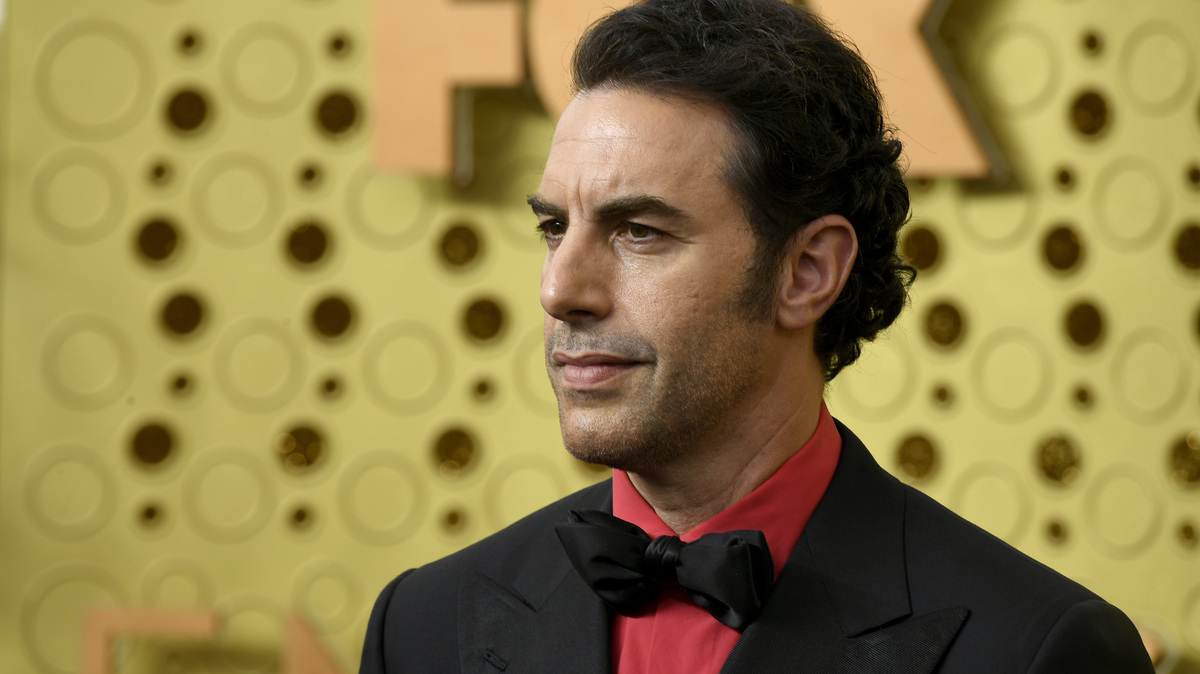 Sacha Baron Cohen, at the Emmys in 2019, is suspected of being behind a prank on a far-right group.

To put it plainly, Matt Marshall was duped.

"Yeah. I mean. It was a miss," Marshall said by phone, with a sigh.

Marshall, 36, is the founder and former leader of the Washington Three Percent, which is aligned with the far-right "Patriot" and militia movement. On Saturday, he was the emcee at a rally in Olympia, Wash., called March for Our Rights 3, a gathering of "constitutionalist" factions that extremism trackers put in the anti-government category.

The event's disastrous ending — a racist singalong seemingly staged by prankster Sacha Baron Cohen — went viral over the weekend. The apparent infiltration was the latest salvo in the culture wars, one of the endless "owns" of the other side. Leftists in Seattle trolled with glee; they've never bought into the militia makeover. The Western States Center, an Oregon-based watchdog that repeatedly has warned of the anti-government threat, said it had no information on the stunt but "found it amusing."

For Marshall, who's running for the Washington state Legislature, it was a reminder of the obstacles he and other "Patriot" movement leaders face as they try to carve a path into the mainstream.

"It was just kind of a kick in the teeth," he said.

For years, Marshall has tried to convince his critics that he and the Three Percenters reject racist ideologies such as white nationalism. So it was encouraging, he said, to learn of a California-based group, Back to Work USA, that was helping conservatives get their message out in blue states.

Marshall said the group had popped up out of nowhere a week before the rally, and offered to pay for everything. A stage adorned with balloons. A security team. And an impressive headliner: country legend Larry Gatlin of the Gatlin Brothers. Marshall provided NPR with the group's correspondence; the logo shows an idealized image of an American worker.

"We have some great ideas that we would like to pass by you and we are so excited about what you're doing!" read one purported Back to Work USA email that offered help for the rally.

Marshall said he and the other organizers asked themselves, "Is it too good to be true?" but were reassured when Back to Work USA plunked down the money for portable toilets and other necessities. Marshall estimated total costs to be in the $50,000 range; the money was paid directly to vendors, not the rally organizers.

"I mean, they played the game," Marshall said. "We talked to them about how frustrating it was to be labeled racist, and they agreed with us. Like, we really let the guard down and trusted them."

'Not A Paramilitary.' Inside A Washington Militia's Efforts To Go Mainstream

On Saturday, the rally started off according to plan. Then, Marshall said, organizers learned that another band had been added at the last minute. A bluegrass act. Marshall and his buddies were too busy setting up to vet the new performer. Besides, the sponsors had come through with Gatlin as well as a local band that was confirmed as legit.

"It all looked like it was playing out, checking out," Marshall said.

But then the new singer stepped onstage, and it became clear that something was off.

"A guy that's like wearing almost a clown suit of red, white and blue gets up there," Marshall said. "Obvious disguise. Like a fake nose and chin. And he starts playing and the first thought when you hear his voice is, 'Dude, is this like a bad impression of Borat?' "

Marshall watched as the guy in overalls belted out racist and anti-Semitic lyrics about politics and the pandemic. Even worse, some members of the audience were joining in. Photos on Marshall's Facebook page show several people in the crowd who appear to be filming audience reactions with concealed cameras and earpieces.

Marshall and his friends tried to rush the stage and cut the mic, but they were stopped by security guards the newfound sponsor had hired. Marshall was fuming.

"This is my event!" Marshall recalled thinking. "He's not going to turn my event into a racist spectacle!"

After a struggle between the Three Percenters and the guards, Marshall said, the production crew vanished. The performer, the sponsors, the band all fled to waiting cars, Marshall said. He found himself alone on stage with a visibly shocked Gatlin.

"He looked at me and said, 'Um, I thought I was coming to a Republican Second Amendment rally,' " Marshall said. "I said, 'You did come to one. Somebody's trying to hijack it. I don't know what's going on.' "

What seems to have been going on is a sophisticated prank. Photos, videos and tweets from witnesses suggest it's the work of Baron Cohen, the comedian behind the Borat character. He's also known for tricking conservatives into embarrassing situations for his TV show, Who Is America?

A representative for Baron Cohen didn't respond to a request for comment Sunday. Apart from one press release, there's little online to suggest Back to Work USA is a real organization. Calls to the number on the email went to voicemail.

"Somebody just spent a whole lot of money trying to set us up," he said.

Marshall acknowledged that some audience members sang along with the mystery performer, even to lines that were blatantly racist and anti-Semitic.

"It's sad, it's unfortunate that some people chanted back," he said.

But he also pointed to footage showing a Jewish member of the Washington Three Percent grabbing a bullhorn and trying to drown out the performance. Marshall said he estimates that half the crowd left when they heard the lyrics.

It was only after the episode, Marshall said, that he saw the photos and heard witness accounts that pointed to Baron Cohen as the culprit. He wasn't impressed.

"I know who he is, but I never followed him," Marshall said. "I never even watched Borat all the way through because I couldn't stand it."