Accessibility links
'Hamilton' Creator Lin-Manuel Miranda Says, 'The Past Isn't Done With Us' A film of the original Broadway production of Hamilton, taped in 2016, begins streaming on Disney+ on Friday. Miranda, who stars in the title role, says the production is as timely as ever. 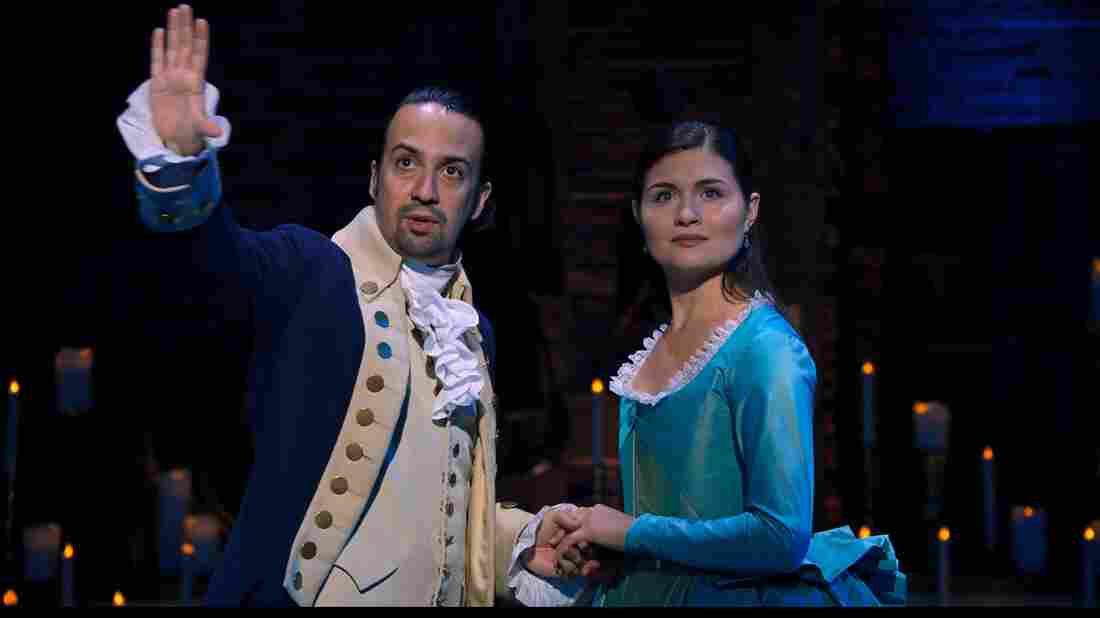 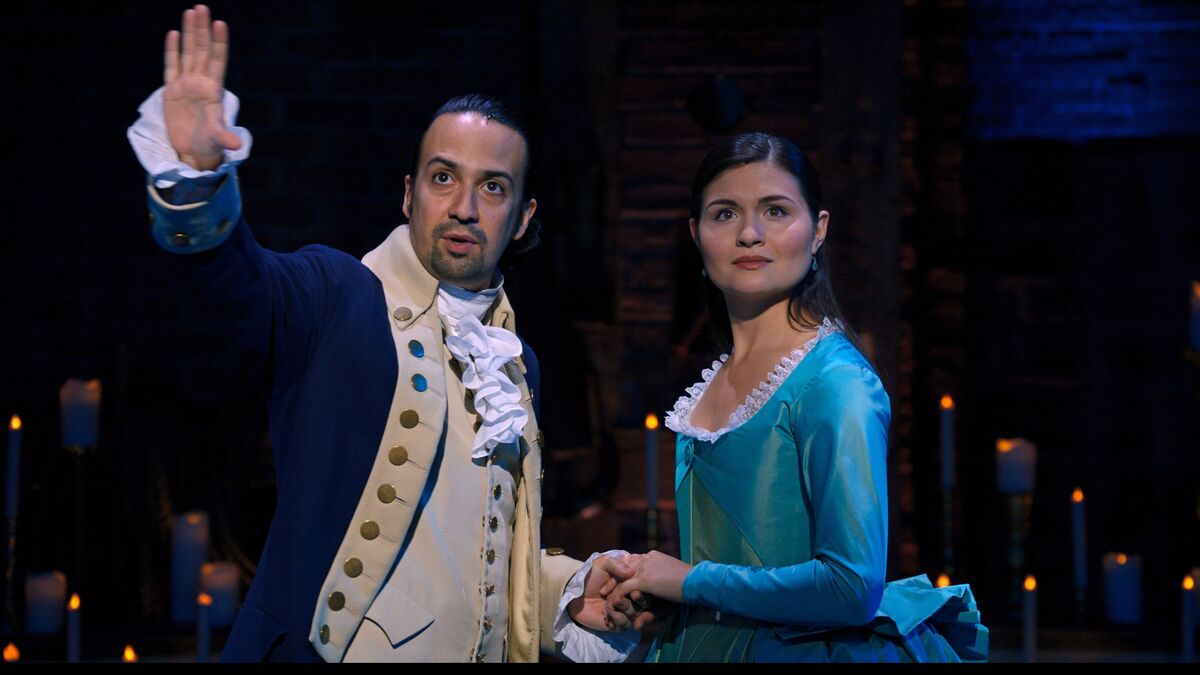 Lin-Manuel Miranda and Phillipa Soo return as Alexander and Eliza Hamilton, the roles they played in the original Broadway production of Hamilton. A film production of the show, taped in 2016, debuts on Disney+ on Friday.

For Lin-Manuel Miranda, creator of the hip-hop musical Hamilton, history always informs the present. "The past isn't done with us. Ever, ever, ever," he says.

Hamilton tells the story of the nation's Founding Fathers, including Treasury Secretary Alexander Hamilton. Miranda wrote the music and lyrics and starred in the original production, which debuted on Broadway in 2015. The production garnered 11 Tony Awards, a Pulitzer Prize for drama and a Grammy for its original cast recording.

Miranda says he's been heartened to see the musical's lyrics — including "I'm past patiently waiting" and "History has its eyes on you" — printed on signs at Black Lives Matter protests around the country.

"When you write a musical that brushes against sort of the origins of this country, it's always going to be relevant," he says. "The fights we had at the [country's] origin are the fights we're still having. ... I've always said that slavery is the original sin of this country."

A film of the original Broadway production of Hamilton, taped in 2016, will begin streaming on Disney+ on Friday. Miranda, who stars in the title role, calls the film a "a love letter and thank you" to the company.

"It's probably the best rehearsed movie cast of all time, because we'd been doing our roles for a year," Miranda says. "It's not a definitive production of a live Hamilton, but it is a snapshot of what it felt like with that company at the end of June of 2016."

[Slavery] is in the third line of our show. It's a system in which every character in our show is complicit in some way or another. And again, I think different things resonate differently. ...

Hamilton — although he voiced anti-slavery beliefs — remained complicit in the system. And other than calling out Jefferson on his hypocrisy with regards to slavery in Act 2, doesn't really say much else over the course of Act 2. And I think that's actually pretty honest. ... He didn't really do much about it after that. None of them did. None of them did enough. And we say that, too, in the final moments of the song. So that hits differently now because we're having a conversation, we're having a real reckoning of how do you uproot an original sin?

On creating Broadway roles for people of color with Hamilton

And so every time I write a piece of theater, I'm trying to get us on the board. And that continued with Hamilton, of, how can we write the parts that I didn't see existing? Really, the only thing I saw that really gave me permission to write musicals was Rent, which was an incredibly diverse cast. And I went from being a fan of musicals to writing musicals when I saw that show, because it was the thing that gave me permission. It was contemporary, and it had Latino actors and Black actors, and it told me you're allowed to write what you know into a show. No other musical had told me that. ... It's been gratifying to see how these shows Heights and Hamilton in particular, not only provide employment, but also provide like permission and amplification of a lot of other voices.

On this work being ongoing

I never bought into the illusion that the Obamas being in the White House ended racial issues in our country. Just the same way I used to get the question all the time in that first year of, "Now that Hamilton's here, do you feel like Broadway will be more diverse?" And I was like, no, because shows take years to develop. And I know what's in the pipeline, and it's not [diverse]. Next year is going to be even whiter than this year was. ... I gird myself for the whiplash in both the country and the particular corner of the world that is theater.

On being a Puerto Rican kid

I went to a school with not a lot of other Latino kids. I think [there was] one other Puerto Rican kid in my grade. And so for me, it was this fantastic secret. And my parents were so proudly Puerto Rican and so pro-learning [of our] heritage that I was proud that I got extra Three Kings Day on top of Christmas. ...

I also would spend my summers on [Puerto Rico], this beautiful island where my grandparents both worked. My grandmother ran a travel agency, and my grandfather was a bank manager. And I bounced between their businesses eating candy and left to my own devices, exploring town, and was sort of spoiled rotten in this incredible landscape. ...

So it to me, it felt additive. But it also wasn't something I brought to school much. And I think a lot of In the Heights was me learning to bring all of myself in the room. I let most folks call me Lin. My parents and my wife call me Lin-Manuel, and a lot of what In the Heights was about was bringing Lin-Manuel into the same room where Lin was writing musicals and sort of using all of myself to write.

I have to give [director] Jon [M. Chu] a lot of credit, because he had a big vision for it, and it was bigger than even my vision of it. I always sort of pictured it as this little indie musical and hopefully we could film it in our neighborhood, because I just don't think any other neighborhood looks like [New York City's] Washington Heights. Demographics aside, the hills and the bridge and the literal heights of it, I find it breathtaking every day. I breathe easier when I'm in it.

But Jon also was coming off the success of Crazy Rich Asians. And what he learned on that was, we don't get a lot of opportunities like this, so we have to swing big. And he really lobbied for a big movie that is also set in this neighborhood. And so filming last summer was one of those joyous experiences of my life because, again, I was writing songs about this neighborhood I loved to be performed onstage. But then to see those songs reinterpreted on the streets where I was writing them was breathtaking.

[I] feed so much on the energy of the city, and I miss that. One of my favorite writing spots is actually taking the train, because you kind of choose your level of engagement. I can sit in a corner of the A train. I can absorb the energy from the folks around me, whatever mariachi or break-dancing group might be happening, wherever folks are getting on and whatever lives are coming on and off the train. And I still have my headphones on and still be in my bubble and write. It's like all of the energy of interaction without necessarily being drawn out of the writing trance. So I think I miss that the most. ...

The world is being remade in a fundamentally different way because of this pandemic, and just because of where we are. And artists have to give themselves the latitude to acknowledge that. So give yourself a break if you're not writing right now.

And I find that because I'm home, it is harder to ... distance myself from those thoughts. ... And I think that's OK. Like, the world is being remade in a fundamentally different way because of this pandemic, and just because of where we are. And artists have to give themselves the latitude to acknowledge that. So give yourself a break if you're not writing right now.