Accessibility links
Golden State Killer Suspect Pleads Guilty To More Than A Dozen Murders The string of killings in the 1970s and '80s terrorized California. Joseph James DeAngelo, 74, sat in a wheelchair on Monday as he rasped out "yes" and "I admit" to charges in 13 murders. 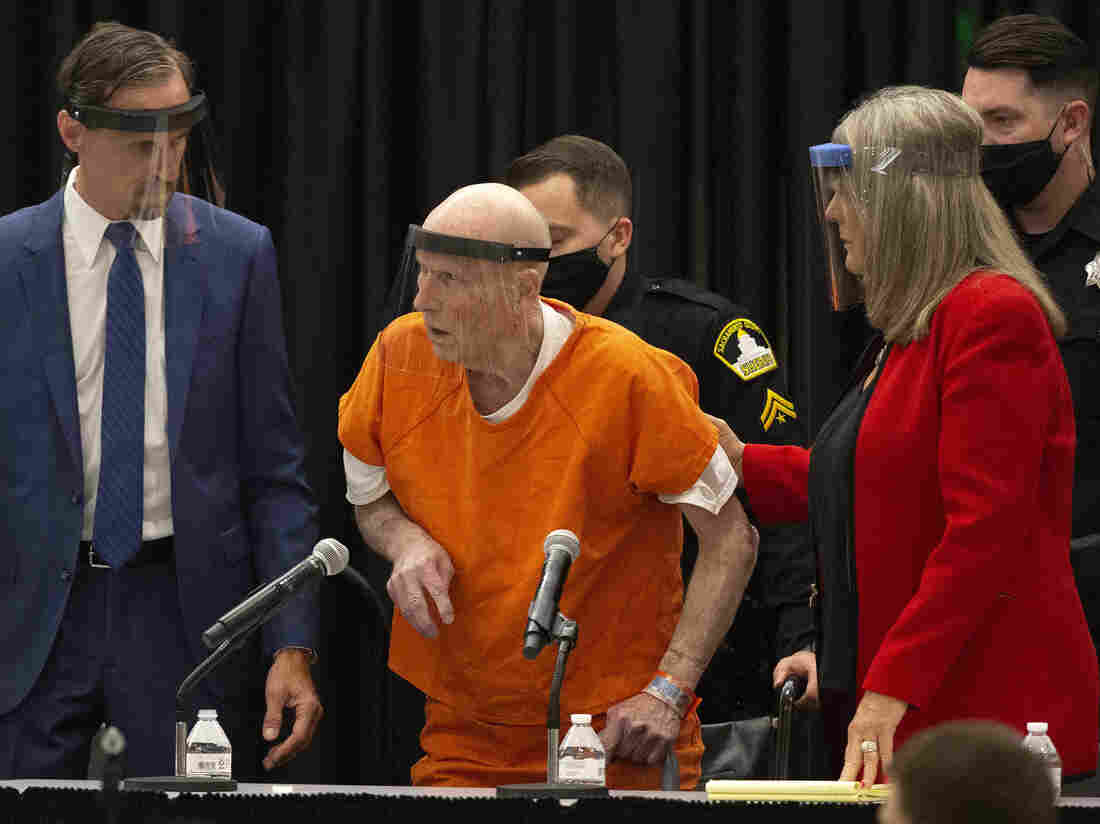 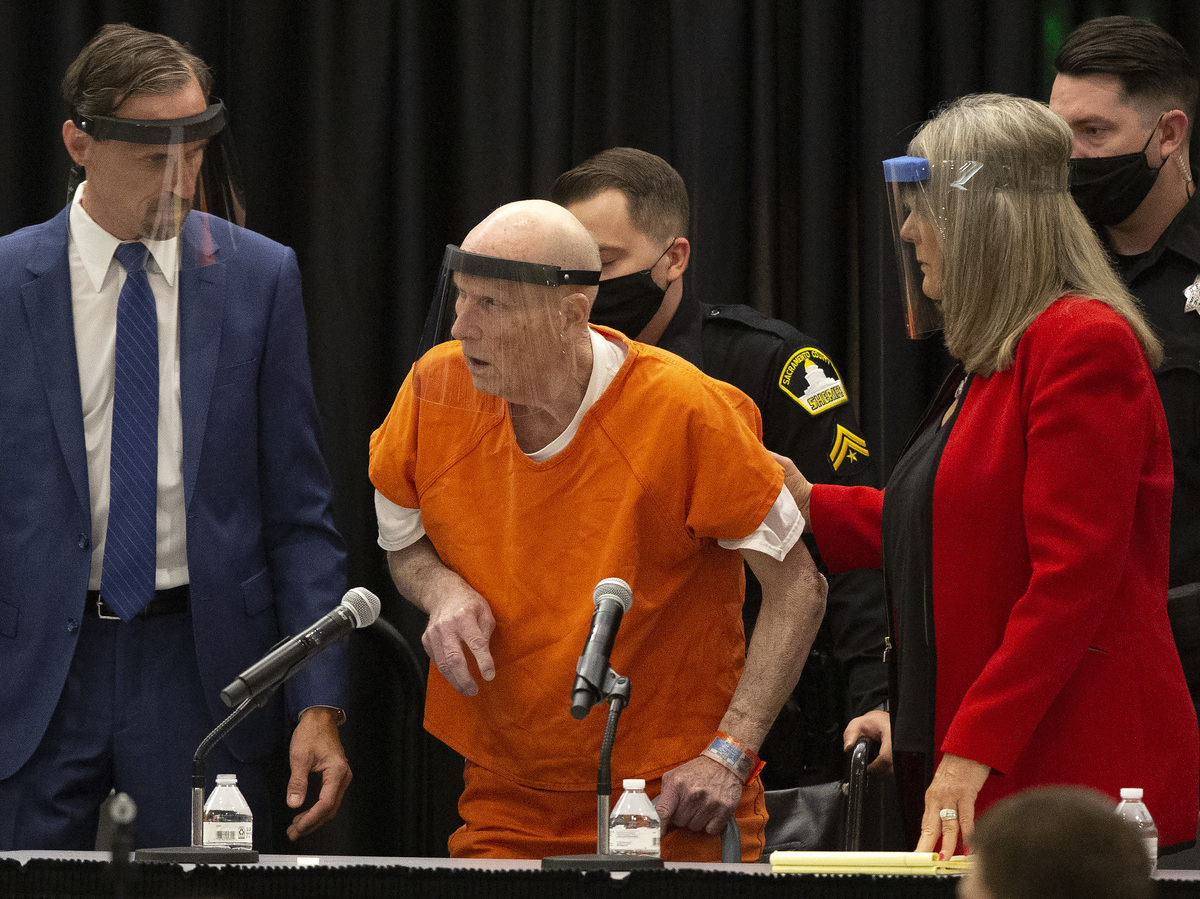 Wearing an orange jumpsuit and a clear face shield to protect against the coronavirus, former police officer Joseph James DeAngelo Jr. pleaded guilty on Monday to 13 counts of first-degree murder. The string of murders in the 1970s and '80s terrorized California, and the suspect who committed them became known as the Golden State Killer.

DeAngelo, 74, sat in a wheelchair as he rasped out "yes" and "I admit" to the charges, after prosecutors described the grisly circumstances of each crime. Otherwise, he hardly spoke and did not look at the victims' families.

"Mr. DeAngelo is acknowledging his guilt for the heinous crimes he has committed," said Contra Costa County District Attorney Diana Becton. "There is really nothing that could give full justice because he has committed horrendous acts and murder up and down the state of California. But at least we can now begin the process — after decades — to bring some closure to families."

The hearing took place in a makeshift courtroom within a ballroom at Sacramento State University, NPR's Eric Westervelt reports from the scene. The chairs in the gallery were spaced 10 feet apart for social distancing, attorneys wore face shields, and sheriff's deputies wore black face masks.

"The scope of Joseph DeAngelo's crimes is simply staggering," Sacramento County prosecutor Thien Ho said. "Each time he escaped, slipping away silently into the night."

Family members of Janelle Cruz, DeAngelo's last known victim, stood up during the reading of the circumstances of her killing. Family members of some of the other victims did the same. Family members of one the women who was raped broke into applause when the prosecutor read a victim's statement that DeAngelo had a small penis.

Sandy James held up photo of her late sister, Debbie Strauss, who she says was stalked, attacked and raped by DeAngelo.

"So this is my sister. She was victim number 26," James told NPR. "She unfortunately passed away two years before this monster was caught."

Strauss' rape is one of dozens that DeAngelo admitted to but could not be charged with because too much time has passed for him to be prosecuted.

Even so, James says just the acknowledgement of the crimes is important. "I think it's the best we're going to get. It's really hard. She should be here," she said. "I wish she were here for this. But we're doing our best to represent her to make sure she didn't get lost in all this and that she's getting her justice."

A family member of "Jane Doe #8" held up a photo of the victim and demanded of DeAngelo: "Lift up your face and look at her face."

The judge responded: "You'll have a chance to speak at the victim impact."

The long-unsolved murders grabbed headlines anew in 2018 when law enforcement officers announced they had identified DeAngelo as the suspect using DNA from a publicly available genealogy website to crack the case.

In Hunt For Golden State Killer, Investigators Uploaded His DNA To Genealogy Site

Investigators used the DNA evidence from one of the murder scenes to create a profile of the killer, which they then uploaded to the genealogy website. That site linked the killer's profile to a distant relative of DeAngelo. Investigators then confirmed the link by collecting DeAngelo's DNA from his car door and a discarded tissue, according to The Associated Press.

DeAngelo's attorneys struck a plea deal with prosecutors that means DeAngelo will avoid the death penalty. California has not executed an inmate since 2006. In March 2019, Gov. Gavin Newsom signed an executive order instituting a moratorium on the death penalty in the state. DeAngelo will face consecutive life sentences with no chance of parole.

The use of genealogy data to find a murder suspect has raised privacy concerns. People who decide to have their DNA analyzed by popular services are potentially giving away data that could point to their relatives and their descendants.

"The police currently [are] using these techniques to find ... [murderers] and bad people," researcher Yaniv Erlich told NPR's Rob Stein in 2018. "But are we OK with using this technique to identify people in a political demonstration who left their DNA behind? There are many scenarios that you can think about misuse."