Accessibility links
Afghan Interpreter Who Saved U.S. Troops Gets American Citizenship Janis Shinwari, an Afghan interpreter for the U.S. military, grabbed a rifle in the heat of battle and saved U.S. troops in 2008. Twelve years later, he became a U.S. citizen. 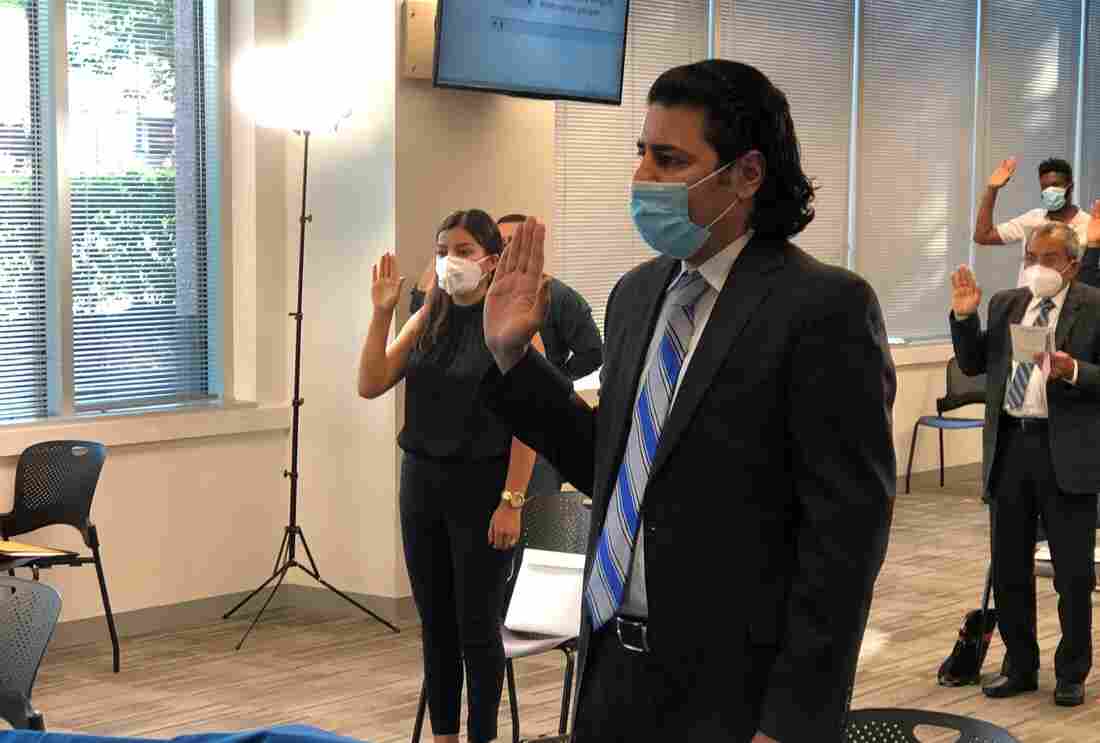 Janis Shinwari takes his oath Monday as a naturalized U.S. citizen in a ceremony in Fairfax, Va. He worked eight years as an Afghan interpreter with the U.S. military in his homeland, and was credited with saving the lives of five U.S. troops. Greg Myre/NPR hide caption 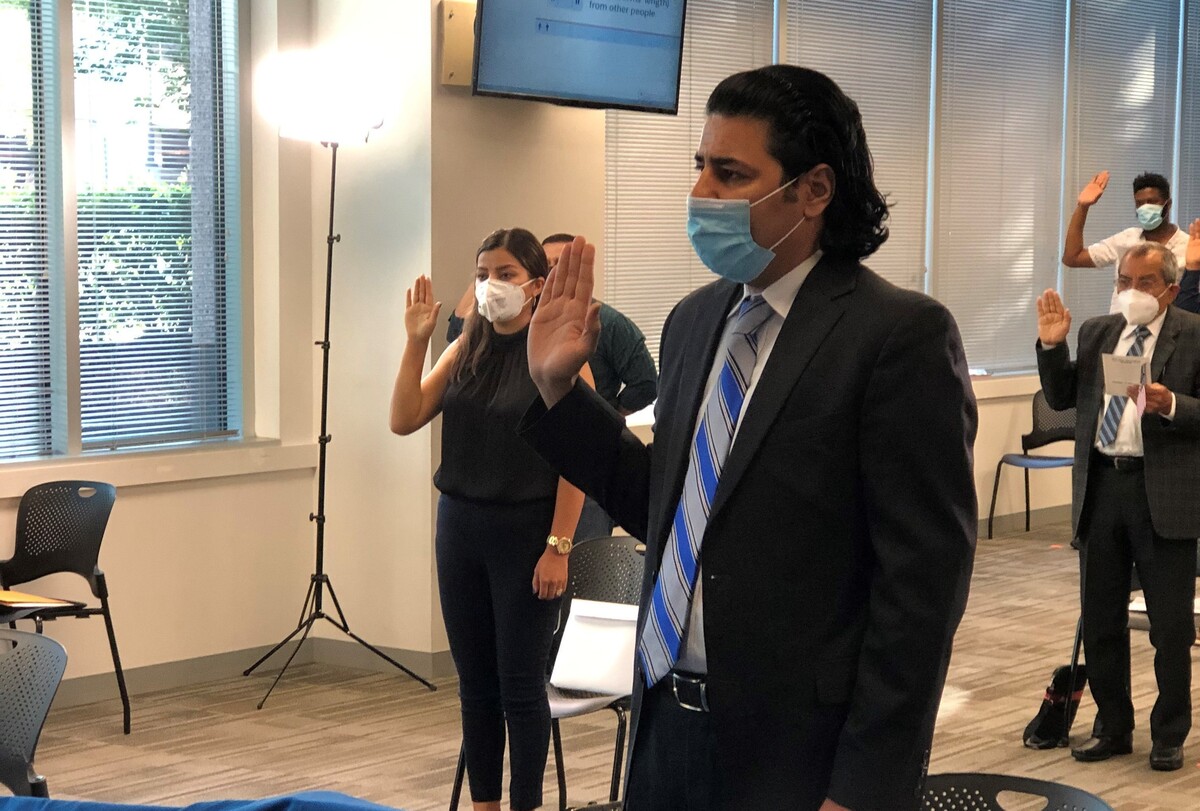 Janis Shinwari takes his oath Monday as a naturalized U.S. citizen in a ceremony in Fairfax, Va. He worked eight years as an Afghan interpreter with the U.S. military in his homeland, and was credited with saving the lives of five U.S. troops.

Many immigrants have inspiring stories. Then there's Janis Shinwari, who worked eight years as an Afghan interpreter with the U.S. military in some of the most dangerous parts of his homeland.

"During his service, he saved the lives of five American soldiers. That is not something many people can say," Ken Cuccinelli, the acting director of Citizenship and Immigration Services.

Socially distanced and wearing masks, 170 immigrants became the newest American citizens Monday in a series back-to-back naturalization ceremonies in Fairfax, Virgina. About 15 took the oath at a time to guard against overcrowding in the government office.

As an interpreter, Shinwari wasn't supposed to fight when he joined the U.S. military in 2004. But four years later, he was with an American unit that was ambushed by the Taliban in eastern Afrghanistan.

"It was the worst firefight of my life," Army Capt. Matt Zeller told NPR in 2013. "I ran out of grenades. I was literally counting my bullets, and I remember thinking, we might not make it out of this one alive."

Shinwari grabbed a rifle and rushed to the scene.

"I saw Matt Zeller, that he was alive in a ditch and there were two Taliban behind him to kill him," Shinwari recalled. "I shot the two Taliban and I saved Matt Zeller's life."

They had met just 10 days earlier, and have been close friends ever since.

The U.S. government has had programs to bring both Afghan and Iraqi interpreters to the U.S. after their service in those wars. The Iraqi program was shut down several years ago, while the Afghan program is still operating. But both were plagued by delays and issued far fewer visas than allocated.

Shinwari had to wait nearly three years for a visa. He was on a Taliban kill list and spent most of that time on a U.S. military base near Kabul for his own safety. Only rarely could he travel a few miles to his home for brief visits with his wife and two young children.

"That was really hard for me that I couldn't see my kids for a while," he said. "The saddest part was that my kids couldn't go outside to play with the other kids because of some security reasons. They were home all the time." 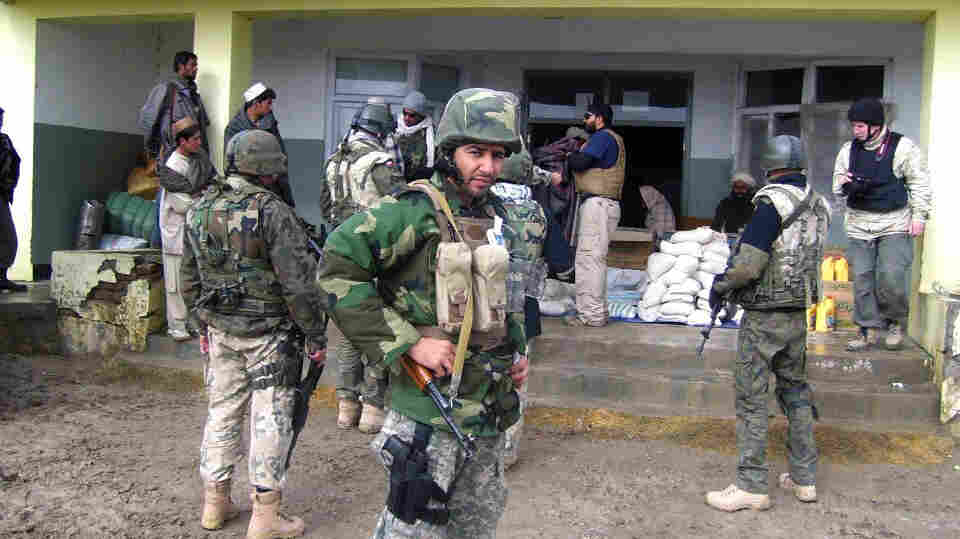 Janis Shinwari wearing his body armor in Afghanistan in 2008. He worked with U.S. troops in some of the most dangerous parts of the country, and the Taliban put him on a 'kill list.' Matt Zeller hide caption 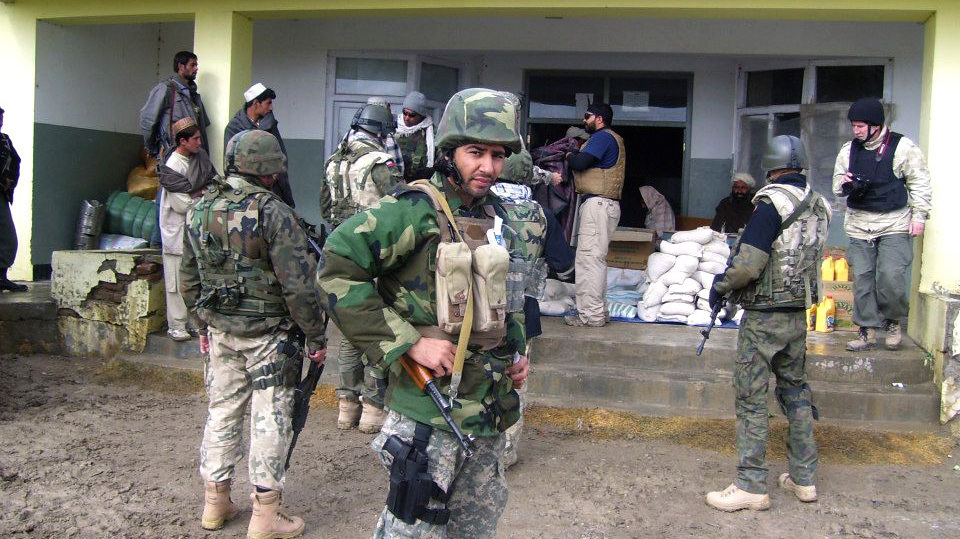 Janis Shinwari wearing his body armor in Afghanistan in 2008. He worked with U.S. troops in some of the most dangerous parts of the country, and the Taliban put him on a 'kill list.'

But Shinwari declined the money. Instead he and Zeller used it to set up No One Left Behind, a nonprofit that works to bring interpreters to the U.S.

"This is our responsibility that we should keep our promise, that we promise these gentlemen in Afghanistan, that if you serve for two years, you are eligible for a U.S. visa," Shinwari said.

More than 18,000 former interpreters are still awaiting those visas. A similar number have come already to the U.S. The transition can be difficult, with many struggling to get by with low-paying jobs.

Shinwari, 42, said he's been fortunate. He says he's still saving lives by working at a Briartek, a company that makes rescue beacons for sailors. The U.S. military is a client.

He says he's grateful for his new life.

"The best part is you're safe. You don't have to worry, you can sleep well. Once you are here, you're free," he said.

And then he headed off to work. He said his company has remained open during the Covid pandemic, and he hasn't missed a day of work.