Accessibility links
Supreme Court: Montana Can't Exclude Religious Schools From Scholarship Program The 5-4 decision, in which Chief Justice John Roberts joined the court's other conservatives, is a win for parents who wanted to use the state tax credit to help send children to religious schools. 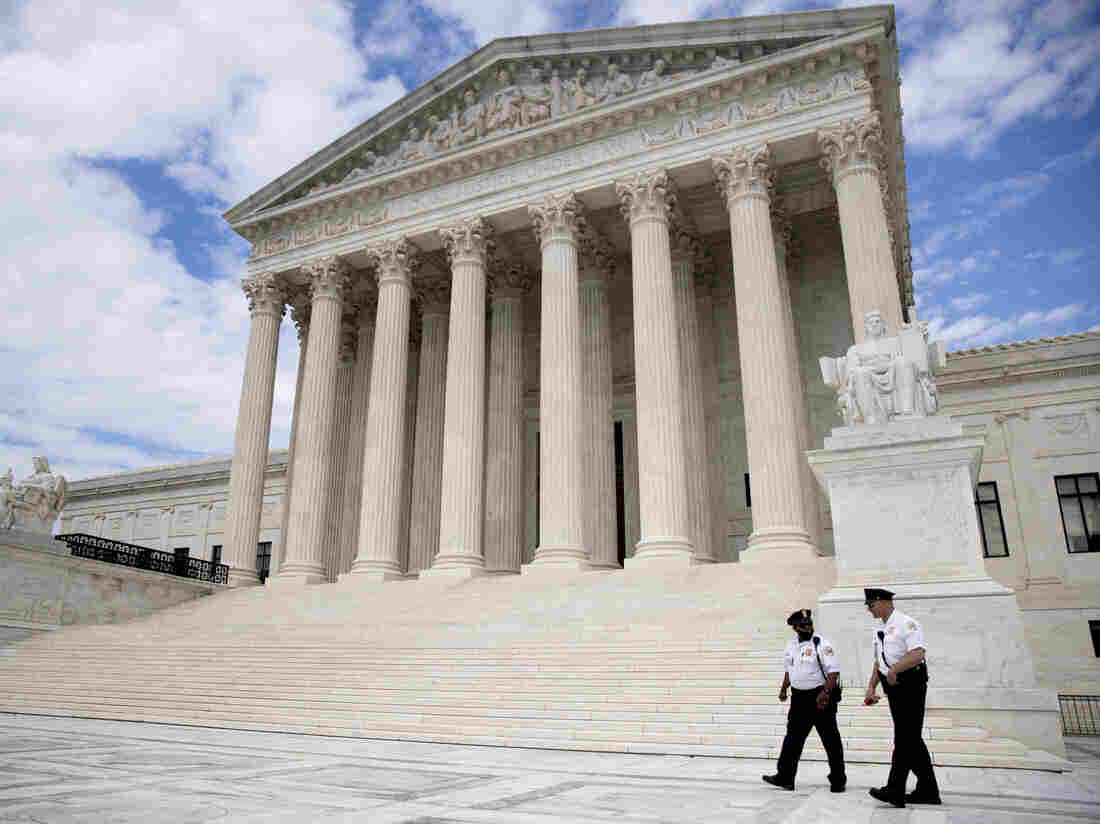 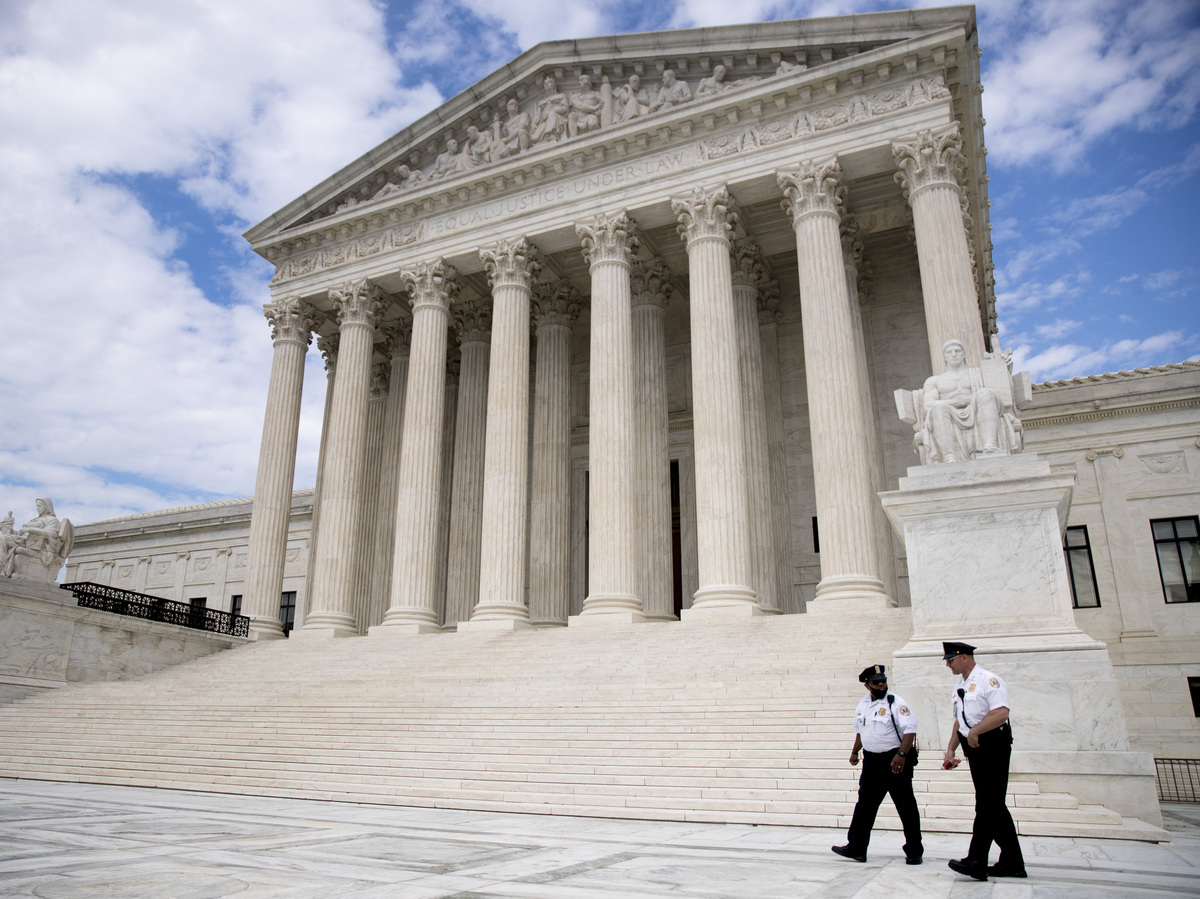 In a major victory for what advocates call the school choice movement, the U.S. Supreme Court effectively killed state constitutional provisions in as many as 38 states that bar taxpayer aid to parochial schools. The vote was 5-4, with Chief Justice John Roberts writing the decision for the court's conservative justices.

Tuesday's case began in 2015 when the Montana Legislature passed a bill providing a dollar-for-dollar tax credit for individuals who donate to organizations that provide scholarship money to students in private schools. An organization called Big Sky began raising money to fund these scholarships, using the tax credit as an incentive. Of the 13 schools that got scholarship money from Big Sky, 12 were religious schools. Indeed, 70% of all private schools in Montana are religiously affiliated.

Ultimately, the Montana Supreme Court struck down the entire tax credit program for all private schools, religious and nonreligious alike. It said the tax credit conflicted with the state Constitution, which bars all state aid for religious education, whether direct or indirect, including tax subsidies such as this one.

But in Tuesday's opinion, Roberts said the state court had it backward.

"A state need not subsidize private education, but once it decides to do so it cannot disqualify some private schools because they are religious," he wrote. Thus the tax credit created by the Montana Legislature to benefit students attending qualifying private schools, including religious ones, must stand as originally designed.

In dissent, Justice Ruth Bader Ginsburg rebutted Roberts' argument. She said that because the Montana Supreme Court invalidated the program entirely, it did not discriminate against students attending religious schools at all. Because the state court's "judgment put all private school parents in the same boat—this Court had no occasion to address the matter," Ginsburg wrote.

In a separate dissent, Justices Stephen Breyer asked: "What are the limits of the Court's holding?" He feared that the court's logic could lead to extreme consequences in the future, perhaps even a decision requiring states to fund private religious schools even if they would rather use their money to fund public schools exclusively.

As for the conservative wing of the court, all of its members signed on to the Roberts opinion, but several of them wrote separately to express their own views on the subject. Justice Clarence Thomas reiterated his view that the Constitution's ban on the establishment of religion does not apply to the states, except in cases of coercion.

Justice Neil Gorsuch urged the court to go further to protect the free exercise of religion. While the majority said that Montana had impermissibly discriminated on the basis of the schools' religious status, Gorsuch said the state , discriminated on the basis of religious activity as well. As an example, he pointed to the lead plaintiff's testimony that "she would like to use scholarship funds to enable her daughters to be taught in school the 'same Christian values' they are taught at home. The court, said Gorsuch, should make it clear that both types of discrimination are unconstitutional.

Justice Samuel Alito used his concurrence to recount the troubled history of the so-called "baby Blaine amendments," no-aid provisions in the state constitutions of 38 states that, like the Montana Constitution, prohibit public funds from benefiting religious schools.

Such provisions are named after James G. Blaine, who proposed a similar amendment to the U.S. Constitution in 1875. While the original amendment failed to pass, variations of it were adopted in most states. Many scholars today view the adoption of these amendments, mostly in the late 1800s, as a bigoted reaction to the mass immigration of Catholics into the U.S., a narrative that Alito embraced wholeheartedly.

But many states in modern times have, by referenda, refused to abandon the no-religious aid concept. And Montana's no-aid provision is no relic of the past. The state constitution was completely rewritten in 1972.

Mae Nan Ellingson, one of the delegates to the 1972 constitutional convention, said that ultimately the convention adopted the no-aid amendment in part "to protect religious liberty" and that the no-aid provision was "never even a threshold issue."

Regardless of their origins, experts on both sides of the issue agreed that the practical effect of Tuesday's decision is to neuter these state constitutional provisions, which until now have limited state aid to religious schools to one degree or another.

Francisco Negron, chief legal officer for the National School Boards Association, said that these provisions are "near death."

Dick Komer, a senior attorney at the Institute for Justice, which brought Tuesday's case on behalf of several parents with children in religious schools in Montana, called on state legislators to capitalize on the moment to create programs that allow state funds to benefit private religious schools.

"The legal impediments to effective school choice programs are now removed, and it's up to state legislatures now to move forward," Komer said after the decision was announced.

Publicly funded voucher and tax credit programs currently provide aid to private schools in 26 states, according to John Schilling, president of one of the country's leading school choice advocacy organizations, the American Federation for Children.

"What we would like to see is state policymakers really step up to the plate here and expand ... school choice programs, and to enact it in the 24 states that don't have these programs," Schilling said.

Stanford Law School professor Michael McConnell said he saw the decision as good for education all around.

"When you have a state where ... a significant minority of parents are using private schools, they're going to be voting against increasing taxes for public education," he said. "But if they are able to share in the education pot, they may move to supporters of greater aid to education."

Until now, these aid programs, which mainly benefit private religious schools, have amounted to a relatively small $2.6 billion in aid out of more than $700 billion spent on public education each year, according to Schilling. But school choice advocates, including U.S. Education Secretary Betsy DeVos, have pushed hard to increase the funding for what she calls faith-based education.

If the state is going to funnel more money to private education, said Negron, the National School Boards Association lawyer, that will likely provoke more litigation.

He said some states might look at Tuesday's decision and say, "If you're going to take state money," then "you can't discriminate against students on the basis of sexual orientation." Or states may condition public funds on satisfying public health requirements, "which means that all children have to [be] vaccinated."

Colorado Attorney General Phil Weiser, who filed a brief on behalf of nine states in the Montana case, said that funding private schools can have unexpected political consequences. He noted that when the school board in Douglas County, a suburb south of Denver, adopted a program that threatened to siphon public money from public schools, "there was a huge backlash," and "the school board that pushed the program got voted out as well."

That said, Tuesday's ruling was a personal victory for the parents who challenged the Montana ban on aid to religious schools.

Kendra Espinoza, the lead plaintiff, was elated. Earlier this year, the office manager explained why she worked extra jobs so that her two daughters could attend the Stillwater Christian School in Kalispell, Mont. "At home we are a Christian family and I want those values taught at school," she said.

Among those cheering Tuesday's ruling was the Trump administration, which supported Espinoza's case in the Supreme Court. At the White House, press secretary Kayleigh McEnany issued a statement saying: "The Trump administration believes that school choice is a civil rights issue, and that no parent should be forced to send their child to a failing school."

Andrea Picciotti-Bayer, legal adviser for the Catholic Association, called it "a welcome victory for religious freedom and countless American families," adding it will give "low-income students a chance to attend religious schools of their choice using state-endorsed private school scholarship funds."

But Lily Eskelsen García, the head of the country's largest teachers union, called the decision "shameful and unacceptable." In a statement, she said: "At a time when public schools nationwide already are grappling with protecting and providing for students despite a pandemic and mounting budget shortfalls, the court has made things even worse opening the door for further attacks on state decisions not to fund religious schools."

Though a sweeping victory for school choice advocates, the court's opinion still leaves some questions unanswered.

David Strauss, a law professor at the University of Chicago, observed that the two religion clauses of the First Amendment are often in tension.

"We want a principle that says the government shouldn't be paying the salaries of members of the clergy," he said. "But on the other hand, if a fire breaks out in a church, you don't want the fire department saying, 'Oh wait a second, it's a church; we can't put out the fire.' "