Accessibility links
At Senate Hearing, Fauci Warns Coronavirus Cases Could Reach 100K A Day The Committee on Health, Education, Labor and Pensions convened Tuesday to address plans to reopen schools and workplaces amid the coronavirus pandemic. 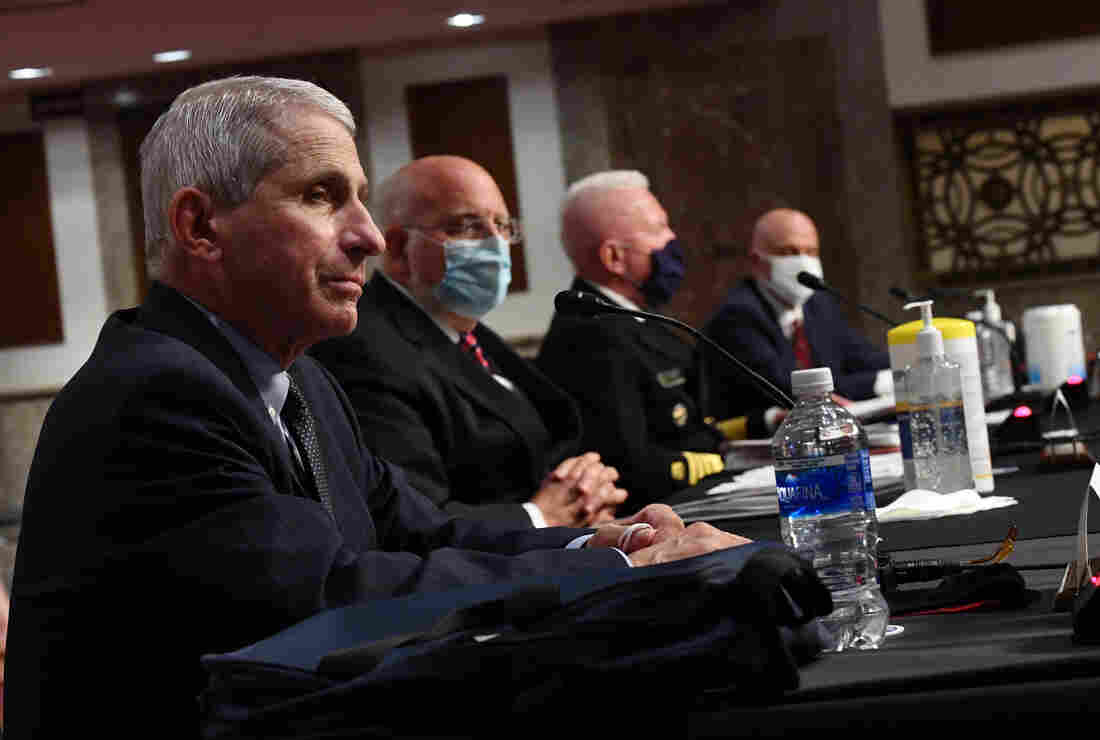 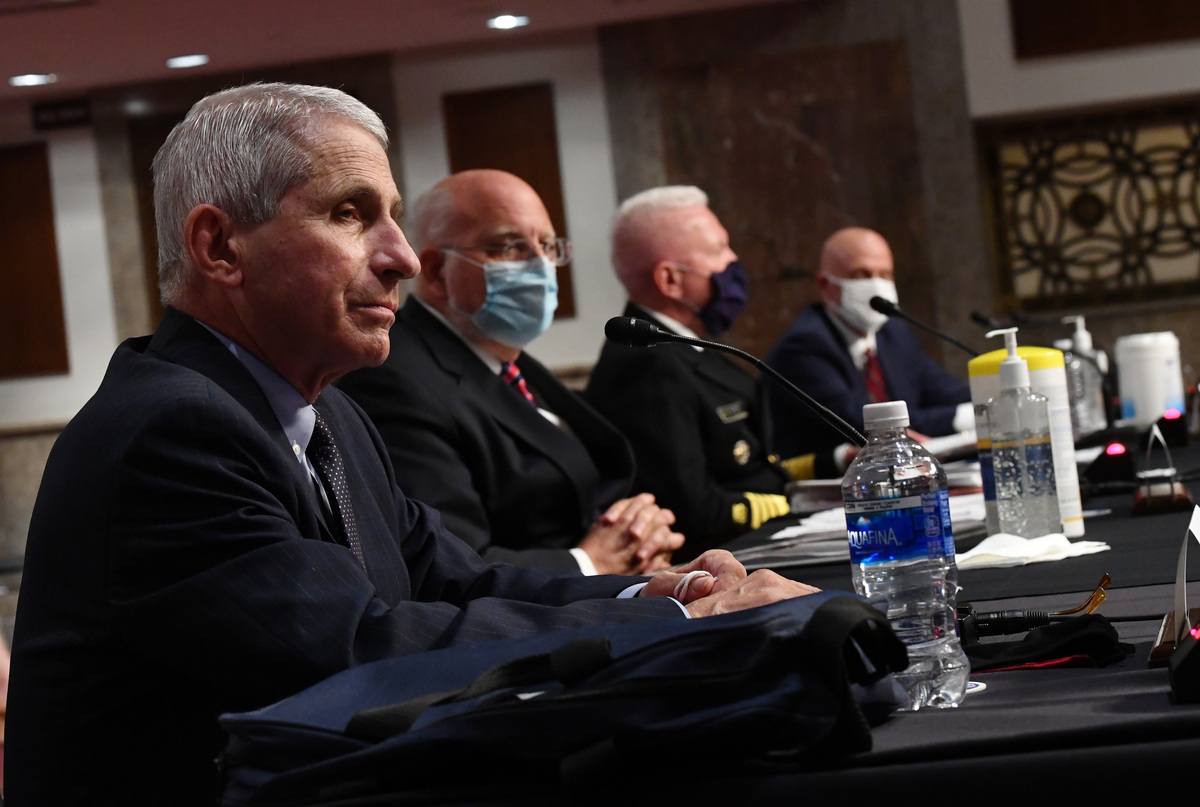 Dr. Anthony Fauci and other top government health officials testify before the Senate health and education committee on Tuesday.

Dr. Anthony Fauci, the country's top infectious disease expert, told members of Congress on Tuesday that although he can't predict the ultimate number of infections and deaths related to the coronavirus, "it's going to be very disturbing."

"When you have an outbreak in one part of the country, even though in other parts of the country they're doing well, they are vulnerable," he said. "We can't just focus on those areas that are having the surge. It puts the entire country at risk. We are now having 40-plus thousand new cases a day. I would not be surprised if we go up to 100,000 a day if this does not turn around," he told the Senate Committee on Health, Education, Labor and Pensions, which convened to discuss plans for reopening schools and offices that have been shuttered by the deadly coronavirus pandemic.

Trump Seems To Have 'Surrendered' On The Pandemic, Biden Says

"Unfortunately, this simple life-saving practice has become part of the political debate that says if you're for [President] Trump, you don't wear a mask, if you're against Trump, you do," Alexander said. "That's why I've suggested that the president occasionally wear a mask, even though in most cases it's not necessary for him to do so. The president has plenty of admirers. They would follow his lead."

Sen. Bernie Sanders, I-Vt., asked the panelists whether they would support an effort to increase the production of masks in this country and distribute them free of charge.

"There's no doubt that wearing masks protects you," Fauci said. "Anything that furthers the use of masks, whether it's giving out free masks or any other mechanism, I am thoroughly in favor of."

Redfield concurred, calling universal mask-wearing "the most important thing we can do."

Fauci said it is clear that some parts of the country skipped over checkpoints or guidelines for determining when to reopen. He added that even in states that followed the rules, it appears people are taking an "all-or-nothing approach" when it comes to social distancing and wearing face masks.

"Either be locked down or you see people in bars, not wearing masks, not avoiding crowds, not paying attention to physical distancing," Fauci described. "I think we need to emphasize the responsibility we have both as individuals and as part of a societal effort to ending the epidemic."

Giroir echoed that sentiment, saying he's concerned about the recent data from several states that indicate a rise in infections and an uptick in hospitalizations.

"We can reverse these concerning trends, if we work together," Giroir said. "We must take personal responsibility and be disciplined about our own behavior. Maintain physical distancing, wear a face covering whenever you can't physically distance, wash your hands, stay at home if you feel sick."

Regarding a potential vaccine, Fauci said that while health officials are hopeful, there's "no guarantee" the U.S. will develop a "safe and effective" vaccine for the coronavirus.

"But we are cautiously optimistic, looking at animal data and the early preliminary data, that we will at least know the extent of efficacy sometime in the winter and early part of next year. ... Hopefully, there will be doses available by the beginning of next year," he said.

Fauci also said that questions remain about how long someone who received a vaccination would retain immunity and that the "durability" of immunity could influence how often someone would need to receive an updated vaccine.

The panel also addressed the skepticism that still remains within the country over the safety of a vaccine.

"Public confidence in vaccines is so important," Redfield said. "We have an obligation to use all of our scientific knowledge, our regulatory framework to ensure that any vaccine that comes before us, whether for authorization or approval, meets our stringent standards for safety and effectiveness."

Fauci told Sen. Rand Paul, R-Ky., that local officials should make the decision to reopen schools based on the prevalence of the virus in their district.

"I feel very strongly we need to do whatever we can to get the children back to school. So I think we are in locked agreement with that."

He suggested that there could be "creative" measures to modify a school's schedule and structure to allow for a reopening of some kind.

Hahn said he was optimistic about possible treatments for coronavirus for adults by the fall.

He noted that remdesivir, an antiviral medication, has shown a reduction in hospitalization days among COVID-19 patients.

"Convalescent plasma, we have evaluated the safety through a large expanded access program at the Mayo Clinic and it's been found to be safe, and over 20,000 patients who administered it," Hahn said.

"That antibody data will help us in terms of the development of monoclonal antibodies," he described.

"Monoclonal antibodies are synthetic antibodies that the theory is will provide protection against the infection of the virus, and we're hopeful that those studies by the late summer, early fall will provide us information about their effectiveness and safety," Hahn explained.

Redfield said there was "substantial disappointment" with the recent announcement that American Airlines plans to begin booking flights to full capacity. Redfield did not commit to any action when asked by Sanders whether the federal government plans to impose guidelines or requirements for social distancing on airlines or buses.

"I can say this is under critical review by us at CDC," Redfield said. "We don't think it's the right message. ... Again, we think it's really important that individuals that are in whether it's a bus or a train or a plane are social distancing to the degree that it is feasible or at least have a reliable face covering."

The hearing comes as cases of the deadly respiratory virus have spiked across the United States, following calls from Trump for states to reopen their economies and phase back into normal operations, despite health experts' guidance.

The president himself has bucked conventional wisdom on slowing the spread of COVID-19, holding large in-person events as part of his reelection campaign.

So far, more than 125,000 people in the U.S. have died from coronavirus infections, according to the CDC. The U.S. has had some 2.5 million confirmed cases.