Accessibility links
Reverse Parade Allows Revelry From A Social Distance The pandemic pushed one community in suburban Cincinnati to get creative about its July Fourth festivities.

Listen · 3:08 3:08
This Reverse Parade Will Allow July Fourth Revelry From A Social Distance 3:08 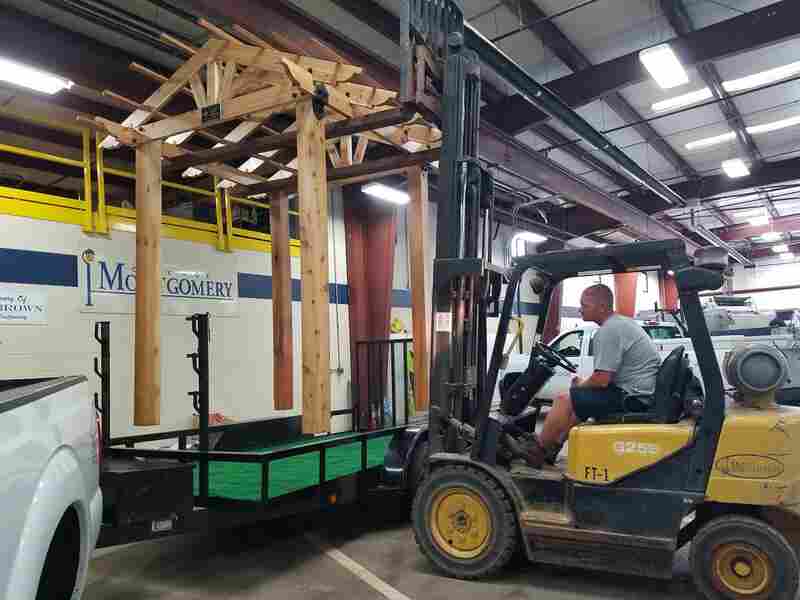 An employee with the city of Montgomery, Ohio lowers a wooden pergola onto a flatbed trailer. It will be transformed into a patriotic park scene with bunting, banners and flags. Many participants in the reverse parade are repurposing previous years' floats because of COVID-19 restrictions on gathering. Tana Weingartner/WVXU hide caption 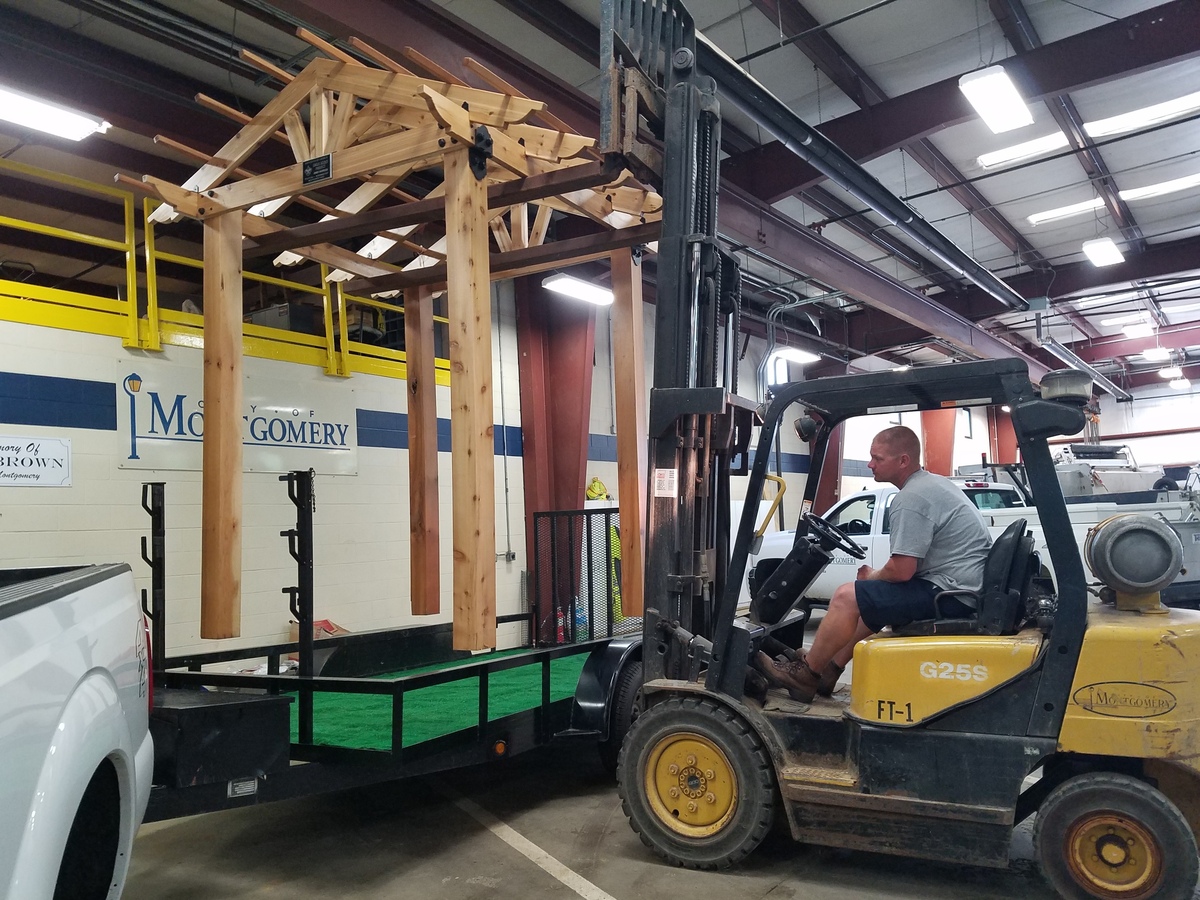 An employee with the city of Montgomery, Ohio lowers a wooden pergola onto a flatbed trailer. It will be transformed into a patriotic park scene with bunting, banners and flags. Many participants in the reverse parade are repurposing previous years' floats because of COVID-19 restrictions on gathering.

A typical Fourth of July usually has lots of flags, fireworks and parades. But this year is anything but typical as the pandemic has benched marching bands, banned floats, and sidelined spectators.

In Montgomery, Ohio — a small suburban Cincinnati community of about 10,000 where lawns are lush green and American flags abound — the annual Fourth of July parade is a long tradition. So when the pandemic threatened to cancel the annual parade, they decided to retool it.

This year Montgomery is having a reverse parade where the units are stationary and motorists drive through, says Julie Machon, as she stands in a driveway overlooking a large high school parking lot. Each of the 50 or so parade entrants will have their own space safely apart from each other, kind of like a big flea market, according to Machon, the city's recreation director. Spectators, however, will stay in their cars and weave up and down the aisles.

The fire department will suspend a giant American Flag from a ladder truck. The marching band is out but a small ensemble of students will play patriotic tunes. There will be classic cars, the American Legion and Purple Heart Veterans, and performers from the Cincinnati Circus Company, where Ali Weibel is creative director.

How To Celebrate July 4th Safely During The Coronavirus Pandemic

How To Celebrate July 4th Safely During The Coronavirus Pandemic

"We have jugglers who are going to be there, stilt walkers, bubble carts that are going to have bubbles going throughout the whole area, and then we have two big surprises that I'm not allowed to reveal just yet," Weibel says.

Social distancing recommendations mean that float builders are instead repurposing previous years' entries. For example, in a maintenance barn near the parking lot, city employees use a forklift to lower a wooden pergola onto a flatbed trailer lined with a carpet of artificial grass. They'll add red, white and blue bunting, streamers, flags and banners.

A few blocks away, Andy and Sarita Zilch and their daughters Maya and Nora typically gather with neighbors to watch the parade.

"I like getting candy from the parade floats," Maya says shyly.

Unfortunately for Maya, the reverse parade bans interaction, meaning no candy will be tossed into the crowd. Instead of placing chairs along the route, people will line up their cars and drive through the Independence Day reverse parade at 3 miles per hour.

"I heard about one mom that's going to bring candy with her and just throw it into the back seat every so often. Do you want me to do that?," Sarita Zilch asks her daughters, laughing lightly when Nora responds "No," with a head shake.

Even if her girls aren't convinced about the reverse parade, Zilch is excited and looking forward to seeing familiar faces.

"One benefit is we don't have to get there early and camp out and find a location that's in the shade, this will be nice and air conditioned and good," she says. " Honestly, [it's] just something different to do. A way to still celebrate the July Fourth holiday similar to how we used to even though it's not exactly the same thing."

In a previous version of this digital story, we misspelled Ali Weibel's last name as Weibul.