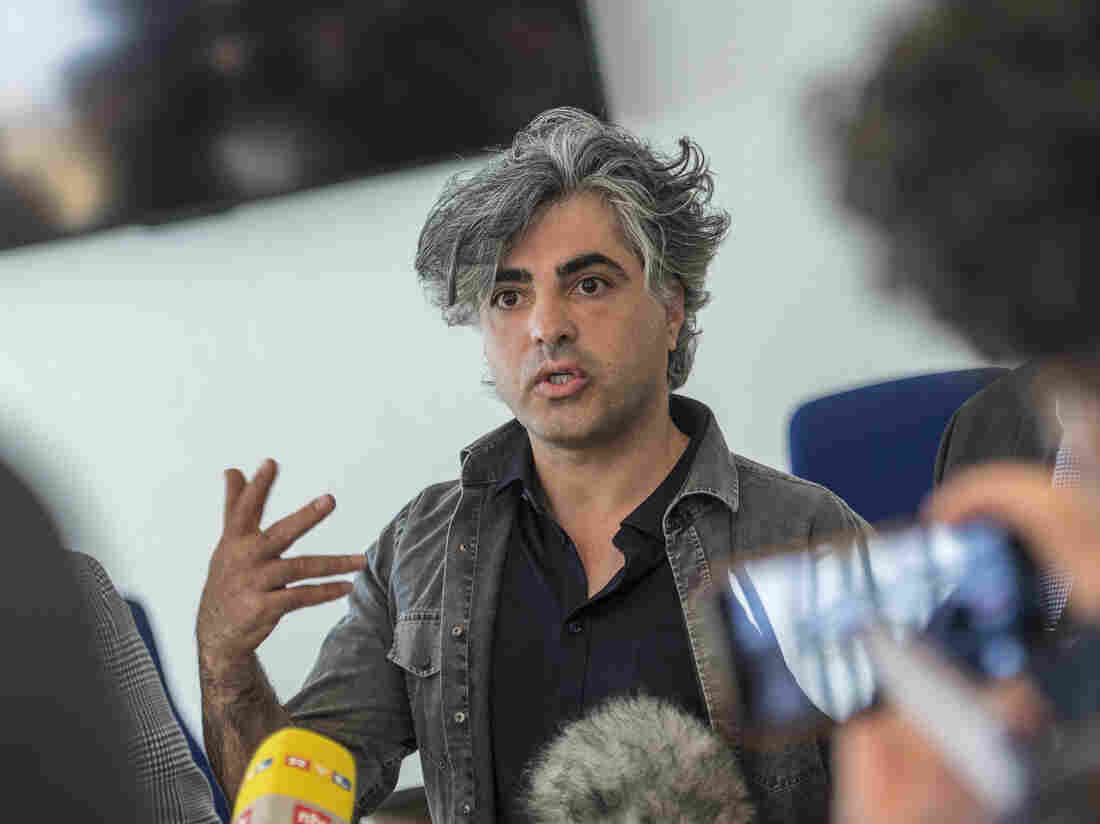 Syrian Oscar-nominated filmmaker Feras Fayyad answers journalists' questions outside a courtroom during a break in a trial against two Syrian defendants accused of state-sponsored torture in Syria, on April 23, in Koblenz, Germany. Thomas Lohnes/AFP via Getty Images hide caption 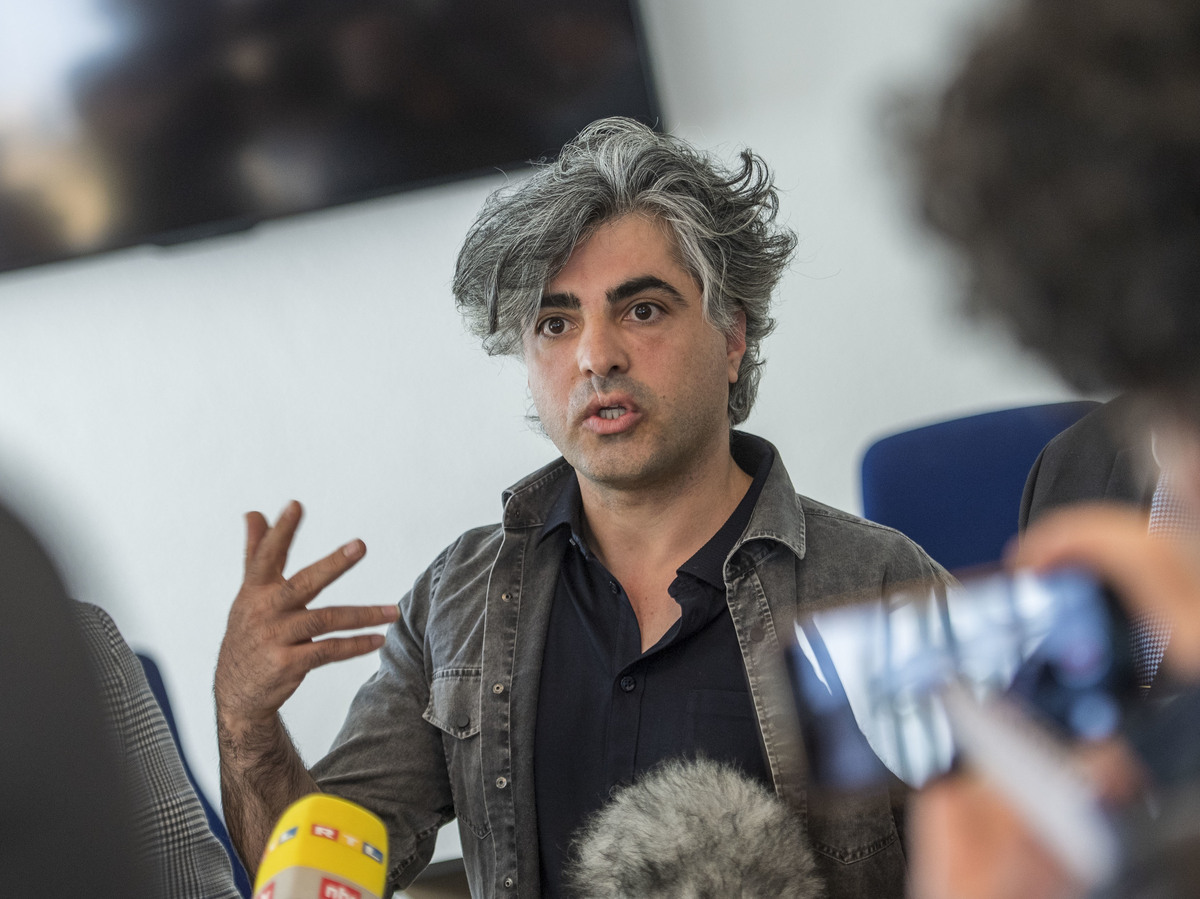 Syrian Oscar-nominated filmmaker Feras Fayyad answers journalists' questions outside a courtroom during a break in a trial against two Syrian defendants accused of state-sponsored torture in Syria, on April 23, in Koblenz, Germany.

Editor's note: This story contains a graphic description of an alleged sexual assault.

It was a chilling description of torture in an infamous Syrian prison: "There were screams, they weren't normal," Syrian witness Feras Fayyad said in court. "I was very afraid."

Fayyad, 35, an Oscar-nominated filmmaker, was the first witness to testify in a trial in Germany against a Syrian intelligence officer whom he alleges nearly killed him in a Damascus detention center in 2011.

The former high-ranking Syrian official, 57-year-old Anwar Raslan, is charged with crimes against humanity for his role as interrogations chief in the al-Khatib prison in Damascus. The trial could take up to two years.

Fayyad had never spoken publicly about his ordeal; he didn't even tell his family. His first public account was in the courtroom in Koblenz, Germany on June 5. The man accused of ordering his torture sat a few feet away.

Raslan had defected from the regime in 2013 and joined the rebels fighting the regime. He came to Germany with the wave of Syrian refugees fleeing the war and applied for asylum. But his 18 years as an intelligence officer caught up with him. He was arrested in Germany in 2019 and charged with crimes against humanity, including 58 counts of murder and at least 4,000 cases of torture.

Fayyad's testimony is crucial to establish one charge of particularly shocking brutality.

"My case was about sexual violence, it was difficult," he says in an NPR interview about his testimony that lasted for a full day in court.

The German judges asked him to recount the sexual assault, a rape with a wooden baton. He needed surgery for the physical injuries when he was eventually released. 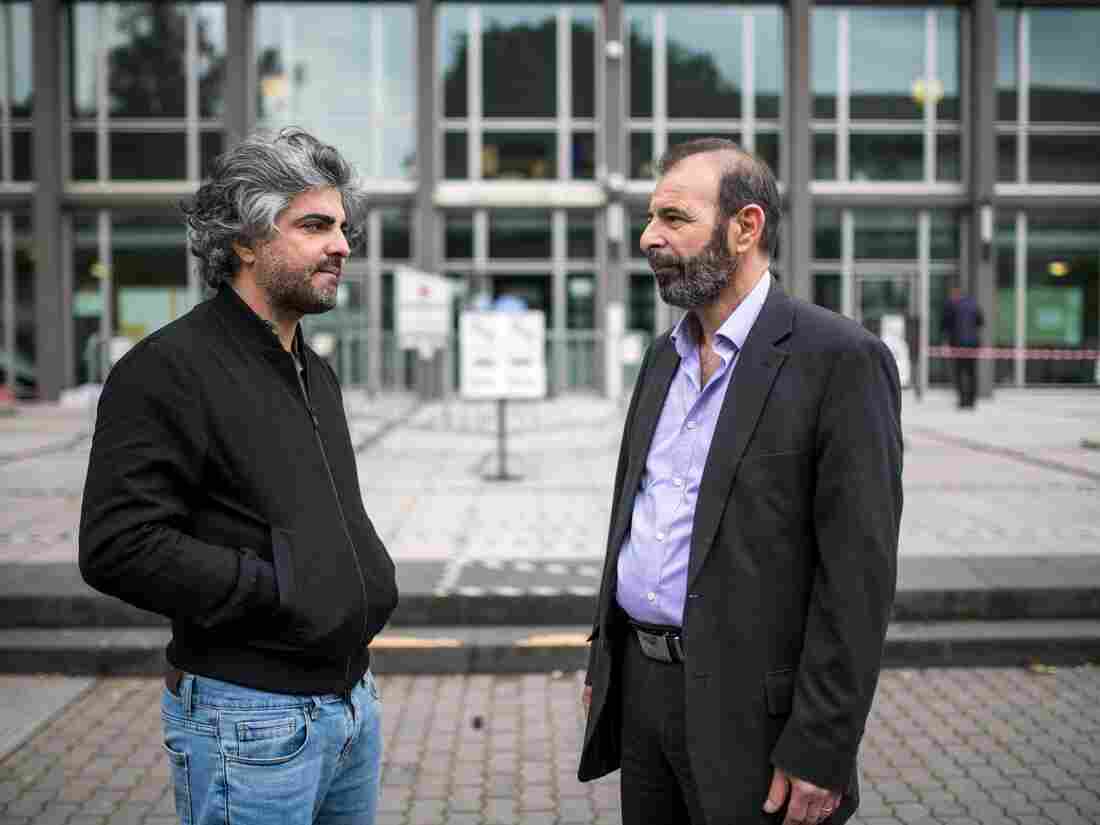 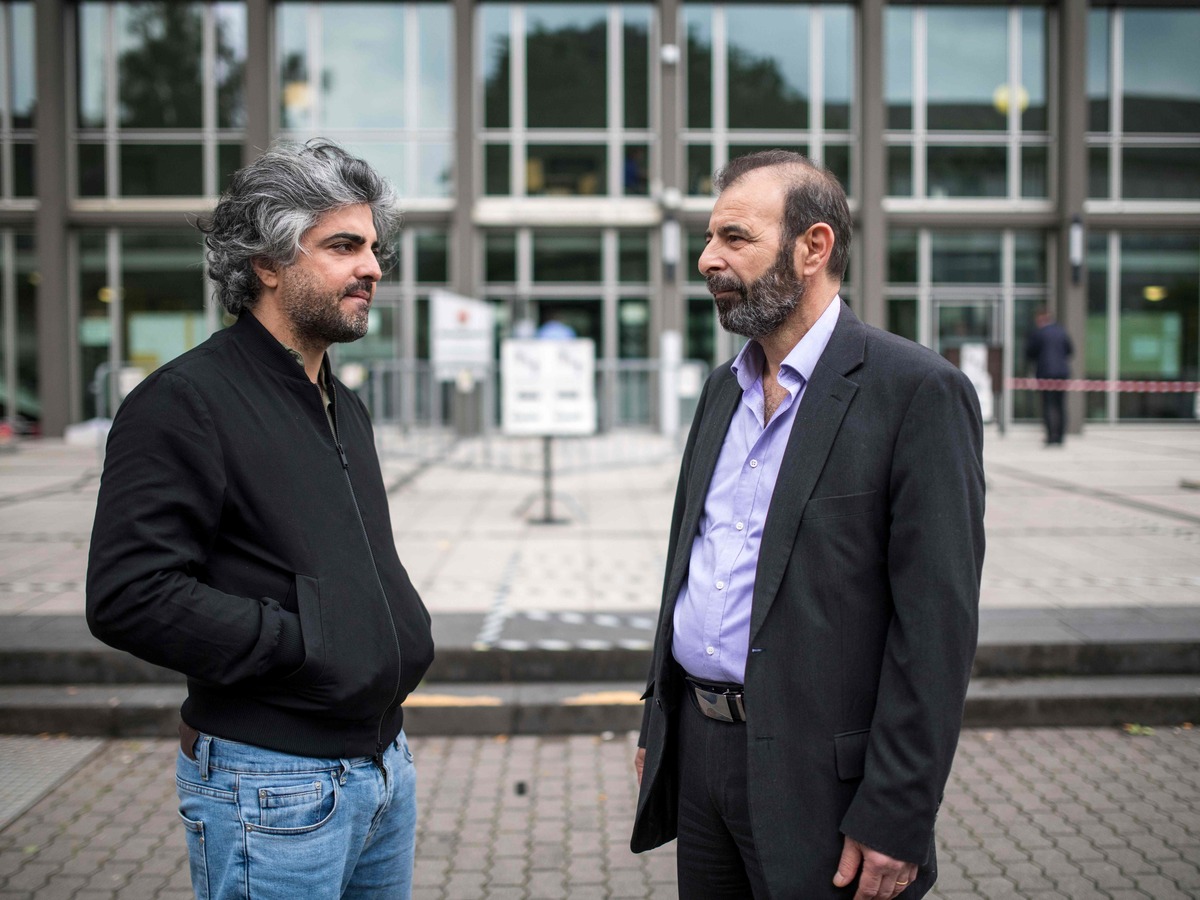 "I was holding this pain for a long time, but I have to start to speak out," he tells NPR from Berlin. He says he his silence was largely because of the stigma of rape in Syrian society.

Most Syrian survivors of sexual violence don't ever speak about it and remain in denial for years, according to a 2018 United Nations report documenting systematic use of sexual violence in Syria detention as a "tool to instill fear, humiliate and punish."

"We need to know who is committing these crimes, it's a big message," he says. "I came with my name. There is no way to stay silent. The regime has raped our country for a long time." He wants more victims to speak out.

In 2011, when protests began against the Assad government, Fayyad grabbed his camera and went to the streets. He documented the early peaceful demonstrations, the arrests, the ruthless, violent government response, shooting protesters in an attempt to quell the rebellion. He taught others to document the revolt until he was arrested in a policy of sweeping arrests. Thousands were swept up and detained in Syria's prison system.

Accused of spying and anti-regime activities, Fayyad was convinced he would die in prison. Even fellow inmates said he would not make it out alive.

"Oh, you are the director making a film against Assad, so then, they will kill you. You will be hanged," he recalls prisoners telling him. He was hung by his wrists for hours, beaten, lashed and starved; kept in a filthy communal cell where it was hard to tell who was still alive.

He remembers interrogations, while he was blindfolded, on his knees, by the man he identified in court as Anwar Raslan.

Remarkably, after 2 1/2 months in detention, Fayyad was released without explanation. His prison number was called, he was handcuffed to other prisoners and herded into a bus. His family urged him to leave the country, convinced he would not survive another arrest. He fled Syria soon after.

"Skinny, with no hair, my body was bleeding. I get scared to look in the mirror for a long time," recalls Fayyad, now largely gray-haired.

He chalks it up to fate that he survived, when thousands of Syrians swept up in arbitrary arrests died within days or weeks.

"Why me? The karma helped me to get out because I have a mission to do in this life," he says.

His mission, he says, was to continue his documentary work. He fled to Turkey, then snuck back across the Syrian border to the besieged city of Aleppo to film Syrian civilians under bombardment. But even then, his torture continued to haunt him, he says, causing physical pain and reoccurring nightmares.

In 2018, Last Men in Aleppo, his documentary about a city under siege, was nominated for an Academy award. In February of this year, he was in Los Angeles again. The Cave, his portrait of a courageous female doctor operating an underground field hospital, was also nominated for an Oscar.

But even as his work was honored, he says, he was not able to celebrate.

"My team asked me, 'Why you are not happy? You have to feel happy' " he remembers. "But I didn't know how to express my happiness. I was so angry. Inside me, there was so much I couldn't share because of the stigma and the shame."

The phantom pain returned again in the days following his testimony in the German court. "I feel like my body is broken, I start to lose even a way to put words together," Fayyad says.

He sees the war crime trial as the first step in his own recovery.

"When I went to the court, I start to feel that something completely changed after that. Of course, there is physical pain, but I start to think that justice is a real thing. It's not a fake."

Fayyad stunned the court when he told the judges he could forgive the defendant, Raslan. "If he admits these things happened, then I have to forgive him. I feel that forgiveness is the only way I can live in peace," Fayyad says in the interview.

But that forgiveness is on hold. In a 40-page statement read on May 18 by his lawyer, Raslan denied he had tortured or beaten any prisoners and repeatedly denied any responsibility, particularly in the case of alleged rape. "I distance myself from such acts if they have been committed," the statement said.

Fayyad is now working on a new documentary, about his detention and torture and about the historic war crimes trial in the Koblenz courtroom. He and his team are working during a pandemic, but, he says, he faced more risk in Syria.

"I'm trying to make it like a message for my family because I didn't tell them before and I want to tell them," he says.

He also plans to tell his family why he decided to testify: for justice, for history, and to send a message for those still imprisoned in Syria, that they are not forgotten.