Accessibility links
FACT CHECK: Trump's Tweets On N.J. Election Fraud Case Officials have charged four people in connection with a local race in Paterson in May. While Trump says the case shows that mail-in ballots are vulnerable to fraud, experts say it was easily detected. 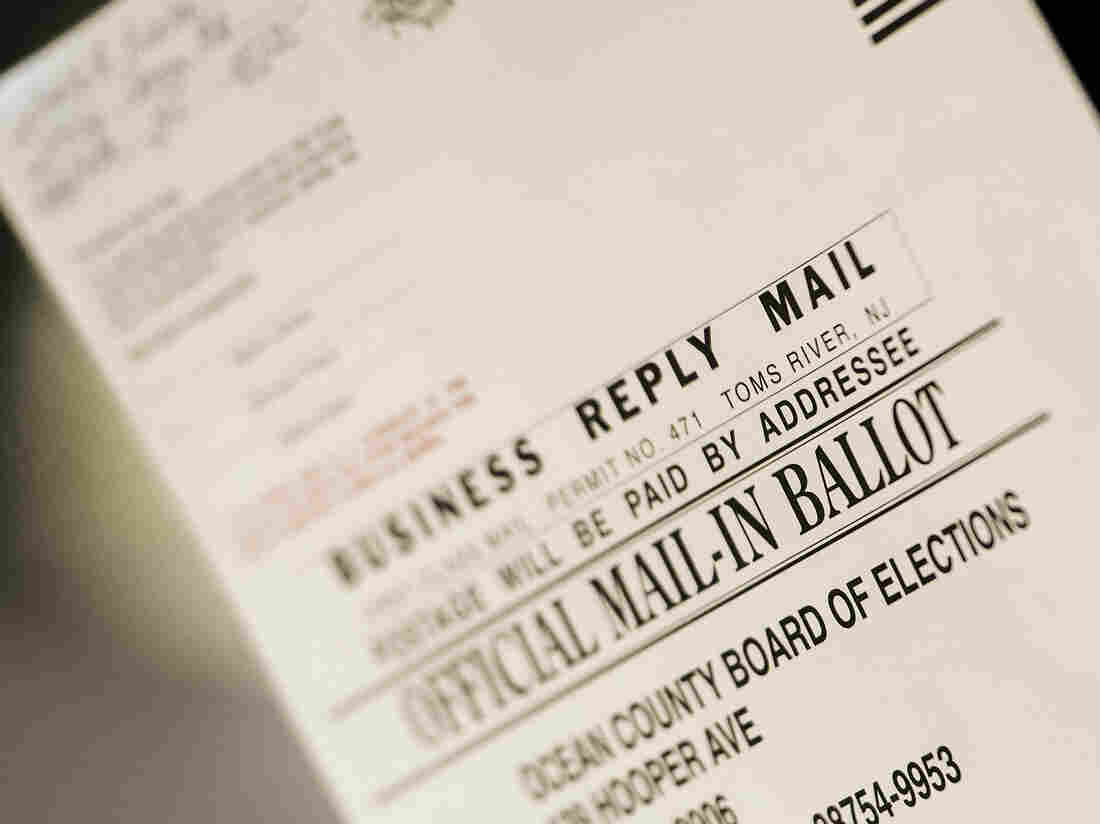 Mail-in voting has been relatively rare in New Jersey but Gov. Phil Murphy ordered the May 2020 elections to be entirely by mail due to the pandemic, a first for the state. Paul J. Richards/AFP via Getty Images hide caption 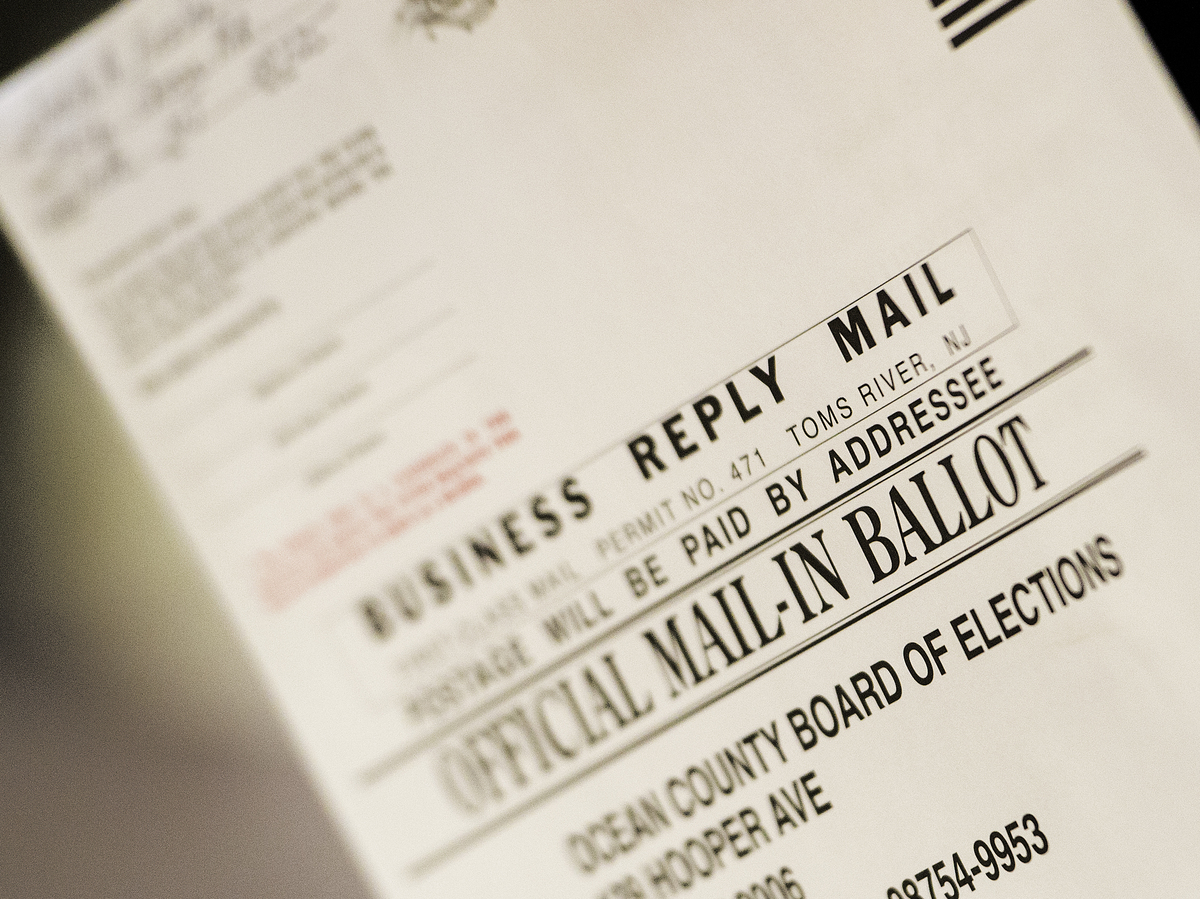 Mail-in voting has been relatively rare in New Jersey but Gov. Phil Murphy ordered the May 2020 elections to be entirely by mail due to the pandemic, a first for the state.

When President Trump tweeted Sunday night about alleged fraud in a May special election in New Jersey, he tried to wrap it into his ongoing effort to claim voting by mail is less secure than in-person voting.

"Absentee Ballots are fine. A person has to go through a process to get and use them. Mail-In Voting, on the other hand, will lead to the most corrupt Election is USA history. Bad things happen with Mail-Ins," he tweeted. "Just look at Special Election in Patterson, N.J. 19% of Ballots a FRAUD!"

Absentee Ballots are fine. A person has to go through a process to get and use them. Mail-In Voting, on the other hand, will lead to the most corrupt Election is USA history. Bad things happen with Mail-Ins. Just look at Special Election in Patterson, N.J. 19% of Ballots a FRAUD!

But election law experts say that Trump's spotlight on the case also shows both how rare these kinds of cases are and the safeguards in place to protect the integrity of ballots.

"I had been predicting that the Paterson scandal was going to get to the president's attention, because he's been making so many unsupported claims about voter fraud that when there is an actual case involving election crime and absentee ballots, it's not surprising that he's making some hay out of it," said Rick Hasen, an election law professor at the University of California Irvine School of Law.

Rumors of fraud in Paterson, N.J., had been piling up since the city held a special election for several city council seats on May 12. It was one of several local elections held that day that Gov. Phil Murphy ordered be conducted exclusively by mail-in voting because of the COVID-19 pandemic.

The investigation started after the U.S. Postal Inspection Service tipped off state law enforcement officials to hundreds of mail-in ballots stuffed in a Paterson mailbox. Other bundled ballots were discovered in another nearby city.

This November, Election Night Could Stretch Into Election Week Or Month

In New Jersey, voters are expected to mail or submit their mail-in ballots themselves unless they certify a "bearer" to do it on their behalf. A bearer can collect and deliver ballots for no more than three voters in an election, and a candidate in the election cannot serve as a bearer.

"We will not allow a small number of criminals to undermine the public's confidence in our democratic process," said Attorney General Grewal.

The Passaic County Board of Elections rejected 3,190 ballots, about 19% of the mail-in ballots submitted, for the May 12 election in Paterson, but it is unclear how many were connected to the fraud allegations.

In fact, there are many more common reasons for a ballot to be thrown out, such as a signature that doesn't match election records or if the ballot was received after the deadline.

It was also the first election in New Jersey conducted entirely vote-by-mail, and officials have warned of hiccups in matching signatures, processing paper ballots and receiving the mail on time.

Although critics including Trump have claimed that a surge in mail-in voting will leave the election system prone to fraud, voting rights advocates in New Jersey say some of the same security features that exist for in-person voting also feature in vote-by-mail.

"There is a huge myth about voter fraud in this country," said Jesse Burns, executive director of the League of Women Voters of New Jersey.

When voters cast a ballot in person in New Jersey, they are required to sign a poll book to match their signature to election records. The same is true of mail-in ballots, and election officials check the ballot to make sure the signatures match.

During the state's primary on July 7, election officials will notify voters if their ballot was rejected because of a signature mismatch. Burns said it was not only a way for voters to ensure their vote is counted, but it also functions as a warning that another person may have attempted to vote fraudulently in their name.

UC Irvine's Hasen said the security measures used in New Jersey were likely enough to raise the suspicion of authorities. "Even on this small scale, what you see is that having a conspiracy like this to try to affect the outcome of an election is very difficult to do without detection."

Burns suggested the rare instances of election fraud are not typically committed by individual voters themselves but rather organized groups.

"This is not a voter fraud issue," she said. "It's crimes being committed against voters."

Hasen emphasized that the Paterson case shows how difficult carrying out the kind of widespread fraud Trump insists is possible.

"Imagine trying to swing the outcome of a presidential election, how many people you would have to get involved or how many ballots you would have to try to intercept without detection in order to try to have a meaningful impact on races that are typically decided by tens of thousands of votes if not more in a particular state," said Hasen.