Accessibility links
In Iraq, Rising Virus Cases And Oxygen Shortages Stoke Outrage, Fears Of 'Chaos' Crowds have seized supplies for ill relatives, and officials warn the health system could collapse. "This is a war against the coronavirus and we have lost the war," says an Iraqi official. 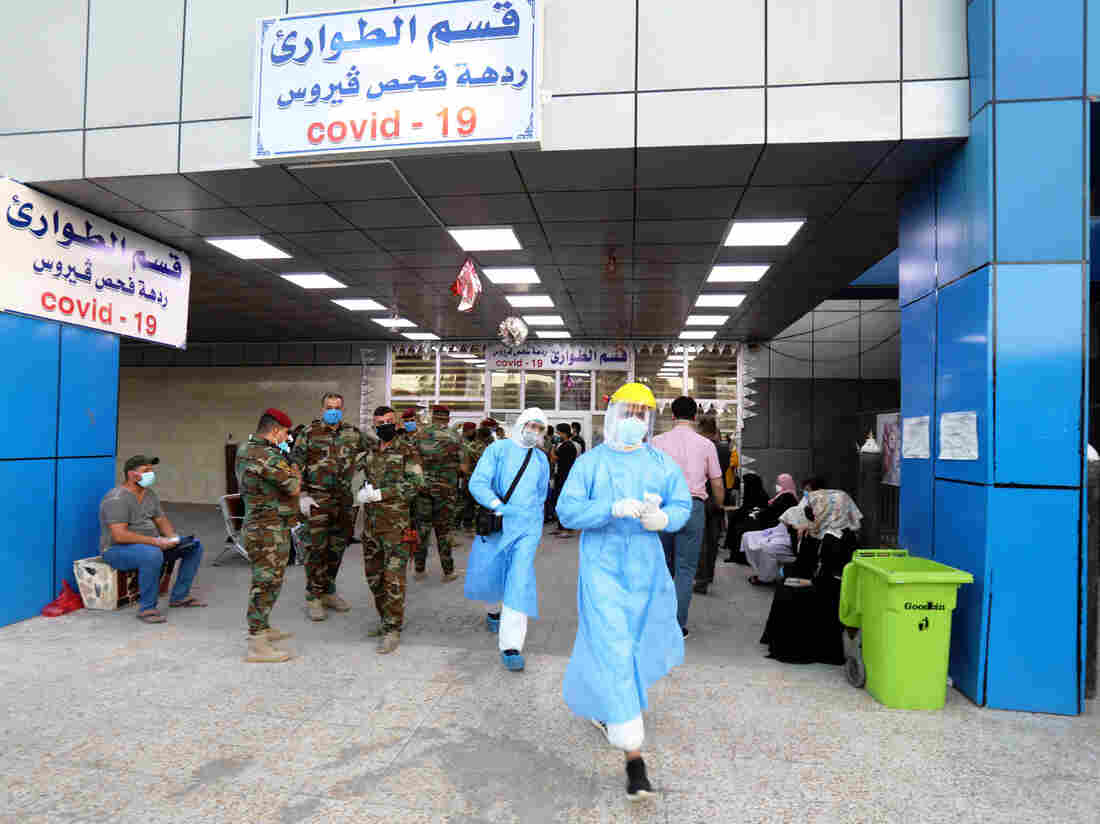 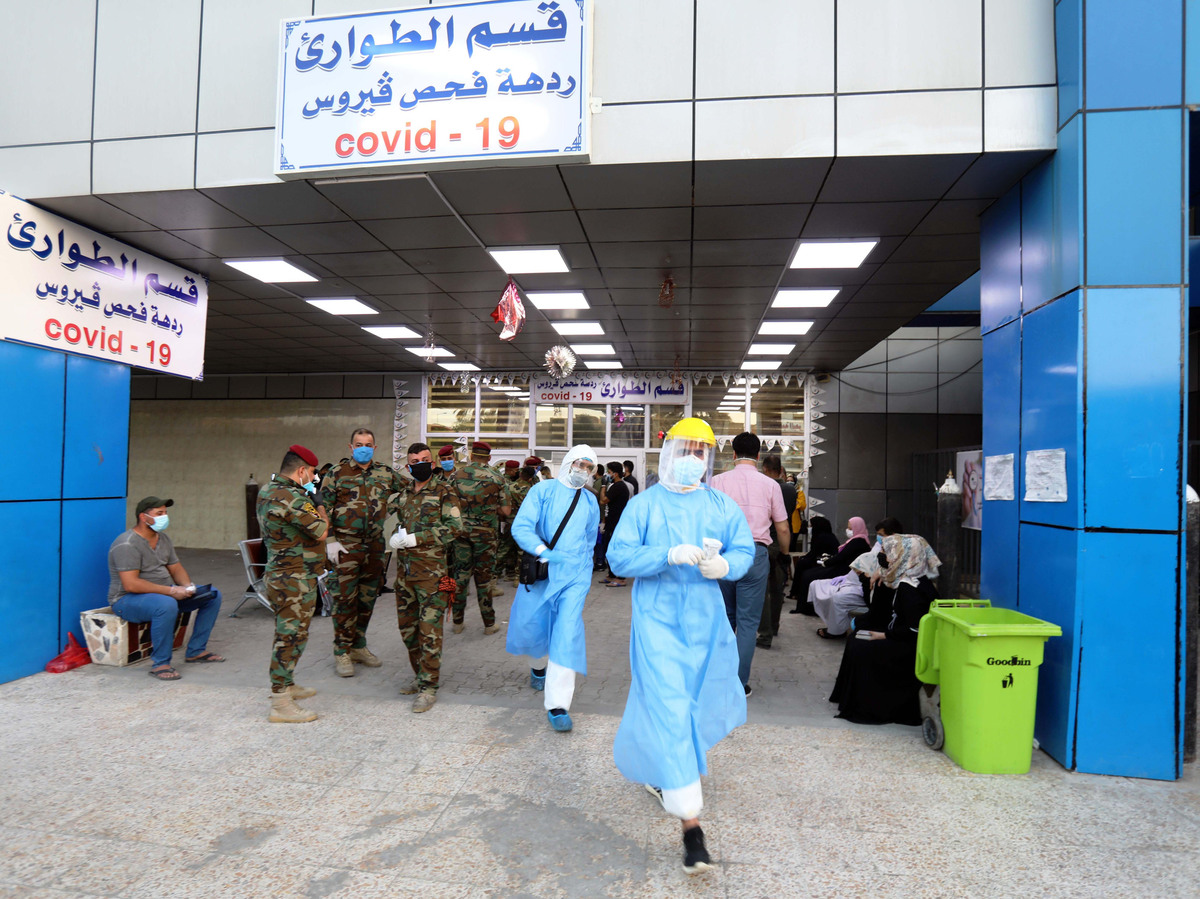 People wait for COVID-19 tests at a hospital in Baghdad on June 4.

Coronavirus cases are spiking sharply in Iraq amid a shortage of supplies that has resulted in protesters storming an oxygen cylinder factory and relatives of patients seizing oxygen canisters in hospitals.

"This is a war against the coronavirus and we have lost the war," says an Iraqi official who has been briefed on the government's response to the pandemic.

The official, who asked not to be identified because he was not authorized to speak publicly, tells NPR the true number of cases is believed to be many times higher than reported figures of more than 1,900 deaths and more than 49,100 infections.

He appealed for more international help, and says hospitals in the southern city of Nasiriyah and the port city of Basra are no longer able to treat new patients. Protests in both cities over corruption and lack of government services helped bring down the previous Iraqi government last year.

Saif al-Badr, the spokesman for Iraq's Ministry of Health, told journalists on Sunday that large groups of patients' relatives pushed their way into the main Al-Hussein Teaching Hospital in Nasiriyah last week. They seized oxygen canisters for their family members after realizing the hospital was running out. Health ministry officials say a doctor and other medical staff were assaulted in the scuffle.

"The families started taking oxygen canisters," says Badr. "Of course this will lead to severe shortages and chaos. It's supposed to be distributed by the hospital staff."

Protesters in the southern province of Dhi Qar stormed a government factory that supplies oxygen canisters, after reports that it had closed so the product could be imported from Iran instead. Prime Minister Mustafa al-Kadhimi, who took office just two months ago, ordered an investigation into whether corruption was behind the closure.

In a video posted online by Basra's Radio Al-Mirbad, a hospital administrator flanked by medical staff in hazmat suits and face shields appealed to the provincial governor to urgently provide oxygen and other supplies and more staff.

"We can't watch our loved ones die because of mercenaries and those who trade in the lives of the poor," said Naji Sadiq, head of the intensive care unit, referring to allegations of corruption that have led to supply shortages.

On Wednesday, Iraq reported 1,958 new cases of people testing positive for the coronavirus and 104 deaths. The weekly tally of cases jumped by almost 40% last week over the previous week.

A spokesman for Iraq's health ministry declined to respond to an NPR request for comment on its response to the pandemic.

Authorities in central Iraq and the country's Kurdistan region in the north have imposed partial curfews – mostly restrictions on movement in the evenings and a ban on large gatherings — to stem the spread of the virus.

The head of the Iraqi medical association says he is recommending a much stricter three-week nationwide curfew because of the increase in infections and lack of medical supplies.

"Otherwise we must accept the huge loss of life as well as the possibility of the collapse in the health system and subsequent chaos," says Dr. Abdul-Amir al-Shimmary in a statement.

Iraq's health ministry is considered among the most corrupt ministries in a nation that routinely ranks among the world's top 10 most corrupt.

Shells of hospitals paid for but never finished dot the country and aging hospitals are littered with broken equipment and trash in the halls. There is so little nursing staff that patients are expected to bring a relative to care for them.

"Corruption is a No. 1 issue," says Dr. Aizen Marrogi, a former U.S. Army Surgeon General liaison in Iraq. "The first, second day after medicines arrive, they disappear. The government pays for a lot of employees that don't exist."

Marrogi says Iraq's health system lacks mid-level staff, particularly nurses, maintenance and proper hospital management. He says it is difficult to tell the real extent of the pandemic in Iraq because of a lack of reliable figures, including testing data.

"There seems to be a chronic lack of resources allocated to hospitals," says Farhad Alaaldin, chairman of the Iraq Advisory Council think tank. He believes Prime Minister Kadhimi needs to do more to respond to the pandemic and to allocate money for the response from funds Iraq plans to borrow internationally to offset a financial crisis.

Kadhimi — who came into office as the third candidate to try to form a government after former Prime Minister Adel Abdul-Mahdi was forced to resign by sweeping anti-government protests — has pledged to crack down on corruption, rein in Iran-backed militias operating outside the rule of law and pave the way for early elections.

The pandemic has coincided with a sharp drop in oil prices, which has left Iraq unable to pay civil service salaries. The government relies on oil for more than 90% of its revenue.