Accessibility links
Black 'Survivor' Contestants Say The Reality Was Harmful Stereotypes Alums of the unscripted CBS hit say the show routinely stereotypes Black contestants. They state its production is hampered by systemic racism that makes it tougher for Black participants to succeed. 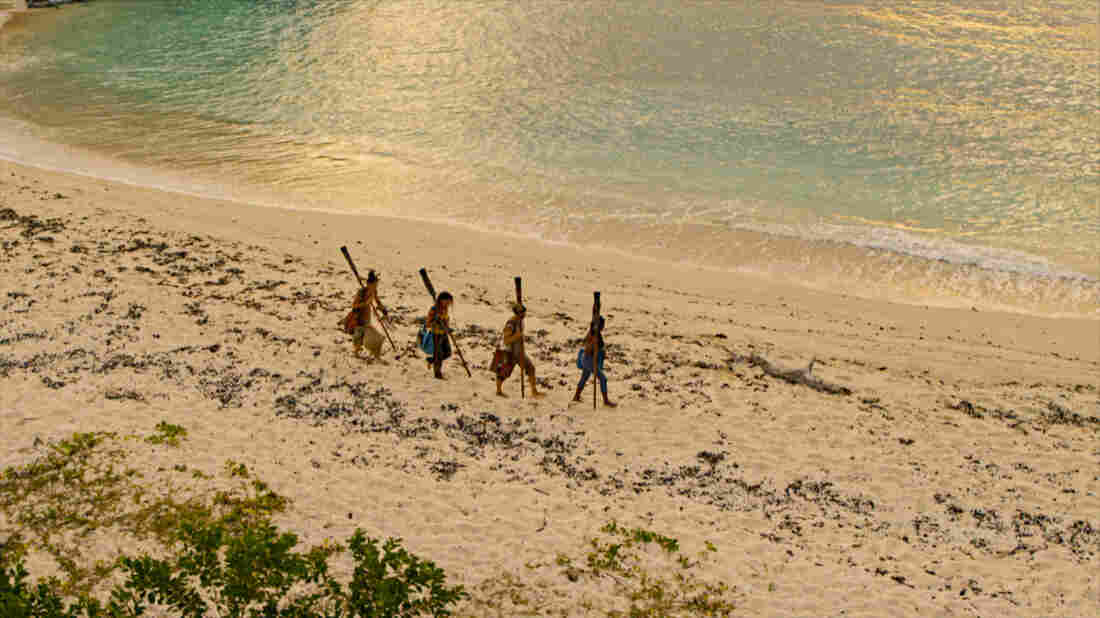 Black alums of the unscripted CBS hit say the show routinely stereotypes Black contestants. They say Survivor's production is hampered by systemic racism that makes it tougher for Black participants to succeed. Above, contestants on the latest season, Survivor: Winners at War. CBS Entertainment hide caption 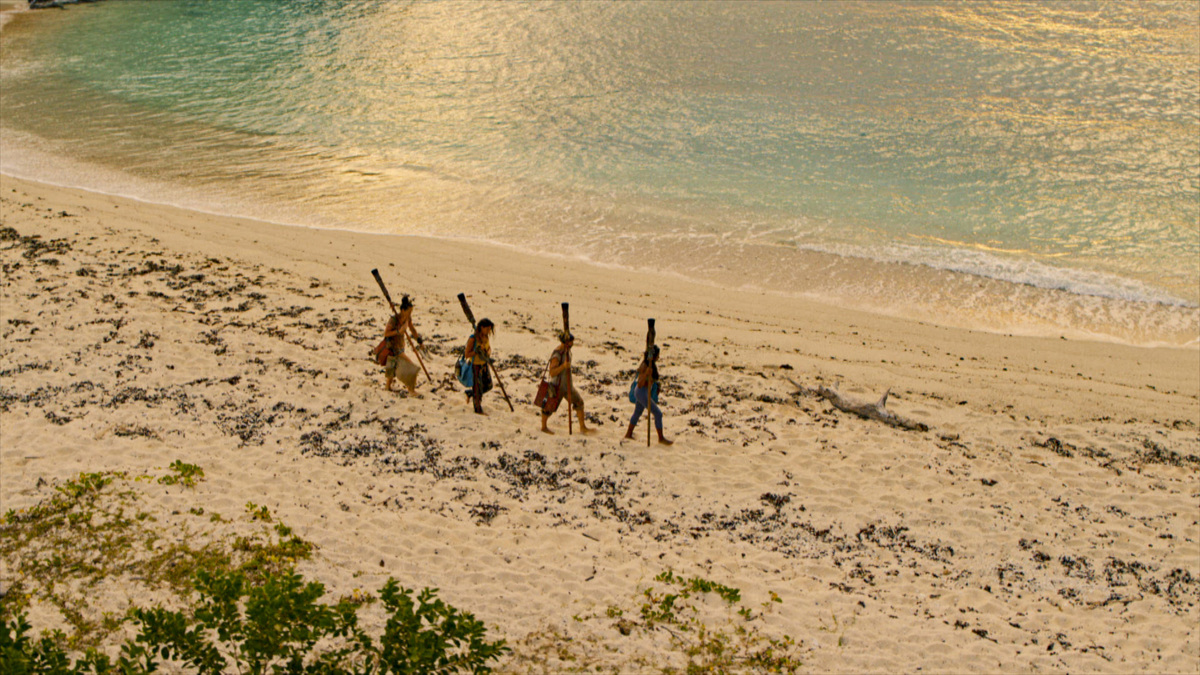 Black alums of the unscripted CBS hit say the show routinely stereotypes Black contestants. They say Survivor's production is hampered by systemic racism that makes it tougher for Black participants to succeed. Above, contestants on the latest season, Survivor: Winners at War.

Ramona Gray Amaro has a spot in reality TV history. She is the first Black woman to compete on CBS's unscripted hit series Survivor, which took 16 people and isolated them on an island in Malaysia, vying for a million-dollar prize, on the show's first season in 2000, Survivor: Borneo.

But when she saw how she was depicted in the show, which takes footage filmed on the island and edits it into episodes aired months later on network TV, Amaro also felt she was also one of the first Black people stereotyped by Survivor.

She says footage showing her lying around her team's campsite early in the competition made her look lazy, feeding into stereotypes about Black people. But she was suffering from dehydration.

We can't swim ... we butt heads, we're athletic, but maybe not smart and strategic. I'm just saying, 'Do right by us.'

Even though the program eventually showed her regaining her strength and working harder, she was voted off the island after 12 days. Amaro felt the damage was done.

"I became the lazy person, which is the furthest thing from the truth," says Amaro. "That really upset me and it took me a long time to get over it. ... To realize, we signed our life away. They can do whatever they want to do."

In watching the series since then — there have been 40 seasons over the past 20 years — Amaro believes she saw other Black contestants stereotyped in similar ways. "We can't swim ... we butt heads, we're athletic, but maybe not smart and strategic," she adds. "I'm just saying, 'Do right by us.' "

That's why Amaro has joined with several other Black people who have competed on the show to advocate for changes to Survivor.

Among their requests: Hire more people of color to work behind the scenes as casting executives, editors and producers to improve portrayals. Enforce a zero tolerance policy for racist acts. Avoid creating storylines for non-white contestants that play to racial stereotypes. And issue a public statement acknowledging systemic racism in the franchise, with a concrete plan for addressing it.

There are a few different groups of Black Survivor alumni trying different strategies to make their opinions known. One group sent a letter to CBS on June 19 — the Juneteenth holiday — to request a meeting. Another Black alum, J'Tia Hart, created a petition on MoveOn.org asking for a range of changes to help diversify the program, including insuring at least 30 percent of the show's cast is Black, Indigenous or People of Color (BIPOC). So far, over 4,500 people have signed it.

I have a degree in nuclear engineering from a top engineering school. I'm a mother. I work in national security. I am very well-rounded. And I just got boiled down to a simple trope of a lazy, unintelligent person.

"What they don't do a great job with, is telling positive stories and connecting with the multifacets of being African American," says Hart, an alum from the 2014 season Survivor: Cagayan. "I have a degree in nuclear engineering from a top engineering school. I'm a mother. I work in national security. I am very well-rounded. And I just got boiled down to a simple trope of a lazy, unintelligent person."

Last week, former Survivor contestant Rob Cesternino, who is white, hosted a discussion with 12 Black alumni from the show led by Sean Rector, a Black man who competed on Survivor: Marquesas in 2002.

Chief among their concerns: feeling that the show mostly marginalizes the Black people who play on it, because the production staff that creates the show isn't diverse enough.

Hart says the show's Black alumni, many of whom have connected with each other on a private Facebook group, were galvanized by the discussions about race and civil rights following the death of George Floyd at the hands of Minneapolis police. Some of the systemic racism Black people face in America, she says, comes from negative stereotypes on TV. So they decided to speak up about their concerns over how Black contestants are depicted on the show.

"It's not just Black Lives Matter when it comes to the police," says Brice Johnston, who competed on Survivor: Cagayan alongside Hart and felt he was stereotyped as a sassy, flamboyant Black gay man. "It's Black Lives Matter [for us] as reality contestants ... our lives, our stories, we matter as well."

Survivor is CBS's longest-running reality TV show, involving several production companies, including MGM Television. CBS declined to respond on the record to the criticisms, but said it will meet with the alumni. "CBS condemns racism in all its forms and we are committed to inclusive and safe production environments," the network said in a statement. "In the spirit of partnership with former contestants, we have responded to the request from the Black Survivor Alliance to meet with representatives from the show and CBS, and we're working together to set a time for this discussion."

About 30 percent of the show's cast in the last 10 seasons have already been BIPOC, according to CBS. U.S. Census estimates say the percentage of America's population that is white alone — Hispanics can be white, too — is 60 percent.

The show has had just four Black winners over 40 seasons — at 10 percent, that's a little less than the percentage of America's Black population, which is 13 percent. Most seasons have two or three Black contestants; one had none.

Cole said competing in a season where Black people weren't heavily outnumbered by white people helped Black players feel less isolated. It also removed an extra level of difficulty Black contestants face on less diverse seasons, where they must navigate how a larger group of white players reacts to their race, in addition to the typical challenges of the game.

And while Cole doesn't have many gripes about how he was depicted — he says the show has to make whoever wins look good to keep viewers engaged — he felt CBS didn't offer him many opportunities afterward. His season also featured two Black people as runners-up, but Cole felt the show failed to capitalize on the historic nature of his win, especially in reaching out to black-centered media.

"They could have really uplifted me a certain way ... it maybe would have gotten [the show] more of a Black audience," he adds. "They didn't have a system in place to handle the different directions you might go with a person of color. I became my own publicist. ... I got myself into Ebony magazine."

Survivor has faced criticism about how it handles race for years. The Cook Islands season initially segregated contestants by race, prompting USA Today to call it, "a publicity stunt of the rankest and most obvious kind." And Julia Carter, a Black woman who competed on the show's 38th season, Edge of Extinction, published a blog post in 2019 alleging that there were two instances when other contestants used the n-word around her — quoting a film and a TV show — that Carter says was never shown on air.

It's a criticism CBS has faced regarding another one of its unscripted competitions, Big Brother: that racism committed by white contestants is rarely shown, leaving viewers unaware of why people of color on the show might be reacting badly.

"Socially, I wanted to shut down," Carter wrote on her blog. "Speak up and put a target on my back or bite my tongue in order to maneuver my way through the game without much attention? ... In that moment, I chose the game."

Survivor was criticized last year for moving too slowly to address a series of sexual harassment allegations against a male contestant.

As a result, the show announced changes to its production process, stating, "sexual harassment and impermissible biases cannot be brought into the competition."

Carter, Cole and the show's other Black alumni want racism to get the same kind of specific attention and treatment. They believe their suggestions will help Survivor create an environment that doesn't echo the racism they face in the real world.

The only questions left now, are whether CBS and MGM Television agree, and are willing to change.