Accessibility links
5 Takeaways From China's Hong Kong National Security Law Those charged under the new law could be tried on the mainland. Legal experts say the measure ends any remaining autonomy the region enjoys under Chinese rule. 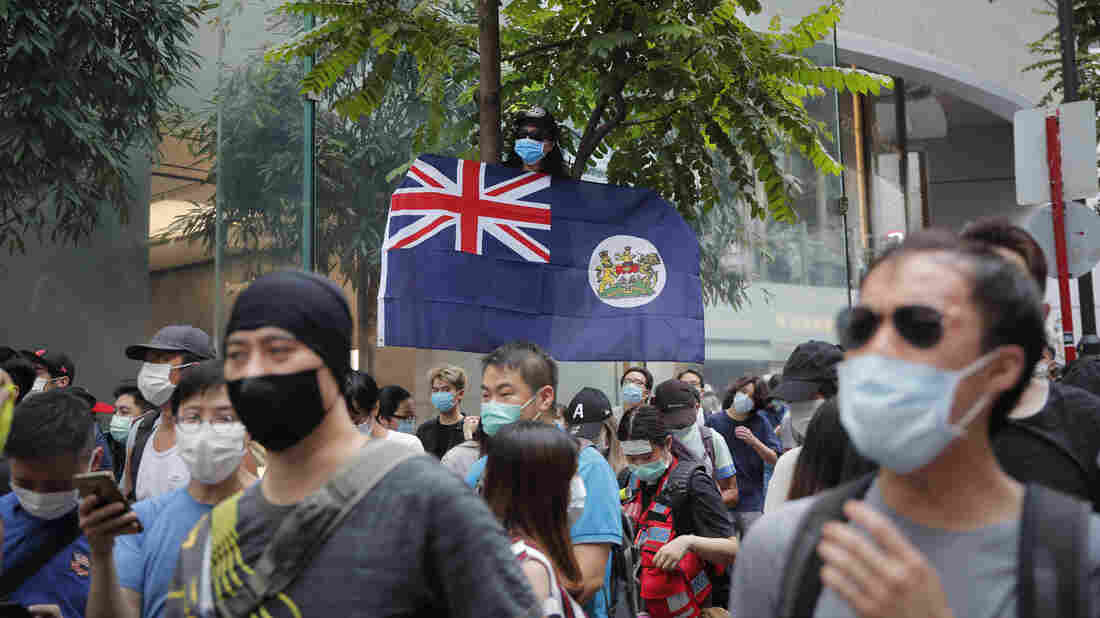 A man displays the Hong Kong colonial flag Wednesday, the anniversary of the city's handover to China from Britain in 1997. The gesture could be prosecuted under Beijing's new national security law, which it imposed on Hong Kong. Kin Cheung/AP hide caption 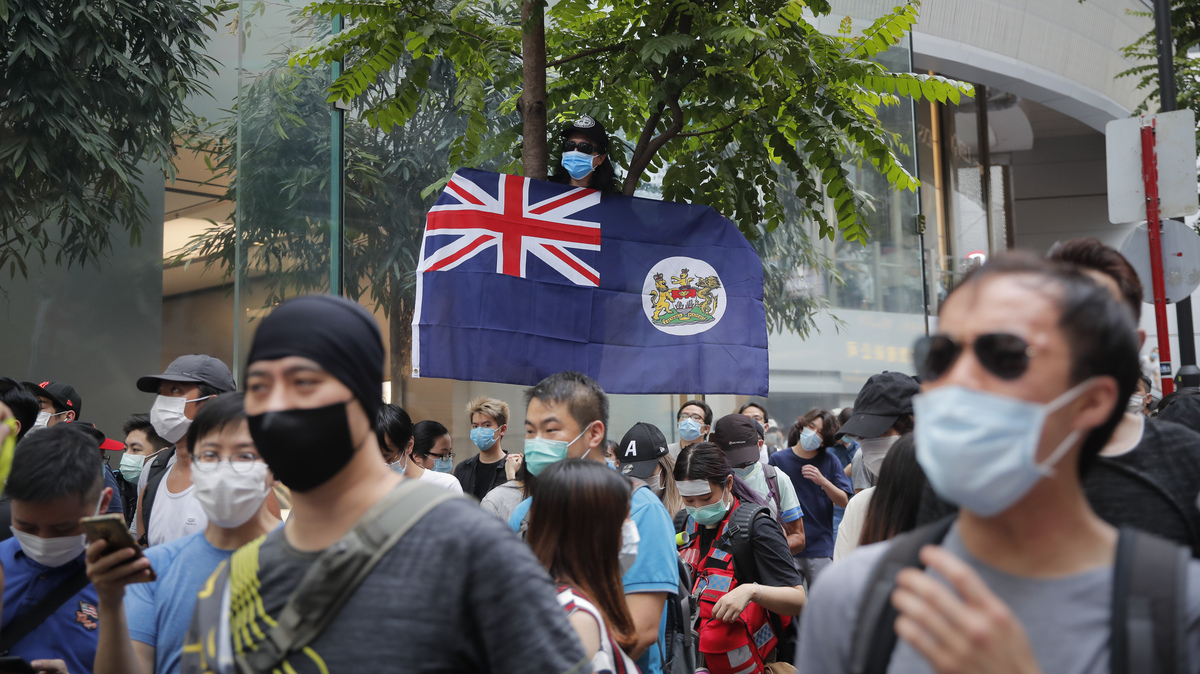 A man displays the Hong Kong colonial flag Wednesday, the anniversary of the city's handover to China from Britain in 1997. The gesture could be prosecuted under Beijing's new national security law, which it imposed on Hong Kong.

Only after it was passed did Beijing unveil the full text of its controversial new national security law imposed by fiat on Hong Kong.

On Tuesday an elite body within China's legislature voted unanimously to adopt the law in a rushed, secretive process. Even Hong Kong's chief executive, Carrie Lam, said she hadn't been allowed to see a draft before the law's passage.

Broadly, the law criminalizes four types of activity — secession, subversion of state power, terrorism and collusion with foreign entities — carrying a penalty of up to life in prison.

Beijing says the law is crucial to safeguarding Hong Kong's economic development and political stability. Legal experts and Hong Kong civil society leaders say the measure ends once and for all any remaining autonomy the region enjoys under Chinese rule.

Here are five takeaways about what the law means for Hong Kong:

The law empowers China to set up a "National Security Committee" to oversee the investigation and prosecution of any violations. This committee is subject neither to judicial review nor Hong Kong law — meaning it operates without any local checks or balances.

"With this law being superior to all local law and the Basic Law (Hong Kong's constitution) itself, there is no avenue to challenge the vague definitions of the four crimes in the law as violating basic rights," says Michael C. Davis, a fellow at the Wilson Center. "Now people take their rights subject to the interest of the state."

Beijing will appoint an adviser to sit on the committee to "guide" national security work. "A more cynical person might suggest that the 'adviser' will in reality be the most powerful person in the committee," says Alvin Y.H Cheung, a law fellow at New York University.

"The full impact of the law will only be clear with implementation," says Margaret Lewis, a law professor at Seton Hall Law School and a specialist on Hong Kong and Taiwan. "What we do know is that Beijing now has an efficient, official tool for silencing critics who step foot in Hong Kong."

The law applies to anyone, anywhere in the world

The law is expansively extraterritorial in its scope. According to Article 38, it can apply even to offenses committed "outside the region by a person who is not a permanent resident of the region."

That means an American penning an editorial for a U.S. newspaper that argues for, say, sanctions against China, could technically fall afoul of the law for "inciting hatred" against Beijing.

"It is asserting extraterritorial jurisdiction over every person on the planet," wrote Donald Clarke, a law professor at George Washington University, noting that the national security law is even more broad in scope than China's own criminal law.

In "complex" and "serious" cases or those in which a security threat is imminent, China will be able to assert complete legal jurisdiction.

That means China can extradite suspects to mainland China to face trial — an extreme version of the extradition bill that was shelved after setting off mass peaceful protests last year in Hong Kong. Defendants in such cases will be subject to Chinese criminal law, sweeping aside Hong Kong's judicial system. China can also waive trial by jury and deny public access to the trial if the case is deemed to contain sensitive information.

"The [national security] law is a total destruction of Hong Kong's legal and judicial system," said Victoria Hui, a political science professor at the University of Notre Dame.

China says Chinese and Hong Kong legal systems are incompatible, so China's must be seen as the default legal authority.

Serious perpetrators of subversion, terrorism, collusion with foreign forces and secession face life in prison under the new law.

Yet such crimes are "all vaguely defined and thus potentially capacious in practice," says Jacques deLisle, a law professor and expert on Hong Kong's legal system at the University of Pennsylvania.

The law also appears to be written to address specifically a raft of proposed legislation Hong Kong's government was forced to suspend in recent decades due to popular opposition.

The law also mandates anyone entering public office in Hong Kong to take an oath swearing allegiance to Beijing — an apparent response to a 2016 debacle in which Beijing barred two Hong Kong legislators from assuming office after they refused to recite the oath as written.

"There is a lot of poking sticks and picking at scabs of past Hong Kong controversies that Beijing lost," deLisle says.

Already, a chill is spreading through Hong Kong

Within hours of the law being passed, two opposition political parties in Hong Kong announced they were voluntarily disbanding. Other activists have resigned from organizations that may now be considered subversive.

I hereby declare resigning from @HKHIIAD and will continue the journey of fighting for Hong Kong in personal capacity.

I shall bear all the consequences of lobbying for attention to Hong Kong & sanctions on China over the year by myself.

We shall never surrender. pic.twitter.com/JWWoq74Wxn

"In part because of how vaguely many parts of the law are described, there will be further hits to civil society. The impact on universities will be dramatic," says Jeff Wasserstrom, a historian and the author of the recent book Vigil about Hong Kong.

Hong Kong residents have been deleting their social media accounts en masse as they rush to remove speech that could be considered subversive or secessionist. Sales of virtual private network software, used to jump over Chinese-style Internet controls and evade some digital surveillance, have skyrocketed in Hong Kong.

On Wednesday, the first full day after the law took effect, thousands of Hong Kong residents took to the streets to protest the law and Hong Kong's handover to Chinese rule. For the first time in 23 years, organizers were denied permission to congregate in commemoration of the 1997 handover.

Police say they made their first handful of arrests under the national security law, including one man who unfurled a flag advocating for Hong Kong's independence from China.