Accessibility links
Trump Clashes With Congress On Military's Removal Of Confederacy Symbols An effort to remove Confederate names from military bases has broad bipartisan support in both chambers of Congress. President Trump is vowing to veto the defense bill if the provision stays in. 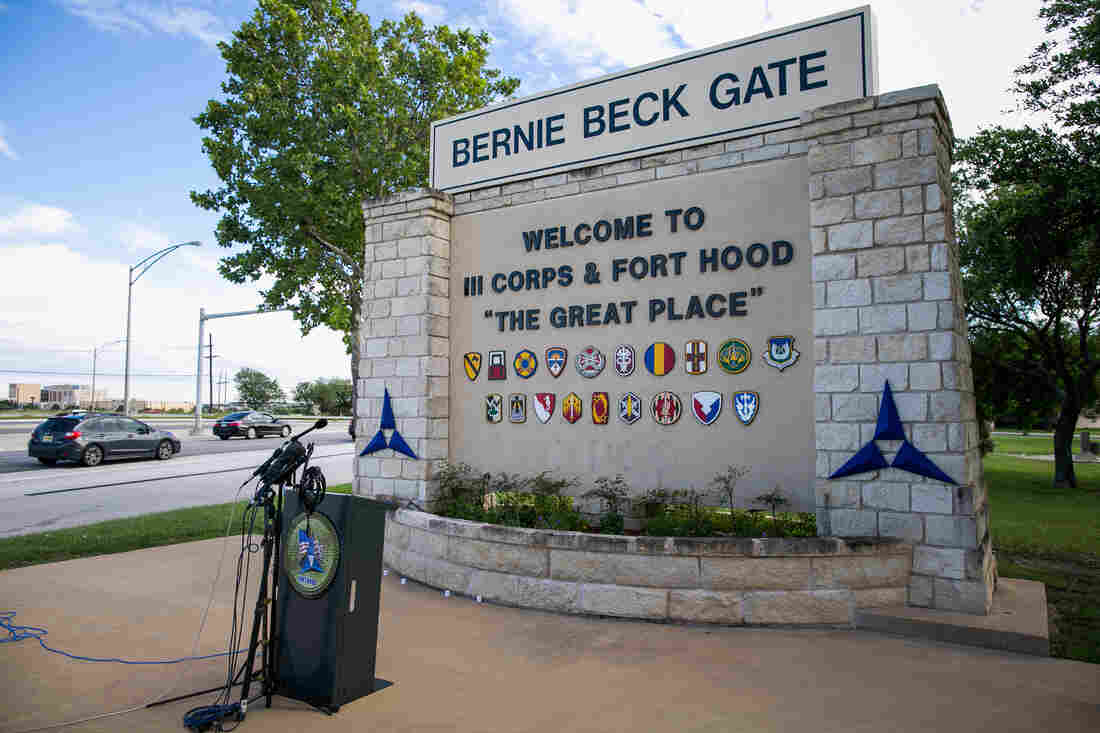 The Bernie Beck Gate at Fort Hood, Texas. An effort to remove Confederate names from military bases has broad bipartisan support in both chambers of Congress, but President Trump is vowing to veto the defense bill if the provision stays in. Drew Anthony Smith/Getty Images hide caption 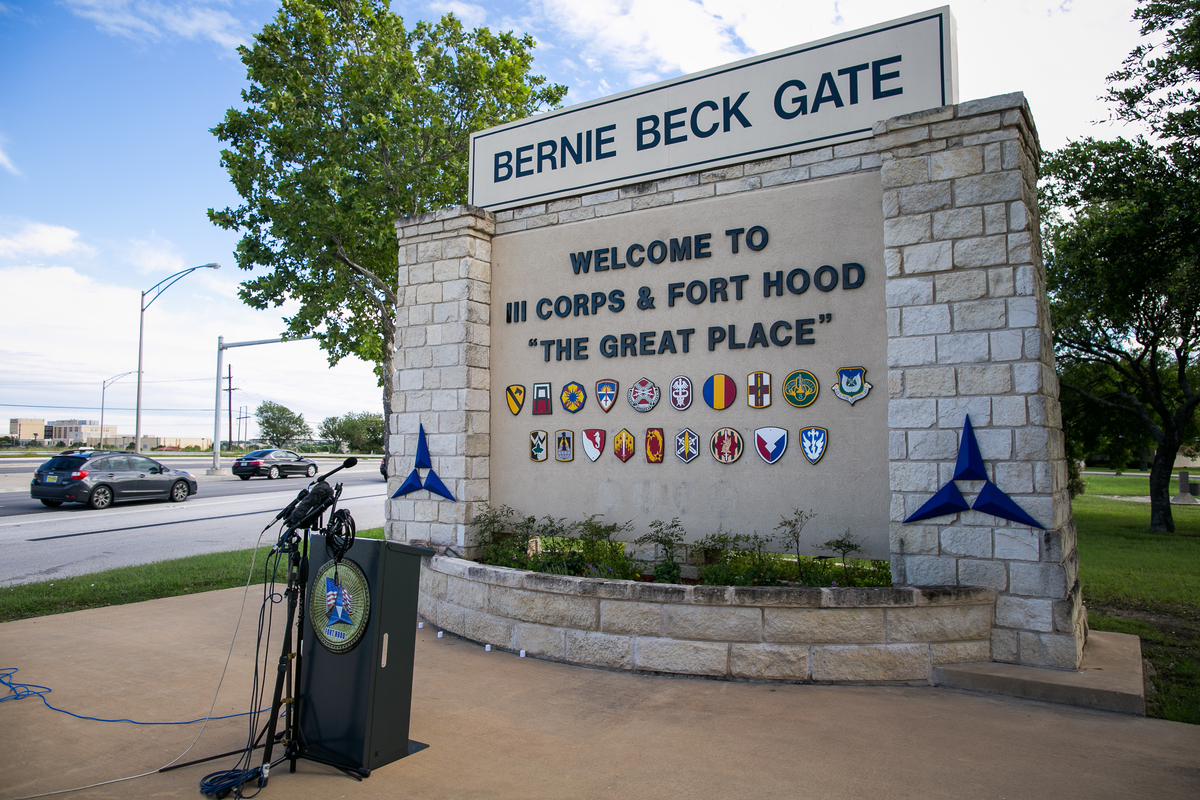 The Bernie Beck Gate at Fort Hood, Texas. An effort to remove Confederate names from military bases has broad bipartisan support in both chambers of Congress, but President Trump is vowing to veto the defense bill if the provision stays in.

President Trump is escalating his fight with Congress over a broad bipartisan effort to rename military installations named for figures from the Confederacy, threatening to veto an annual defense bill if it includes the provision.

The Senate is debating the National Defense Authorization Act, which already includes the provision backed by most members of the Senate panel. Meanwhile, a bipartisan group of House lawmakers is looking to add the change as part of ongoing negotiations for its version of the defense legislation.

Senate Minority Leader Chuck Schumer, D-N.Y., called Trump's threat "typical bluster" and assured colleagues the defense bill will still pass with the directive intact. Trump made the threat just hours after Schumer dared him to take such a step as a result of the issue over Confederacy names.

I will Veto the Defense Authorization Bill if the Elizabeth “Pocahontas” Warren (of all people!) Amendment, which will lead to the renaming (plus other bad things!) of Fort Bragg, Fort Robert E. Lee, and many other Military Bases from which we won Two World Wars, is in the Bill!

Trump zeroed in on the sponsor of the Senate amendment, Sen. Elizabeth Warren, D-Mass., with a racial slur. The Senate Armed Services Committee adopted Warren's provision last month, but there were some dissenting members on the panel who were opposed.

The amendment would create a commission charged with issuing recommendations for renaming Army installations that bear Confederate names. The Pentagon would have three years to install the changes, including the removal of other Confederate names and symbols from ships, aircraft, streets and other Defense Department property.

"The Confederate soldiers who betrayed the United States to fight for the Confederacy were fighting for the institution of slavery. Plain. Simple. Ugly," Warren said on the Senate floor Monday. "It is time to put the names of those leaders who fought and killed U.S. soldiers in defense of a perverted version of America where they belong, as footnotes in our history books, not plastered on our nation's most significant military installations."

Schumer remained confident as the fight moved to Twitter. "Let me make a prediction: First, that provision will not change in this bill as it moves through the House and Senate. Second, let me predict, President Trump will not veto a bill that contains pay raises for our troops and crucial support for our military," Schumer said Wednesday.

The massive annual bill sets policy for the Pentagon and military service members — one that, because of its size and importance, passes overwhelmingly nearly every year. It includes everything from plans on boosting troop levels and equipment to pay increases.

Already, the White House dug in earlier on standing by the current names of a number of Army bases named for Confederate commanders, including Robert E. Lee, who commanded the Confederate army; Braxton Bragg, the namesake of the Army's massive North Carolina installation; and others. Trump's veto threat now escalates that fight.

Sen. John Cornyn, R-Texas, was holding out hope Wednesday, saying it's possible that the provision could be tweaked in a way to win Trump's approval.

"You know we've got a long way to go to get the NDAA bill done in the first place, and there's a conference committee," Cornyn told reporters. "So there's many places along the way where we can modify that and hopefully in a way the President will agree to."

But Rep. Karen Bass, D-Calif., chair of the Congressional Black Caucus, joined Schumer in dismissing Trump's tweet during a press conference on legislative proposals to further racial equality in the country.

"The president has said he is going to veto it, but we know that we never know what the president is going to do from one minute to the next," Bass told reporters. "I would find it hard-pressed that he would actually veto that bill because he wants traitors to continue being on the name of our military institutions."

The debate also highlights a growing gulf between the president and even members of his own party when it comes to revising American tributes to symbols of the Confederacy, highlighting a painful chapter of racial injustice in U.S. history.

Republicans, including Senate Majority Leader Mitch McConnell, R-Ky., and House Minority Leader Kevin McCarthy, R-Calif., had expressed support for the move to rename the 10 Army bases named for Confederate commanders. Many were named around World War I following a War Department decision that Northern installations could be named for Union leaders and that ones in the South for Confederates.

"I don't think the name of the facility should be something that's divisive or offensive to people, especially if there are better alternatives to it, but there has to be a process to it," Sen. Marco Rubio, R-Fla., told reporters. "I personally don't have any problem renaming bases. We have plenty of American military heroes we can rename these things after."

But some GOP members, including Sen. Jim Inhofe of Oklahoma, chairman of the Senate Armed Services Committee, said Warren's language to force the Pentagon to make the changes goes too far.

On Wednesday, Sen. Josh Hawley, R-Mo., said he's sponsoring an amendment to soften the Warren provision — allowing a commission only to make recommendations — that could allay Trump's concerns.

"I hope we'll get a vote on it. I think that would take care of the issues that the President seems to have," Hawley said.

The House is moving forward with a bipartisan provision as it works on its defense bill and takes it up on the floor later this summer.

"I always didn't think it was right," Bacon told NPR on Tuesday, ahead of Trump's veto threat. "Particularly, the bases were named during the Jim Crow South era, and it wasn't done to respect the African Americans of the South. It was to appease the Jim Crow governments of that era. So again I think to be respectful to our minority population in our country, I think it's the right thing to do."

The stand-alone version of the legislation has more than two dozen sponsors, including two Illinois Republicans, Reps. Adam Kinzinger and John Shimkus, who are also both military veterans.

Brown, a retired Army officer who has deployed and trained at several bases named for Confederacy figures, is a member of the Congressional Black Caucus and also sits on the House Armed Services Committee. He said he's heard from several Republicans who have told him they want to see the measure pass.

"There's much greater awareness today of symbols and monuments and names," Brown said. "I think you'll have [a] higher percentage of men and women in uniform today who can tell you who Gen. Bragg was and why it's inappropriate to have his name on one of the major force projection platforms of the United States Army, an institution that should be taking pride in inclusion and diversity and unity, and not on symbols that have divided us over the years."

Brown said he's looking throughout the services to remove Confederate symbolism or names from military and Department of Defense facilities.

For example, Brown noted the Navy has to reassess the name of one of its warships, the cruiser USS Chancellorsville, which is named for a Confederate victory. On Wednesday, the Armed Services Committee approved one of Brown's amendments to remove any Confederate flags from Defense Department properties.