Accessibility links
June Unemployment Report: Hiring Surged. U.S. Added 4.8 Million Jobs The unemployment rate fell to 11.1%. But there are indications that the job growth has slowed recently amid a surge of new coronavirus infections. 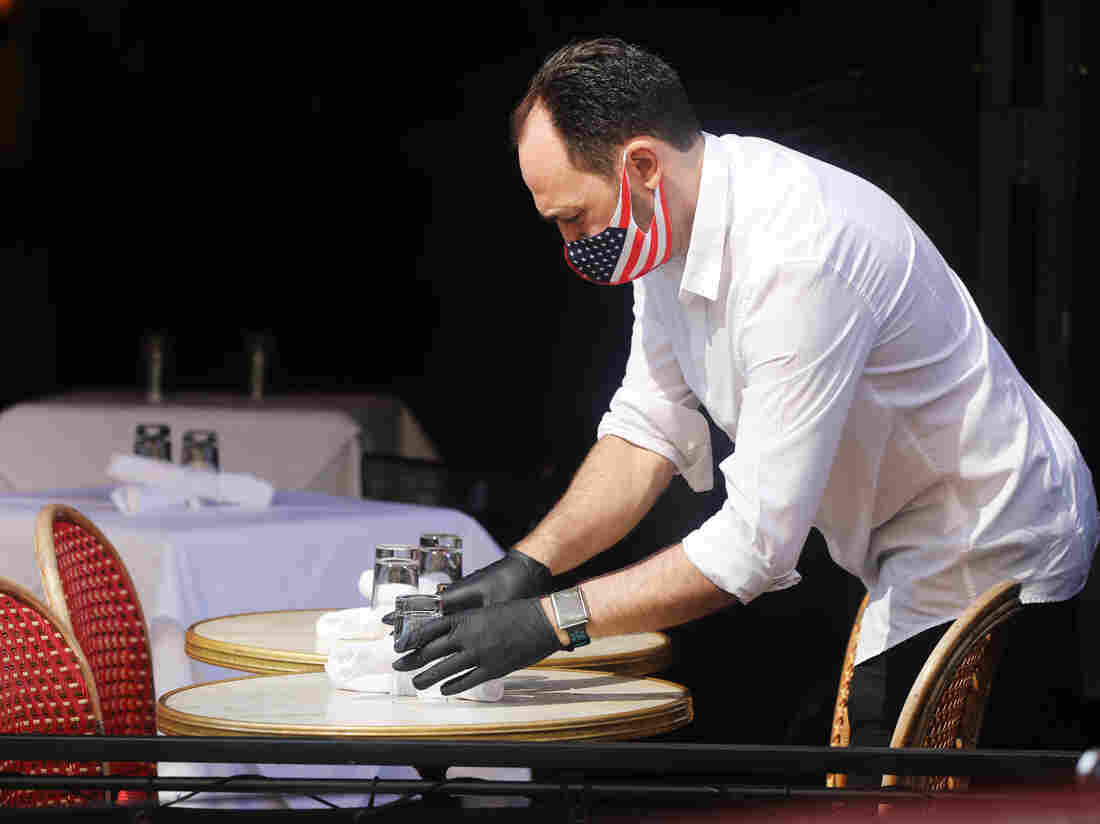 A restaurant server in New York prepares a table. But people remain cautious about going out and spending money.

Employers added a record 4.8 million jobs last month, as the U.S. economy continued to slowly bounce back from a deep and painful coronavirus recession. The unemployment rate dipped to 11.1%.

"Our economy is roaring back," President Trump told reporters in the White House briefing room. "It's coming back extremely strong."

What's odd this time is that the closely-watched monthly jobs report offers a snapshot of the economy that was already somewhat out of date as soon as it was issued.

The Labor Department report reflects conditions from the middle of June. The COVID-19 outbreak has since been accelerating in many states, which could put the brakes on the nascent economic recovery.

"This is not just luck, what's happening. This is a lot of talent," Trump said in response to the stock market gains.

About 40% of the job gains last month were in leisure and hospitality — a sector that was hard hit early in the pandemic.

In just the past week, governors in Florida and Texas have ordered bars to close for a second time in an effort to slow the spread of the virus. California has halted indoor restaurant dining and closed movie theaters for most of its residents. Arizona has also shut down water parks and gyms for 30 days.

Many states have paused their reopening plans.

And even in the absence of government orders, people tend to be more cautious about going out and spending money when there's an uptick in coronavirus infections.

"We're risking our health for peanuts," says Schenck. "You go from making $80 in tips in a couple of hours and now you're doing $15. How can anybody make a car payment?"

Unemployment declined for all workers. Latinos saw the biggest improvement. The jobless rate for African Americans fell only slightly, and at 15.4%, it is now the highest for any racial group.

The official unemployment rate has been artificially low for the last several months, because some people who are out of work have been misclassified as employed. The Labor Department says that problem persisted in June, but it's shrinking. Even if all workers had been properly classified, the unemployment rate would have declined in both May and June.

"We're going to be concerned till every single person is back to work," Mnuchin said.

"A full recovery is unlikely until people are confident that it is safe to reengage in a broad range of activities," Powell said in testimony before the House Financial Services Committee earlier this week.

Still, Powell was encouraged by the resurgence of economic activity when people returned to their jobs last month. Sixto Zermeno was one of them. The veteran hotel bellman went back to work in early June when casinos reopened in Las Vegas.

But Zermeno had been back on the job for only a few days when he got sick with the coronavirus. He has recovered but remains in quarantine.

"I'm a hard worker, so if you tell me to go to work, I'm going to go to work," Zermeno said. "But I feel nervous now because of how contagious this is. I never knew how easy this spreads."

The culinary union, which represents Zermeno and other Vegas workers, is suing several casino operators, saying they're not doing enough to protect their workers.

Tallies from companies that make scheduling software such as Kronos and HomeBase suggest workers' hours have declined in the most recent weeks in parts of the country where infections have spiked.

"The economic outlook isn't just evolving month by month or week by week. It is changing day by day and hour by hour," said Dave Gilbertson, vice president of strategy and operations at Kronos. "While payroll data lags by several weeks and longer, shift data is available is near real-time."