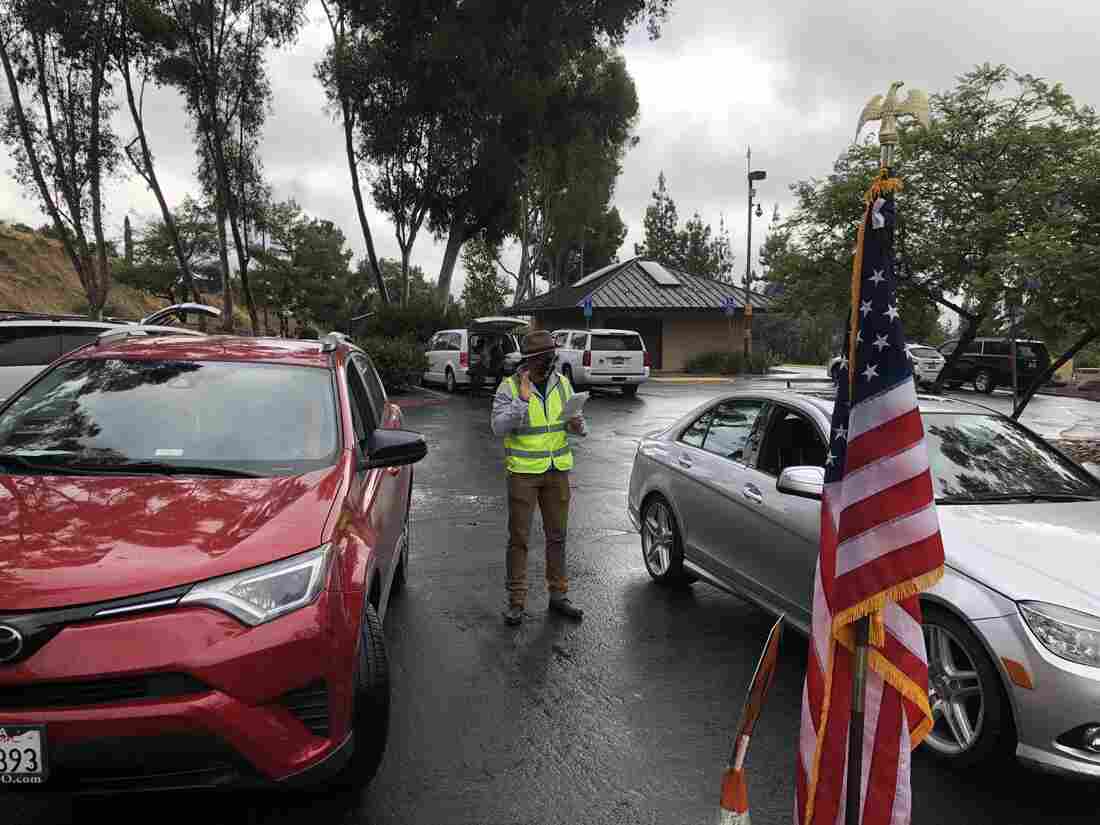 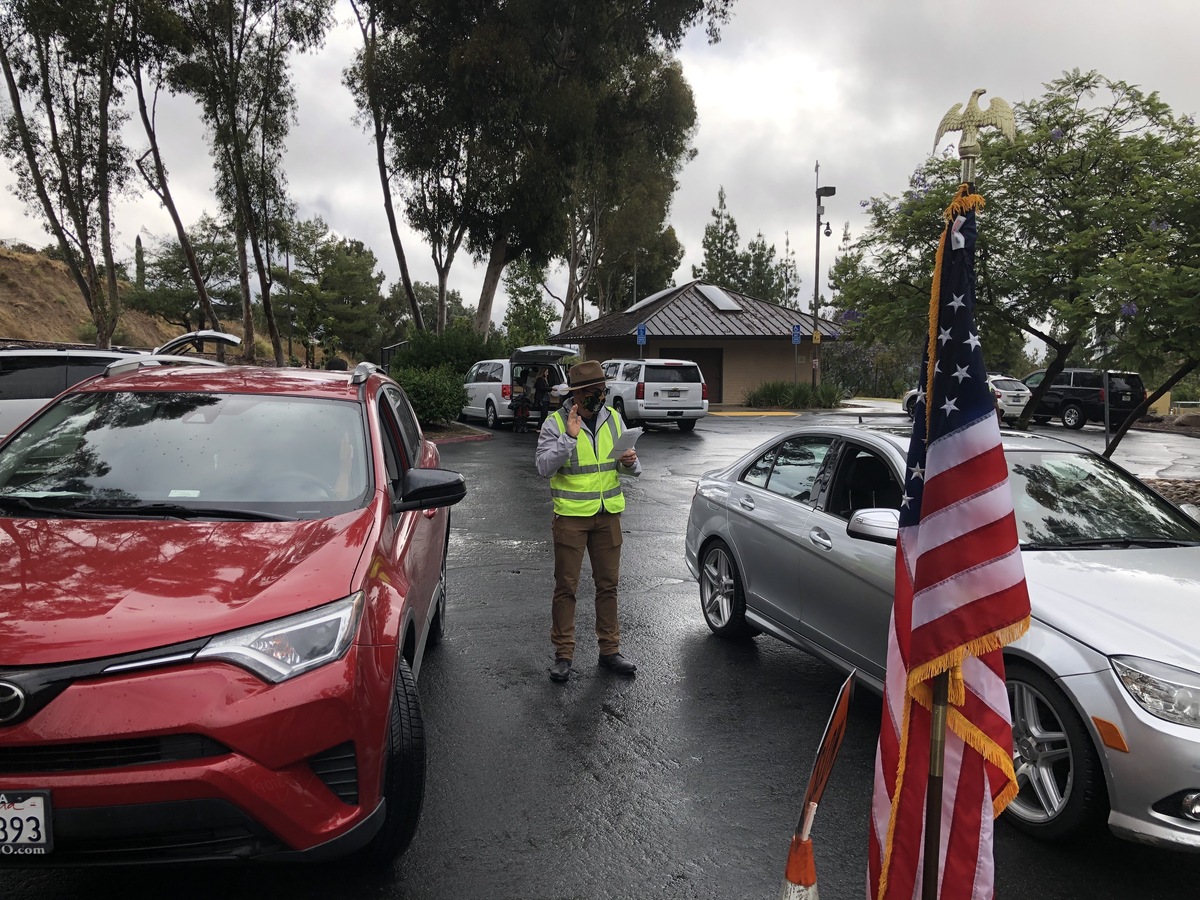 An immigration officer administers the oath of allegiance at a drive-through naturalization ceremony in El Cajon, Calif.

In El Cajon, Calif., a procession of cars carrying 600 soon-to-be U.S. citizens from 68 countries passed through a series of stations behind a local community center earlier this week, where they were asked a series of final questions: "Any coronavirus symptoms? Have you been arrested since your interview? No tickets, nothing like that?"

After that, they were asked to surrender their green card and given a small U.S. flag. Driving a little farther forward, an immigration officer wearing a face cover administered the oath of allegiance 6 feet from the car's window. And in a matter of minutes, years of uncertainty were over — hundreds of people became U.S. citizens over the course of the day.

When the coronavirus pandemic put a hold on naturalization ceremonies in March, it left a backlog of thousands of people who had qualified to become citizens but hadn't been able to officially swear an oath of allegiance — the final step in the often years-long process.

To try to clear the backlog as quickly and safely as possible, U.S. Citizenship and Immigration Services put together a series of naturalization drive-throughs, where prospective citizens could take the final step toward citizenship without leaving their cars.

Prior to the shutdown, the greater San Diego area held its monthly naturalization ceremonies at Golden Hall, a giant venue in downtown San Diego that fits thousands of people. During the coronavirus pandemic, it has been converted to a homeless shelter.

Rodriguez had been working toward naturalization for 20 years. She brought her sister and niece along with her for the drive-through ceremony. She was relieved to finally be able to take her final step toward citizenship before she had to renew her residency permit.

"I was thinking my card was going to expire," Rodriguez said. "I was going to have to do it again and maybe have a longer time than this, pay more money, more fees."

Immigration officers in El Cajon held drive-through ceremonies every weekday since early June to play catch-up for the three months that there were no ceremonies in Golden Hall.

"Golden Hall is a great ceremony, but this makes it a lot more personal almost," said Madeline Kristoff, the USCIS field officer for San Diego. "The officers get to participate in ways they normally don't get to in Golden Hall. And it's really fun to talk to people who are driving through and get to hear a little of their stories."

Instead of greeting an auditorium full of faces, immigration officers administering the oath are often doing so for just one or two people at a time.

"I wish we could get a cheeseburger or like a milkshake for you guys too," said one immigration officer, making conversation with driver Niru Reinier.

Reinier, from India, was naturalized 10 years ago. On Monday, she chauffeured her mother, who was becoming a citizen.

"I called my sister and I said, 'I feel like this is so SoCal.' Everything happens quickly," she said.

Many of the new citizens said what they were looking forward to most was voting in elections this November.

"We got our interview right before the shutdown, and I didn't know if I was going to be able to vote, which ultimately is an important part of why I want to become a citizen," said Raphael Declercq, who was born in France. He appreciated that the drive-through was able to make that happen. "I'm glad they're making those efforts."

Outside of a regular naturalization ceremony, voter registration tables greet people as they exit. At the drive-through, there were no booths to be found. But, along with their small U.S. flags, new citizens were given packets that included instructions on how to register to vote.

USCIS, currently facing a massive budget shortfall due to a reduction of visa applications, is looking to transition back to larger naturalization events later this summer.

"All right, congratulations to you, give her a big round of applause. You are now our newest United States citizens," said an immigration officer after administering the oath for the third consecutive hour.

The new citizen responded with a short honk of her car horn.