Accessibility links
Slain Singer Is Laid To Rest After Days Of Deadly Turmoil In Ethiopia Since Haacaaluu Hundeessaa was shot dead in Addis Ababa, the country has been riven by ethnic discontent. At least 80 people have died in clashes between protesters and security forces this week. 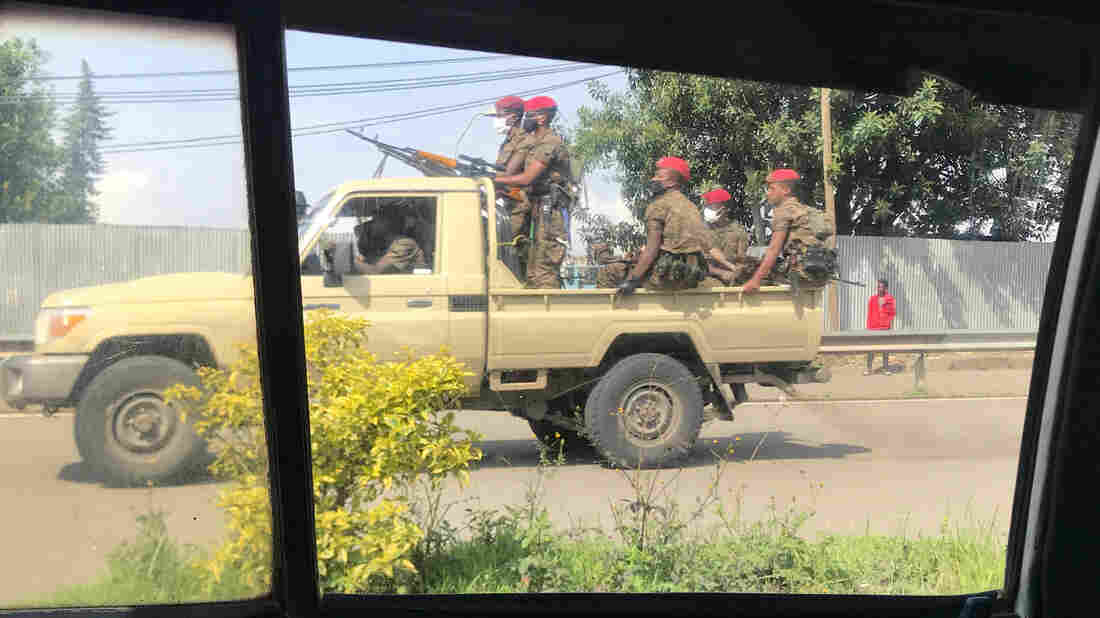 Members of the Ethiopian military ride by on a patrol of Addis Ababa on Thursday. The Ethiopian capital has seen deadly unrest erupt in the wake of the shooting death of Haacaaluu Hundeessaa this week. Tiksa Negeri/Reuters hide caption 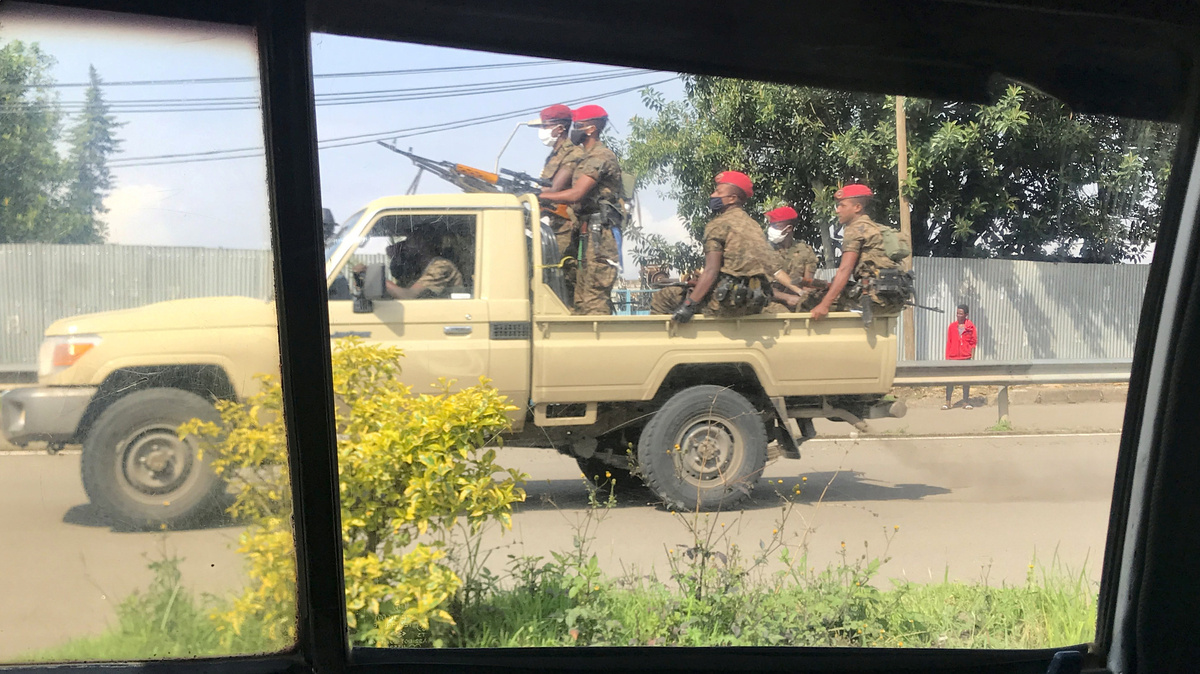 Members of the Ethiopian military ride by on a patrol of Addis Ababa on Thursday. The Ethiopian capital has seen deadly unrest erupt in the wake of the shooting death of Haacaaluu Hundeessaa this week.

Mourners gathered Thursday to bury Haacaaluu Hundeessaa, a popular singer and activist whose killing has catalyzed massive protests and stoked ethnic tensions for days across Ethiopia. Dozens of people have died in the unrest after the singer was shot to death earlier this week — but the violence didn't dissuade scores from seeking to attend his funeral in the town of Ambo.

The 34-year-old musician at the heart of the turmoil is a member of the Oromo ethnic group, the largest in Ethiopia. His songs provided the score for a swell of anti-government protests that handed power to the country's first Oromo prime minister, Abiy Ahmed. Two years later, Haacaaluu's death on the streets of the capital, Addis Ababa, put the match to a tinderbox of ethnic discontent.

At least 80 people have died in the ensuing clashes between security forces and and protesters, some of whom have burned buildings and set off bombs in the capital and the surrounding region.

The anger and frustration have been felt even in Minnesota, where demonstrators marking his death peacefully blocked traffic on a highway Wednesday in St. Paul. 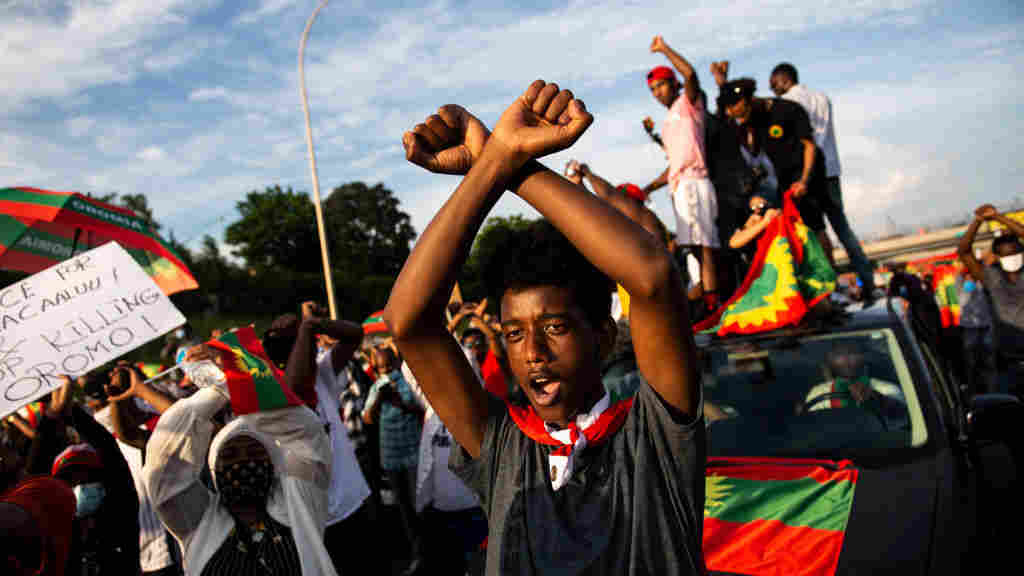 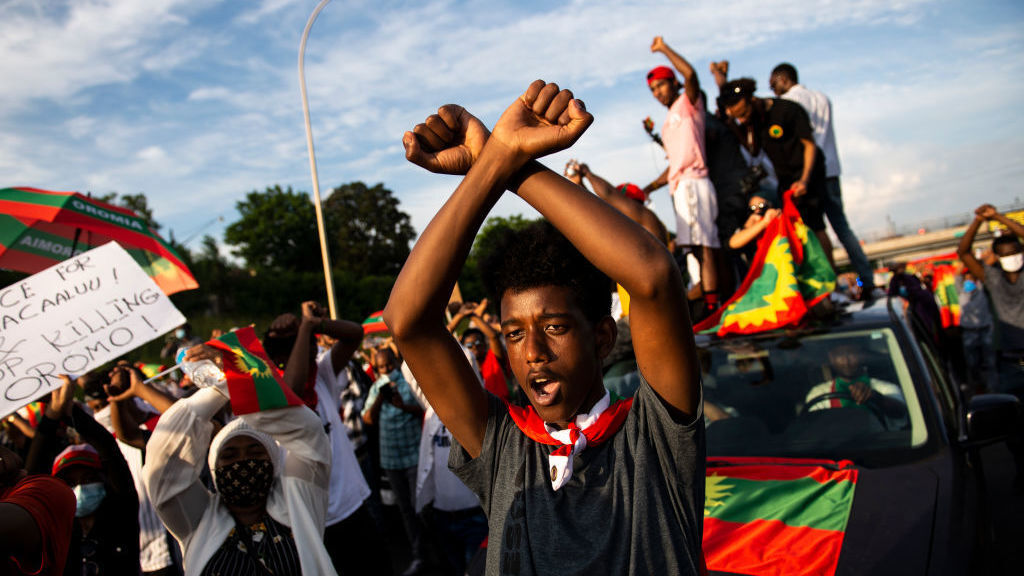 Demonstrators gathered Wednesday on a highway in St. Paul, Minn., to protest the death of the musician Haacaaluu Hundeessaa.

Abiy, a Nobel Peace Prize laureate, said authorities are investigating Haacaaluu's killing, while law enforcement has also tried to smother the upheaval. The government shut down the Internet and arrested at least two major opposition figures who had pressed the government — unsuccessfully — to allow the singer's funeral to be held in Addis Ababa. Authorities said the security situation for the event would be too volatile for the capital.

One of the prominent opposition figures arrested, Oromo media mogul Jawar Mohammed, is a former ally of Abiy's. But since having fallen out with the reformist prime minister, Jawar has sparred repeatedly with the government and spearheaded some massive protests of his own.

The government's response to the protests has alarmed international observers.

"Rather than restoring calm, the authorities' internet shutdown, apparent excessive use of force, and arrest of political opposition figures could make a volatile situation even worse," Laetitia Bader of Human Rights Watch said Wednesday. "The government should take prompt steps to reverse these actions or risk sliding deeper into crisis."

Security forces were in evidence again Thursday at the nationally televised ceremony. Reuters, citing residents nearby, reported that several people were injured during scuffles between security forces and protesters outside the stadium where the funeral was held.

"[Haacaaluu] is not dead," the slain singer's wife, Santu Demisew Diro, said at the ceremony, according to a Reuters translation. "He will remain in my heart and the hearts of millions of Oromo people forever."