Accessibility links
As China Imposes New Hong Kong Law, U.S. And Allies Take Steps To Retaliate The U.S. is cutting back its special treatment of the territory, while the U.K. offers a pathway to British citizenship for Hong Kongers. 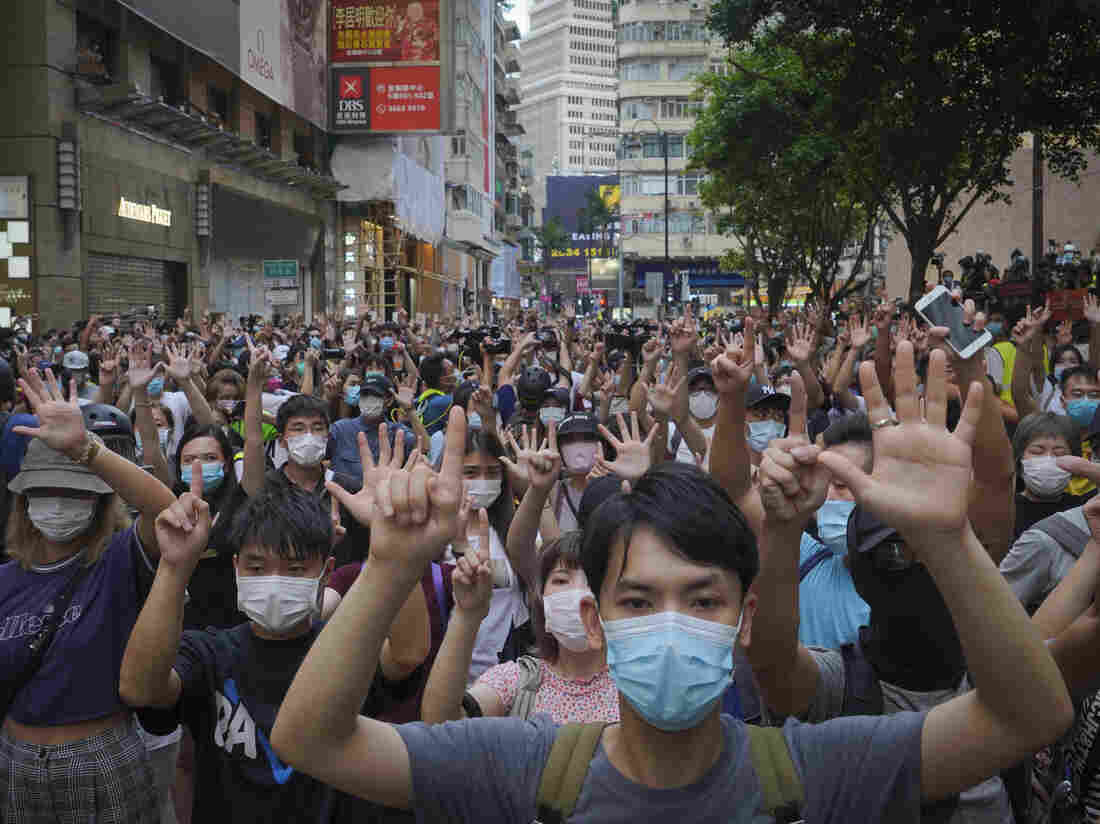 Protesters against the new national security law gesture with five fingers, signifying "five demands — not one less" on the anniversary of Hong Kong's handover to China from Britain in Hong Kong on Wednesday. Vincent Yu/AP hide caption 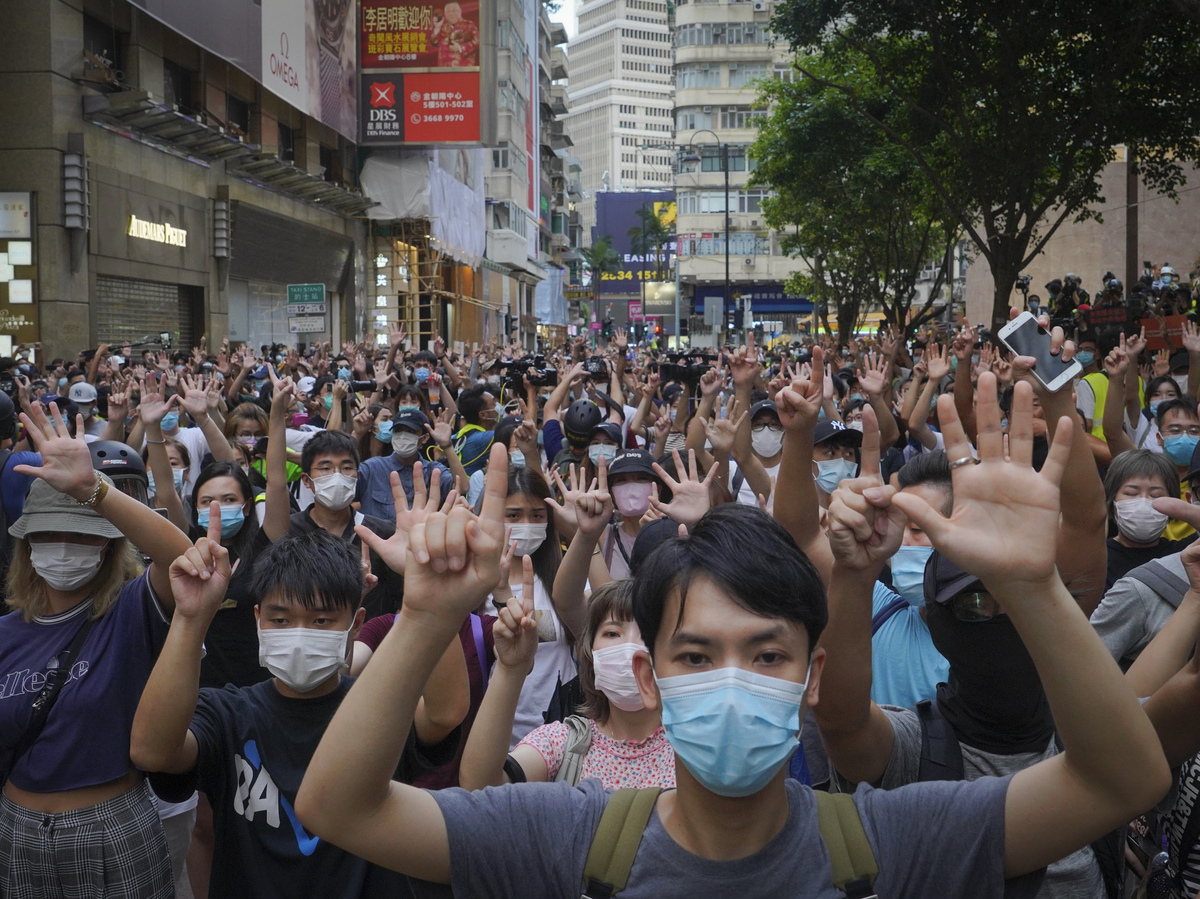 Protesters against the new national security law gesture with five fingers, signifying "five demands — not one less" on the anniversary of Hong Kong's handover to China from Britain in Hong Kong on Wednesday.

The law hands the central government almost unchecked legal power in the former British colony, which was promised a "high degree of autonomy" for 50 years when it was returned to China in 1997. Drafted secretly and enacted swiftly on Tuesday, it is considered by many analysts to be even harsher than expected.

Policymakers, activists and analysts outside China say it's critical now for governments from Washington to Tokyo to back their words with action by cranking up pressure on China's leadership while trying to help the people of Hong Kong.

In the short run, few expect China's emboldened leadership to blink. Over the long run, though, the hope is that pressure will lead to change.

"Obviously, more now has to be done that they have pulled the trigger," Rep. Chris Smith, R-N.J., said at a hearing on Hong Kong's future in the House Foreign Affairs Committee on Wednesday.

"We need to meet this as never before. We didn't do it after Tiananmen Square," he said, referring to the June 4, 1989, crackdown on pro-democracy protesters. "We acquiesced and they took note of that and said, 'You know, give it a little time and people will just let it go.' "

In late May, the Trump administration decertified Hong Kong for not being sufficiently autonomous from China. The U.S. has begun steps to remove elements of the special treatment that the territory has enjoyed for decades because it was different from other Chinese cities.

On Monday, the State Department announced an end to the sale of military equipment and other technologies to Hong Kong. The Commerce Department suspended preferential treatment and export license exceptions for Hong Kong the same day.

The steps may complicate China's plans to turn the sprawling Pearl River Delta in southern China into a coordinated economic powerhouse with Hong Kong as the technology hub, says Ho-Fung Hung, a professor of political economy at Johns Hopkins University who follows Hong Kong affairs.

Hung says China had been expecting access to certain technologies via Hong Kong that are unavailable on the mainland, but that has changed.

"Now we have this backdoor sealed by the U.S. as a response to the national security law, it will be a big problem for China," he said.

Last week, the State Department imposed visa restrictions on Chinese officials considered responsible for limiting freedoms in Hong Kong, though it did not name any.

Also last week, the Senate unanimously passed a bill that would require sanctions on Chinese officials who erode Hong Kong's freedoms and autonomy. And on Wednesday, the House passed legislation that would sanction banks that do business with Chinese officials involved in implementing the national security law.

Targeted penalties against individual Chinese officials could prove difficult to enforce because of myriad workarounds, according to Victor Shih, an expert in Chinese finance at the University of California, San Diego.

The "nuclear option" — stopping access to the SWIFT financial settlement system and imposing sanctions on banks lending money to the Chinese government or state-owned entities — would inflict pain on Beijing but it would also spark a financial crisis, he says.

Hong Kong's former colonial master, Britain, is paving the way for some 3 million Hong Kong people to be able to settle in the United Kingdom and apply for citizenship.

In Washington, Congress introduced legislation this week to make it easier for Hong Kongers to be classified as refugees and admitted to the United States.

"The U.S. needs to start offering more visas — work, student, scholarly, tourist, what have you — to Hong Kong residents, with a special focus on young people who have in many cases been at the forefront of the 2019 protests," says Thomas Kellogg, executive director of the Georgetown University Center for Asian Law.

Nathan Law, a Hong Kong activist who announced Thursday that he had left Hong Kong, told the House Foreign Affairs Committee on Wednesday there needs to be a "new guiding principle" to hold China accountable for rights violations, and international governments should take joint action.

In the short term, the Chinese government is unlikely to roll back the law and there are no guarantees that outside pressure will make any impact on how harshly it is implemented.

Even in the long run, some scholars and activists are not optimistic.

The United States imposed sanctions on China after the Chinese army suppressed peaceful protests in and around Beijing's Tiananmen Square. Within a few years, many had been lifted.

Wang Dan, a student leader at the time who's now an activist in exile, says there are lessons to heed.

First, countries must mount a coordinated response. In 1989, it was piecemeal.

And second, he says, "We must realize, in the long term, without regime change happening in China, nothing can be changed or even improve. There will be more and more trouble."