Accessibility links
Does Plexiglass Keep You Safe From Coronavirus? Sales Rise As Businesses Reopen Demand for plexiglass has skyrocketed due to the coronavirus as businesses worldwide install protective barriers. 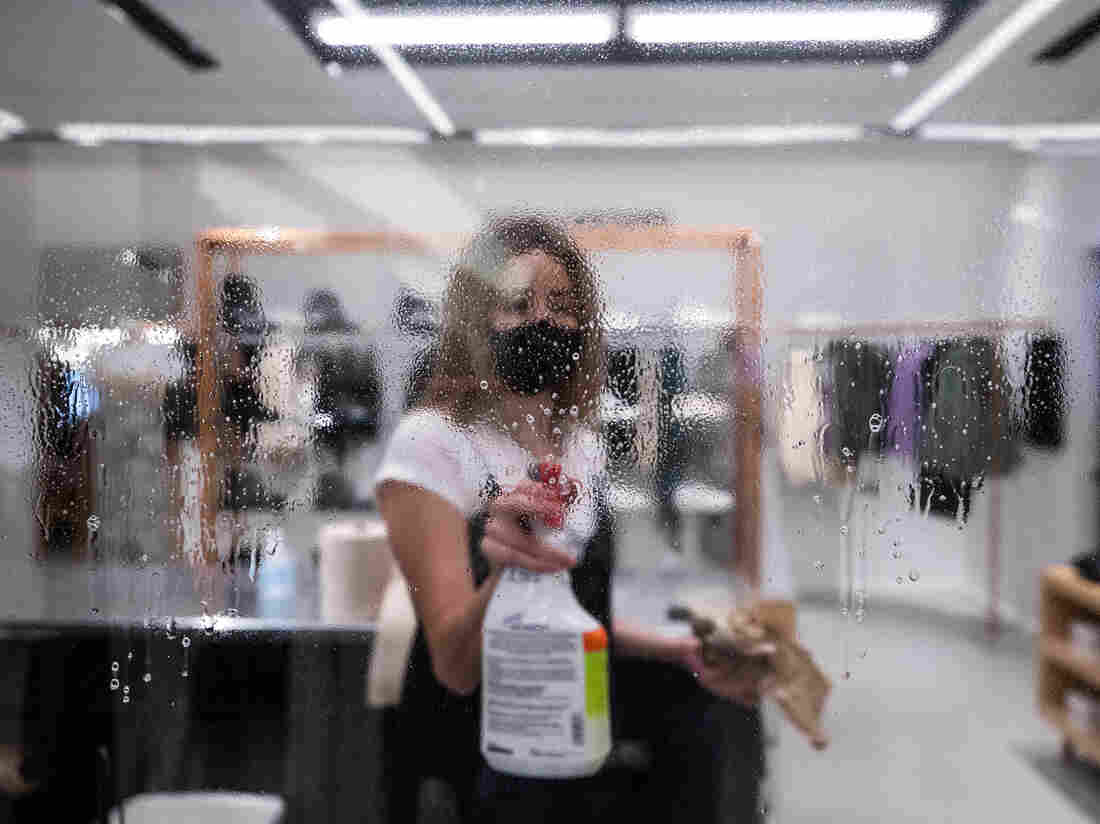 An employee wearing a protective mask cleans a plexiglass barrier before reopening at a Bloomingdale's store in New York City on Monday, June 22, 2020. Jeenah Moon/Bloomberg via Getty Images hide caption 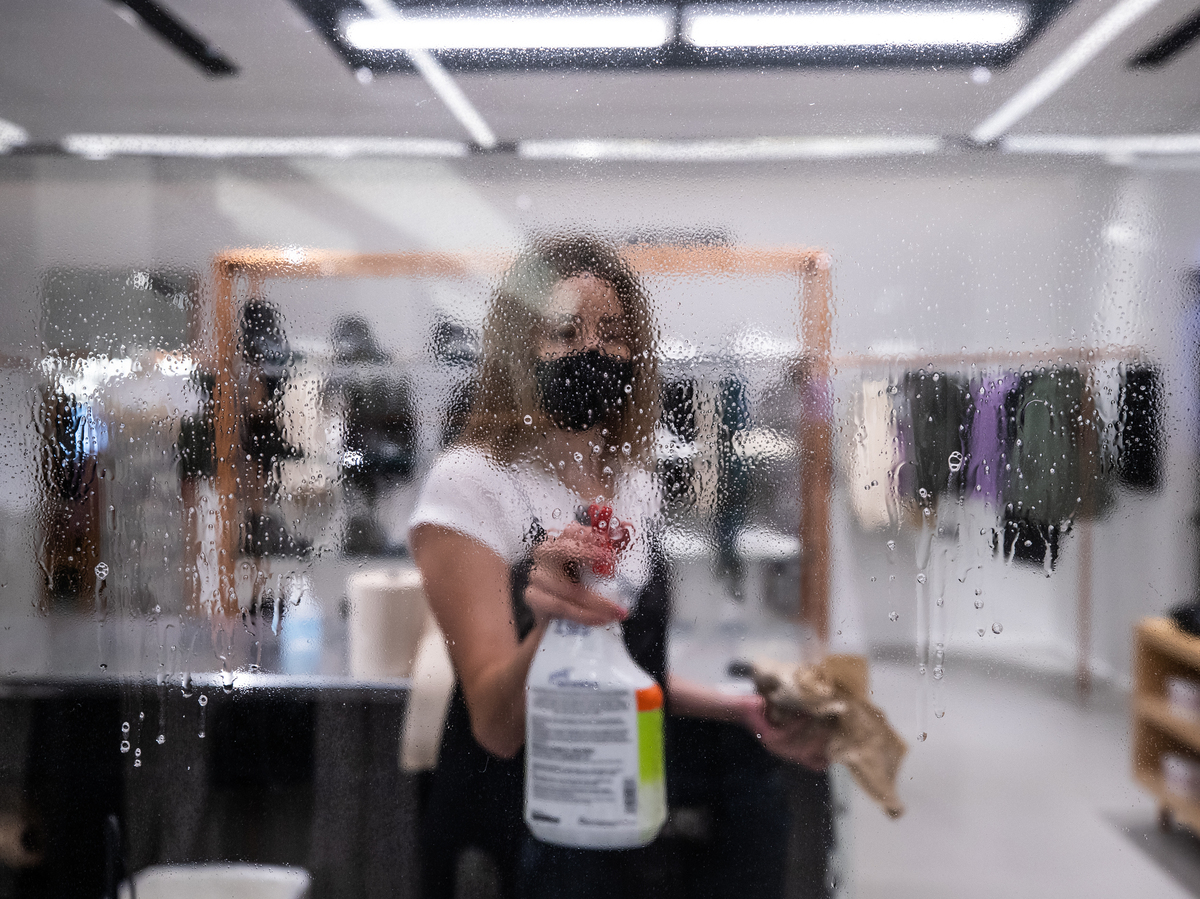 An employee wearing a protective mask cleans a plexiglass barrier before reopening at a Bloomingdale's store in New York City on Monday, June 22, 2020.

With coronavirus cases surging in the U.S., many people are concluding they'll have to learn to live with the virus until a COVID-19 vaccine is widely available — and that's led to a huge increase in orders for plexiglass and other types of clear plastic barriers meant to keep us safe.

"Demand is ridiculously high," said Jackie Yong, a 17-year employee of J. Freeman, Inc., a plastics distributor and sign supplier in Boston whose products include plexiglass and other plastic sheets. "Everything's just been flying out the door."

That's the story of the plexiglass industry these days: As many businesses struggle to reopen safely during the pandemic, from nail salons to barbershops to restaurants to casinos, they're installing protective barriers to try to prevent employees and customers from catching the virus.

"People are afraid they're going to lose their businesses, and so they're trying to put up as much protection as possible so that when people come, they'll feel safe," said J. Freeman, Inc., owner Jacqueline Freeman.

The crush of orders began in March, after the World Health Organization labeled the coronavirus outbreak a pandemic and recommended using glass or plastic barriers to reduce exposure to COVID-19.

"Quickly, overnight, demand increased roughly by four times what it was the prior year," said Craig Saunders, president of the International Association of Plastics Distribution, a trade group. "And this wasn't a local demand in North America; this was a global demand." 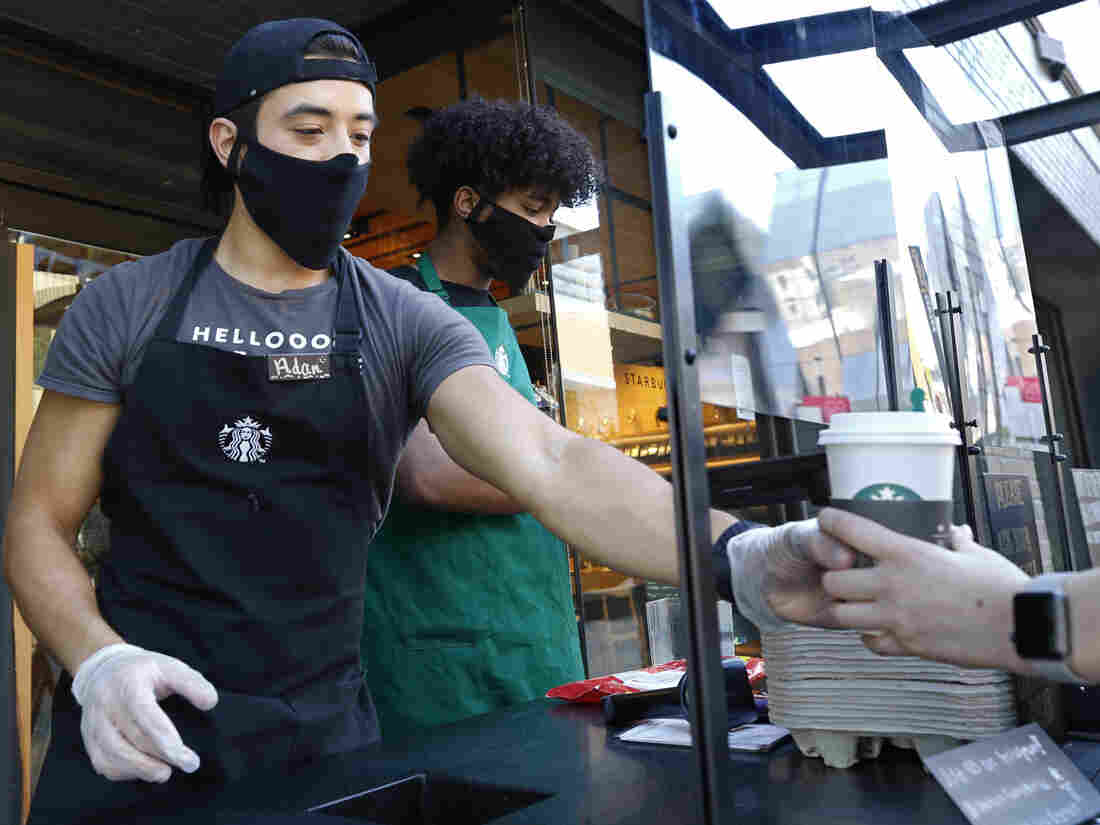 Starbucks shift supervisor Adan Miranda wears a face mask as he serves a drink to a customer while standing behind a plexiglass shield in a booth outside the store in Sacramento, Calif., May 21, 2020. Rich Pedroncelli/AP hide caption 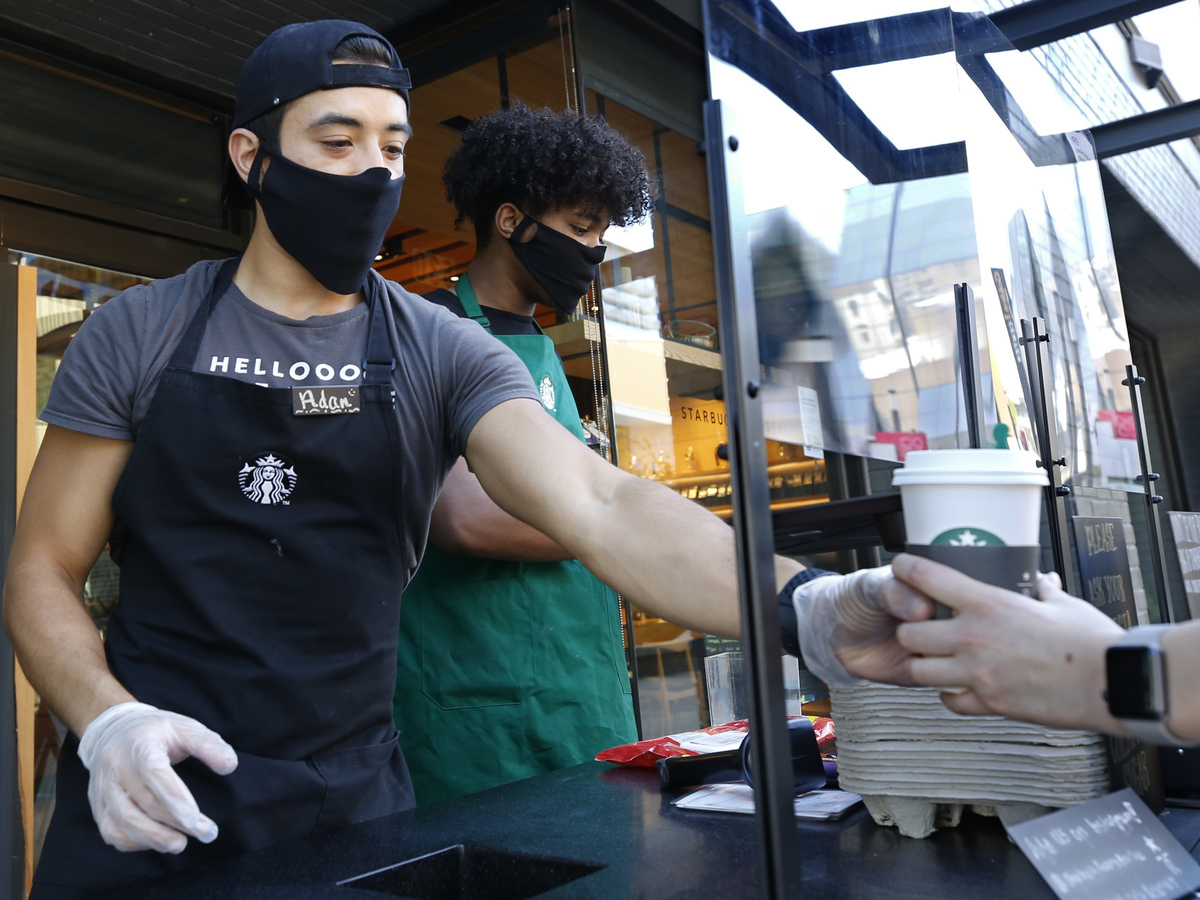 Starbucks shift supervisor Adan Miranda wears a face mask as he serves a drink to a customer while standing behind a plexiglass shield in a booth outside the store in Sacramento, Calif., May 21, 2020.

According to Saunders, that has created six-month waits for the product and more orders than manufacturers can keep up with. He said demand will likely remain strong as states continue their phased reopenings, and as schools and colleges try to bring students back to campus safely.

"There just is no material in the pipeline," he added. "Everything that is received in is already confirmed for and sold almost immediately."

As demand outstrips supply, some prices for plastic sheets, which are generically known as acrylics and polycarbonates, are also rising. According to J. Freeman, Inc., one of its vendors recently wanted five times the usual price.

This worldwide clamor for barriers has been a lifeline for what had been a declining industry.

"This was previously a sector that was actually quite unprofitable, whereas now it really is the sector to be in," said Katherine Sale of Independent Commodity Intelligence Services, which gathers data on global commodities markets.

According to Sale, demand for plastics had been shrinking in the decade prior to the pandemic. That's partly because as products such as flat-screen televisions get thinner, for example, they don't require as much plastic to be manufactured. And when the pandemic shut down the construction and automotive industries, that reduced demand for clear plastic car parts like headlights and taillights.

But the rush for protective plastic barriers has been a boon for manufacturers, which are already booking orders for 2021, Sale said.

"And if they could produce more, they said that they could sell ten times what they're currently selling, if not more," she added.

"It's completely out of hand," said Russ Miller, store manager of TAP Plastics in San Leandro, California, which has 18 locations on the West Coast. "In 40 years of selling plastic sheets, I've never seen anything like this."

TAP's sales were up more than 200 percent in April, according to Miller, and he said the only reason its sales have declined since then is the company has no more full plastic sheets to sell, even though earlier this year TAP ordered a massive supply that it had expected to last for the rest of the year.

Meanwhile, the uses for clear plastic barriers are becoming more creative and unusual. Miller said he's seen designs for protective guards and shields that he considers "bizarre," including one that mounts on your chest, curves in front of your face, and is meant to be worn while walking around.

A French designer has created a lampshade-shaped clear plastic dome that hangs over the heads of guests at restaurants. And an Italian designer has made a clear plastic box for social distancing on beaches — basically, a plexiglass cabana. 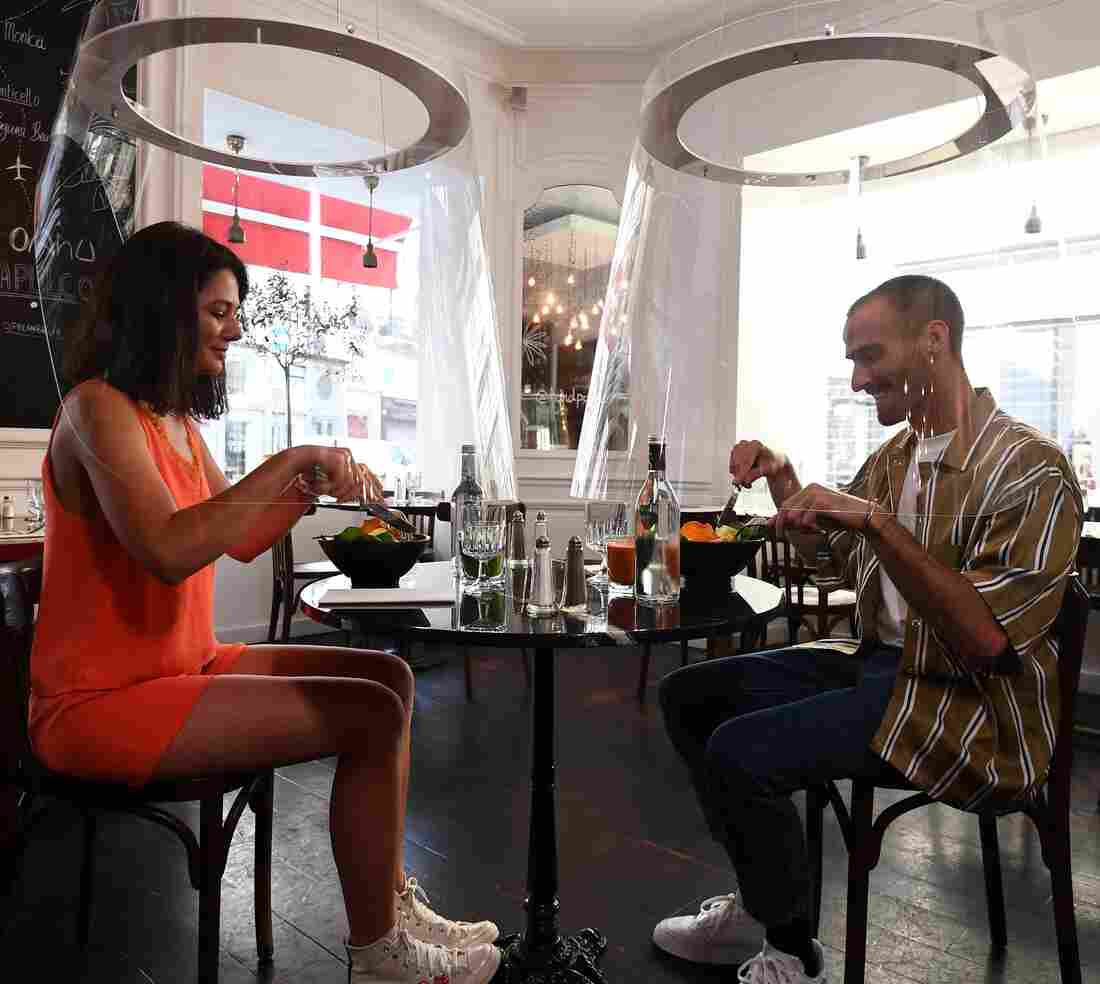 A couple has lunch under plexiglass protection designed by Christophe Gernigon at the H.A.N.D restaurant, on May 27, 2020, in Paris, as France eases lockdown measures taken to curb the spread of the COVID-19 pandemic. Alain Jocard/AFP via Getty Images hide caption 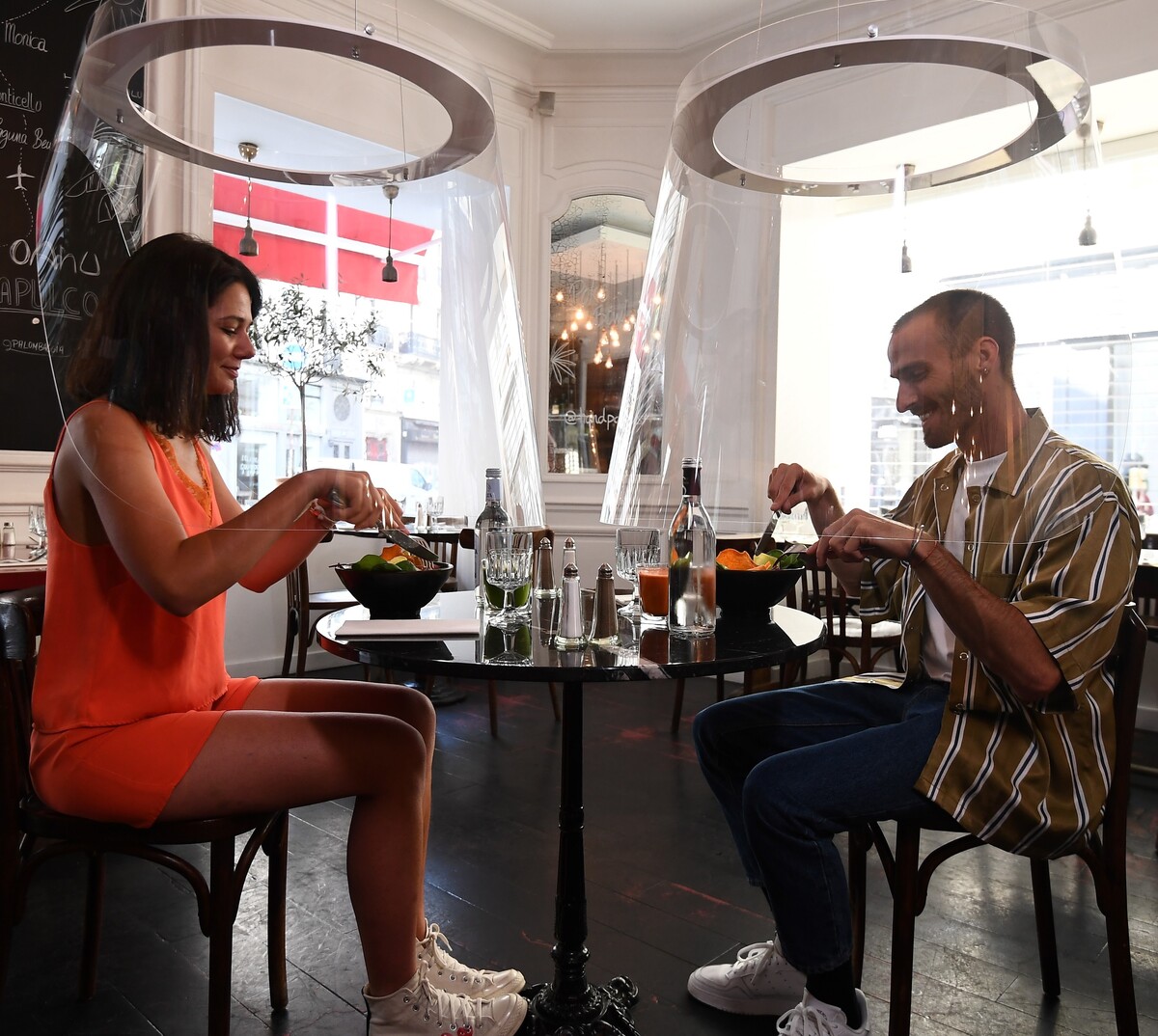 A couple has lunch under plexiglass protection designed by Christophe Gernigon at the H.A.N.D restaurant, on May 27, 2020, in Paris, as France eases lockdown measures taken to curb the spread of the COVID-19 pandemic.

It may be difficult to envision some of these inventions becoming part of society, but if the pandemic can't be controlled, contraptions that might have previously stretched the imagination may become a reality.

For instance, Miller said his company is now selling plastic sheets to numerous schools, which are developing ways to separate students during lunchtime and in other group settings.

'"They wanted dividers for nap time," recalled Miller, "which was kind of sad."

But to exist during a pandemic without a vaccine, that may be what the world has to look like.