Accessibility links
'The Wrong Complexion For Protection.' How Race Shaped America's Roadways And Cities An expert in urban planning and environmental policy explains how race has played a central role in how cities across America developed — often in ways that hurt minority communities. 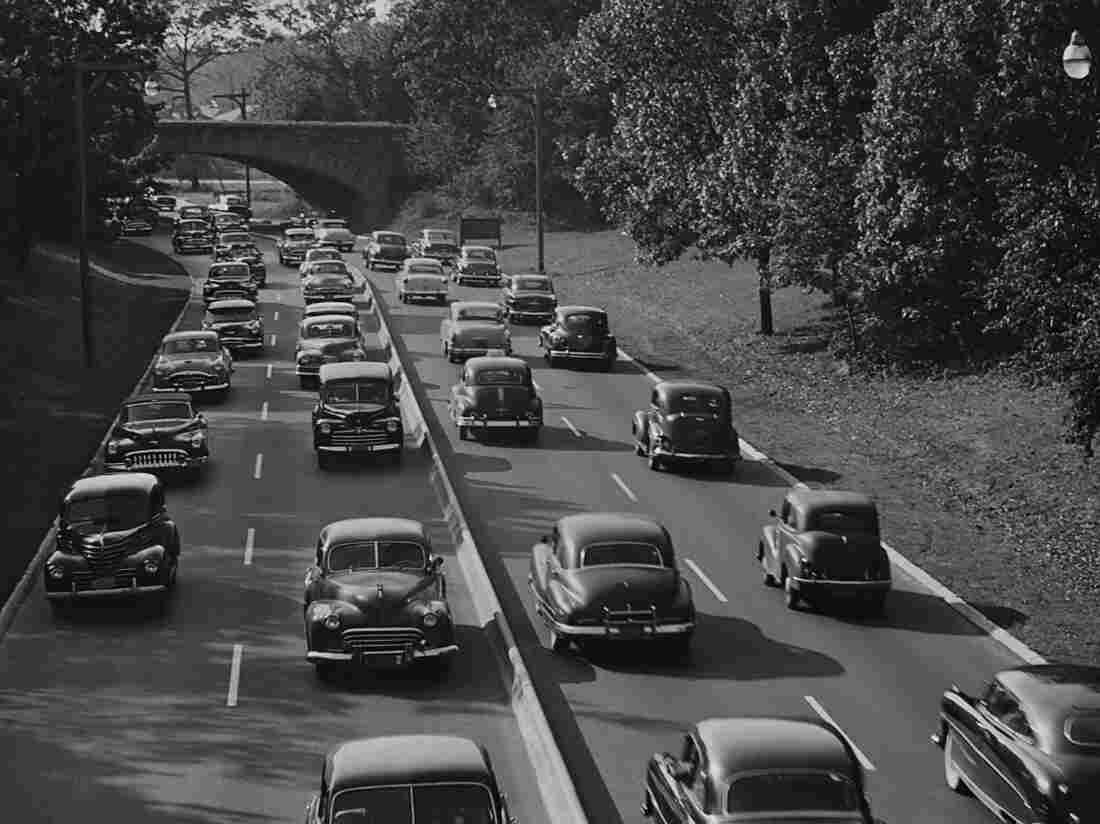 Cars on the Southern State Parkway in Nassau County, circa 1960. The urban planner Robert Moses, according to biographers, designed the road so that bridges were low enough to keep buses — which would likely be carrying poor minorities — from passing underneath on the route from New York City to Long Island's beaches. Pictorial Parade/Getty Images hide caption 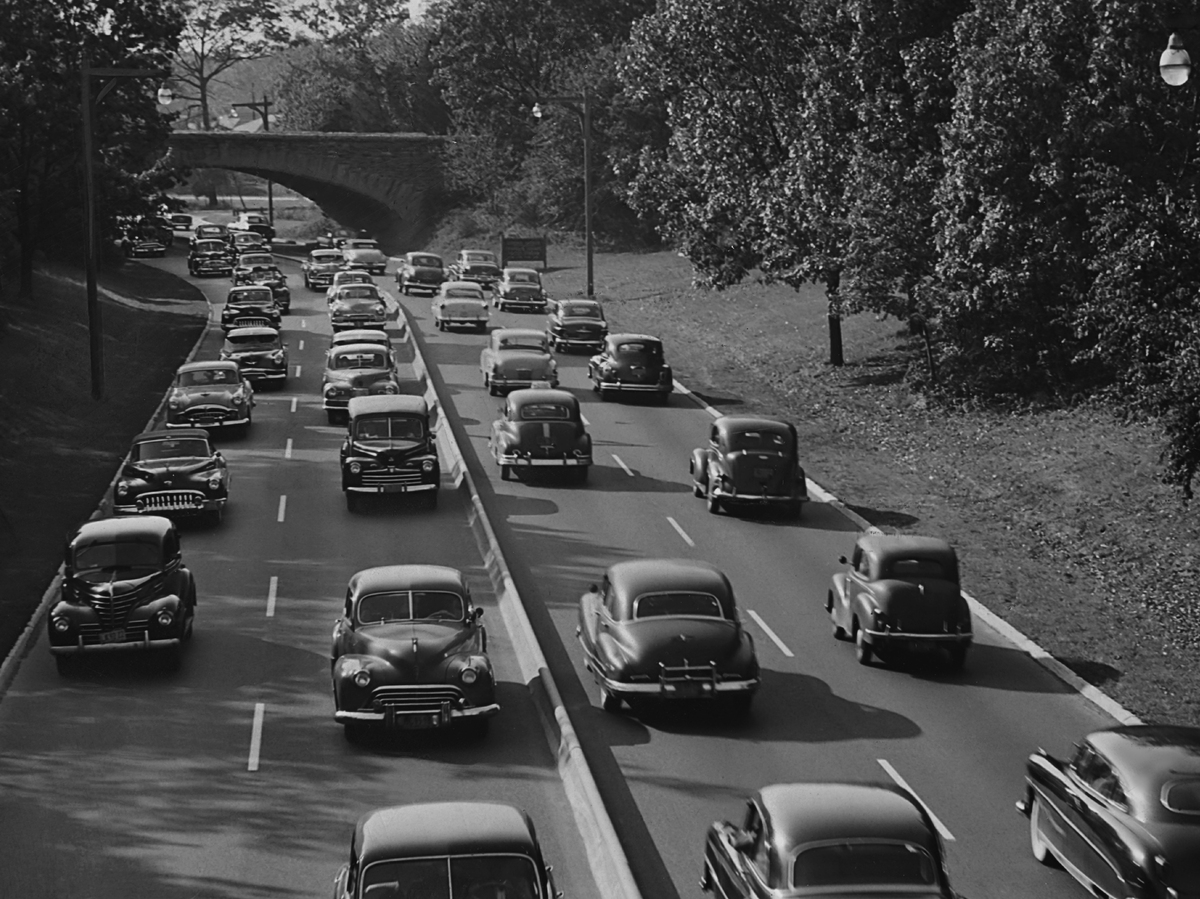 Cars on the Southern State Parkway in Nassau County, circa 1960. The urban planner Robert Moses, according to biographers, designed the road so that bridges were low enough to keep buses — which would likely be carrying poor minorities — from passing underneath on the route from New York City to Long Island's beaches.

When the urban planner Robert Moses began building projects in New York during the 1920s, he bulldozed Black and Latino homes to make way for parks, and built highways through the middle of minority neighborhoods. According to one biography, Moses even made sure bridges on the parkways connecting New York City to beaches in Long Island were low enough to keep city buses — which would likely be carrying poor minorities — from passing underneath.

But Moses was no outlier. The highways and public spaces that shape our cities were often intentionally built at the expense of Black, Latino and other minority Americans.

Robert Bullard, a professor of urban planning and environmental policy at Texas Southern University, says race has played a central role in how cities across America developed - and in how they continue to grow.

"Transportation has always been embedded in civil rights and racism," says Bullard. He points to Plessy v. Ferguson, the landmark 1896 Supreme Court case that upheld racial segregation in state laws. Homer Plessy, the plaintiff, was arrested for boarding a "whites-only" train car in New Orleans to protest segregation on Louisiana's railways.

While the court would eventually come to reject the "separate but equal" doctrine enshrined by the case starting in the 1950's, Bullard says even today, not all transportation is created equal. Instead, cities often base plans for bus routes, highways and other infrastructure on a premise that some communities have more worth than others.

Bullard, who has written and edited over a dozen books on the relationship between race, cities and the environment, says that historically, urban planners followed the path of least resistance. And because minority communities were already disenfranchised, they didn't have a say in how their neighborhoods were developed.

Some progress has been made as laws have changed around practices like housing segregation, but Bullard says minorities are often still excluded from planning decisions. He calls the dynamic at play "highway robbery," wherein minorities pay taxes at the same rates as white Americans, but those dollars then subsidize racist patterns of development.

Freeways and bus routes, however, are just one part of a bigger picture: what urban planners refer to as "locally unwanted land-uses." These projects include highways, landfills, incinerators, bus depots and other kinds of projects that disproportionately fall in minority communities and often cause pollution and harm the health of residents.

Bullard argues that losing out on "the good stuff" ultimately shortens Black and brown lives. Minorities are disproportionately likely to live in areas with more pollution and in areas that are flood-prone.

They also live in communities that end up retaining more heat due to a lack of parks and green spaces. The resulting "urban heat island" effect can turn deadly for minorities during warm weather. In Chicago, a particularly hot summer in 1995 led to over 700 heat-related deaths. Most of the heat wave's victims were elderly, poor and disproportionately Black.

Bullard also points to pollution as part of the reason why African Americans and Latinos are dying at higher rates from COVID-19 than other racial groups. Asthma is a risk factor for COVID-19, and several studies have linked African-Americans' high prevalence of asthma to environmental pollution. And preliminary research from researchers at Harvard has found that areas with more air pollution are seeing a corresponding rise in COVID-19 deaths.

At a time when statues of American historical figures who owned slaves or perpetuated colonialism are tumbling across the country, Bullard says movements for racial and environmental justice have long been removing "invisible statues" by changing the routes of freeways and transit systems and opening up access to clean, affordable and efficient public transportation to minority communities.

One model he points to is Los Angeles, where in 1996 organizers and local residents filed a class-action lawsuit against the Metropolitan Transit Authority to stop it from diverting federal funding to a light rail line in the predominantly white suburbs. An out-of-court settlement forced the MTA to build 278 new environmentally-friendly buses and won cheaper, safer bus rides for poor and minority residents.

Bullard says communities in Atlanta, the Bay Area, Chicago, New York and Boston have had similar successes through grassroots campaigns, lawsuits and administrative complaints under Title VI of the Civil Rights Act.

Ultimately, Bullard says, these victories are about making sure that access to the city, nature, bike lanes and walkable neighborhoods aren't just the domain of the white middle class, but are open to poor, nonwhite people as well.

"We've made a lot of inroads in making sure that monies flow back to rebuild transportation, and that our dollars can be flexible in a way that doesn't just build roads and highways, but also can rebuild communities and livability."