Accessibility links
Ennio Morricone, Iconic FIlm Composer, Has Died At Age 91 The iconic Italian composer, who scored The Good, the Bad and the Ugly and more than 500 other films, died Monday in Rome. 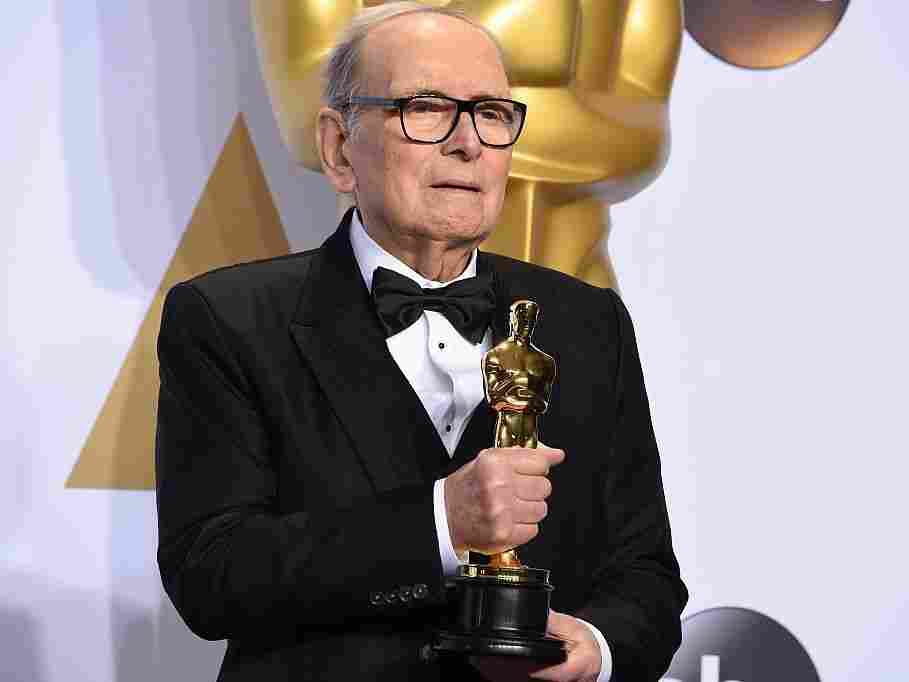 Composer Ennio Morricone, posing with his Oscar for The Hateful Eight in 2016. He died Monday at age 91 in Rome. Robyn Beck/AFP/Getty Images hide caption 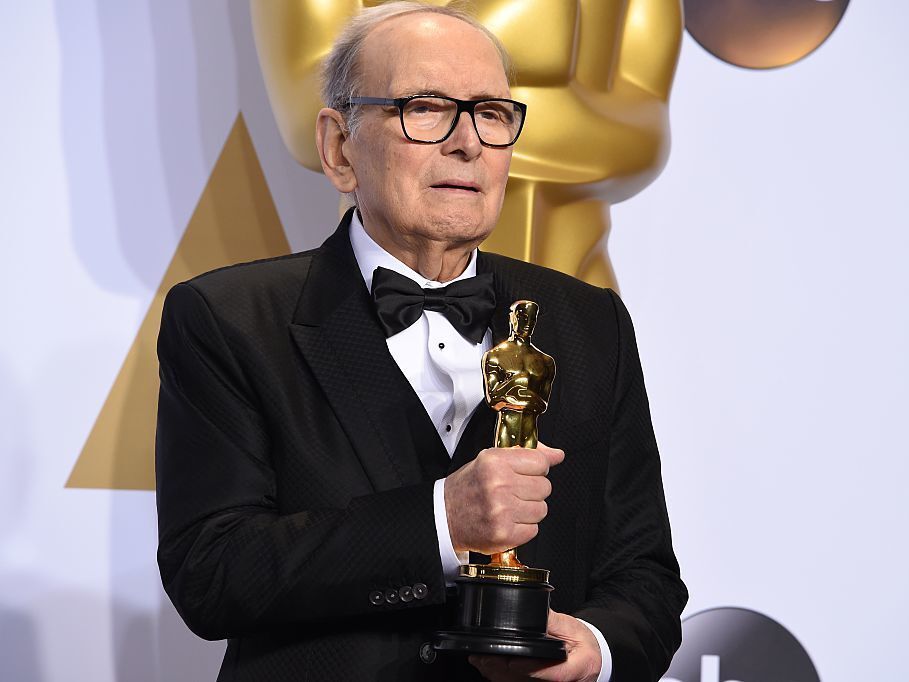 Composer Ennio Morricone, posing with his Oscar for The Hateful Eight in 2016. He died Monday at age 91 in Rome.

The iconic score to The Good, the Bad and the Ugly: This is the sound of the American West, at least filtered through the ears of an Italian — specifically, composer Ennio Morricone. He was a giant in the world of film scores who wrote the music for more than 500 movies.

Morricone died Monday in Rome at the age of 91. The Italian cultural ministry confirmed his death in a statement that called him "a musician of refined skill who with his melodies has been able to excite and make the whole world dream."

When Morricone wrote a score for a Western, he used sneaky tricks to make those evocative sounds, like whistles, animal calls, creaks, gunshots and groans. And his most famous sound?

Morricone worked closely with directors to create a new kind of score. Dialogue was often minimal; instead, the soundtrack did the talking.

Historian Christopher Frayling wrote a book about the Italian Westerns. He told NPR in 2007 that the composer — and the directors he worked with — wanted to infuse those films with, among other things, a sense of humor.

"They wanted something that was much more hip, much more related to pop," Frayling said. "So it's Italian folk instruments plus rock music of the mid-1960s, and it was an astonishingly raucous, noisy sound."

The creator of that sound was born in Rome in 1928. Ennio Morricone began writing music at the age of six, and never stopped. In the mid 1960s, he discovered the contemporary music scene in Italy and joined a collective called Gruppo di Improvvisazione Nuova Consonanza that was influenced by John Cage's avant-garde experimentation.

"As a joke I called these friends of mine," Morricone told NPR. "And I started telling them to do kind of a sound like groans or very strange sounds, and I started conducting them. And I also did sounds myself."

From that early experience, Morricone was off and running toward one of the most celebrated film-scoring careers of all time. It began with Il Federale in 1961 and continued through his collaborations with director Sergio Leone on a famous series of Westerns that included A Fistful of Dollars; For a Few Dollars More; The Good, the Bad and the Ugly; and Once Upon a Time in the West. But that wasn't all he did.

Some of his best-known scores included the political drama The Battle of Algiers; Brian de Palma's take on 1930s gangsters, The Untouchables; The Mission, about a Jesuit priest in South America; and Cinema Paradiso, about a young boy growing up after World War II with a love of movies.

Frayling had a chance to meet the choirmaster who worked on another Morricone film and asked what words the choir was actually singing. "He said, 'I can't remember,' " Frayling recounted. " 'They're just sounds, you know, and the human voice is used as another musical instrument.' "

But while the words might have been imprecise, the maestro's hand still guided every aspect of the production. Many film composers write the music, and then hand the score off to someone else to orchestrate. But Morricone insisted on being part of each step in the process.

"Because a real composer has to take care of all his music," Morricone told NPR. "And those who actually just write the melody and then hand it on to someone else are not. To me, they're not real composers."

This attention to detail paid off. Between 1979 and 2001, Morricone was nominated for six Academy Awards, and he was presented with an honorary Oscar in 2007.

He finally won the best original score prize outright in 2016 for Quentin Tarantino's The Hateful Eight, but none of it seemed to go to his head. He told NPR that he didn't think of himself as having created that iconic world of the Wild West.

"I understand and I know that a movie kind of belongs to a director," he said. "So what I do is follow him. What I think I have done is specified, and made clearer, what the characters were feeling."