Accessibility links
2 Brothers At Bilio Are Determined To Make A Better Mask Brothers Billy and Nick Smith have designed a reusable mask that's knit, not sewn. Seamless and sustainable, it's made from polyester, spandex, nylon and an antimicrobial silver-coated yarn. 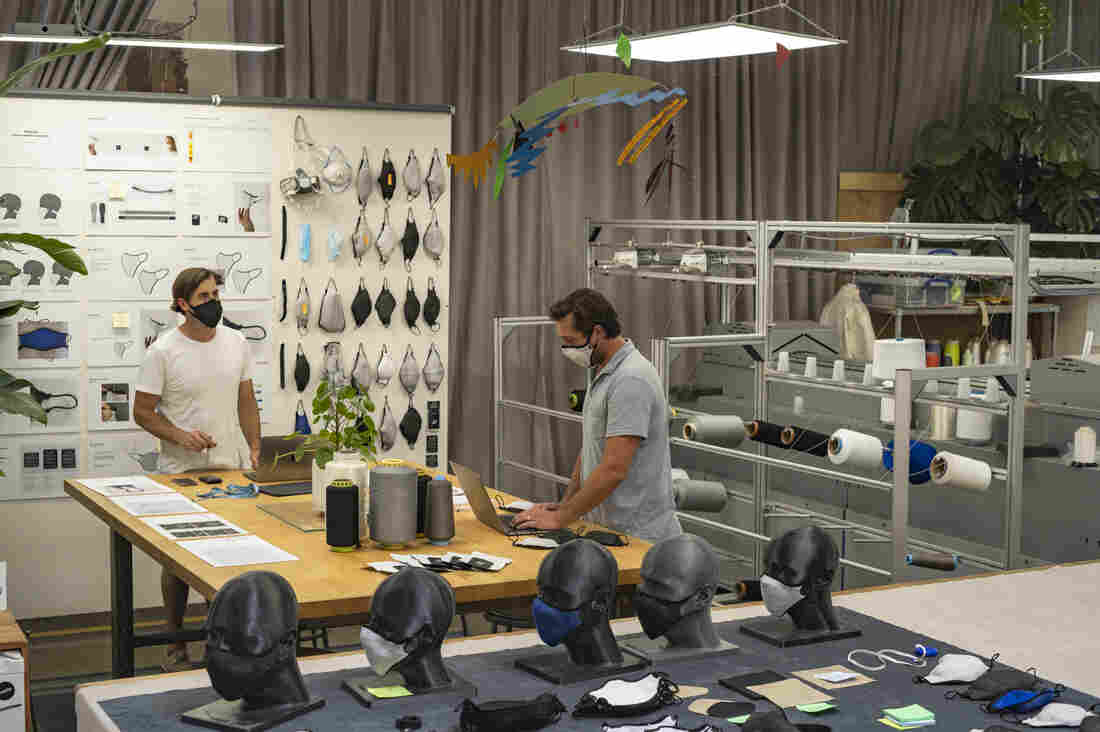 Five years before the coronavirus pandemic, Bill Gates didn't mince words: "If anything kills over 10 million people in the next few decades, it's most likely to be a highly infectious virus, rather than a war," he said at the 2015 TED conference in Vancouver, Canada.

Also at the conference, the Gates Foundation invited attendees to don plastic boots, overalls, masks and gloves in a hands-on demo designed to help people experience how difficult it was for doctors — at the time fighting Ebola — to protect themselves while working.

The Bill & Melinda Gates Foundation (one of NPR's funders) was posing a challenge to the conference attendees — founders of large tech companies, award-winning designers and inventors of all stripes — to take the possibility of a global pandemic seriously and solve the problematic limitations of personal protective equipment.

With that challenge in mind, NPR tracked down two California brothers determined to create a mask that will fit well, be reusable and durable, and incorporate advanced textile technology.

Nick and Billy Smith have design in their DNA. Their parents are architects; their grandfather was an engineer. Growing up in Mill Valley, Calif., the brothers turned their parents' garage into an industrial arts paradise where they tinkered with all kinds of materials, including fabric, fiberglass and wood.

Younger brother Nick remembers getting a set of power tools for his sixth birthday. "Somewhat safe power tools — to promote the woodworking," he says, but still: "At a very young age, I think it became very clear my parents were never going to be able to park in that garage," he laughs.

Both surfers, the Smith brothers initially became interested in materials in 2005 when they both contracted MRSA, a type of staph infection.

"Billy contracted it first," says Nick. "It was in a wetsuit that I thought was mine. And I put it on, and sure enough, we both ended up with a really awful case of staph infection."

Billy says it was one of the "biggest scares" he has ever had: "I was in the hospital for about two and a half weeks, and I lost nearly 20 pounds," he recalls. He still has a scar from an operation to treat the infection.

Two years later, Billy was designing wetsuits for Patagonia. He says he can't claim those wetsuits prevented staph infections, but the process got him thinking a lot about how the quality of a product's design and materials can help solve bigger problems. Billy went on to design for Apple, where he became the co-inventor of five patents, including one for a seamless, leather iPhone case.

In 2015, Billy founded his own design and product development company called Bilio. Nick handles business development and innovation for the company. Their clients include Allbirds and Steelcase. When the pandemic hit, they and a team of 12 designers and engineers got to work to create a face mask for the first time. Everyone was on board, Nick says. The brothers are pretty dogmatic about certain design principles. First, they are knitting evangelists who shun the "cut and sew" approach.

"I take a bit of offense to seams and stitching and sewing," says Billy, who believes the results with knitting are infinitely better at creating "uninterrupted surfaces" and "transitions."

"There's a much more considered approach ... to feel and how things will react to your body when they're on your face or ... your hand or your foot," he explains. Now, of course, we're not talking "knit one, purl two" with needles here. Bilio uses a process called zonal engineered knitting that, in the case of the mask, uses facial sizing data to inform the design.

Another one of the Smith brothers' principles: sustainability.

"We're using a process where we only knit what we need, which is different from a traditional die-cut and sew approach," says Nick. "So there's very little waste in this product — actually, less than a gram."

Bilio masks are currently produced at a knitting mill in North Carolina, and Billy says they're also exploring mills in Missouri and Los Angeles. He says they're committed to domestic manufacturing and didn't even consider producing masks overseas where labor costs might be cheaper.

"There's really beautiful things happening in America around knitting," he says. "We're also avoiding a lot of trouble having to ship things around the world."

As Billy explains it, the materials they use in their products matter as much as the design. The Bilio mask is made of recycled polyester, a small percentage of spandex and nylon, and a silver-coated yarn called X-Static — which is also used in sportswear and medical supplies. 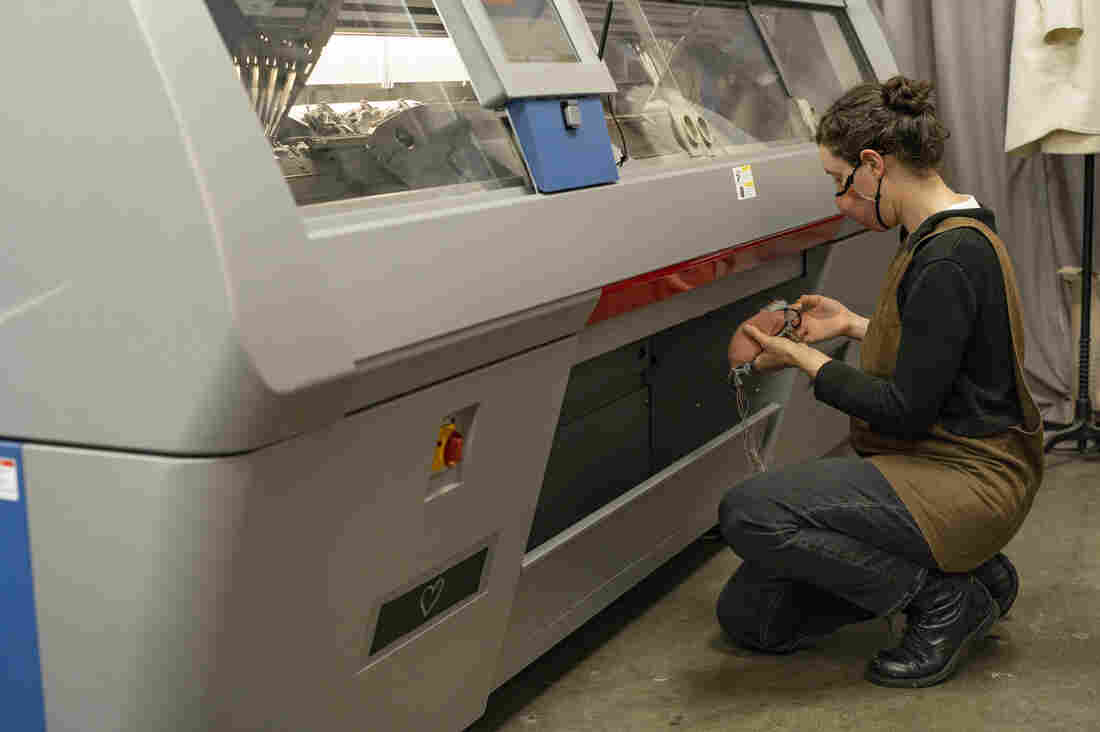 While X-Static fiber may be new, silver's antimicrobial properties are timeless, says Joel Furey, co-founder of Noble Biomaterials, the company that makes X-Static. "Even before the microbiology was known, people would use silver for its healing properties and its ability to prevent the growth of organisms in, say, drinking water or milk," says Furey. "It's had this magical quality to it since the beginning of recorded time."

Some have suggested that wearing masks keeps us from touching our face. But, Furey asks, "what if the mask itself is contaminated and you're touching the mask?" He says the objective is to "reduce or eliminate the growth of microbes directly on the surface of the mask."

Furey does not claim that a mask with Noble Biomaterials' silver-coated fibers will keep everyone 100% safe, but X-Static's antimicrobial properties are approved by the Environmental Protection Agency.

PHOTOS: The Masks Of Congo Are Worn To Protect, To Protest — And To Strike A Pose

So between the knitted design and the materials, is the Bilio mask effective?

We asked researchers Loretta Fernandez and Amy Mueller at Northeastern University to test the Bilio mask. They've been testing the performance of a range of masks, measuring to see how well they protect the wearer from inhaling particles that may carry the coronavirus.

Mueller says, for the Bilio mask, "We came up with a mean particle removal efficiency of around 82%." This means the Bilio mask filtered out 82% of the particles in the room for the person wearing the mask at the time of testing. For reference, Mueller says, the results for the more than 50 cloth masks they tested ranged from a low of 28% to a high of 94%. 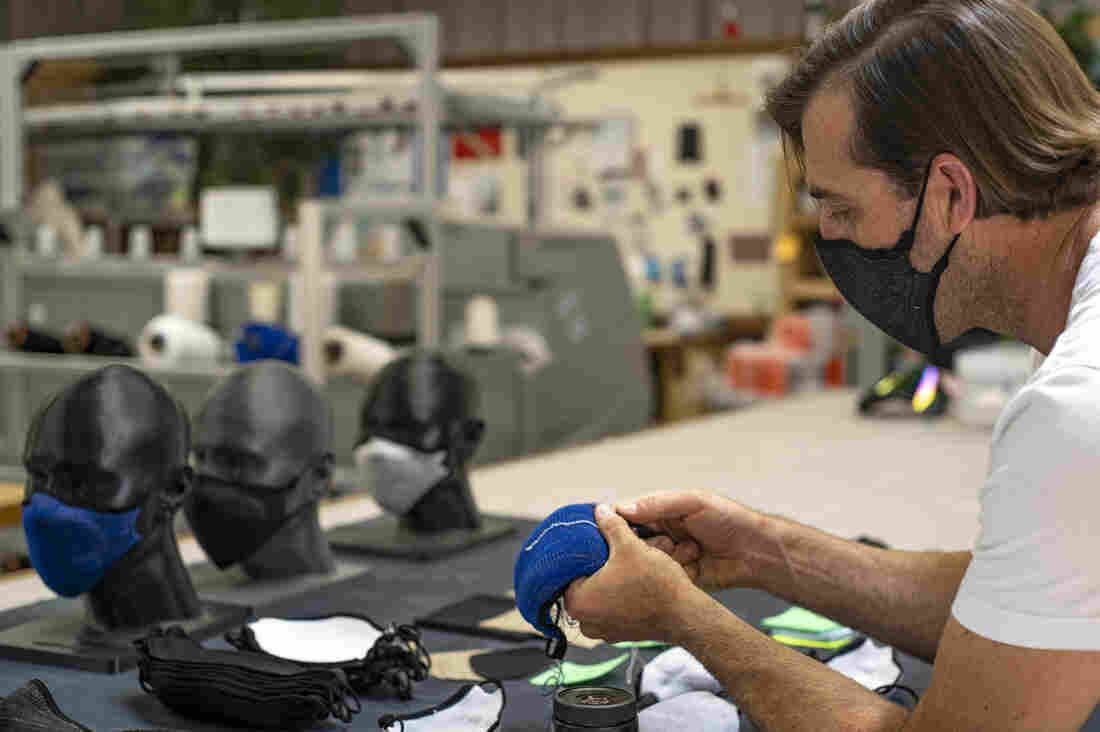 Billy Smith counts rows in the knit structure of a mask to ensure that specifications for fit and sizing meet company standards. Nick Rubalcava/Bilio hide caption 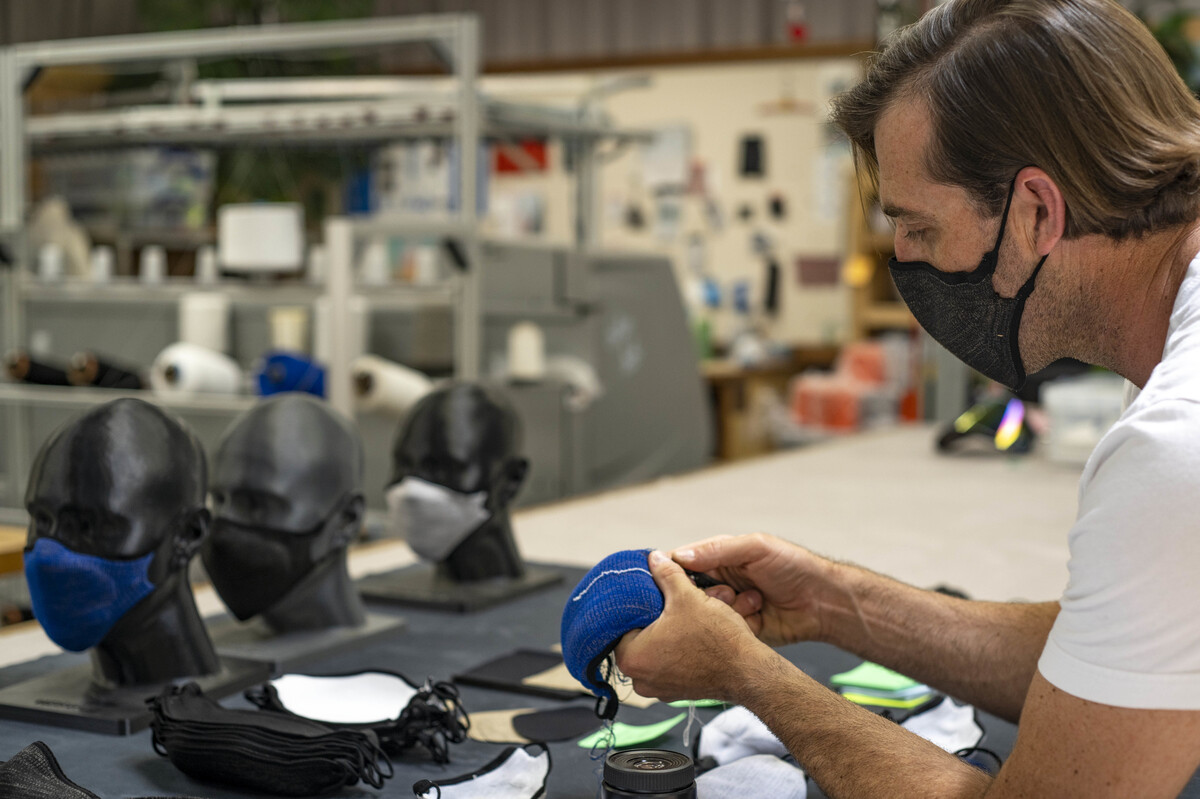 Billy Smith counts rows in the knit structure of a mask to ensure that specifications for fit and sizing meet company standards.

Among those cloth masks, the Bilio came in 10th overall and second for the masks they tested that have ear loops.

Fernandez says she was surprised the Bilio scored so well because it's smaller than many of the masks they've tested. Since it's knitted, she was able to mold it to her face. "As soon as I pinched it around my nose, the filtration efficiency boosted. So I think that fit around the nose really does help," says Fernandez. "The nose tends to be where a lot of the air leaks out and then around the cheeks as well. So this one did fit in those areas without having to have a lot of surface area to the mask."

The Curious History Of The Mask

Bear in mind that no mask offers full protection, nor should wearing a mask be seen as a substitute for physical distancing of at least 6 feet, frequent hand-washing and avoiding crowds.

Billy and Nick Smith say they continue to refine the Bilio mask based on testing and feedback from customers. There's a lot to consider: breathability, comfort, adapting the mask to different climates, sizing. Nick says sentiments around how a mask should perform are "changing rapidly."

"What we heard as feedback three weeks ago is already different from what we're hearing now," he says. "People that wanted a tight seal and wanted to make sure this thing hugged their face, now they're coming back and saying, 'Hey, I just want to be compliant so I can open up and be comfortable in my job.' "

Like so many of the coronavirus challenges, optimal face mask design is a moving target — and so the Smiths keep tinkering.