Accessibility links
Memories Unleashed By #MeToo Movement Are At The Center Of 'Bright Precious Thing' Like most good memoirs, Gail Caldwell's latest is a reassessment of life choices, roads taken and others foregone. "At some point you shuffle the cards and call the deck a life," she writes. 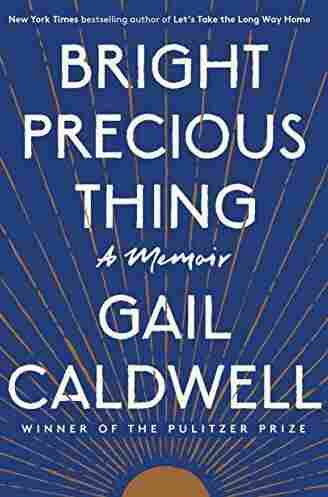 Gail Caldwell, the Pulitzer Prize-winning former book critic for the Boston Globe and author of the 2010 Let's Take the Long Way Home, a gorgeous elegy of a special friendship, has become what is known as a serial memoirist.

It's a term that smacks of crime or perhaps narcissism — but the most serious charge against Caldwell might be repetitiveness concerning her boundless love of dogs.

Reading Caldwell is like sitting down over tea and cookies with a close friend, only to realize several hours later that together you've devoured the whole plateful and dinnertime has come and gone. She clearly had a lot on her mind while writing Bright Precious Thing. This fourth memoir, while not as powerful as her paean to her lost soul mate, writer Caroline Knapp, is both timeless and timely. In addition to familiar themes of love and loss — of dear humans and devoted Samoyeds — it encompasses memories unleashed by the #MeToo movement of her own experiences of sexual assault and harassment.

Like most good memoirs, Bright Precious Thing is a reassessment of life choices, roads taken and others foregone. "At some point you shuffle the cards and call the deck a life," Caldwell comments with typical punch.

One ace in her hand was feminism in the early 1970s, which she believes saved her from both the potentially lethal "onslaught of sex, drugs, and rock and roll" and the "traditional paths of marriage and motherhood," which seemed "lethal in a whole other way." After an introverted childhood in the Texas Panhandle Bible Belt, Caldwell went through a period of wild risk-taking during her college years in Austin — which resulted in an illegal abortion across the Mexican border and several hitchhiking experiences that could have turned out even worse than they did. These brushes with catastrophe left her thankful "for the bright, precious thing that was my life." She writes, "The women's movement offered a scaffolding of sanity and self-respect, and a way to get a grip on everything that was scary about life."

The 2016 election and #MeToo movement brought back some of the scary stuff. She stops counting the many "macro-aggressions" she experienced — which don't include flashers — at around 20, which only takes her halfway through her life. There's a Famous Writer who makes an uncomfortable pass during an interview. There are lecherous professors and other women's husbands. "They're as common as bad traffic or the flu," she comments. The worst is a date rape by a nasty frat boy, about which she writes, "There were a dozen ways to walk away from the memory, and I used them all." Alcohol was one, and it eventually led to more than three decades of carefully maintained sobriety: "AA: for me, an institute of higher learning for the human heart," she writes.

A running account of visits from a neighbor's enchanting 5-year-old daughter, Tyler — who is enthralled by both the author and her big white dog — provides an upbeat throughline in this vaguely chronological narrative. Caldwell, who has never married or had children, happily submits to genie training, and comments, "Now I understand how parents find themselves in bouncy castles."

But underneath the play-acting and whimsical conversations, there's a more serious element. The little "brown girl daydreaming on my porch in Cambridge" often asks Caldwell piercing questions — like why she is single. "In her mind I am living life as a giant child, or a wrinkled teenager, or some perfect mix of freedom and pleasure," the author writes. For her part, Caldwell gingerly tries to convey protective life lessons to prepare Tyler for the harsher realities of the world she'll need to cope with as she grows up. Of course she omits plenty, and "the most important thing I do not tell her, not yet, is that the mistakes, if you're lucky, can become tributaries to somewhere else."

Like her previous memoirs, this book is filled with quotable words of wisdom. "Part of aging is the rue and reach of the past," Caldwell writes. She considers her path to a home with "dogs and an open-door policy but no full-time humans," and comments, "the heart is a dowsing tool and finds where it needs to go."

Unfortunately, Bright Precious Thing loses steam partway through. Some of Caldwell's epiphanies feel less than fresh: "I've learned that you must love what is in front of you, rather than only what is behind, or you will go mad from sorrow on the journey," she writes. "Drink from the fountain as often as you can," she adds. "Doesn't have to be the Trevi."

But what Caldwell's dowsing tool has found is a life filled with intense friendships, pleasurable exercise (swimming, rowing, walking), a succession of Samoyeds, and a fulfilling second career as a memoirist. Of course there are inevitable losses — friends and dogs die, "genies grow up and disappear." You have to learn to accept "death not as an enemy, but as a natural end of the story," she reminds us. Or as the subject of another story, another book.