Accessibility links
20 Years Of The White Stripes' 'De Stijl,' An Album Made For No One Jack and Meg's 2000 album De Stijl is the kind of art you make for yourself, assured few will hear it. It was the last time they'd have that luxury, but they never forgot the lesson.

20 Years Ago, The White Stripes Made An Album For No One

20 Years Ago, The White Stripes Made An Album For No One 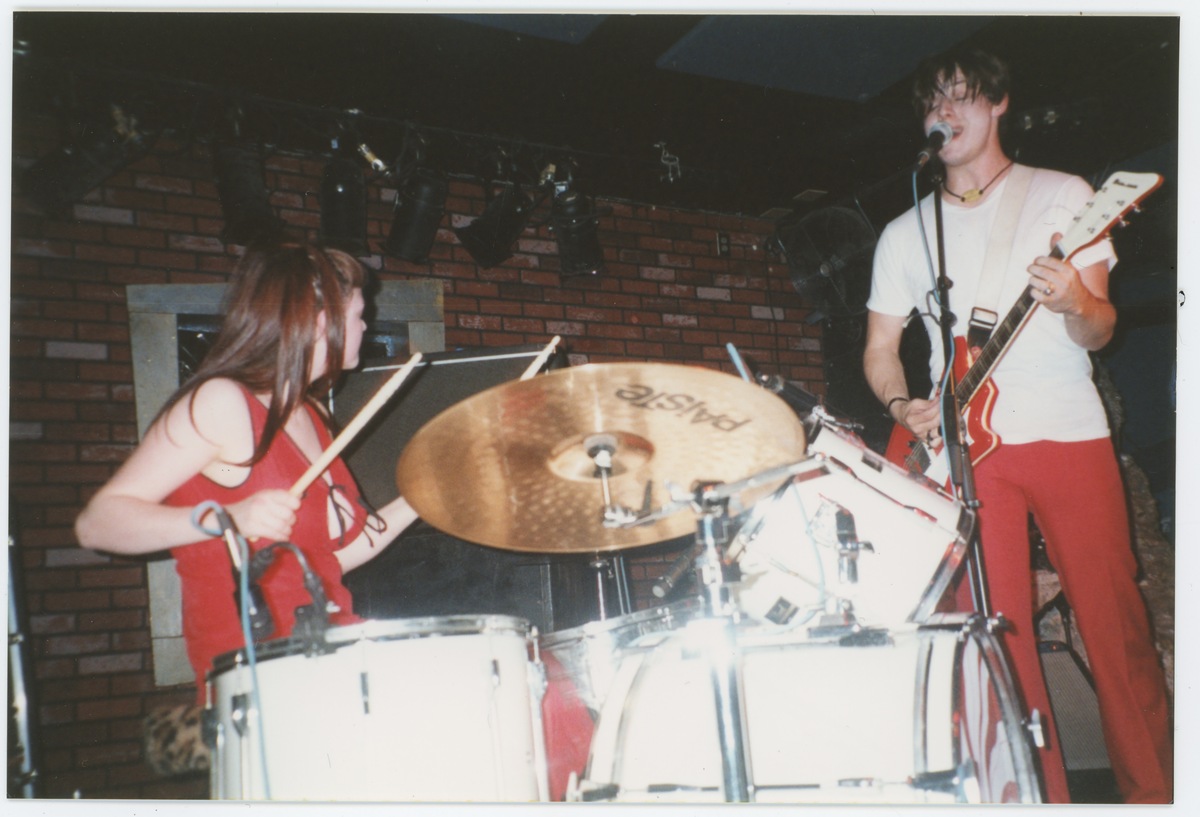 Twenty years ago, life was hard for a rock fan. On the radio, corporate pop and slick R&B reigned. Justin, Britney and Christina were rising, straight from Mickey Mouse Club finishing school, trained to give red carpet quotes to Carson Daly on TRL. Grunge had been reduced to a lifestyle concept, used to sell Smashing Pumpkins t-shirts and cheap flannels at Hot Topics in malls across America. Spin magazine had Mark McGrath and Matchbox 20 on the cover. Pitchfork barely existed, still just some online thing a dude from Chicago ran out of his bedroom. Hip-hop, then the mainstream's most reliable source of sonic dissent, felt temporarily and uncharacteristically out of focus, hungover from the East vs. West Coast drama. Those in the record industry looking for fresh torchbearers of punk-rock ideology were betting on electronic music as the next sound of rebellion.

This isn't to say there wasn't incredible music happening. A mixtape of 2000's best singles would be packed with classics: "Ms. Jackson" by Outkast, "Try Again" by Aaliyah, "Big Pimpin' " by Jay-Z and UGK, "Party Up (Up in Here)" by DMX, "Say My Name" and "Jumpin' Jumpin' " among a stream of pristine bangers from Destiny's Child, plus the perfect pop appeal of nascent Britney in "Oops!... I Did It Again" and Christina in "What a Girl Wants." Music sounded the way the era felt, clean and big and air-conditioned like a Bond movie on a July afternoon, a distillation of the highest-grade pop culture product at the end of the era that invented it, the apex of 20th century ideas of celebrity and stardom funneled into that one Britney Spears VMA performance with the snake.

But if you felt sad or angry or weird, or simply in the mood to hear a song with live guitar that clocked in under three minutes, you were out of luck, and it seemed you would be for a while. As long as kids were lining up at Virgin Megastores on release day to pay 20 bucks for a CD with one big single on it, the industry had no reason to reevaluate. The year 2000 remains one of the most lucrative in music industry history. The star-making machinery appeared to be working as well as it ever had.

That summer, as Enrique Iglesias' "Be With You" climbed to No. 1, a 25-year-old upholsterer named Jack and the woman he called his sister, but who was actually his ex-wife Meg, released their second album as The White Stripes. The 14-song collection ran just under a dizzying 37 minutes, and sounded like it had been played through amps full of razor blades. The opening track, "You're Pretty Good Looking (For a Girl)," is 95 seconds of gleefully childish rave-up noise, recorded, like the rest of the album, in Jack White's red-and-white Detroit living room. The album's first and only official single was the gnashing "Hello Operator," which has no real chorus and features a string of quirky, surrealist lyrics like "Carry my obituary / My coffin doesn't have a phone," while the B-side was a deliciously melodramatic cover of Dolly Parton's "Jolene." Jack produced the record himself, and the band put it out on the niche West Coast indie Sympathy for the Record Industry. They titled it De Stijl, after the obscure-ish midcentury Dutch art movement devoted to the pleasures of austerity.

De Stijl was the kind of art you make for yourself, assured almost no one else will ever hear it. You make it because you want to. You made it because you have to. You make it expecting next to nothing, materially, in return. And yet the album became a bellwether of what was to come, a dispatch from a future so unlikely The White Stripes didn't even realize they were representing it.

Within a year, The Strokes would release the EP The Modern Age and begin a now-legendary residency at Manhattan's Mercury Lounge. But that summer, as Jack White worried about the financial risk of giving up his upholstery business in order to tour, Julian Casablancas was still bartending and going to Mooney Suzuki shows with his bandmates, wondering if The Strokes would ever be that good. Yeah Yeah Yeahs would soon play their first show ever, opening for The White Stripes at the Mercury in the fall of 2000. But when Jack and Meg were recording De Stijl, Karen O had only recently transferred to NYU from Oberlin, and had just met Nick Zinner, a fellow regular at the magical East Village dive Mars Bar. Interpol, who had been toiling away in obscurity for two years, would release its debut EP that winter, then watch as label after label turned the band down. James Murphy would soon go see The Rapture at Brownies on Avenue A, and in time decide that that band and the label he'd form around it, DFA Records, were destined to rescue New York City from its then status as a dull, anti-rock town full of finance bros and bottle-service clubs. But when De Stijl came out, Murphy was feeling washed up at 32, having given up on his own aspirations as a frontman.

Some of the so-called rock revival's bands would share explicit musical influences with The White Stripes, but most would not. And there were other artists making great guitar records at the same time — Queens of the Stone Age, PJ Harvey, and, of course, Radiohead — who weren't woven into the same storyline. Some critics have theorized that the whole rock-revolution movement was a fabrication, a scene manufactured by bored NME editors who wanted something to write about other than Travis. If these bands — The Strokes, Interpol, The White Stripes, Yeah Yeah Yeahs, and later The Killers, Kings of Leon, Franz Ferdinand, The Libertines et al — didn't really sound alike or know each other well, what actually united them?

Youth, sex and rage for certain. But as importantly, timing and circumstance. Scene-building is partially about literal shared geography, but it's also about audiences in search of a narrative. What these artists truly had in common was a sense of connection to the visceral, analog, IRL aesthetic of punk rock, and the frustration (and secret good fortune) of making really good music you are told no one will ever care about. They each advertised their own outsiderness, and that outsiderness is what Jack White would have called a useful limitation. "The whole idea of The White Stripes was to break away the excess," White said recently, reflecting on De Stijl's 20th anniversary. "To get down to the nitty gritty of what music meant to me and my sister." As he has put it, "It was mind blowing to think that people [would ever be] interested in this music." Jack and Meg White on the set of the De Stijl cover shoot. EWolf/Courtesy of the artist hide caption

toggle caption
EWolf/Courtesy of the artist Jack and Meg White on the set of the De Stijl cover shoot.

Friends from back home in Detroit remember Jack's early irritation at being written off as a novelty act, two white kids dressed like peppermints playing camp blues. "It was tough for them at first," Bobby Harlow from The Go recalled in an oral history. "People saw it as half a band." On the other hand, during that first show with Yeah Yeah Yeahs, Nick Zinner remembers Jack being bummed that there was another band without a bass player on the bill. It's hard to build your own obscure world and live in it when no one cares. But when you double down on that world, and on your commitment to the rules that you alone get to make for it, you become free.

De Stijl represents The White Stripes at the peak of their camp interiority. More than any of their eventual peers, the duo's aesthetic was forged in darkness. In Detroit they were mocked, then beloved, then rejected for being too big, all before they had anything like real fame. They emerged out of that small-time Behind the Music cycle intact, fortified, extra-committed to the ideals that brought them there. The same band that stormed MTV a year later with White Blood Cells also had the necessary confidence in the power of its own strangeness to build a music video out of Legos for its hit single. The same band that wrote "Seven Nation Army," a song that will play at sports stadiums forever, chose to record it at one of the last truly analog studios in the world.

Two decades on, De Stijl stands for something lost to the past. It's an artifact of an era when musicians of any kind — but especially those whose work stood outside of the obvious mainstream — had so little hope of being heard, so few ways of generating an audience, that they had no choice but to make the music they themselves wanted to hear in the world. Jack and Meg evolved after 2000, but they never grew up: On record they are, always and forever, the scrappy underdogs obsessed with primary colors and Son House. They never got comfortable. They never relaxed. They never fit in. And then in 2011 they broke up, leaving us all, including themselves, wanting more.

"I'd make a White Stripes record right now," Jack famously said the following year, while promoting his debut solo album. "I'd be in The White Stripes for the rest of my life. That band is the most challenging, important, fulfilling thing ever to happen to me. I wish it was still here. It's something I really, really miss."

Lizzy Goodman is a freelance writer and the author of the book Meet Me in the Bathroom, a history of the New York City rock scene at the turn of the 21st century.