Accessibility links
New Mexico Leaders To Militia: If You Want To Help Community, Stop Showing Up Armed Armed militias have become a feature at anti-quarantine protests, racial justice marches and monument removals. But after a shooting in Albuquerque, locals say militias are disturbing the peace. 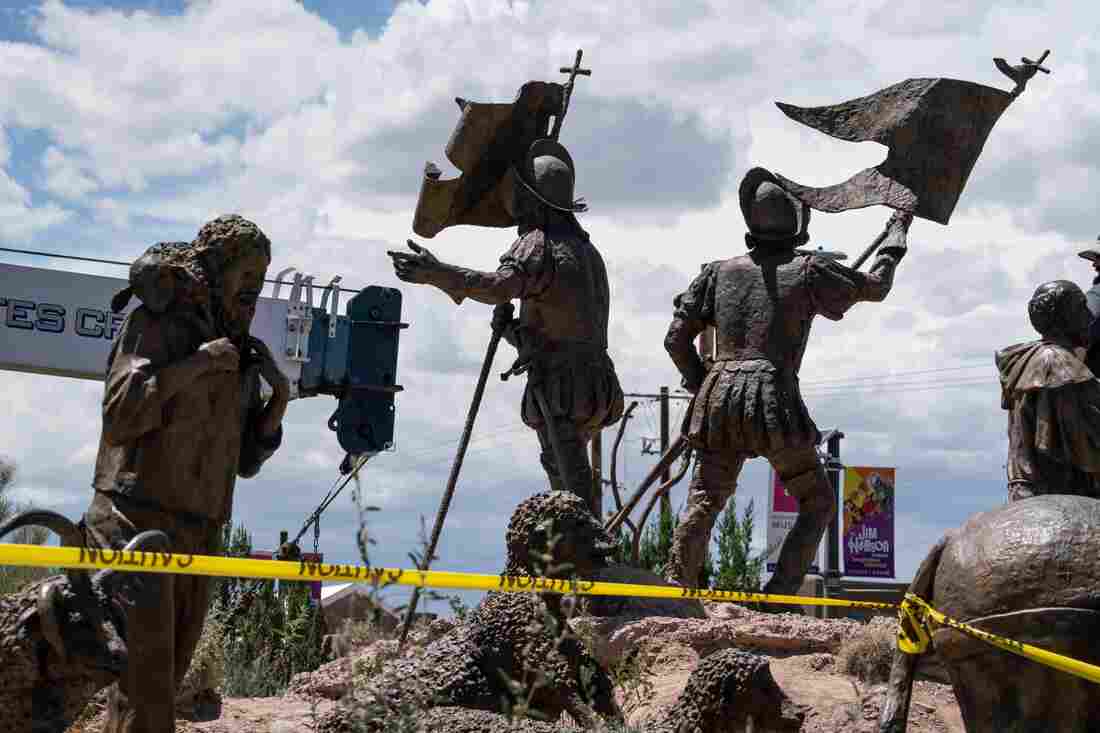 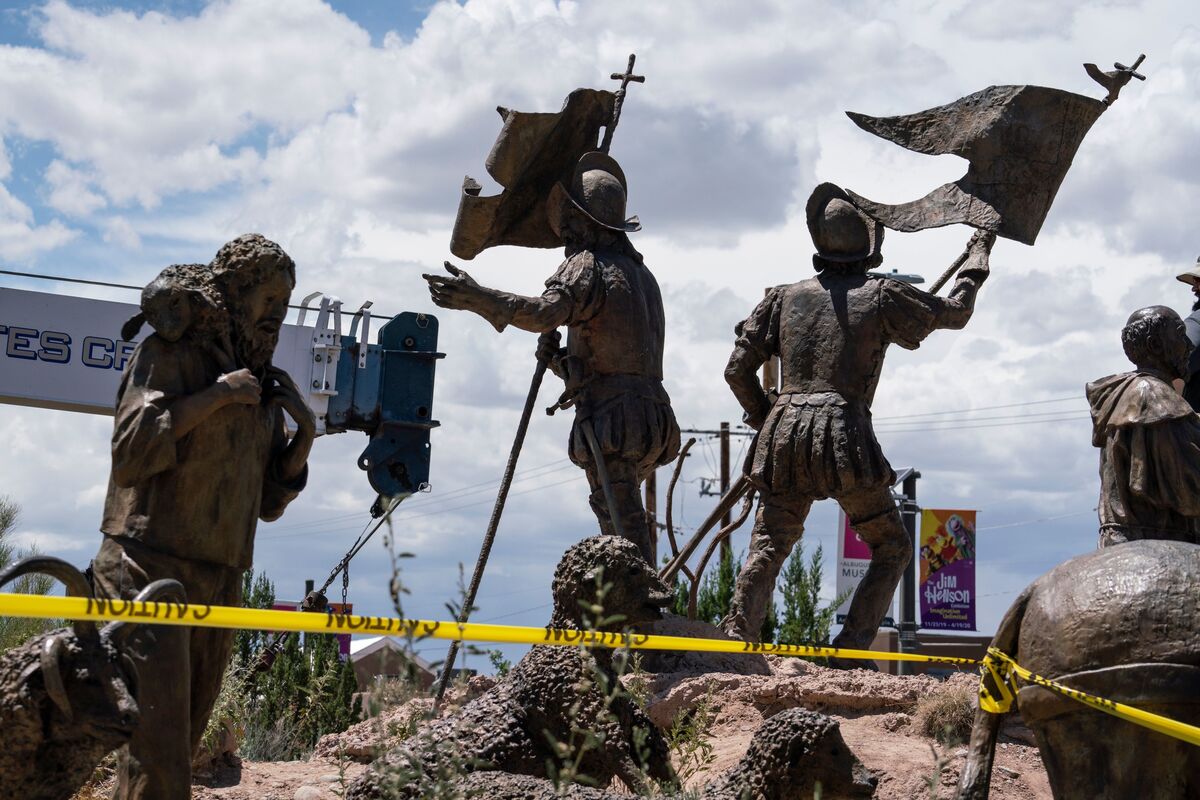 A sculpture of Juan de Oñate's settlers arriving in New Mexico is pictured as city workers remove a sculpture of the Spanish conquistador on June 16 in Albuquerque.

It's become known as the Old Town melee. Protesters gathered last month in Albuquerque, N.M., around the bronze statue of Juan de Oñate, the controversial Spanish conquistador, in the city's historic quarter.

Videos of the event show men with guns — in military garb and tactical gear — stationed around the statue, tussling with protesters. Soon, the protesters bring out a chain and pickax to topple the figure, as police watch from afar.

Minutes later, four shots ring out, and the crowd flees in panic. A protester wearing a black hoodie is hit and seriously injured. A man in a blue shirt — who appeared to be trying to protect the statue — drops a handgun. The militia surrounds him.

Armed militias like this one have become a feature of the social unrest that is roiling many American cities. They show up at anti-quarantine protests, marches for racial justice and monument removals. Following the shooting in Albuquerque, the community is accusing a militia of disturbing the peace, not keeping it.

After that shooting, police arrested Steven Baca, a conservative, onetime city council candidate. He has been charged with three counts of battery for assaulting three female protesters and unlawfully carrying a concealed handgun. Protesters say it was Baca who started the trouble; Baca's lawyer says he fired in self defense at a young man swinging a skateboard at him. The shooting is still being investigated. After the incident, the city of Albuquerque banned firearms and other deadly weapons in public parks.

The militia said Baca is not one of them and that they surrounded him for his own safety until police officers arrived on the scene. Nevertheless, police detained and questioned them for three hours, and confiscated 13 guns and 34 ammunition magazines. They were released without charges.

Today an angry community is asking why the police didn't intervene sooner, and why a ragtag group of gun lovers who call themselves the New Mexico Civil Guard was there in the first place.

A Person Shot During The Protest To Remove Conquistador Statue In Albuquerque, N.M.

A Person Shot During The Protest To Remove Conquistador Statue In Albuquerque, N.M.

"Our reasons for being down there with guns was to, 1. Be a visual deterrent; 2. It's our Second Amendment right to open-carry in this state; and 3. We just want to prevent any violence from spilling out from that protest," said the group's local commander, John Curtis Burks. He's 33, wears a military cap and says he works private security.

In hindsight, Burks said, their seven guys were not prepared for 300 angry protesters. "We seriously underestimated the situation that we had stepped into. We thought it was going to be maybe 15, 20 people trying to tear the statue down," he said.

Rather than acting as a deterrent to violence, observers say the presence of the militia shouldering their assault-style rifles had the effect of escalating the mayhem.

"When I saw the armed militia there, I knew immediately that somebody was going to get hurt," said Moises Gonzales, a professor of urban design at the University of New Mexico, who describes himself as a Chicano Native American rights activist.H e had organized the event as a prayer gathering. 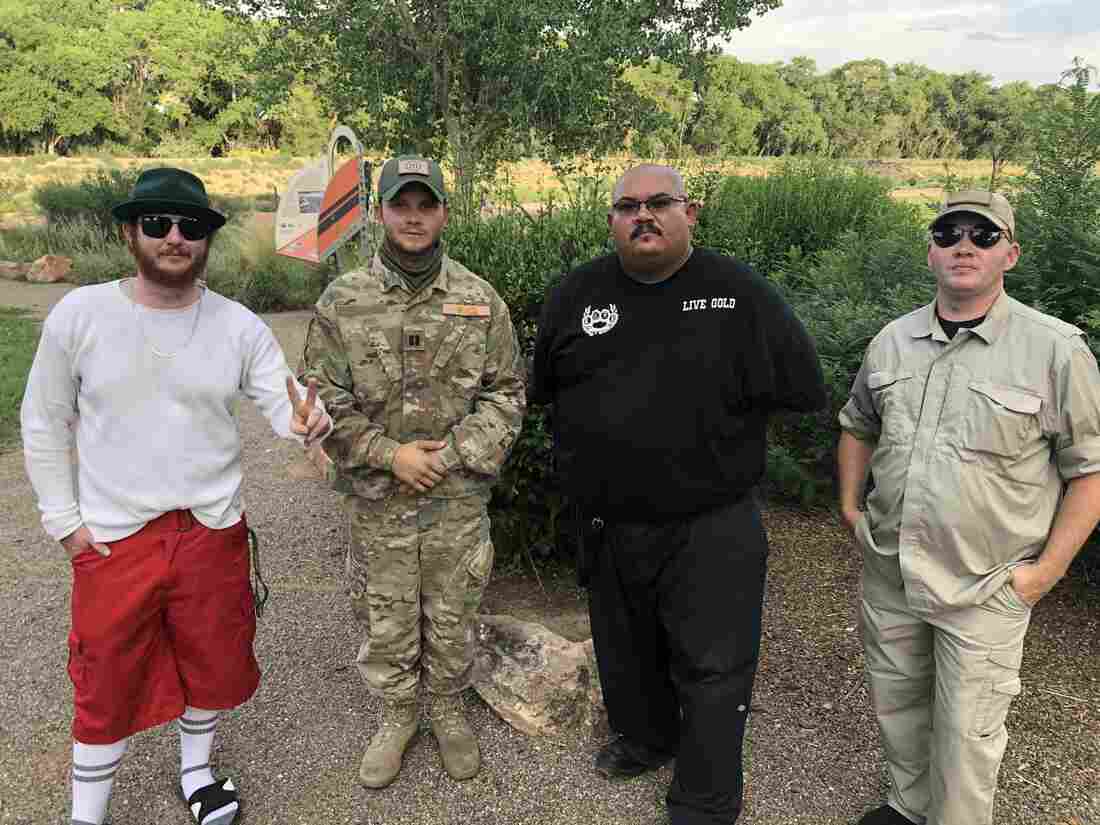 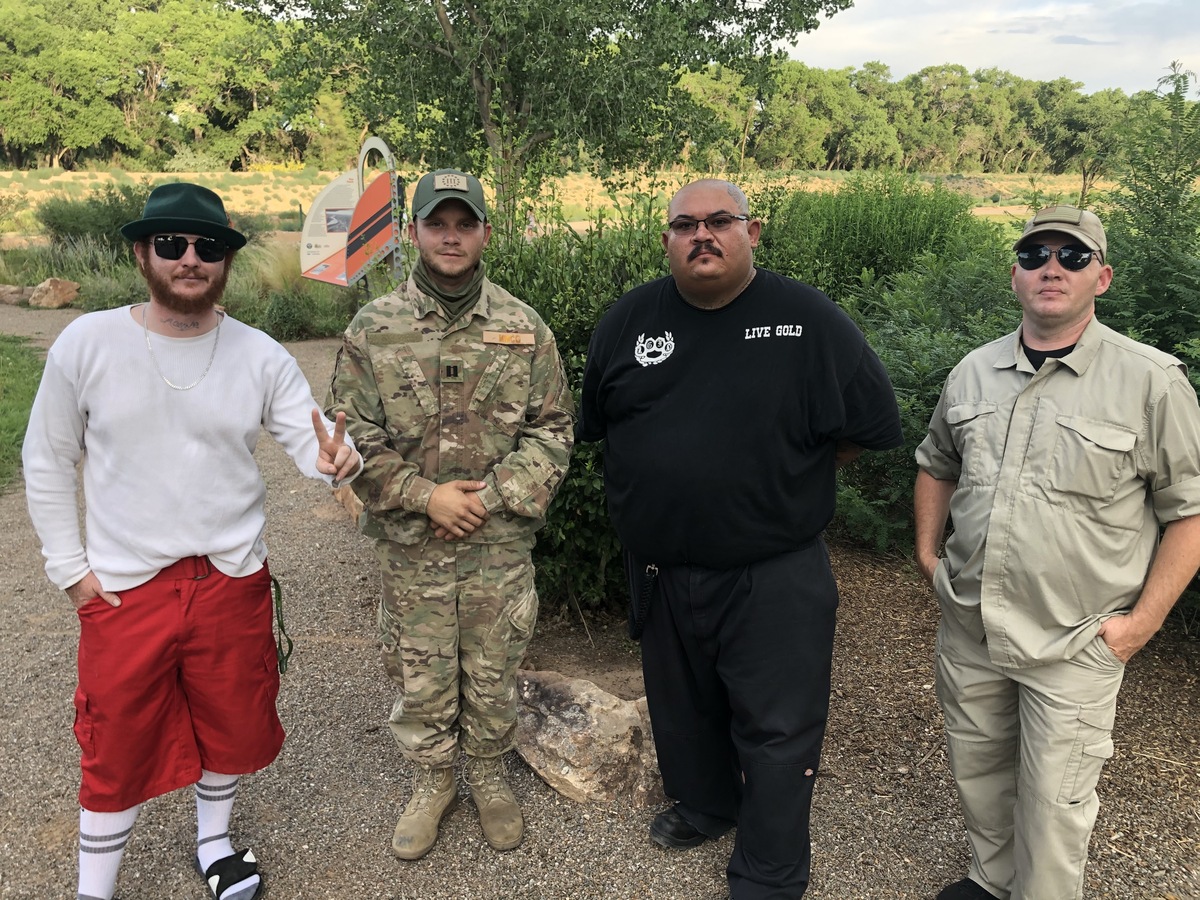 New Mexico Gov. Michelle Lujan Grisham said the militiamen had one reason for being there: "to menace protesters." And, she said, there is no place for a group "seeking to terrorize" her citizens.

For his part, Albuquerque Mayor Tim Keller told the militia to stay away.

"We're just trying to send a clear signal that we never want vigilantes in our town. We never want firearms at protests," Keller said in an interview at City Hall. "And both of those things ... have been a dangerous combination for our community that we don't want to see."

Four members of the Civil Guard recently agreed to an interview around a picnic table in a public park south of Albuquerque, where the sun slanted through the cottonwoods and runners huffed past. They were unarmed and unmasked, except for a young medic named Dakota Farris with a sidearm who said he was there for security.

"We get death threats all the time," Burks said.

Because of the fallout over the violent statue protest, Burks said the group is considering changing tactics, carrying pepper spray instead of weapons. "When it comes to a protest," he said, "we're going to be going out and trying to provide a lesser threatening posture."

The New Mexico Civil Guard claims 120 members in 12 counties around the state. Its Facebook page describes its mission this way: "to provide rapid, local, lawful response to emergency and dangerous situations." 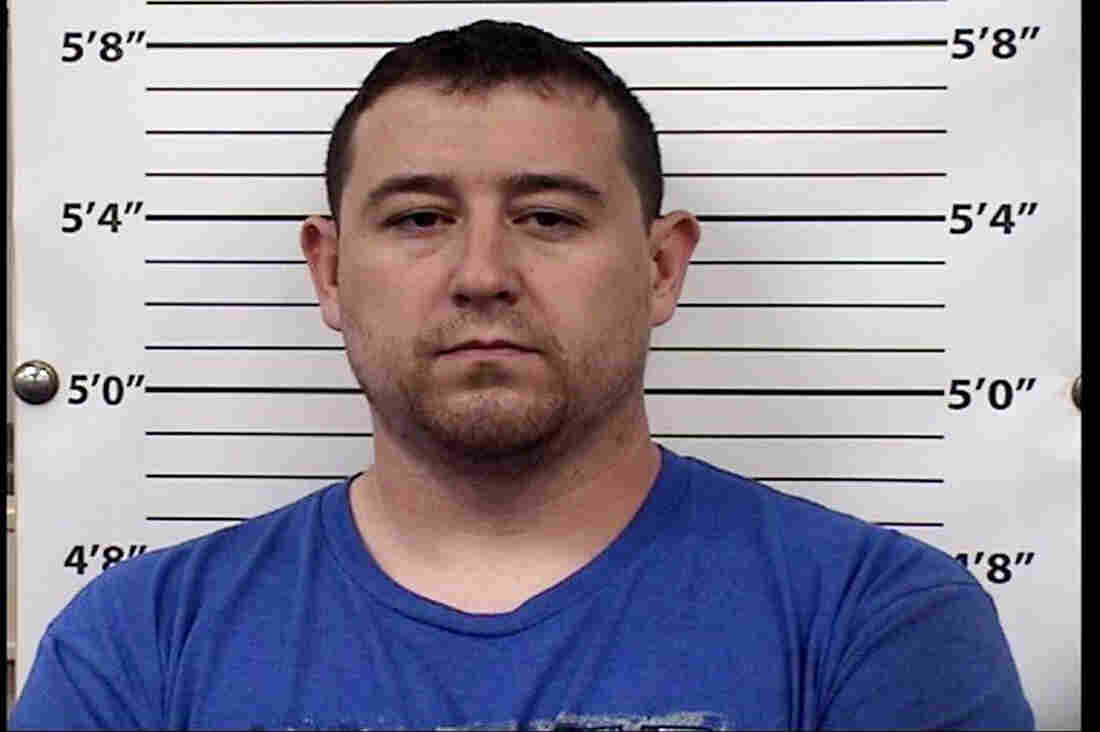 A New Mexico judge ruled on June 22 that Steven Baca, who was arrested during a confrontation with protesters over the removal of a statue of a Spanish conquistador, will be released pending trial on charges of aggravated battery and unlawful carrying of a handgun. Bernalillo County Sheriff's Office via AP hide caption 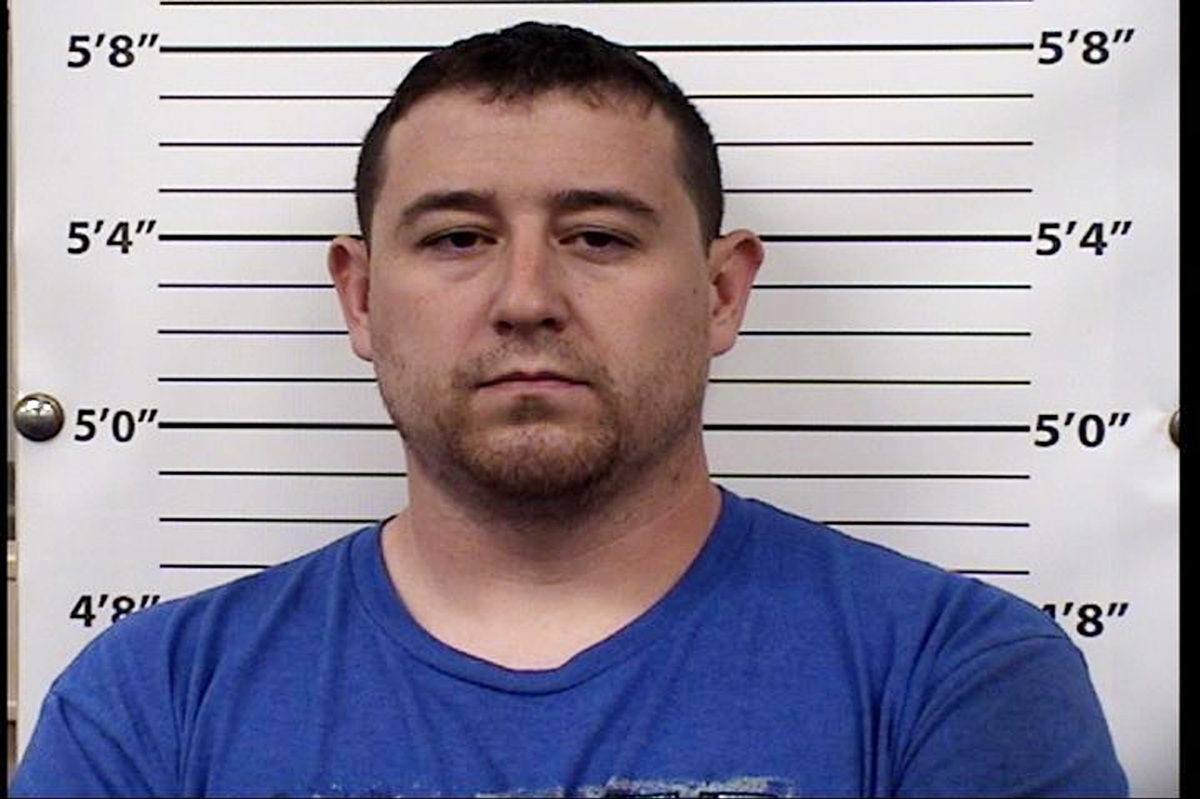 A New Mexico judge ruled on June 22 that Steven Baca, who was arrested during a confrontation with protesters over the removal of a statue of a Spanish conquistador, will be released pending trial on charges of aggravated battery and unlawful carrying of a handgun.

'I am not a white nationalist'

But the mayor has called on the FBI to investigate the militia as a hate group. An FBI spokesman in Albuquerque would not confirm whether the Civil Guard is under investigation.

"Our efforts are focused on identifying, investigating, and disrupting individuals that are inciting violence and engaging in criminal activity," the FBI said in an email.

The New Mexico Civil Guard insists they're not haters or white supremacists. As proof, they introduce the newest militiaman, Walter Rodriguez, a Hispanic private prison guard from Grants, N.M.

"I wanted to serve in the military, but due to the fact of certain health issues, no way I could get involved. So when I saw this come up, I thought this is the closest I'm gonna get," he said.

The group's co-founder and chaplain is a 30-year-old framing carpenter with a red beard and tattoos named Bryce Provance.

Critics accuse him of being a racist. They have posted photos of Provance dressed as a rebel soldier, posing in front of the Confederate battle flag. And he was listed as a state commander on the website of the New Confederate States of America.

"I am not a white nationalist," Provance said, "but I did like their slogan of Heritage, Not Hate."

Unlike the rest of the squad, he does not carry loaded weapons to demonstrations. He can't. He is a convicted felon with a long criminal record in Washington state that includes burglary, armed robbery and prison time.

"You know, I did stupid things. I've lost a lot of my life," he said tearfully. He described a turbulent childhood during which he was addicted to cocaine by age 13. He said he formed the militia as a kind of restitution to society, and "to help our sheriffs."

"I tried to make this so that we could do something good," he said. "This is what I do to pay for the things I did to my community."

But New Mexico leaders say if the militia truly wants to help its community, then it should stop coming to public gatherings armed to the teeth.