Accessibility links
Federal Prosecutors Discussed 'Burying' Evidence In Troubled New York Case The government acknowledged problems with sharing evidence with the defense, but prosecutors argue the missteps were inadvertent, not malicious. A judge is assessing the matter. The historic Thurgood Marshal U.S. Courthouse building, right, in New York City. A judge is assessing a case there after prosecutors admitted missteps, although they said with no malice intended. Mary Altaffer/AP hide caption 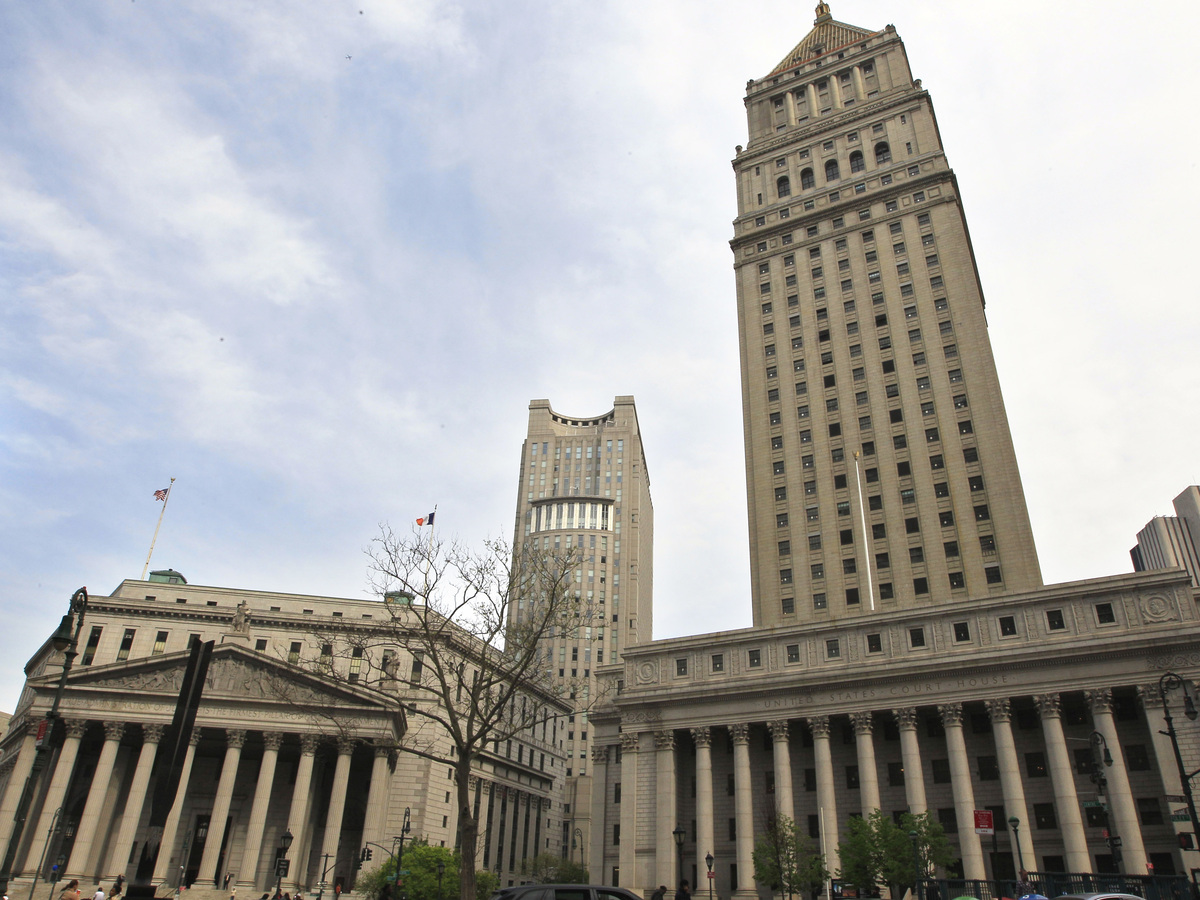 The historic Thurgood Marshal U.S. Courthouse building, right, in New York City. A judge is assessing a case there after prosecutors admitted missteps, although they said with no malice intended.

Federal prosecutors under scrutiny for failing to turn over favorable evidence to a defendant told a judge they didn't act in bad faith, even as they disclosed internal emails in which they discussed whether they might try to "bury" a document they were giving to defense lawyers in a stack of other papers.

Prosecutors in the Manhattan U.S. Attorney's Office made the disclosure in a letter to Judge Alison Nathan, who had demanded answers about the prosecution's failings and whether she had the power to impose sanctions against them.

The newly revealed email message described how one of the prosecutors found out that an important document hadn't been turned over to the defense, suggesting: "I'm wondering if we should wait until tomorrow and bury it in some other documents."

Prosecutors now say the document was not, in fact, "buried" because they turned it over less than 24 hours after the email discussion.

Their July 2 letter said the prosecutor who wrote the email was "endlessly chagrined about this chat" and added that "we believe it would go too far to condemn her for a Friday night lapse in thinking regarding a document that was in fact disclosed Saturday afternoon."

Defense lawyers for Ali Sadr Hashemi Nejad, who was charged with violating American sanctions laws against Iran, told the court they are "surprised and disappointed."

Attorney Brian Heberlig accused the prosecutors, and an official in the U.S. attorney's office who's tasked with promoting professional responsibility, of trying "to minimize, deflect, and deny, avoiding any acknowledgment or acceptance of responsibility for the government's obvious, repeated failures and its notable lack of candor," in his own letter to the court.

Squabbles over turning over documents, known as discovery, are common in federal criminal cases. But it's rare for a judge to demand that the government identify lawyers and supervisors involved in evidence-sharing lapses.

And it's even more rare for prosecutors to acknowledge such serious faults that they moved to dismiss a case they had already won.

"Any new trial would necessarily require a new team of (assistant U.S. attorneys) who would have to become familiar with every aspect of the investigation — not an easy task, particularly in a case that has already suffered from multiple breakdowns in communication that contributed to significant disclosure failures," prosecutors wrote to explain their rationale for abandoning the conviction.

Aside from the discussion of whether to "bury" a government exhibit, Sadr's lawyers said the prosecution team had engaged in even more "egregious wrongdoing" by misrepresenting a search of emails before the March 2020 trial began.

The entire case started with an investigation by the Manhattan District Attorney, who subpoenaed Sadr's emails as part of a state-run probe. Later, the D.A.'s office passed them to the FBI.

Federal agents then apparently used the messages to interview crucial witnesses in the investigation, and federal prosecutors ultimately pursued the case. But those prosecutors zealously defended the D.A.'s handling of the emails in a hearing about whether the messages should be suppressed, before the trial began.

"Had the government told the truth about these matters, the court would have suppressed the entire search warrant returns and Sadr's trial would have been avoided," Sadr's lawyer, Heberlig, wrote.

Perhaps in an attempt to stave off independent investigations of their conduct, prosecutors told the judge they are investigating their mistakes and holding a refresher course on evidence-sharing obligations.

At bottom, they said: "We do not believe that any information was improperly withheld from the defense, in the sense of knowing that it had to be disclosed yet not disclosing it. But many items were discovered or disclosed far too late."

On Monday, the office of Acting U.S. Attorney Audrey Strauss wrote the judge again, to clarify some parts of its earlier letter that it said had been drafting errors. The prosecutors told the judge they were not shirking accountability and that they had been looking into flaws in their handling of the case before the judge demanded answers.

"Our conclusion that there was not bad faith does not end the inquiry; rather, it puts the focus on the specifics of the mistakes here, with the additional recognition that they could recur in another case, and our responsibility to ensure that that does not happen," the government team wrote.