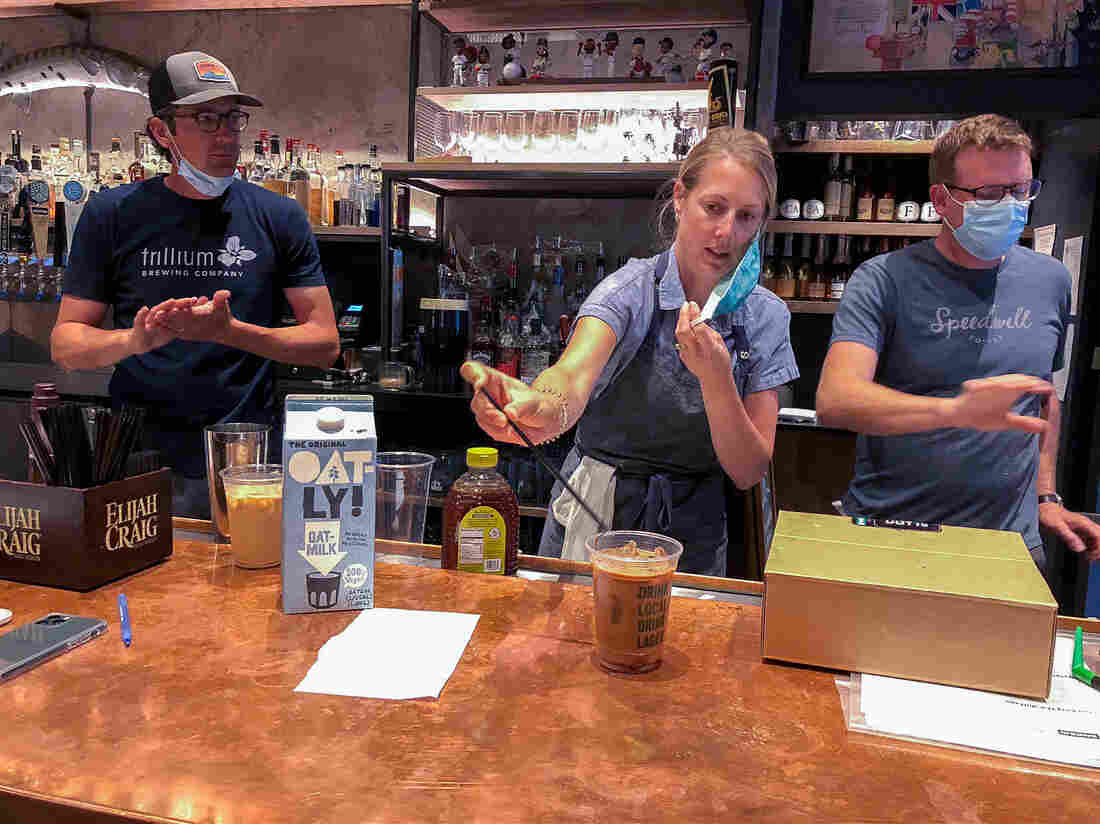 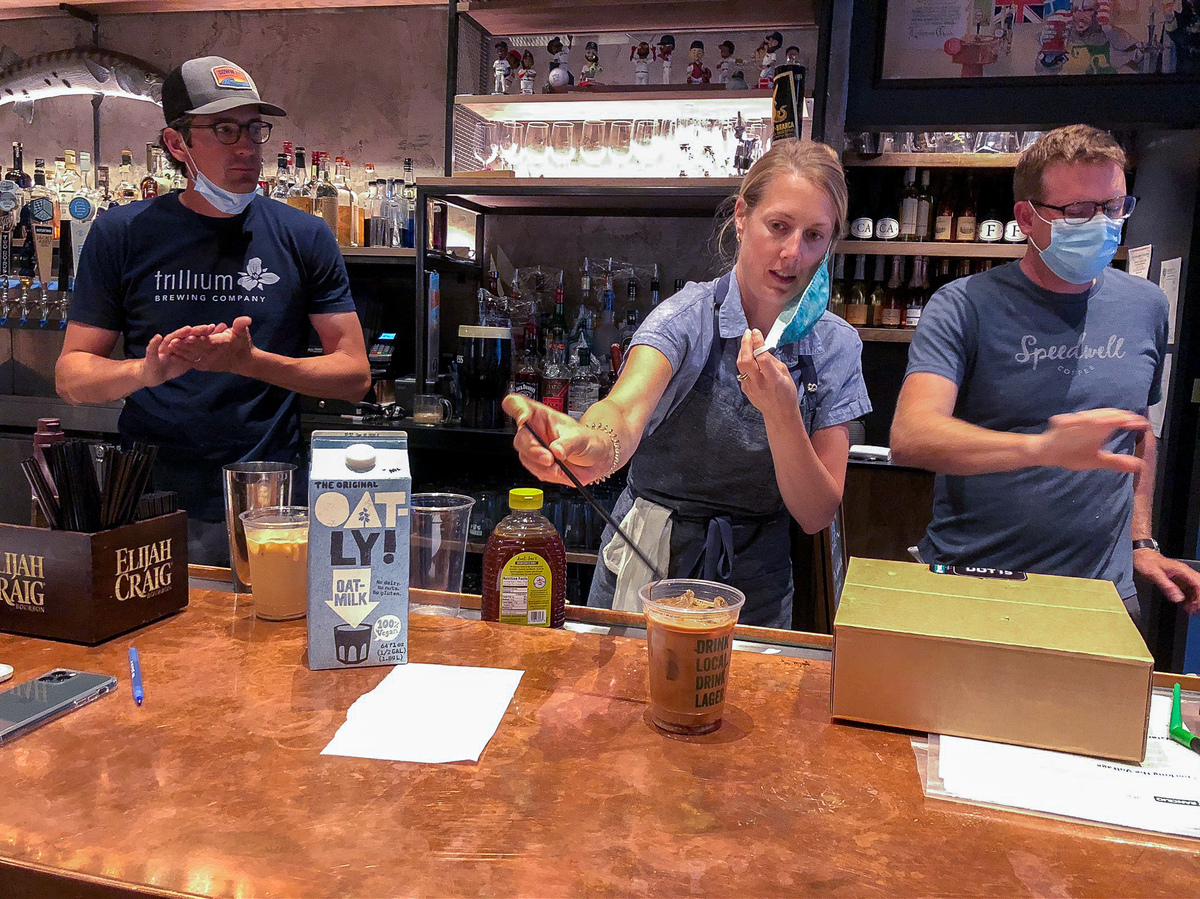 This is the first in an ongoing series of stories following the struggle of one restaurant trying, like many, to reinvent itself to survive the global pandemic.

Food and drink establishments have been among the most challenging businesses to operate through the pandemic. Around the nation, many have already shut down for good, while others that reopened are now closing again because of increases in COVID-19 cases in some places.

In Boston, where the coronavirus is currently on the wane, an English-style pub called Cornwall's is one of many trying to make a go of it. A mainstay in Kenmore Square for nearly 40 years, Cornwall's has capitalized on the foot traffic from neighboring Fenway Park and Boston University.

As it does every year, the family-owned pub spent mid-March preparing to be packed with people looking for a place to party.

"Saint Patrick's Day is like Christmas," says Pam Beale, 64, who owns the place with her husband, John, 77. The cozy pub, with its mahogany banquettes with tartan-plaid cushions, was decked out for the holiday with shamrocks adorning the walls and Guinness giveaway keychains and hats piled up for revelers. The Beales say they'd prepared to cook "lots and lots" of corned beef and cabbage and soda bread and had ordered extra kegs and bottles of beer. 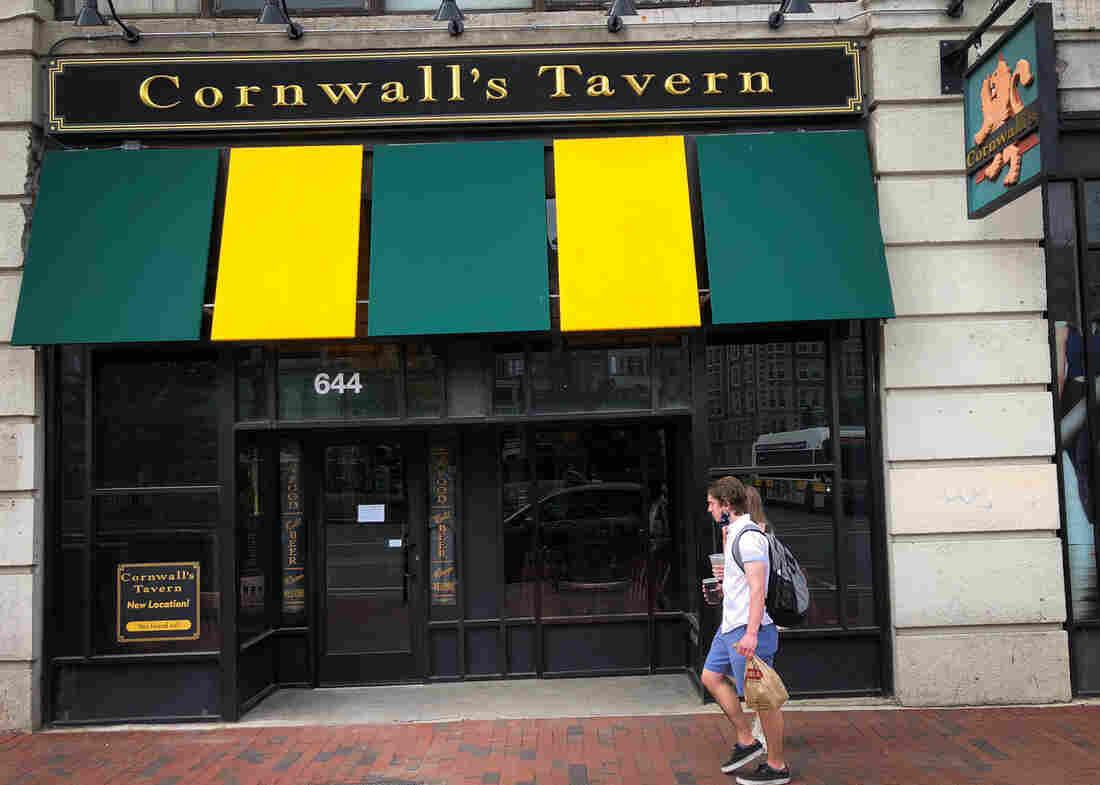 "People would start at lunchtime," says Pam. "It was a big celebration to look forward to."

Then the state ordered all restaurants to close by 11 p.m. the night before.

The Beales raced to pack up their perishables and put away the decorations. Their regulars came in for a last pint and left extra-large tips as they wished everyone well.

"It was gut-wrenching," she recalls. "It really was."

The owners locked their doors for what they thought would be three weeks, but turned out to be three months.

Last month, on his first day back at the pub, J.R. Moran fiddled with his key ring at the door.

"I can't even remember which key it is," he says.

Moran and his brother Billy, the Beales' nephews, have been working at Cornwall's since they were teenagers. They are now chef and general manager, respectively.

They've come to get rid of food gone bad, equipment that lay idle for too long and won't work anymore and beer that's gone stale. Vinny Gibson from Burke Distributing, the guy who has been getting them kegs for more than a decade, is here to take a bunch back. 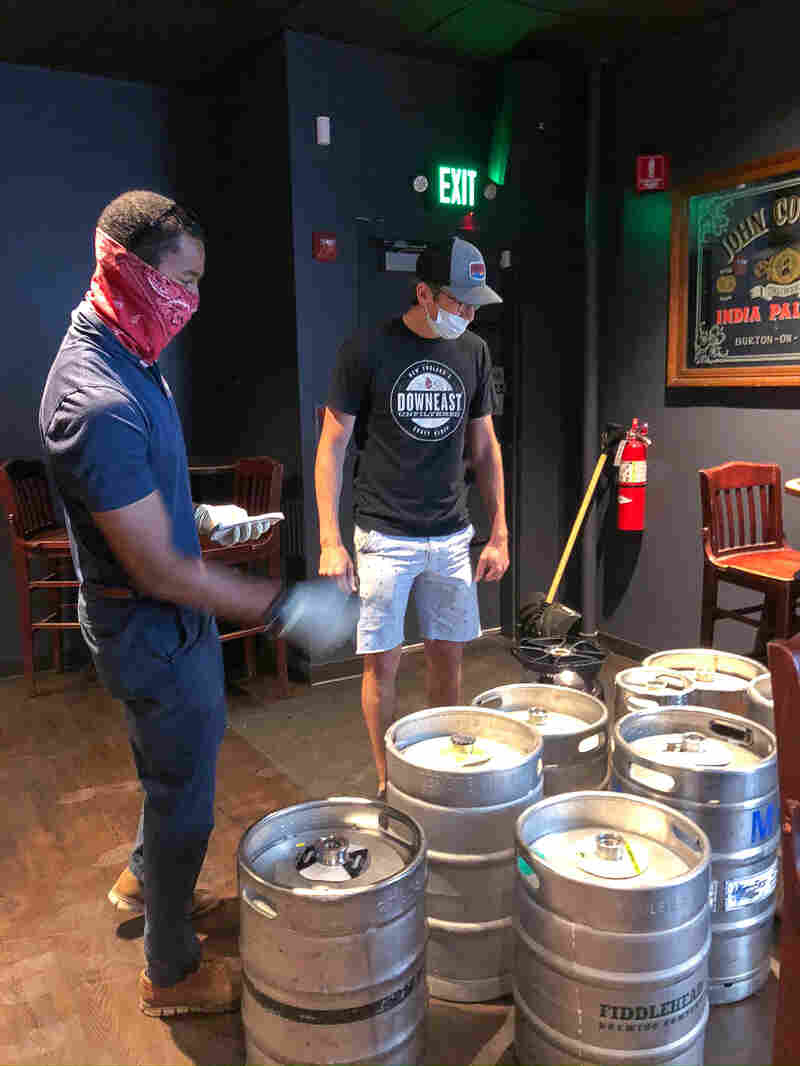 Vinny Gibson of Burke Distributing counts up kegs that Cornwall's is returning. The pub bought the beer in March, when it expected big crowds for Saint Patrick's Day, but the kegs have been gathering dust and the beer has gone flat since the pub closed because of the coronavirus. Tovia Smith/NPR hide caption

"You're getting credit for everything," he says. "Anything untapped is full credit. Anything partial, we just weigh it, give you partial credit."

It's a more-than-generous gesture in an industry where everyone's hurting and a small bit of welcome relief to the family business that has flatlined for three months.

"Fingers crossed for all of us," an appreciative Pam says to Vinny. "I mean, your business depends on my business, and vice versa."

But the big question on all the Beales' minds is whether their landlord will be as understanding. The neighborhood is dotted with places that have already succumbed to the pressure of paying Boston's high rents. Even the owner of the highly successful Eastern Standard Kitchen & Drinks across the street said he may have to close because his landlord is playing hardball. The thought that if it can happen to him, it can happen to anyone leaves them all rattled.

So far, Cornwall's landlord has been willing to cut the pub some slack. But as Billy says, everyone's patience has a limit, and it's unclear if it will be enough.

"They've been really great so far," says Billy. "But this is a real test for any relationship. And that make me nervous because the opportunity for us to do really well probably won't come until next spring."

That's high season for Cornwall's. After Saint Patrick's Day, the pub counts on crowds from the Boston Marathon that runs through Kenmore Square, and then Cornwall's dual mainstays: the throngs of fans coming to Red Sox games at nearby Fenway Park and families flocking in to celebrate Boston University graduations.

Fenway has just reopened for practice, and games are scheduled to be played later this month, but with no fans. BU's current plan is to give students the choice of coming back for fall classes or taking them remotely, but the campus has been virtually empty since March.

"I mean, those are two legs of the bar stool that are totally gone," says Billy. Kenmore Square, he says, has been a "ghost town."

Especially, she said, since the stakes are not just her family's livelihood, but life and death for everyone who comes in to eat or work. While Massachusetts currently has one of the nation's lowest coronavirus transmission rates, it was a hot spot just a few months ago, and a second spike is always a fear. It's why she didn't just fling the doors open the first day it was allowed, like many others did.

Cornwall's let a month's worth of business pass it by as the Beales spent time studying new pandemic protocols, stocking up on PPE, attending webinars offered by the city and the restaurant industry, doing deep cleaning of the restaurant, and taking extra precautions like adding new filters to their HVAC system. 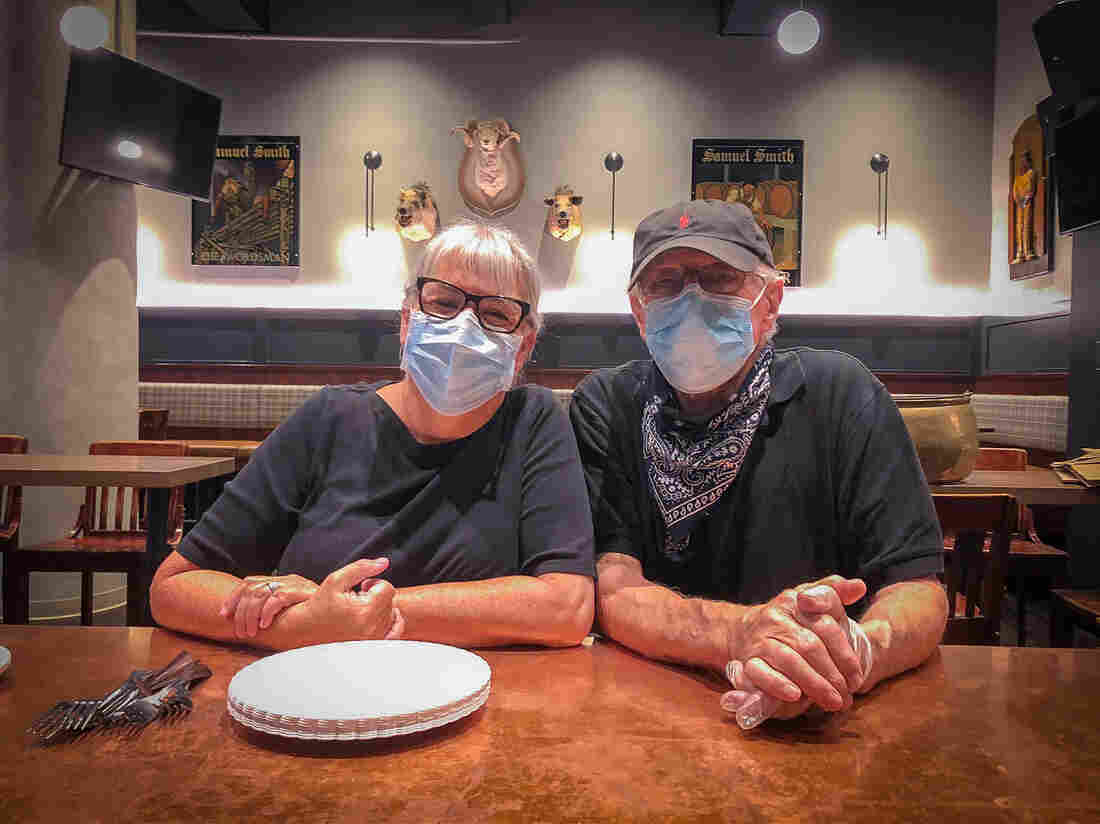 "Look, the most important thing is everybody's health and safety, first and foremost, and you can never lose sight of that," says Pam. "When I see other people opening up, not for me to judge, but I think, 'Take a step back and do it right.' "

It's been a steep learning curve. The Beales and their team have changed not only how they serve, but also what they serve. Because bar seating is prohibited, and they're losing that big business at night, Cornwall's is adding breakfast in the mornings.

Last month, they brought in contractors to revamp their long, copper-top bar. It has been the crown jewel of a space that boasts more than two dozen British and local beers on tap, amid an eclectic mix of vintage beer signs and Red Sox bobble-head figurines. Workers removed a section of the copper top and added plumbing and wiring to accommodate a new espresso machine. 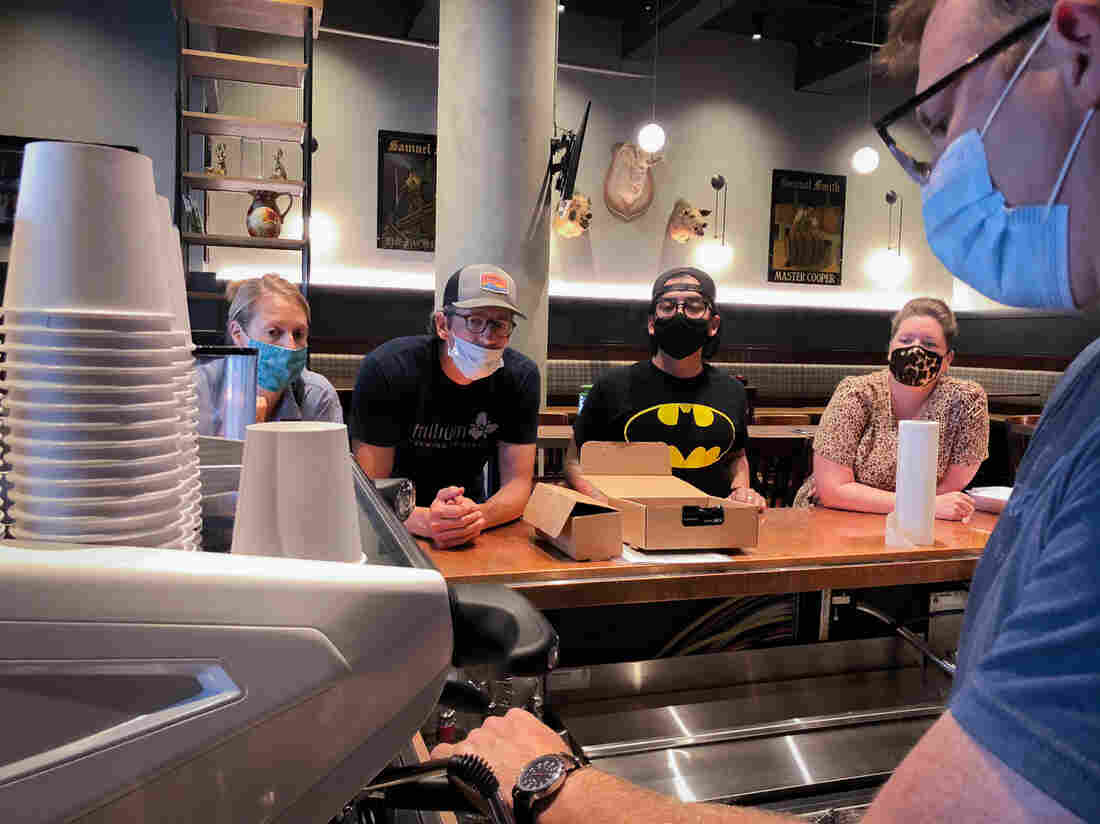 That includes learning how to make breakfast. Billy's wife, Lauren Moran, who opened a café in the suburbs a few years ago, has been teaching John and J.R. to make blueberry muffins and breakfast burritos. And Speedwell Coffee Co. owner Derek Anderson gave everyone a crash course in coffee-making. It included everything from how to grind and time the coffee so it's the "right balance between some sourness, some sweetness and some bitterness" to warnings about pointing the steam valves the right way. If you don't do that, he warns, "you'll definitely soak your shorts or pants."

After decades in the restaurant business, everyone at Cornwall's is a rookie again.

"It's the truth," laughs John. "It's back to basics. You have to have to reinvent yourself."

"It's almost like starting in business all over again," adds Pam.

Resilience is nothing new to the Beales. Since John started as a bartender in 1967, and the couple opened Cornwall's in '83, he's lived through everything from riots during busing and the Boston Marathon bombing to waves of gentrification in Kenmore Square that forced Cornwall's to relocate three times — most recently last summer.

They built out a new space two doors down from their old one, a renovation that included painstakingly removing, transporting and reinstalling a hand-painted wall mural featuring famous Brits such as Margaret Thatcher, Winston Churchill and King Edward.

The relocated pub was open just a little more than six months — and still paying off construction loans — when the pandemic shut it down.

The forced closure "couldn't have happened almost at a worse time for us," says Pam. "It's like standing over a cliff and all of sudden there's no safety net anymore."

Cornwall's is still waiting to hear back on whether it might get help from the government Paycheck Protection Program. Pam says she loses sleep worrying about whether customers will show up or if they'll remain too skittish to eat out, and about grim projections that more than a quarter of restaurants will fail.

"It's not going to be pretty," she says. "But it's not about making money now. It's about surviving."

Days before the scheduled reopening, a skeletal staff comes in for a dry run — cooking, learning how to keep customers properly spaced inside and setting up tables outside on an area of the sidewalk the city is allowing the pub to use. Most other restaurants with outdoor space started serving a month ago, profiting from a record stretch of sunny days. But as luck would have it, Cornwall's curb had become a temporary depot for city buses, making it impractical.

"Nobody's going to want to sit outside breathing bus fumes," says Billy. "It just doesn't make sense to scramble to do it for nothing."

But now, with the buses finally gone, Cornwall's is ready to go for it. The menus have been revamped and reprinted, the Purell stations and social distancing signs are in place and the family is anxious. But as Pam says, they are "all in," both financially and emotionally.

"This is our baby," she says. "It's what we created together."

And like a baby, John says, Cornwall's will continue to grow and change over time, which also can be expected to come with some headaches. But John says he, too, would be lost without it.

"What Cornwall's does now is it keeps me alive," he says. He gets up every morning looking forward to work, and "at end of the day, you look back and you say, 'We accomplished a lot.' You know, there's no more fulfilling thing than that."

After a long day of set-up and training last week, Billy stands behind the bar, looking out at the empty tables and banquettes. On a whim, he flips on some music on the radio, giving the pub one more sign of life — and one more hint of the old, bustling energy he misses.

"When its busy and there's music on and people are interacting and having a good time, it gives me sort of a rush," he says.

It takes him a minute to register what song just happens to be playing: Bob Marley and the Wailers are cooing, "Every little thing gonna be all right!"

"Oh! That's too funny!" Billy notes with a smile. "Hopefully it's a sign."

Pam shares the sentiment. "Knock on wood that it should happen that way," she says.

Editor's note: Since this story aired, Vinny Gibson has told NPR he was wrong about his company's return policy. It was not offering partial credit for partially used kegs, as he stated in our story.