Accessibility links
Opinion: Companies Have A Duty To Defend Democracy A survey of 50 former U.S. ambassadors shows they believe democracy and elections are the top issues that companies need to prepare to publicly address. 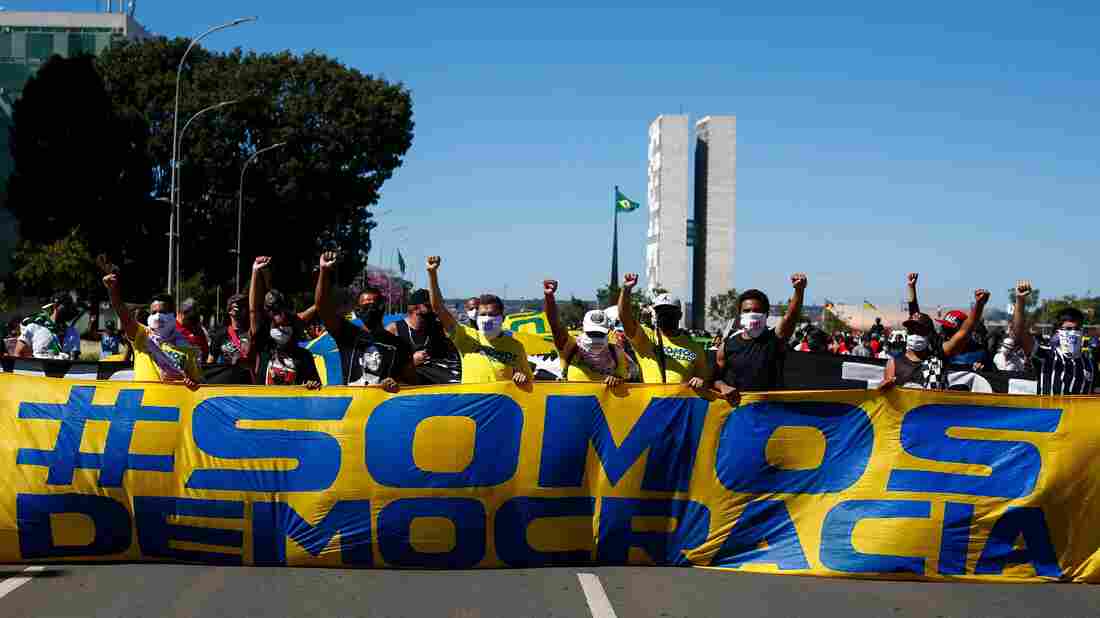 Demonstrators carry a banner that says, "We are democracy" during a protest against racism last month in Brasilia, Brazil. Sergio Lima/AFP via Getty Images hide caption 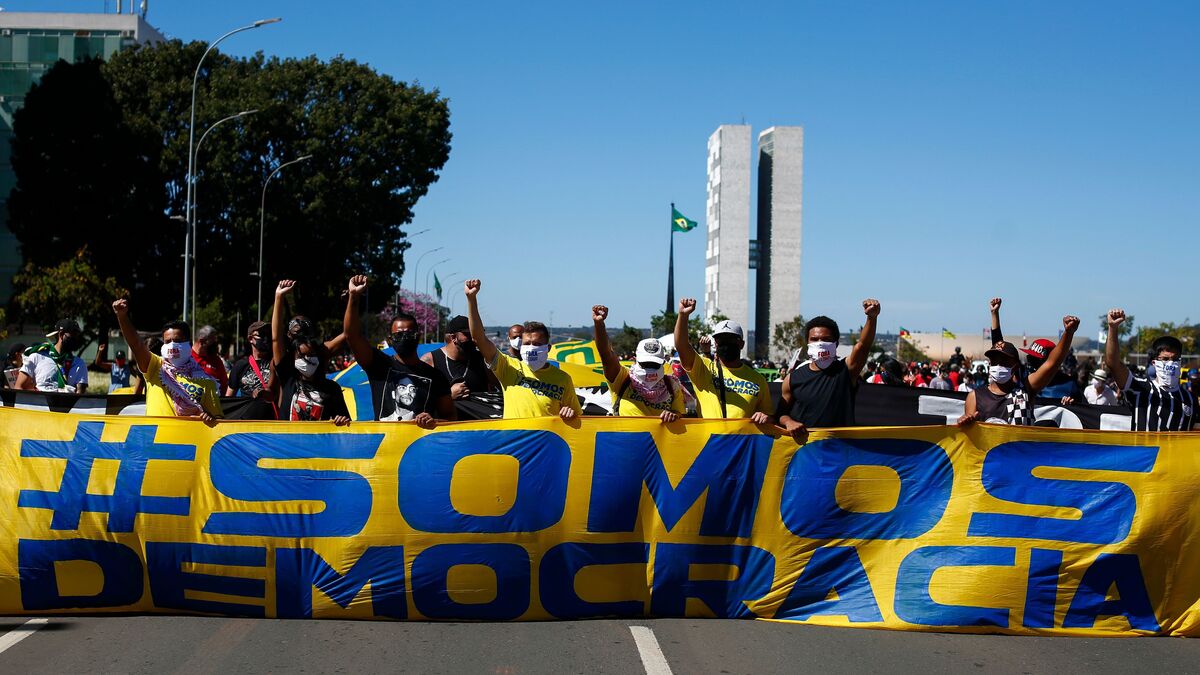 Demonstrators carry a banner that says, "We are democracy" during a protest against racism last month in Brasilia, Brazil.

Brett Bruen was a U.S. diplomat for 12 years and served as director of global engagement in the Obama White House. He now teaches crisis communications at Georgetown University and runs Global Situation Room, a public affairs firm.

America has long considered itself a beacon for democracy. But Donald Trump's presidency has badly damaged our nation's ability to defend democracy around the world. Many foreign leaders are now asking, who will fill the void? A survey we just conducted of 50 former American ambassadors, who served under both Democratic and Republican presidents, came back with an unexpected answer: corporations.

The study, conducted by firms the Global Situation Room and Porter Novelli and published this week, reveals that these diplomats believe issues related to democracy and elections are the No. 1 global risk that businesses need to be prepared to publicly address in the coming year. That's a remarkable reflection on the state of the world.

America's foreign aid is drying up, its moral standing has diminished, and its adversaries seem to be on the ascent. Now, with growing dangers to democracy around the globe, some of our nation's most seasoned diplomats are pinning their hopes on boardrooms from New York to New Delhi.

'We No Longer Wish For Much': People Of Wuhan Share Stories Of Loss And Survival

Many of the challenges with confronting all these issues stem from the same source: absent or dysfunctional democratic institutions. In my assessment, were China a democracy, it would have reported the outbreak of COVID-19 earlier. A similar lack of transparency also afflicts countries like Brazil, Iran and Russia, which have seen some of the worst outbreaks on the planet. The U.S. response is hampered by a president who has shunned traditional governance and oversight roles practiced in our system.

Economic inequities and racial injustices, whether in the United States or abroad, trace back in large measure to deep democratic deficiencies.

The business community has actually been far more responsive to voters' views on issues like gun control, climate change and racism than many politicians.

Companies' involvement in politics often raises concerns and criticism. Their lobbying and large donations are frequently cited as efforts to unfairly manipulate the process in their favor. Perhaps it's time to rethink some of those reservations. The business community has actually been far more responsive to voters' views on issues like gun control, climate change and racism than many politicians. CEOs are now seen in global surveys as more influential on policy matters than most heads of state.

A former U.S. ambassador to several European countries, Kenneth Yalowitz, told me it also has a lot to do with the business' bottom line. "Companies see increasing authoritarianism and corrupt legal systems as complicating their business decisions. The current [U.S.] administration has had a very weak response. Executives know they need to act," he said.

Following the recent protests for racial justice around the world, the private sector came under intense public pressure to react quickly and decisively. The response to the Black Lives Matter movement has set a powerful precedent, requiring executives and their companies to become much more actively engaged in the policies and problems countries confront. 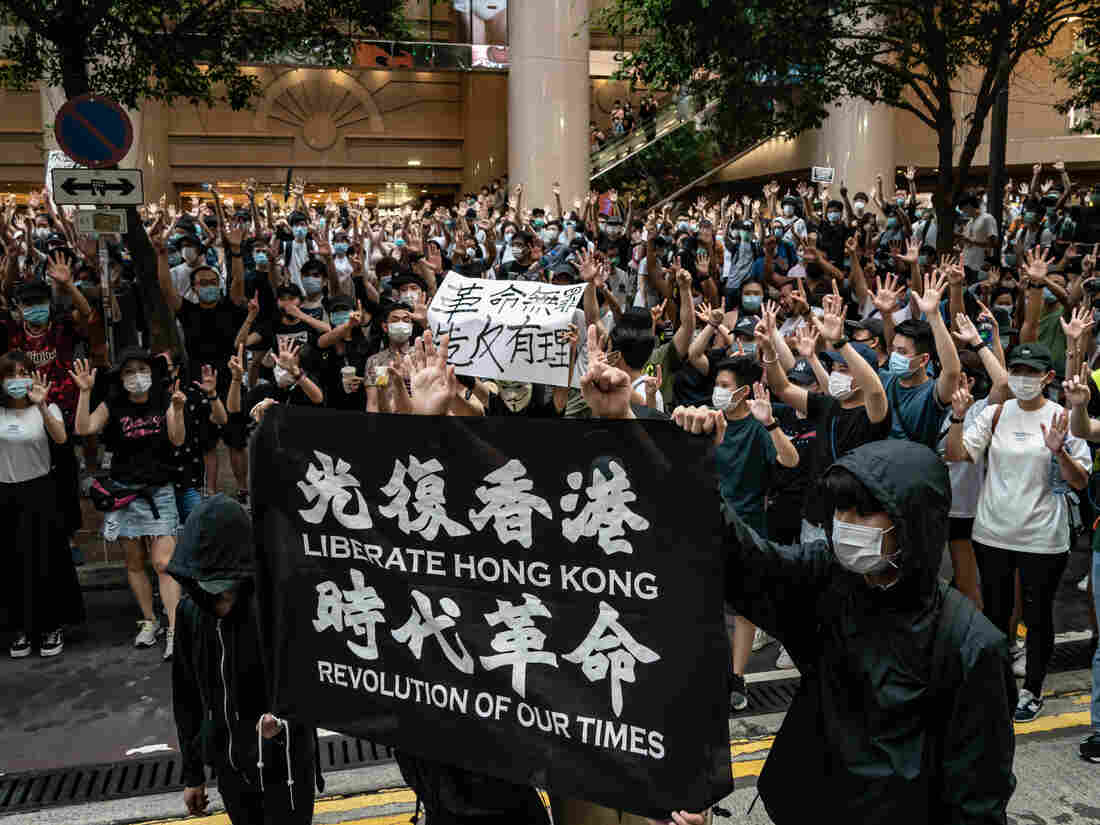 Demonstrators take part in a protest against China's new national security law in Hong Kong on July 1, the day Hong Kong was marking the 23rd anniversary of its handover from Britain to China. Anthony Kwan/Getty Images hide caption 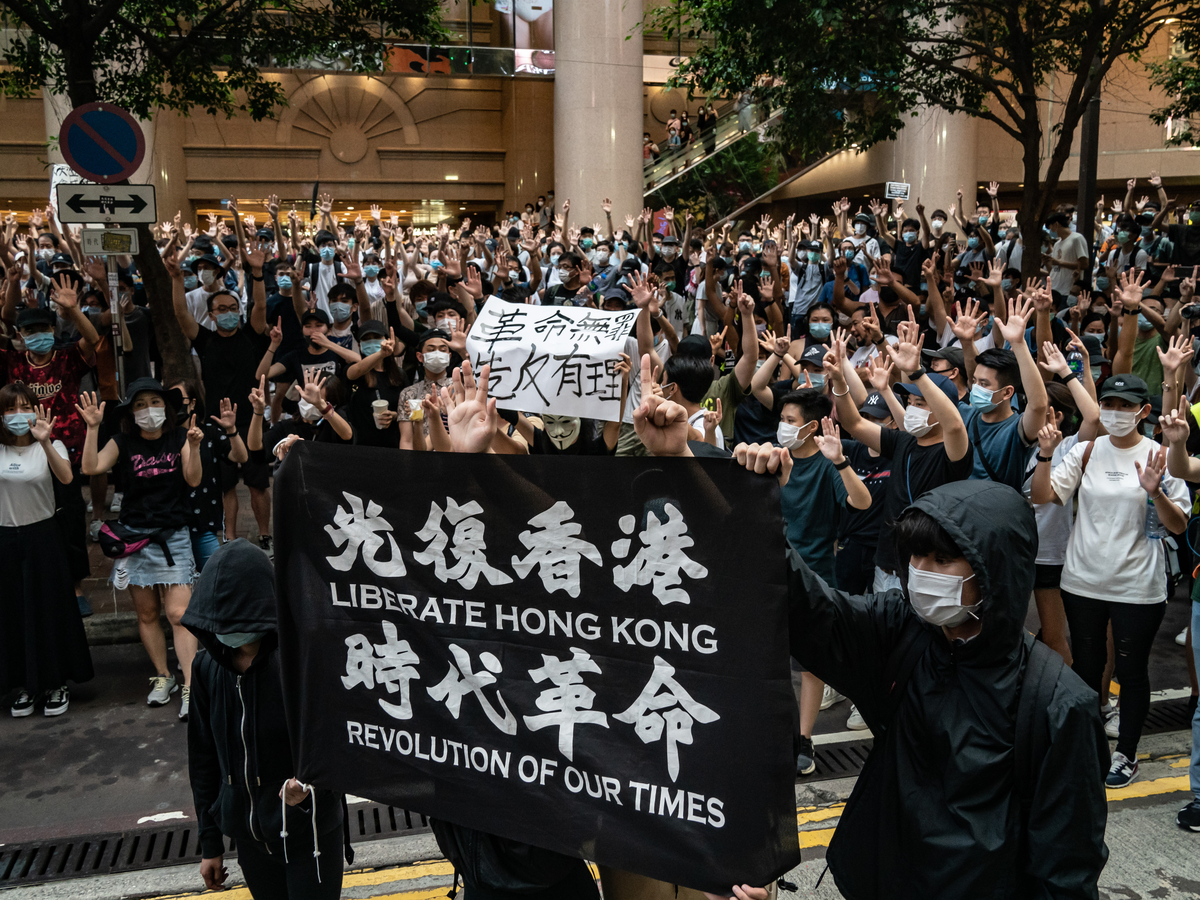 Demonstrators take part in a protest against China's new national security law in Hong Kong on July 1, the day Hong Kong was marking the 23rd anniversary of its handover from Britain to China.

The former ambassadors in our new survey also draw attention to the alarming erosion of standards, structures and the strength of impartial institutions. These trends imperil what progress had been achieved — not just in the United States, but also in places like Hungary, the Philippines and most recently Hong Kong.

In many cases, those who have led America's diplomatic outposts have helped support efforts to secure new freedoms. Former U.S. Ambassador Patricia Moller and I worked in Guinea to support the transition from decades of dictatorship to a fledgling democracy. Many diplomats also tried to save democracies on the decline. Patrick Duddy, the ex-ambassador to Venezuela, and I watched as Hugo Chávez tore down the remnants of its democratic institutions.

So, what can companies actually do to defend democracy? A number of them are already engaging in small but significant ways.

Last month, Twitter, Uber and Blue Apron announced they would give employees a paid day off when their country holds elections. Clothing company Patagonia already did, starting in 2016. This move allows staff not only to vote, but also to help others get to the polls. They are able to serve as poll workers, potentially expanding the number of precincts that can be staffed. Insufficient polling locations was a major issue during recent primaries in Wisconsin and Georgia.

This week, companies such as Google, Facebook, Twitter and Microsoft said they would stop processing user data requests from Hong Kong's government after China curbed freedoms in the city.

Hundreds of companies recently halted advertising on Facebook to protest how the social media company handles hate speech — in a show of how corporate action can also be used against another company. Their decision is likely to enhance public debate.

Businesses have the power of the purse. I saw firsthand in countries across Africa, Latin America and the Middle East how companies' investment decisions helped leaders adhere to or adopt democratic practices. Executives would warn politicians that curbing freedoms or rigging elections could result in a reduction in their companies' presence or a pullout altogether. It often served as the most effective deterrent to bad behavior.

The application of emerging innovations and investment in new technology can be transformative, particularly for transparency. When Ambassador Moller and I were working with the transitional government in Guinea, local cellphone companies helped us quickly set up a system to monitor elections by text message. It played an important role in deterring vote manipulation and providing citizens with a means for reliably reporting issues.

Elections are coming up this year in countries as far flung as the U.S., Poland, Bolivia, Jordan and Sri Lanka. Whether they can withstand the propensity of populist politicians to eschew legal limits and fabricate facts will largely depend on democratic leaders' ability to deter these destructive tendencies. In many countries, a strong stand by corporations on the protection of political freedoms would send a powerful message. It's time for businesses to take on a larger role in the defense of democracy.