Accessibility links
As Coronavirus Cases Spike, Trump Pushes Reopening Schools The administration acknowledges the risk of students spreading the contagion to vulnerable populations but emphasizes that school closures disrupt "critical services to children and their families." 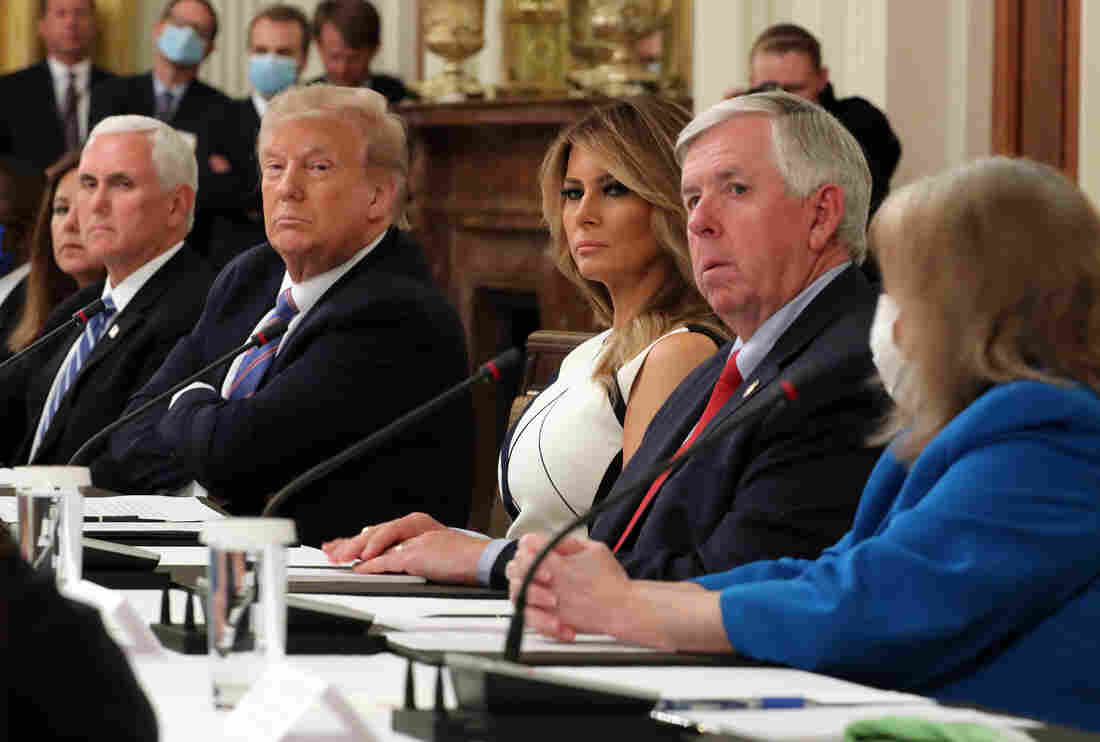 With Vice President Pence and first lady Melania Trump at his side, President Trump participates in a White House event Tuesday with students, teachers and administrators about how to reopen schools safely during the pandemic. Chip Somodevilla/Getty Images hide caption 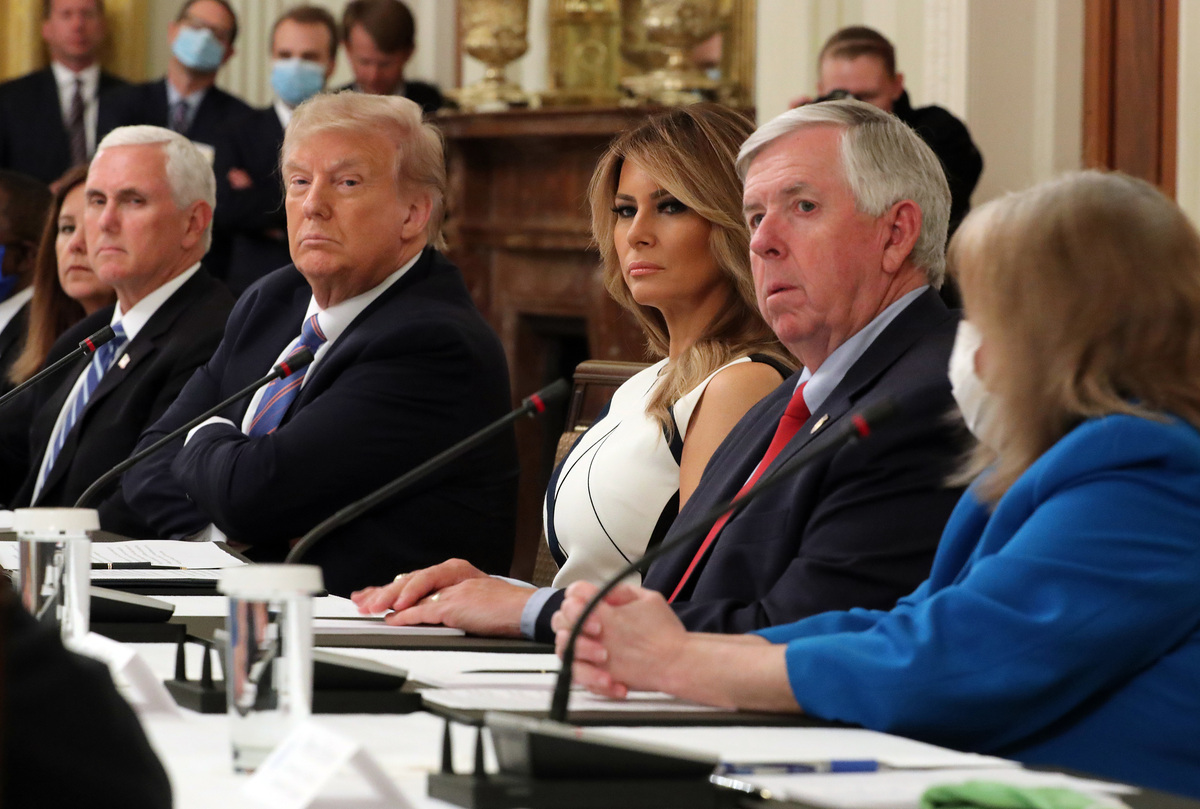 With Vice President Pence and first lady Melania Trump at his side, President Trump participates in a White House event Tuesday with students, teachers and administrators about how to reopen schools safely during the pandemic.

President Trump vowed to exert pressure on states to reopen their school districts this fall even as large parts of the country are experiencing a spike in COVID-19 cases.

"We're very much going to put pressure on governors and everybody else to open the schools," Trump said during a roundtable discussion Tuesday afternoon at the White House.

"Get open in the fall. We want your schools open," Trump said.

The president spoke alongside first lady Melania Trump, administration officials and teachers as part of planned programming from the White House to push for the reopening of schools.

Despite Trump's comments, senior administration officials said on a background call with reporters Tuesday morning that the decision to reopen public schools remains a local one.

"Our goal right now is to work hand in hand with the local jurisdictions now to help let them see the best ways to reopen these schools in a safe way and get back to where we would have really preferred to have been through the spring of this year, which was to have that active educational component available to the students," one official said.

On Monday, Trump tweeted, "SCHOOLS MUST OPEN IN THE FALL!!!" However, during Tuesday's event, the president said he doesn't want to see the issue politicized.

"We hope that most schools are going to be open. We don't want people to make political statements or do it for political reasons. They think it's gonna be good for them politically so they keep the schools closed," Trump elaborated. "No way."

It's not the first time Trump has linked the reopening of schools with political intentions. He previously tweeted that presumptive Democratic nominee Joe Biden doesn't want schools to open in the fall for "political reasons." He did not elaborate on what that means.

Administration officials acknowledged the risk of students spreading the contagion to more vulnerable populations but emphasized that school closures disrupt "critical services to children and their families."

They promised the administration would share "best practices" with states on reopening in accordance with recommendations from the Centers for Disease Control and Prevention but offered no concrete proposals on how states might mitigate risks to students and their families should schools reopen.

During the roundtable, the first lady emphasized the holistic experience of school that children have been missing out on during the pandemic.

"When children are out of school, they're missing more than just time in the classroom," she said. "They're missing the laughter of their friends, learning from their teachers and the joy of recess and play."

Education groups have asked for at least $200 billion in federal funding to reopen safely and plug holes in state budgets due to the recession. So far, $13.5 billion has been appropriated to K-12 education.

The Republican-controlled Senate has not taken up a bill passed by House Democrats that would allocate hundreds of billions more.

The shuttering of schools this spring has taken an economic toll. Many parents are working from home alongside their children as they receive online education.

In guidance issued last week, the American Academy of Pediatrics called for bringing children back to the classroom this fall wherever and whenever it can be done safely.

Tuesday's programming also included a call between Vice President Pence and governors (which administration officials said was his second such call) and a panel discussion with Health and Human Services Secretary Alex Azar and Education Secretary Betsy DeVos led by Dr. Deborah Birx, a member of the White House Coronavirus Task Force.

Trump criticized Harvard University for its announcement on Monday that all classes will be online in the fall.

"I think it's ridiculous," he said. "I think it's an easy way out, and they ought to be ashamed of themselves."