Accessibility links
U.S. Killing Of Iran's Gen. Soleimani 'Was Unlawful,' U.N. Expert Says President Trump said the U.S. targeted Iran's Qassem Soleimani because of an imminent threat. A U.N. investigator says the U.S. has produced no evidence to back that up. 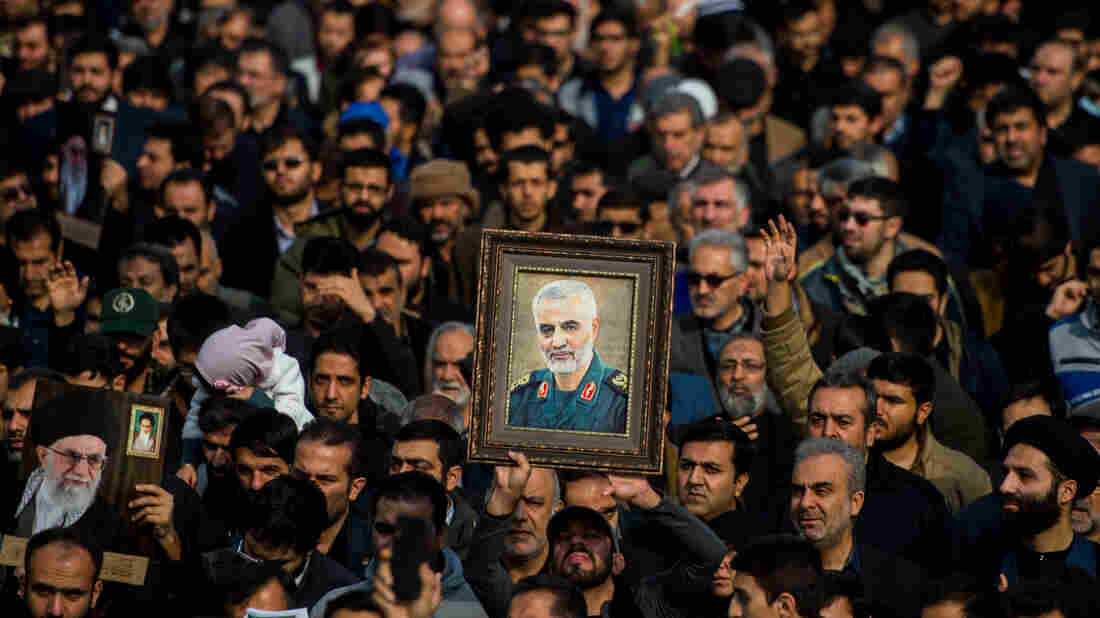 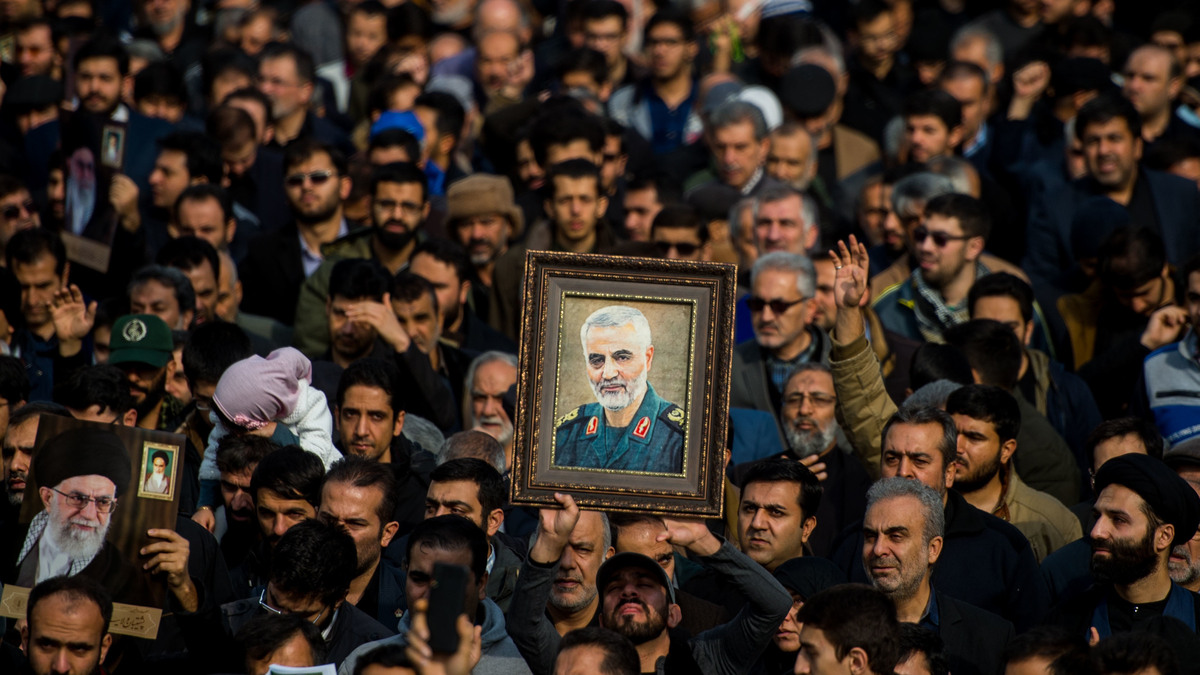 The U.S. killed Iranian Maj. Gen. Qassem Soleimani in a targeted drone strike in Baghdad. A U.N. investigator says the action violated Iraq's sovereignty. Here, protesters in Tehran, Iran, hold up an image of Soleimani during a demonstration on Jan. 3.

The U.S. killing of Iranian Maj. Gen. Qassem Soleimani in January "was unlawful and arbitrary under international law," a U.N. human rights investigator says, calling the drone strike in Baghdad a violation of Iraq's sovereignty.

The investigator also says the U.S. has not produced any proof to back its claim that the attack was justified by the need to stop an imminent attack.

Soleimani was the highly influential commander of the Quds Force unit of Iran's Islamic Revolutionary Guard Corps. The U.S. killed him in a targeted drone strike on Jan. 3, as Soleimani and others traveled in a convoy from Baghdad's airport.

President Trump, Secretary of State Mike Pompeo and Secretary of Defense Mark Esper have said the U.S. targeted Soleimani — a key architect of Iran's strategy in conflicts involving the U.S. — to prevent a looming threat.

After ordering the strike, Trump said Soleimani was "plotting imminent and sinister attacks" against American interests.

But Agnes Callamard, the U.N. special rapporteur on extrajudicial, summary or arbitrary executions, says U.N. investigators found nothing to justify the U.S. rationale. She also says that because the January attack in Baghdad took place without Iraq's consent, it violated Iraq's sovereignty.

"No evidence has been provided that General Soleimani specifically was planning an imminent attack against US interests, particularly in Iraq, for which immediate action was necessary and would have been justified," Callamard wrote in her report, which is being presented to the U.N. Human Rights Council later this week.

The U.S. will not take part in the Human Rights Council session — the Trump administration withdrew from the U.N. body two years ago, citing its controversial inclusion of countries such as Saudi Arabia and China.

Callamard says the U.S. attack in Iraq violated Article 2(4) of the U.N. Charter, which "prohibits the threat or use of force and calls on all Members to respect the sovereignty, territorial integrity and political independence of other States."

Noting the acrimony that exists between the U.S. and Iran, Callamard say that in the tense days after the military leader's death, statements from both governments focused more on past disputes and clashes than on any future or imminent threats in which Soleimani may have played a role.

Soleimani's killing is the first known time a nation has invoked self-defense in an attempt to justify "an attack against a State-actor, in the territory of another state," the rights investigator said.

The January strike on Soleimani's convoy killed at least 10 people. Five members of Iraq's Popular Mobilization Forces, which is backed by Iran, were among the dead. Four other members of Iran's Islamic Revolutionary Guard Corps were also killed in the blast.

Noting that the Iranians had arrived on what was reportedly an official visit at the invitation of Iraq's prime minister, the U.N. investigators say the Popular Mobilization Forces' deputy commander met Soleimani at the airport moments before the convoy was targeted.

The attacks by the U.S. and Iran are linked to scores of civilian deaths, the report says.

Most directly, in the tense days that followed the exchange of attacks in Iraq, Iran's armed forces unintentionally brought down a Ukrainian jetliner, killing all 176 people on board. And the report notes that protesters in both Iran and Iraq were killed during demonstrations fueled by outrage over the strikes and the downing of the passenger jet.

In her report, Callamard also calls for new restrictions around the use of drones, saying their combination of efficiency and advanced technology raises complicated moral and legal questions that the international community has yet to answer.

"As a number of drones' strikes have demonstrated, a country's ability to take-out big-name targets, without any casualties on its side, is a political gain for the government at the time," she writes, "even though it may not see 'military victory' in the longer term."