Accessibility links
City Dwellers Are Looking To Move To Suburbs As More Work From Home Now that so many are working from home, more people are considering moving out of the city. The pandemic has sent enough New Yorkers to the exits to shake up the area's housing market. 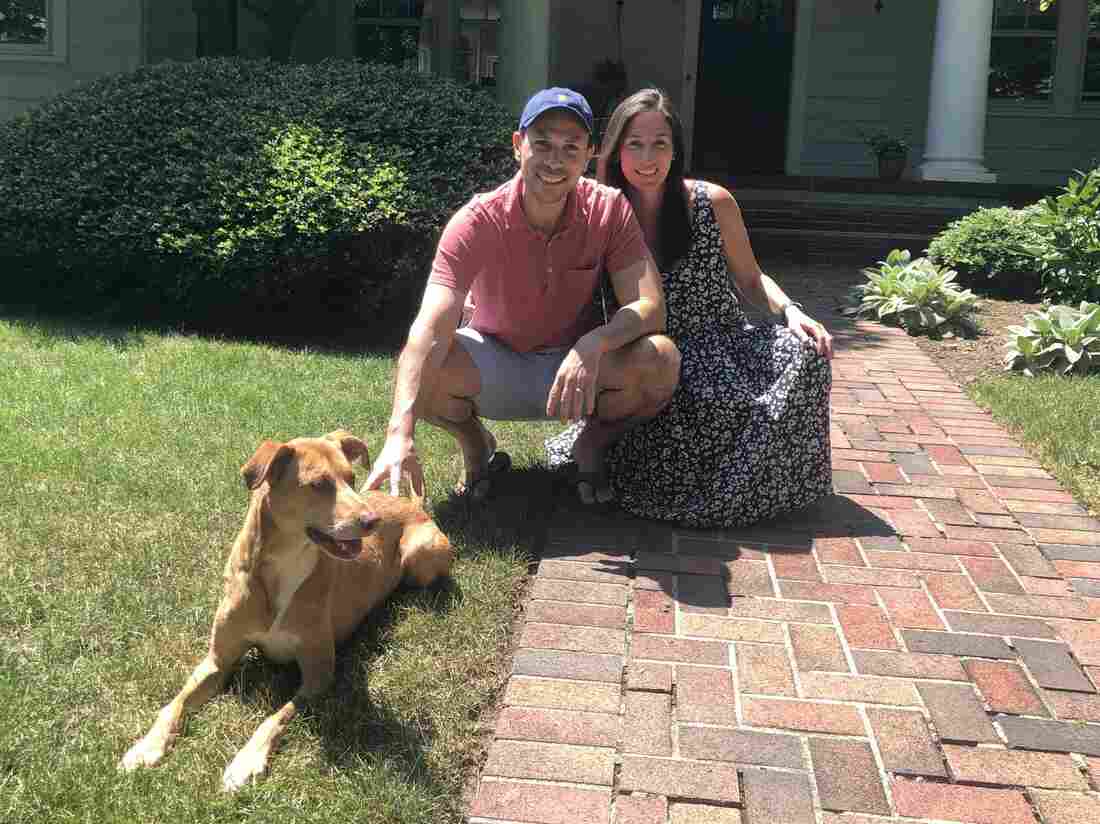 Until recently, Steven Kanaplue and Miriam Kanter were living in a one-bedroom apartment on Manhattan's Upper West Side with their dog Booey. The pandemic clinched their decision to move to Montclair, N.J. Norman Kanaplue hide caption 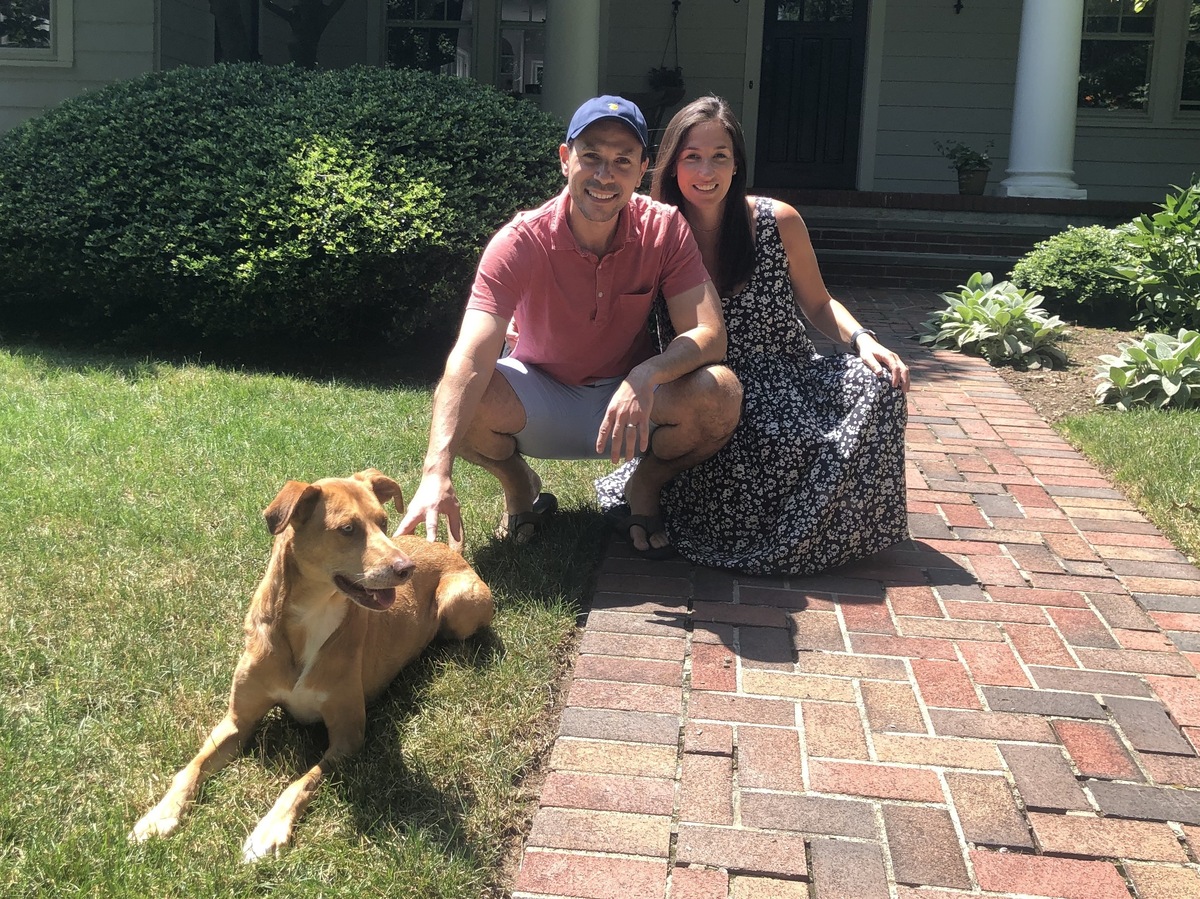 Until recently, Steven Kanaplue and Miriam Kanter were living in a one-bedroom apartment on Manhattan's Upper West Side with their dog Booey. The pandemic clinched their decision to move to Montclair, N.J.

Trends often start in New York. The latest: quitting the city and moving to the suburbs.

If not quite an exodus, the pandemic has sent enough New Yorkers to the exits to shake up the area's housing market. Longtime real estate agent Susan Horowitz says she has never seen anything like it. She describes the frantic, hypercompetitive bidding in the suburb of Montclair, N.J., as a "blood sport."

"We are seeing 20 offers on houses. We are seeing things going 30% over the asking price. It's kind of insane," Horowitz says.

About 12 miles from New York City, Montclair is the kind of suburb that even appeals to demanding New Yorkers. It has yoga studios, restaurants locals can walk to, art galleries, even a film festival. It's always popular, but now on a completely different scale. "Every last bit of it is COVID-related," Horowitz says.

New Yorkers aren't the only big city dwellers who have been decamping for suburbs, smaller cities and rural areas. It began with the affordability crisis in cities such as San Francisco, New York and Los Angeles and has only picked up momentum during the pandemic, according to Glenn Kelman, CEO of the national online brokerage Redfin.

The effects of COVID-19 have made many people "wary of living in close quarters," he says. On top of that, the freedom to work from home means "a huge percentage of people are now looking further afield."

Ditching the city and buying a quiet place away from the crowds takes money. Only the relatively well-off can do it. But low interest rates could make homeownership affordable to more people for whom it has been out of reach — if they've maintained their income during the recession.

By all accounts, the coronavirus has been a catalyst, prompting people who had been toying with moving to take the plunge finally — like Miriam Kanter and Steven Kanaplue. They're expecting their first child in September. Kanter works in ad sales; Kanaplue is in risk management. And until recently they were living in a one-bedroom apartment on Manhattan's Upper West Side with their dog Booey. As the virus spiked in the spring, stepping outside became a nerve-wracking experience. "Coming in and out of the building at least four to five times a day to walk him [Booey] — it was getting really stressful," Kanter says.

More Lysol, No More Pens In Rooms. Hotels Adapt To Win Back Guests

They had been planning to move to the suburbs since January. The pandemic clinched it. "Being in the epicenter, the washing of the hands, the nerves of it all. It was pushing us out the door," Kanter says.

Out the door to Montclair. In late April, their offer on a Colonial-style house with black shutters and a big front porch beat out four other bids. Kanter says they paid almost 20% above the asking price and thinks they would have been forced to pay even more if they had waited to buy a place. And so on June 1, they moved in and officially became suburbanites. "Everything changed the moment we could let the dog out in the yard," Kanter says.

Similar stories are playing out throughout the greater New York area. Since March, around 10,000 New Yorkers applied to change their address with the U.S. Postal Service and moved to Connecticut, according to Hearst Connecticut Media.

Monica Schwerberg is a real estate agent who works with clients who want to live within two to 2 1/2 hours of New York City, mostly rural areas upstate. "Things have definitely picked up and have gotten pretty wild," she says. In a busy April, when home shopping typically picks up, she and her colleagues would typically get about 75 inquiries. This April, it was more than 400.

The option of moving to the countryside has become more viable with remote work taking hold, says Kelman, Redfin's CEO. "All over the country, folks who had really thought 45 minutes or an hour was the limit to my commute are now willing to commute two or three hours because they're only planning to come into the office once a week," Kelman says.

In May, Melisse Gelula and her spouse, Tiffany Wolf, moved from a rental apartment in Brooklyn to the bucolic hamlet of Narrowsburg along the Delaware River in upstate New York. One point of comparison between city and country? "The town of Narrowsburg has a population of about 400, which is less than the building where I lived in Brooklyn, which had about 750 units," Gelula says.

For five years, they had been coming to the Narrowsburg house for weekends and holidays. It's about two hours from the city. Gelula, a wellness expert and media entrepreneur, says the decision to move permanently was partly dictated by finances and the sky-high cost of living in New York. There were other motivations as well. "I needed a place that didn't look on to other buildings, that looked on to trees," Gelula says. "For me and my well-being, being in nature is really, really vital."

And the pandemic landed with its full force close to home. She saw funeral homes with refrigerated tents and trucks to accommodate the overflow of the deceased. "It made Brooklyn feel a lot different to me," Gelula says. "I thought maybe this is not the time for us to stick it out, maybe this is the time for us to retreat and come back when New York has had a moment to breathe and heal."