Accessibility links
Baseball Summer Camp - Sharpening Skills While Fending Off The Coronavirus Major League Baseball is getting ready to play ball once again. But it all depends on the coronavirus. Teams have begun 'summer training' before a shortened season that's supposed to begin on July 23. 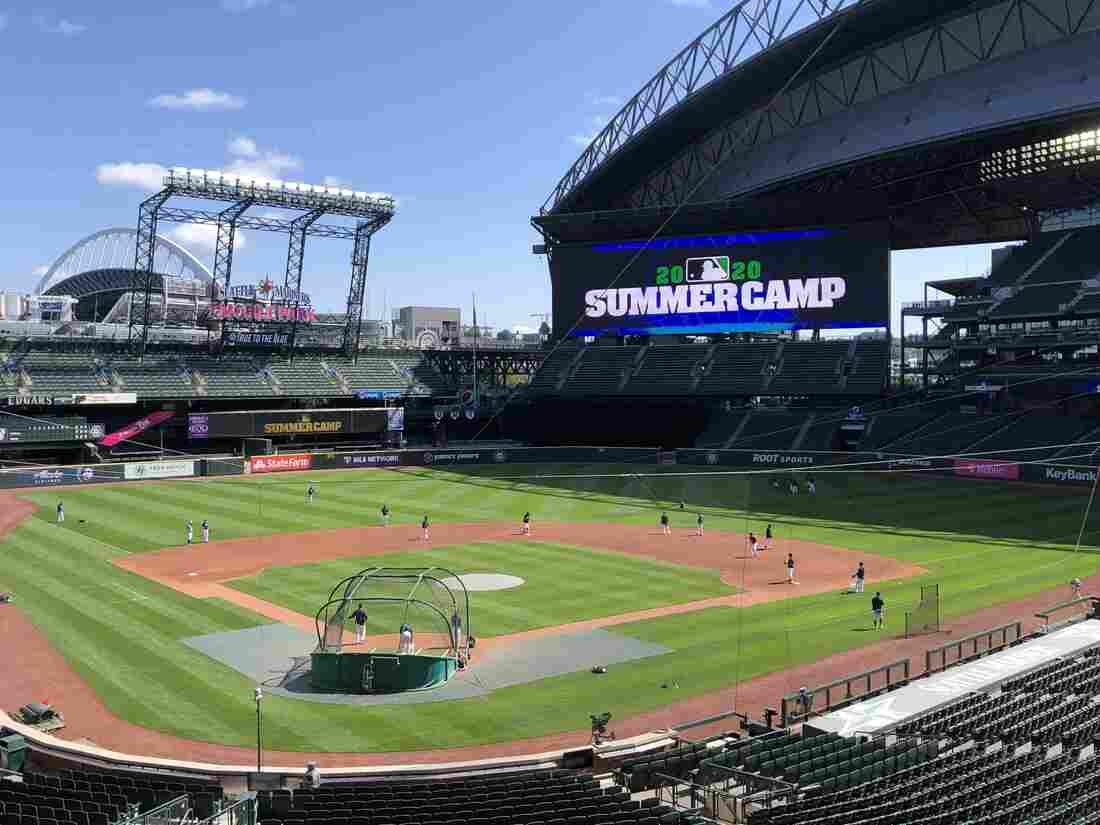 Seattle Mariners players are gearing up for the start of a shortened regular season. At their home ballpark, summer training is underway this week with strict coronavirus restrictions. Tom Goldman/NPR hide caption 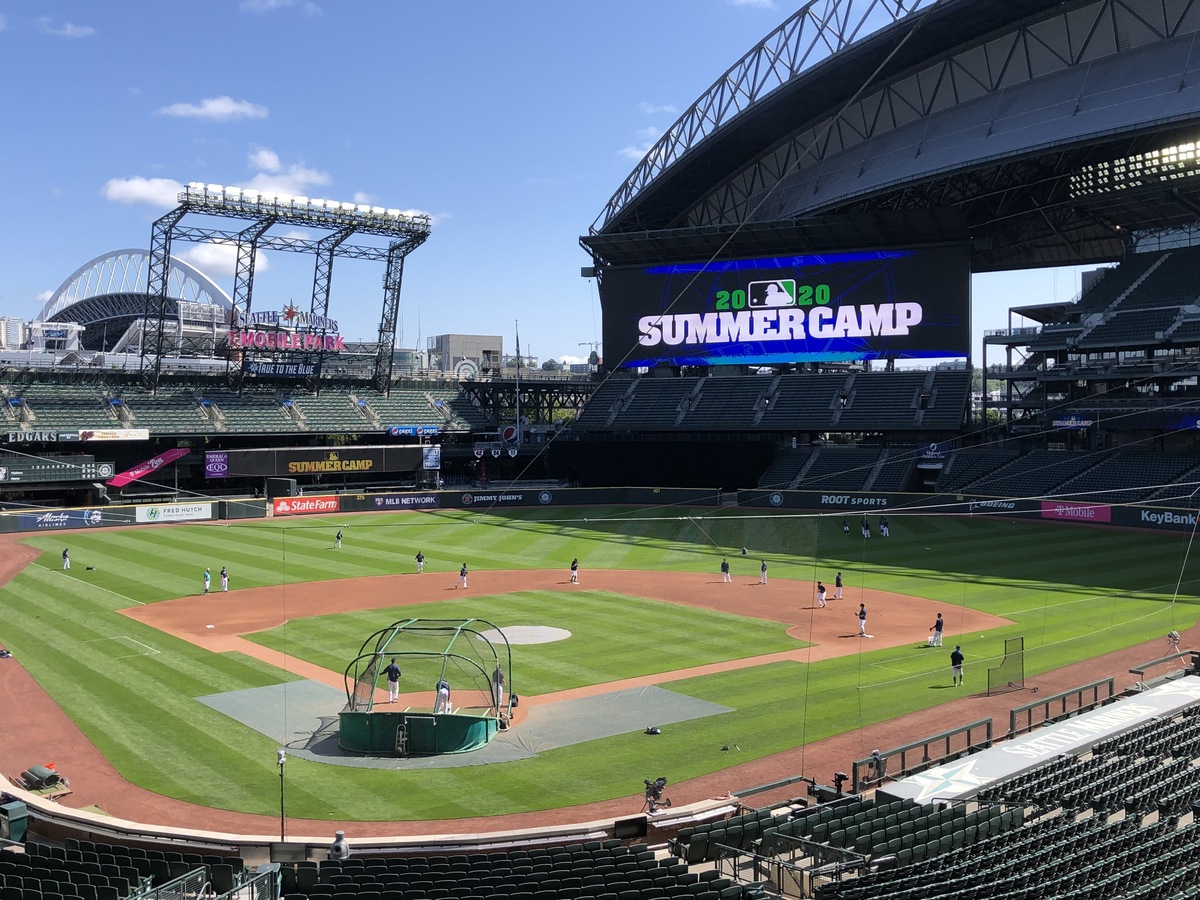 Seattle Mariners players are gearing up for the start of a shortened regular season. At their home ballpark, summer training is underway this week with strict coronavirus restrictions.

Not long ago, a Major League Baseball season seemed improbable, with owners and players fighting about how to restart in the middle of a pandemic.

Now, the fighting is over, at least publicly.

And the Majors are a little more than two weeks away from playing ball. If all goes well.

Until then, teams are holding summer camps around the country, where players are quickly sharpening their baseball skills and adjusting to a slew of coronavirus safety measures.

When baseball shut down in March, it interrupted the languid days of spring training. Picture fans lounging on blankets, under the Florida and Arizona sun.

There are no fans. And if you want to cover it as a reporter, you first have to get past people like Tyler King.

Baseball Is Coming Back For A Pandemic-Shortened 2020 Season

"In the past 72 hours, have you experienced any of the following symptoms?" King asked a journalist this week at a booth outside T-Mobile Park, home to Major League Baseball's Seattle Mariners. King was wearing a face shield and holding a clipboard. He works for Amphibious Medics, a company the Mariners contracted to do COVID-19 screening.

"Alright, we'll get your temperature here," King said as he reached for the visitor's forehead. "98.0 – he's good for a wristband."

Then, after signing a waiver protecting the Mariners from COVID liability, it's time to head to the press box and a welcome sight.

The field's bright green grass is mowed to perfection. The massive video board flashes "Summer Camp 2020." Pitchers pitch. Batters bat. With the press box windows open as a precaution, you can clearly hear the crack of bat on ball, even pick up what players and coaches are saying, albeit muffled by face masks.

This view from above is as close as it gets – reporters aren't allowed on the field, in the clubhouse, or anywhere else in the stadium. Player, coach and manager interviews, easily accessible during spring training, now are limited to Zoom sessions online.

"It is great to you see you all," Seattle manager Scott Servais told reporters in his first Zoom session of summer camp. "This is unprecedented times but I'm really, really happy we're getting a chance to get back together."

Servais was pressed for time, however. He had to get to a team meeting, in the stands along the first base line. Players at the meeting sat in every other row, several seats between them. They wore face masks. The clubhouse, a normal meeting site, now has limits to how many people can gather at a time.

At summer camp, as players shake the rust off their baseball skills, everyone – players, coaches, staff, reporters – is test driving baseball's 113-page health and safety plan. 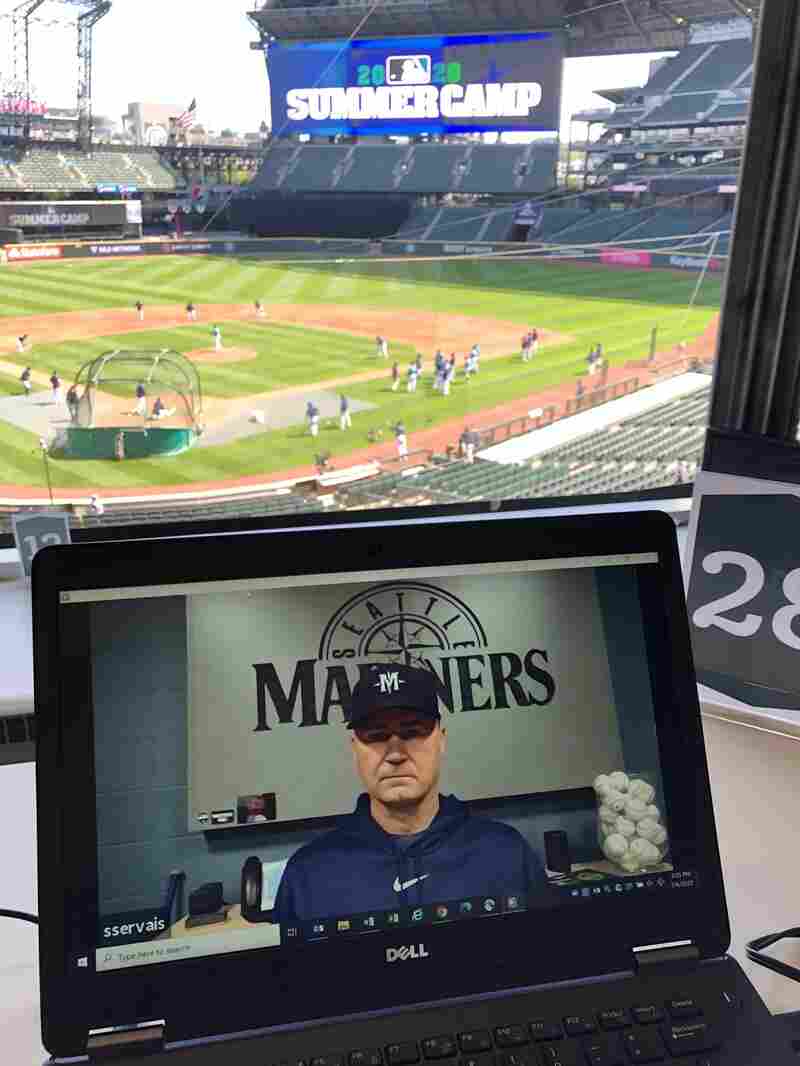 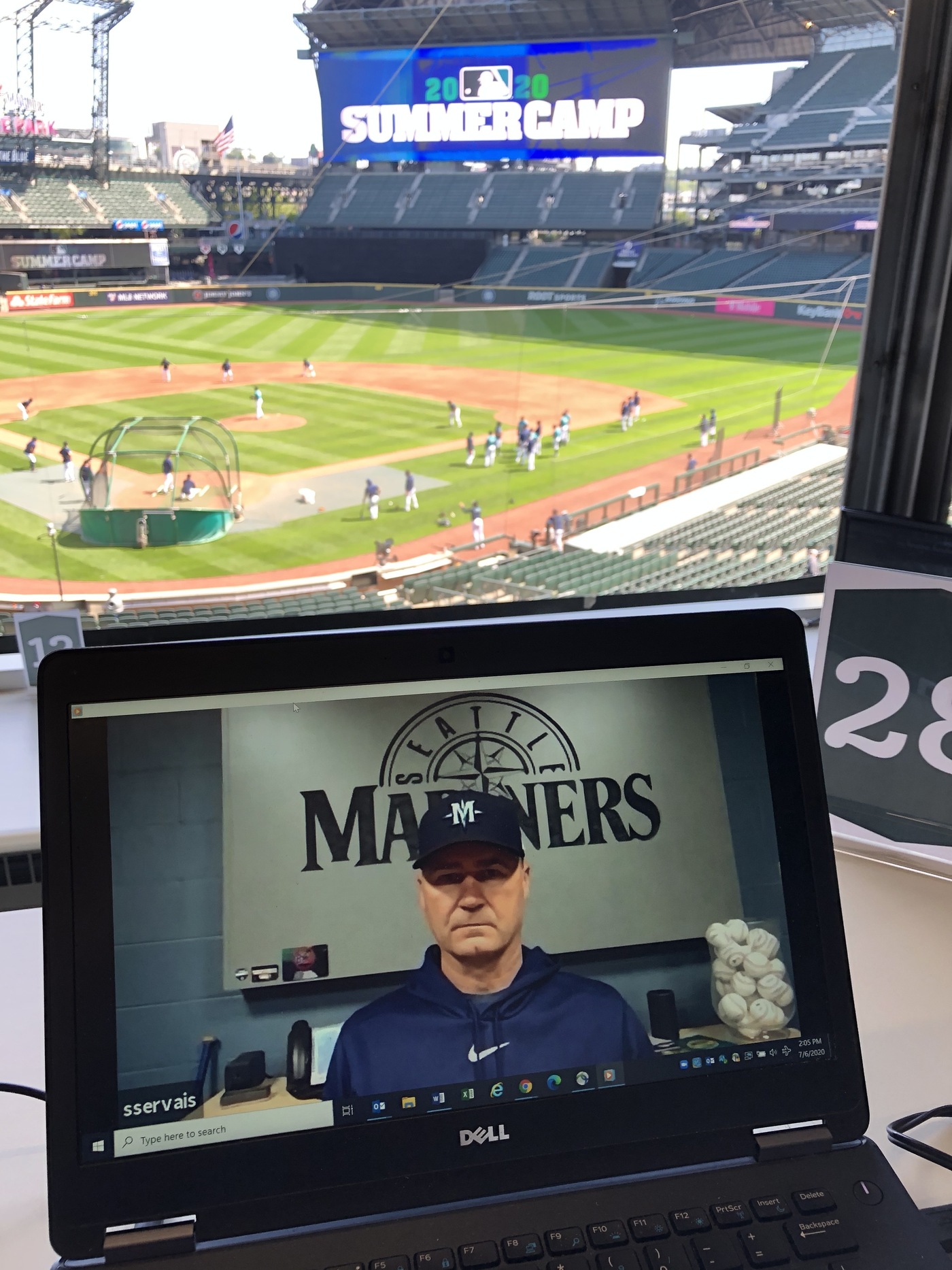 And Servais is determined to make sure the Mariners adhere.

There are so many rules to follow. Every other day testing. No public transportation to or from the stadium. Physical distancing as much as possible. Players using their own personal equipment as much as possible. No fighting (not a bad idea under normal circumstances). Lots of hand washing.

And in a hurried-up version of spring training, it's sometimes easy to forget.

"It's very strange, still," said pitcher Justus Sheffield. "The main thing for me is remembering the mask. Just kind of before, free and easy walking around the [clubhouse], being able to hang out with friends, teammates. [Now] it's kind of in and out. Get your work in, make sure you have a mask on at all times. Hand sanitize."

The consensus is no spitting may be the hardest one to remember. Spitting, after all, is one of baseball's enduring, unconscious habits. It's also an easy way to transmit the coronavirus.

"I think today I was spitting and somebody got onto me," Sheffield laughs. "That's going to be tough. Especially pitching, you know. when you're out there and not thinking. It's a work in progress."

"I think Seag is probably the biggest one," Mariners outfielder Braden Bishop said. "He's got family here with [him]. He talked to us yesterday about, we were put in this position, we have this opportunity to play. We can only control so much, but what we need to control is extremely important, like more so than any other year. So while [we] need to focus on baseball, to be ready to play, [we] also have to take into account, okay, I'm going back to the hotel. Like, I can't do these certain things I could in the past because it can affect 50, 60 people."

"I think the biggest problem is you could put in the greatest protocols ever, but if you don't have full compliance by every single guy and every single employee, it puts everyone at risk. While the percentage is small, you don't want one of those serious cases [of COVID-19] to be part of our group."

According to Servais, the Mariners have had "a few players" test positive.

"We'll wait and see," Servais said this week. "Certainly there's a protocol they have to go through before they can come back inside the bubble, so to speak. T-Mobile is our bubble. We'll follow the guidelines MLB's set up. They're very strict. Rightly so."

While camp seems to be working in Seattle, other teams around the league are having a rough start as they prepare for the regular season.

Last season's World Series competitors, the Washington Nationals and Houston Astros, were among several teams to cancel workouts this week after a delay in getting coronavirus test results.

MLB acknowledged the delays were due to delivery and shipping service problems during the Fourth of July holiday weekend. Baseball officials say it's "addressed the delays and does not expect a recurrence."

With so many fragile and moving parts in the baseball restart, avoidable holiday shipping delays fueled critics belief that, with the pandemic surging again in this country, an MLB 2020 season, even one shrunk from a 162 game marathon to a 60-game sprint, is a fool's errand.

For this and other reasons, some players have opted not to play.

Asked about them, several Mariners said they have no problem.

"For each guy, it's a personal, family decision," Seattle pitcher Marco Gonzales said. "One that shouldn't be taken lightly. For the guys who've opted out, I don't think they owe anyone a reason. I think there are plenty of reasons to opt out of this season, whether family, personal reasons or whatever."

Braden Bishop says he debated what to do after his brother tested positive for COVID-19.

"[He was] a good example for me that the virus doesn't take time off," Bishop said. "He's healthy, athletic and he got it. While he doesn't have extreme symptoms, we don't know the possible adverse effects down the line. That's the thing we're both worried about. It was definitely scary."

Despite his fears, despite the strangeness of this season, Bishop chose to play.

"My window in the Major Leagues, whether it be two years, whether it be ten years," Bishop said, "[it's] going to be such a short time and I don't want to let this crazy 60 game season be the reason that, y'know, I wasn't ready and I played poorly and then my career was over because of that."

Bishop, and his teammates, will try to be as ready, and healthy, as they can be, for their opening night game. It's scheduled for July 24th, in Houston.