Accessibility links
In Alabama, A City Debates How To Depict Its Past In The Present When the city of Mobile, Ala., took down a statue of a Confederate naval officer it sparked a conversation about what the statue meant, and how the city's Confederate history should be portrayed. 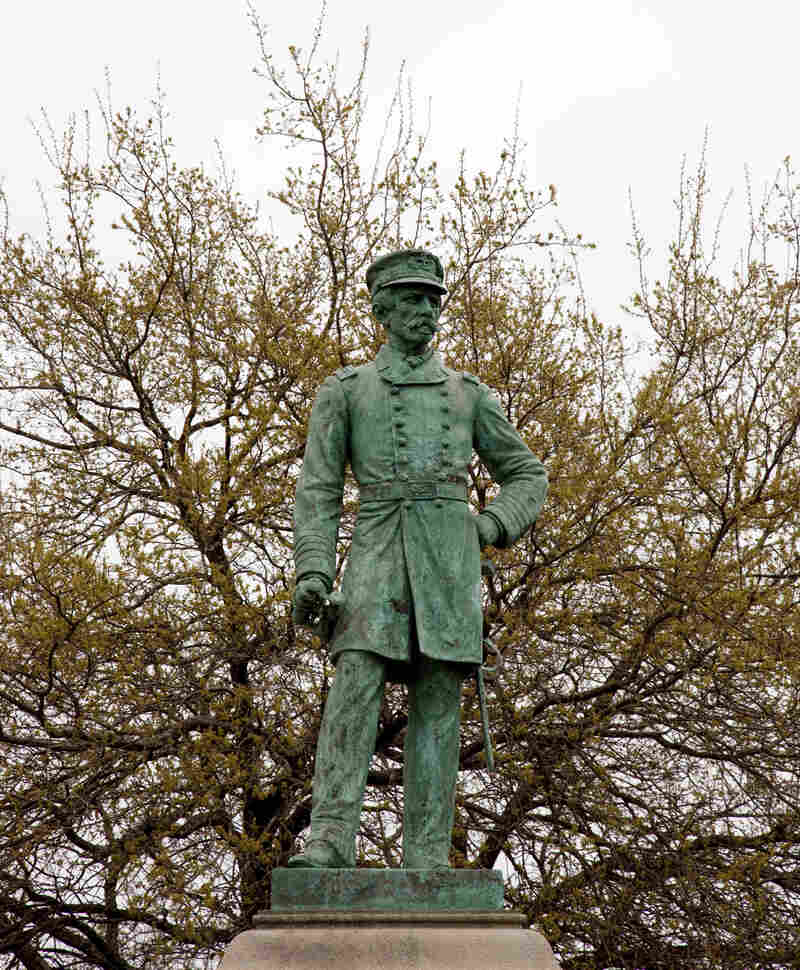 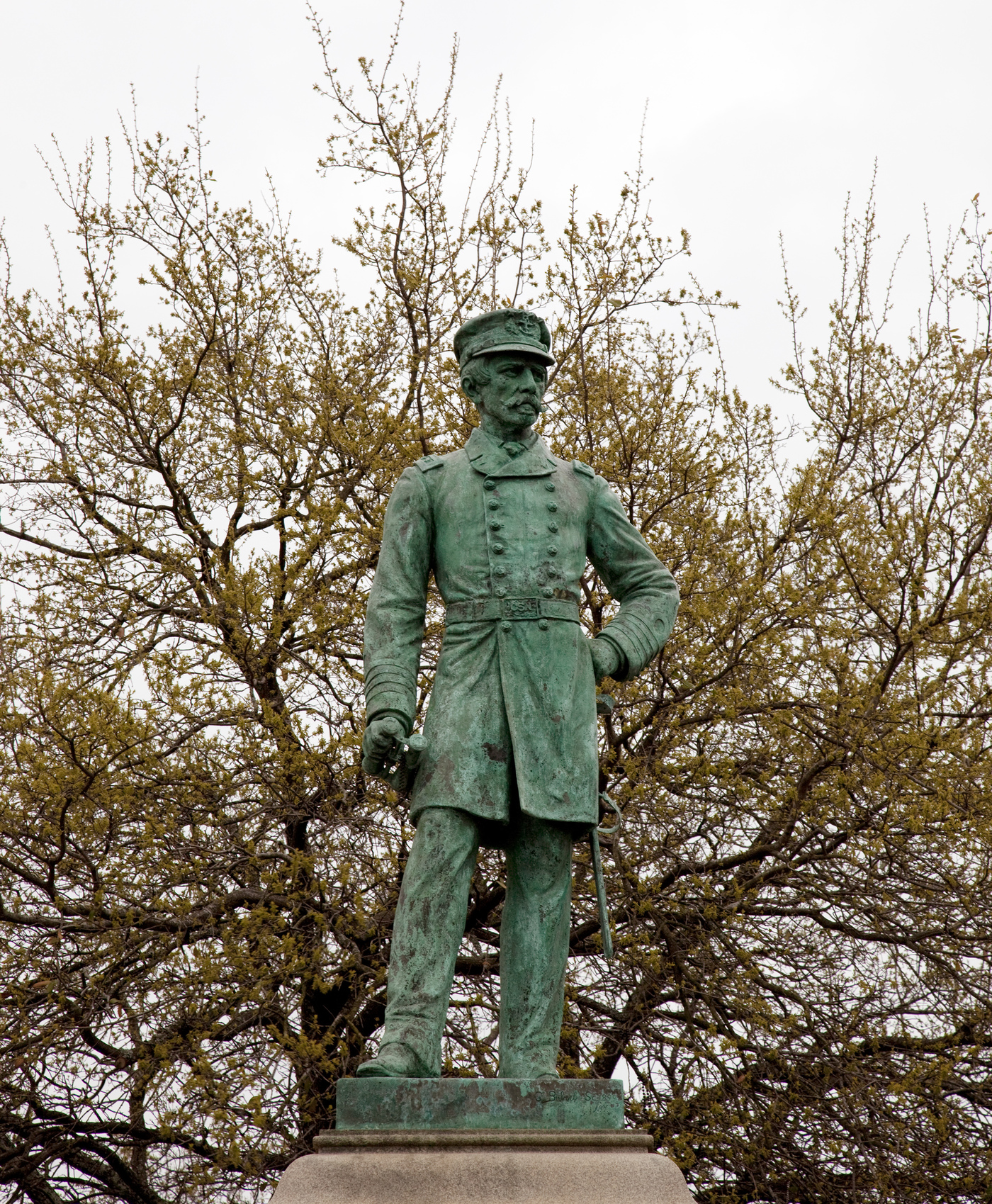 Now all that remains is the 120-year-old statue's massive granite pedestal and a commemorative plaque.

Revisiting Sacred Cows: Which Figures From History Do We Honor, And How?

Before Semmes fought for the Confederacy, he had been commended for service in the U.S. Navy in the Mexican-American war. The residents of Mobile wanted to honor his memory when the statue was first installed in 1900.

"Those statues aren't meant to offend anyone," Toifel says. "They're there to memorialize people."

Toifel is angry the city has moved the Semmes statue, and considers it a "cleansing" of American heritage.

"You can't say that taking these down doesn't erase history," Toifel says. "Absolutely it does."

That's not the way Mayor Sandy Stimpson sees it.

"We're not trying to erase the heritage," Stimpson says. He had the statue taken down in the dark of night last month after it was vandalized during racial justice protests.

"It had become a very divisive issue," Stimpson says. "If I'm really, truly trying to unify the community, I've got to figure out a way to either overcome it or do something differently."

So Stimpson, a white Republican mayor in a majority Black city, had the 8 and half foot statue of Semmes put in storage at the History Museum of Mobile. There, he says the Semmes statue can be redisplayed with historical context.

The move will cost the city $25,000, which is the fine for violating a 2017 state law designed to protect Confederate monuments. 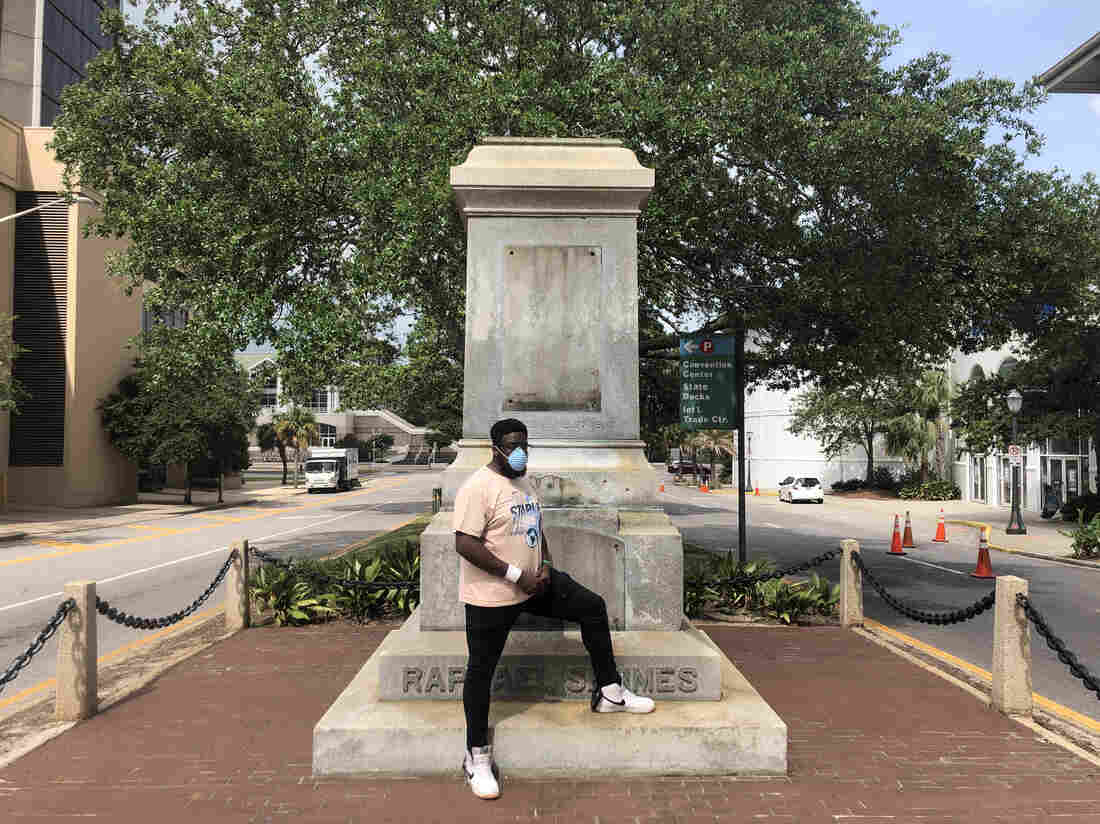 Protest organizer DAntjuan Miller stands by the granite pedestal that remains of a monument to Confederate Navy Adm. Raphael Semmes in Mobile, Ala. "It's like a weight that's lifted off now that it's gone," he says. Debbie Elliott/NPR hide caption 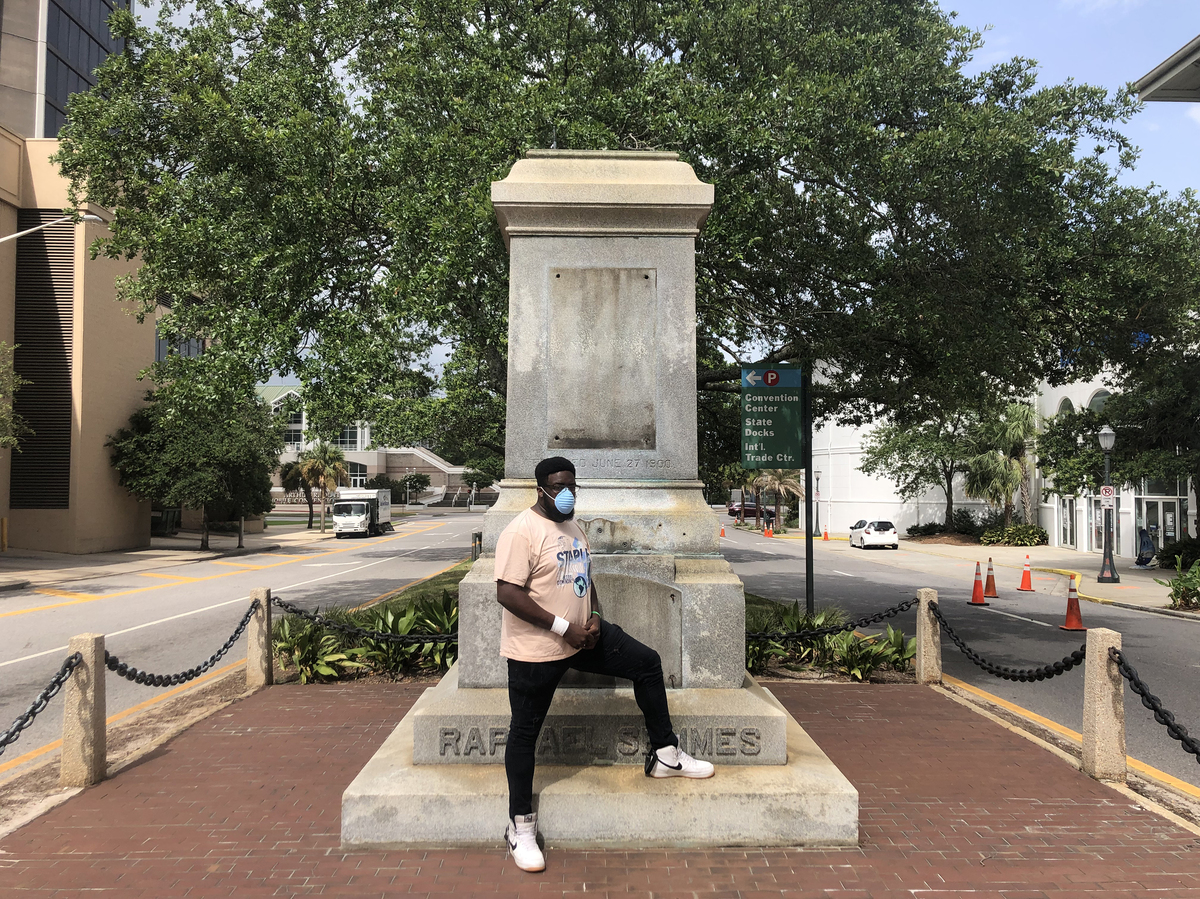 Protest organizer DAntjuan Miller stands by the granite pedestal that remains of a monument to Confederate Navy Adm. Raphael Semmes in Mobile, Ala. "It's like a weight that's lifted off now that it's gone," he says.

Confederate symbols are a flashpoint, one that President Trump sought to exploit this week when he bashed NASCAR for banning Confederate flags, and vowed to protect monuments. Even so, elected leaders in the former Dixie states are opting to remove Confederate memorials from the public square. Just today, the Confederate Soldiers and Sailors statue came down in Richmond.

Thirty Confederate symbols have been removed or relocated since George Floyd's death at the end of May, according to the Southern Poverty Law Center.

The last time the country saw a purge of relics of the Old South was in the aftermath of the Emanuel AME Church massacre in Charleston in 2015.

Back at the foot of Government Street in downtown Mobile, DAntjuan Miller, a 24-year-old Black man, looks up at the empty pedestal and sees a future for his generation in the city.

"Now that it's gone it makes me feel like we have hope," Miller says.

He helped organize the protests that had targeted the Semmes statue.

"That's just oppression. That's like having a weight on our backs," he says. "But it's like a weight lifted off now that it's gone."

Miller says a new South is rising with his generation, one that won't stand for racial bias.

The day after the Semmes statue came down, 21-year-old Jacob Lyons stood by the empty pedestal with a sign that read "Black Lives Matter; Not All Cops Are Bad; and Removing a 120-year-old Statue Just Doesn't Solve Racism."

"I think it causes more problems because Southern whites feel attacked and victimized," Lyons says. "They feel like white America is trying to be erased."

"You may feel that it's your history and I will agree with you that it is," says local attorney Karlos Finley. "But we've got to tell all of your history."

Finley is a municipal court judge who is president of the Dora Franklin Finley African-American Heritage Trail in Mobile. He says for too long the city has glorified one part of its story, but given short shrift to the rest.

"Many people want to think about, you know, the beautiful antebellum South and the charm of the oak trees and the southern gentleman and things of that nature," Finley says. "But we've got to take with that the fact that people were murdered and raped and held in bondage."

He's been active in trying to elevate the history of Africatown, a community in Mobile founded by the last enslaved people brought to U.S. shores in the slave ship the Clotilda. 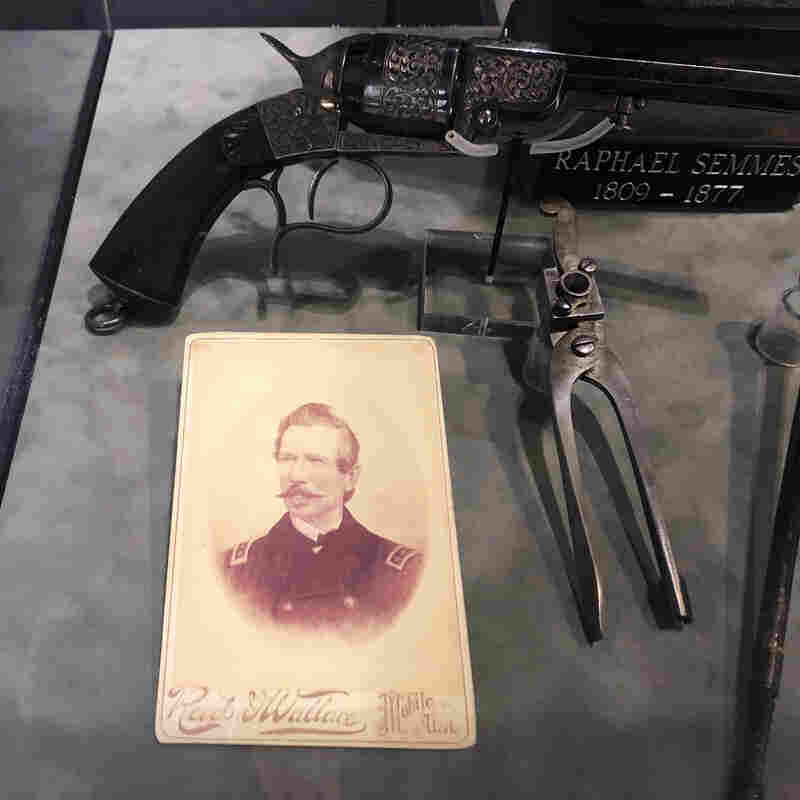 A photograph of Adm. Raphael Semmes on display with other artifacts at the History Museum of Mobile. A bronze statue of Semmes removed from prominent display in downtown Mobile has been moved to the museum where Mayor Sandy Stimpson says it can be interpreted with historical context. Debbie Elliott/NPR hide caption 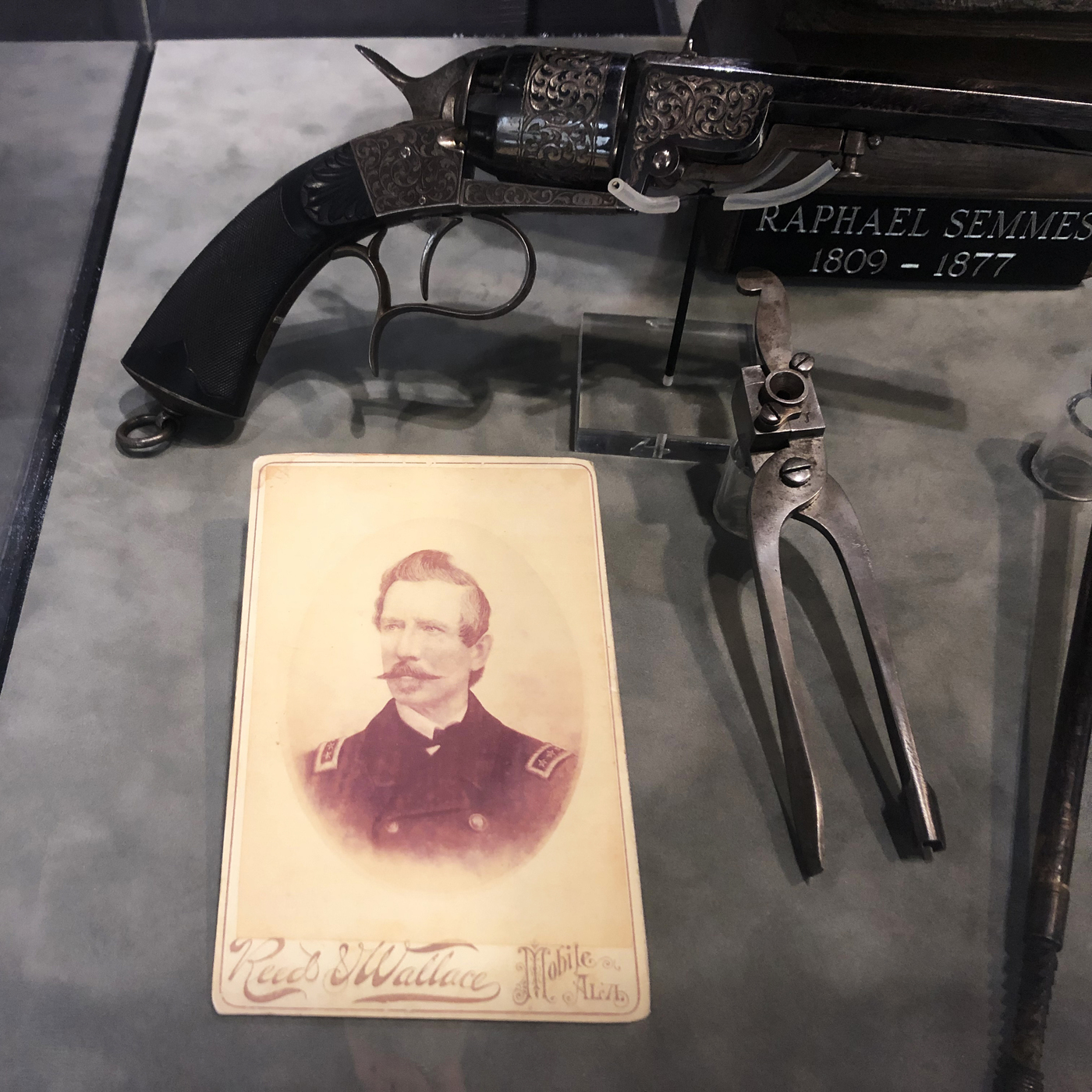 A photograph of Adm. Raphael Semmes on display with other artifacts at the History Museum of Mobile. A bronze statue of Semmes removed from prominent display in downtown Mobile has been moved to the museum where Mayor Sandy Stimpson says it can be interpreted with historical context.

Mobile History Museum Director Meg Fowler has been helping curate archives from the recently discovered shipwreck, and is now charged with interpreting the Raphael Semmes statue as well.

"Both the story of the Clotilda and the story of what we do with our monuments is about this moment of reckoning," Fowler says. "About understanding our past, putting proper context around our historical stories so that we can live into a future that is more just."

Members of the Sons of Confederate Veterans in Mobile are skeptical.

"History is not there for you to approve of," David Toifel says.

They want the city to give them the statue to display on private property. But that's unlikely. The city has put no timetable on reerecting Adm. Semmes in the museum, but intends to develop the future exhibition with input from the public.

Already, the debate has brought out the best and worst of Mobile, says local artist Soynita Edwards-Bush. She was part of a collaborative public art project to inscribe a temporary Black Lives Matter Mural on a downtown sidewalk in chalk.

"That day was a day that love won," Edwards-Bush says.

But she says soon, the social media pushback was fierce.

"One man said he was gonna piss on it, and one lady said she was going to raise hell," Edwards-Bush says. "All we put down was Black Lives Matter. If that notion, if those words alone bother you, you have some hate that you need to take care of."

Black Lives Matter is not a battle cry, she says, but an acknowledgement: "I just want you to simply understand that I'm Black. I'm here."