Accessibility links
Need 2 Minutes Of Calm? Inhale, Exhale ... And Click Here San Francisco's Asian Art Museum has been asking staffers to highlight favorite objects in the collection. Curator Forrest McGill chose the base of a hookah, made in 17th century India.

Sometimes it's good to be irrelevant. Too much relevance can get you down. Especially in these days of virus, economic pressures, racial discord. We need a break. In that spirit I offer something that has nothing — and as you'll see everything — to do with our turmoiled lives and times: 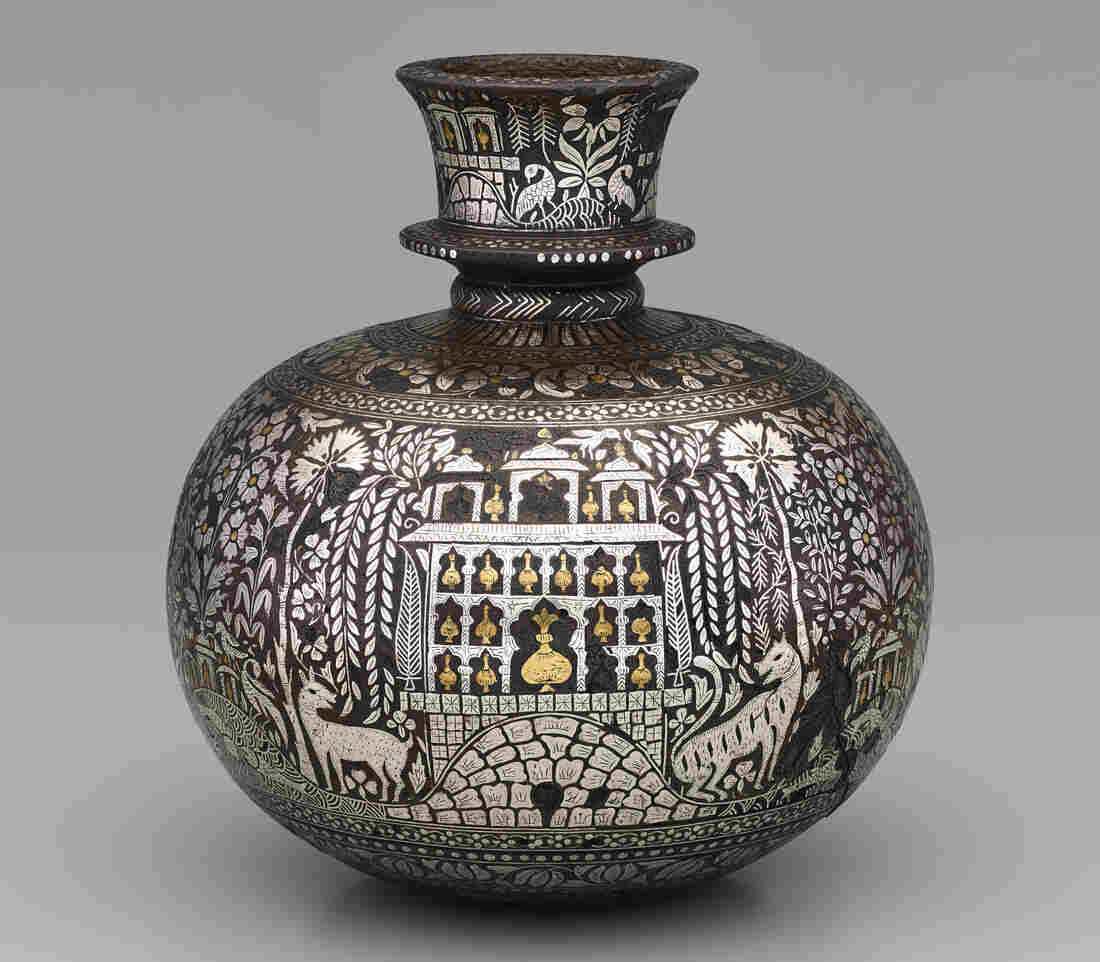 Looks like a beautiful old vase, right? Well, it is old — made in 17th century India — and beautiful. But it's not for holding flowers. It's the bottom of a rather elaborate construction designed to make its owner relaxed ... happier maybe ... anyway, zoned out.

It's the base of a hookah. A water pipe that can bring peace of mind after just a few puffs. Do yourself a favor. Watch the video below. It'll take less than a minute and a half. C'mon! You can spare that tiny bit of time to get calm.

See? So restful. I've watched it about six times, and ended up smiling each time.

The narrator, Forrest McGill, is a curator at the Asian Art Museum in San Francisco. Knowing the pandemic would close its doors, the museum asked him to pick a favorite object in their collection for an online video — something that, as he puts it, would let viewers "dream of a benign, well-ordered world."

McGill didn't want to choose something obvious — a Buddha, say. There are loads of Buddhas around. And so he selected the hookah base, with its inlays showing a Paradise Garden.

"Master metal workers transmuted silver, brass and zinc alloy into art for the centuries," McGill says. Benign wild animals — tiger, deer, peacocks — live there (I loved in the video the slow wagging of the tiger's tail, the way the deer nods his head.) "Even the wild beasts seem peaceful," McGill adds.

The museum's Creative Media Producer added soft music and bird sounds, and had the camera move at such a sloooow pace. You need to look at the video to see and hear all that. (I know, I'm nagging, but if you scrolled past the video above, I'll give you another chance and post it here a second time. Really. Press play this time.)

But the San Francisco Asian Art Museum's hookah base beats meditation for me. It's thought that the very first water-pipe base was made in an Islamic kingdom in south central India, not long after Portuguese traders brought the first tobacco to India. Smokers use flavored tobacco or marijuana — some stuff you could really get hooked on (one of NPR's brilliant librarians says "hooked on" doesn't come from hookah; I don't see why not).

Users need water, burning charcoal, a long hose with a mouthpiece. Pretty clouds of smoke come from the puffing. Also all kinds of health problems. So don't try it. Curator McGill never did. He's not a man who knows his hookahs, except intellectually. (These guys do, though, and I cannot recommend their online Hookah 101 class highly enough. Watch to the very end. Really.)

One more thing before I stop to look at the Asian Art Museum's hookah video yet again (and by the way, with all the meditative Asian objects inside, it's been decided that a bust of its founding donor, Avery Brundage, will be removed from the lobby. Brundage was revealed to be racist and anti-Semitic. So that storm in the eye of their calm).

Here's the last thing. I asked Forrest McGill what it is about so much Asian art that makes it so soothing. He demurred. The curator said he could put together an exhibition of Asian works that was as fierce as the serene ones. And to prove it, he sent this 2-inch treasure. 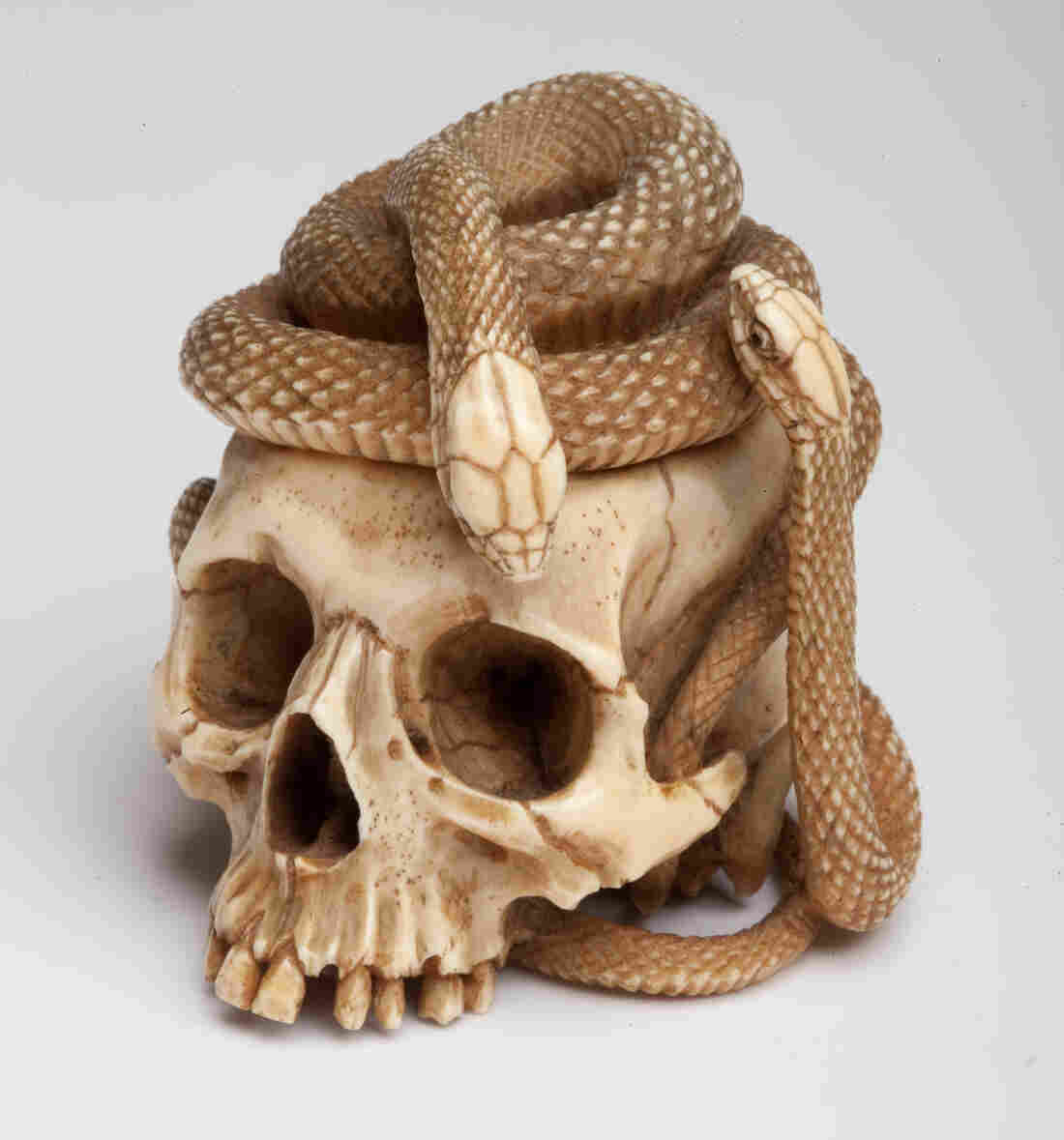 I'd opt for the hookah base. Definitely in the mood for an object that shows, in the curator's words, "nature and human culture in harmony. There's a vision to hold on to."