Accessibility links
Trump's Fortune Could Be In Jeopardy With Supreme Court Decision The Supreme Court's decision means President Trump's financial records will likely need to be turned over to a New York grand jury and could imperil his brand and fortune.

You Won't See Trump's Taxes Before Election Day, But He Could Face Bigger Problems

You Won't See Trump's Taxes Before Election Day, But He Could Face Bigger Problems 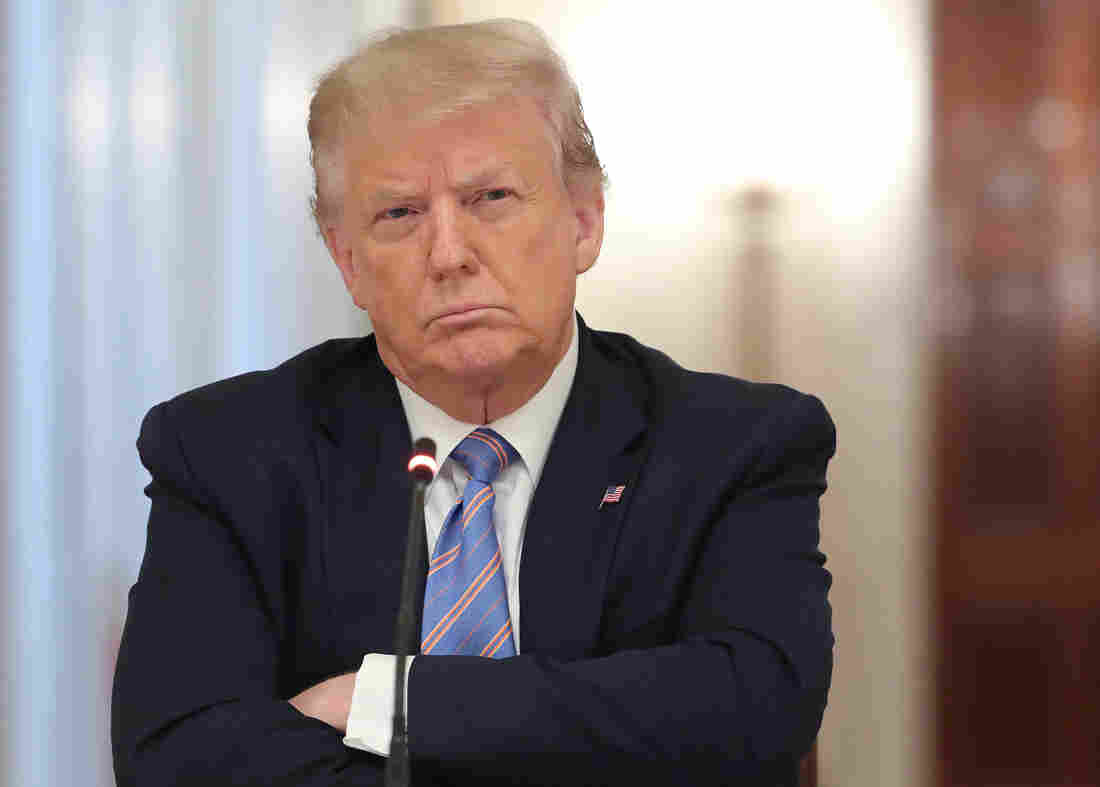 President Trump is not pleased with the Supreme Court's decision on Thursday that his financial records have to be turned over to a New York grand jury. Chip Somodevilla/Getty Images hide caption 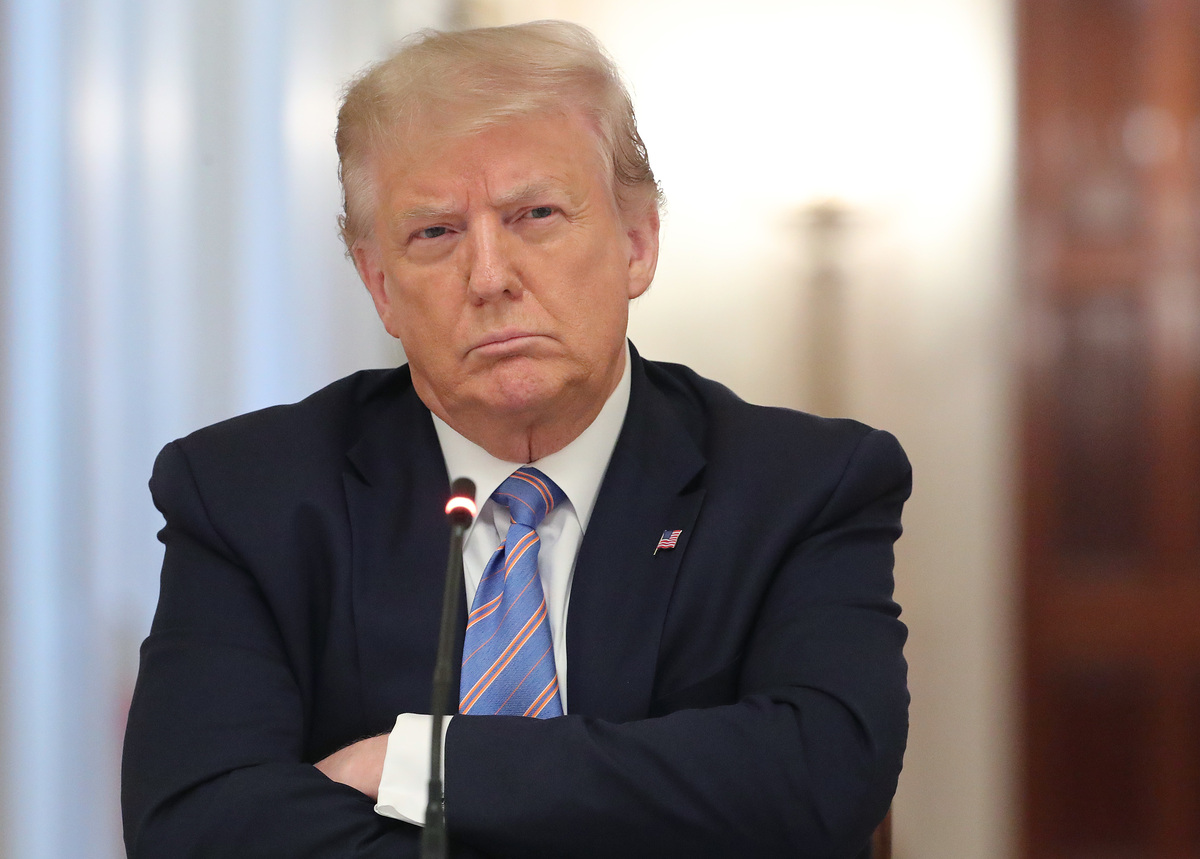 President Trump is not pleased with the Supreme Court's decision on Thursday that his financial records have to be turned over to a New York grand jury.

Supreme Court cases are complicated, and their implications can be muddy.

But a few things are clear from what the court decided Thursday about the President Trump's financial records. Presidents do not have absolute immunity from having to release financial records, and more specifically to Trump, we likely won't see his taxes until after the presidential election.

That, though, may be beside the point, because allowing a New York grand jury — and a motivated district attorney — to mine his records could jeopardize his brand, the fortune he built and even possibly his children, who work for the Trump Organization.

Here are some key questions answered about what the court decided and what it means politically.

Will I see Trump's taxes?

Maybe eventually, but not before the November presidential election. That's for a couple of reasons. Take the congressional case — the Supreme Court said that the case has to go back to the lower courts and that Congress has to better define what it is looking for from the president.

That could mean more hearings and appeals and the case eventually finding its way back to the Supreme Court. That would certainly not happen before November.

The other case involves a New York grand jury that is seeking Trump's financial records, including his taxes, from third parties, like banks and accountants, and not from the president directly.

Little is known about that New York investigation, led by New York County District Attorney Cyrus Vance. The only way Trump's taxes or other financial records would be made known to the public is if people were indicted, the case went to trial and the financial records were used as evidence. That would take months, if not longer.

Is this a win or loss for the president?

Overall, it's a big loss. Details of his financial dealings are likely to eventually be made public — something Trump has long tried to avoid.

Now, he and his allies could argue that it's not all bad, given that none of the information is likely to come out before November and, therefore, won't have an impact on his potential reelection.

But given the country's polarization, unless something provably criminal came out, it's probably unlikely that it would have had much impact on the presidential election anyway. But that may not be the point. (More on that below.)

After all, the Access Hollywood tape, which showed Trump engaged in a lewd conversation about women, came out in October 2016, and Trump still won. And when it comes to taxes, Trump has said before that it made him "smart" to figure out how not to pay them. His base has never abandoned him.

All that said, look at how Trump is reacting to what were big decisions from the court — and in a 7-to-2 manner — that, bottom line, said a president does not have categorical immunity to block a subpoena just because he's president.

Trump tweeted that it's "not fair" that he has "to keep fighting in a politically corrupt New York" and that, in the past, the court has given "broad deference" to presidents.

The Supreme Court sends case back to Lower Court, arguments to continue. This is all a political prosecution. I won the Mueller Witch Hunt, and others, and now I have to keep fighting in a politically corrupt New York. Not fair to this Presidency or Administration!

Setting the record straight, though: The high court has never said a president has immunity from all forms of subpoenas. While the Justice Department's Office of Legal Counsel has advised that a president should not be indicted while in office, the Supreme Court in U.S. v. Nixon forced the release of secret White House tape recordings that eventually led to Richard Nixon's resignation.

Do we know what the New York grand jury is investigating?

We don't know exactly what the grand jury is investigating — it's a secret. But it could be anything and everything related to Trump, the Trump Organization and people around him. That was made pretty clear by the reaction from Vance after the ruling.

"This is a tremendous victory for our nation's system of justice and its founding principle that no one — not even a president — is above the law," Vance said in a statement. "Our investigation, which was delayed for almost a year by this lawsuit, will resume, guided as always by the grand jury's solemn obligation to follow the law and the facts, wherever they may lead."

"Wherever they may lead" is pretty expansive and shows why Trump is so irritated by all of this.

Former Trump Lawyer Michael Cohen Is Back In Federal Prison

There are some clues from last year's congressional testimony from Trump's former lawyer and fixer, Michael Cohen.

"It was my experience that Mr. Trump inflated his total assets when it served his purposes, such as trying to be listed among the wealthiest people in Forbes, and deflated his assets to reduce his real estate taxes," Cohen said.

That's just one example. A mysterious $50 million loan for a project in Chicago is also under scrutiny.

With all that, whether this matters to the presidential election might be beside the point. His financial records being fully investigated has the potential to imperil the organization he built and the people who work for it, including himself — and his children.

Remember, Trump was already ordered last year to pay $2 million in damages for misuse of funds from his foundation, and it was in the process of dissolving because of that.

How does Biden try to leverage this?

Presumptive Democratic presidential nominee Joe Biden has already been trying to make this a matter of corruption and transparency.

It certainly helps blunt Trump's attacks on Biden for his son Hunter's role in sitting on an energy company board in Ukraine while Ukraine was part of Biden's portfolio as vice president.

Biden has gone after Trump on his taxes, pointing out that he himself has released 21 years of tax returns.

On Thursday, after the court's ruling, Biden tweeted that point again: "As I was saying."

As I was saying. https://t.co/NwOKjL0Zhj