Accessibility links
Review: 'The Old Guard' Is A Smart Blend Of Action And Emotion Director Gina Prince-Bythewood knocks it out of the park with a film about soldiers who fight (and fight and fight), based on a series of comics and starring Charlize Theron as the boss. 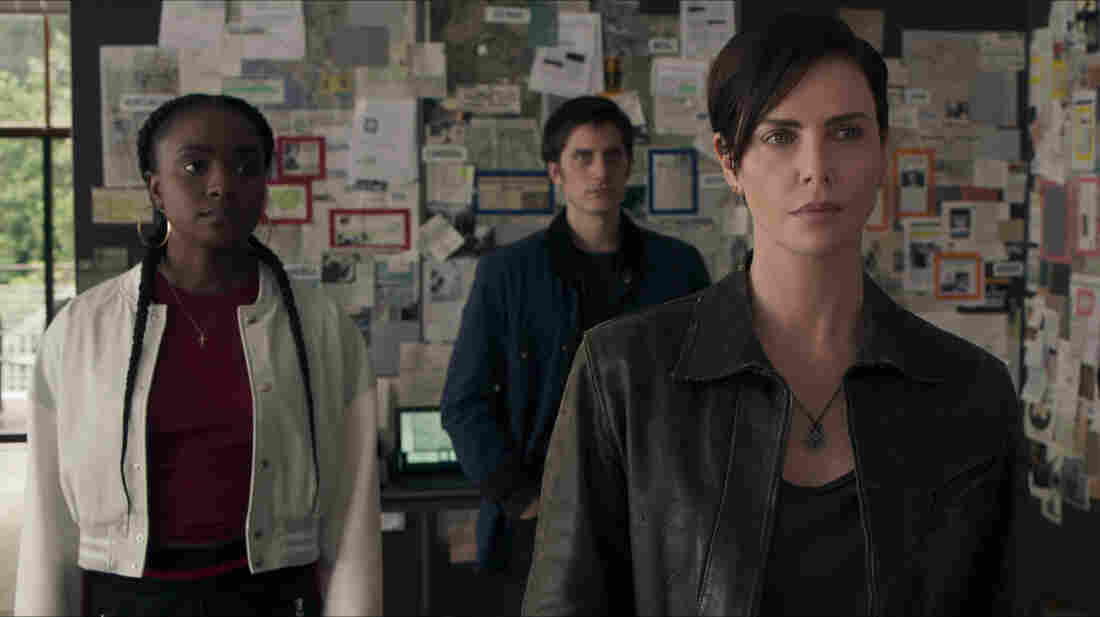 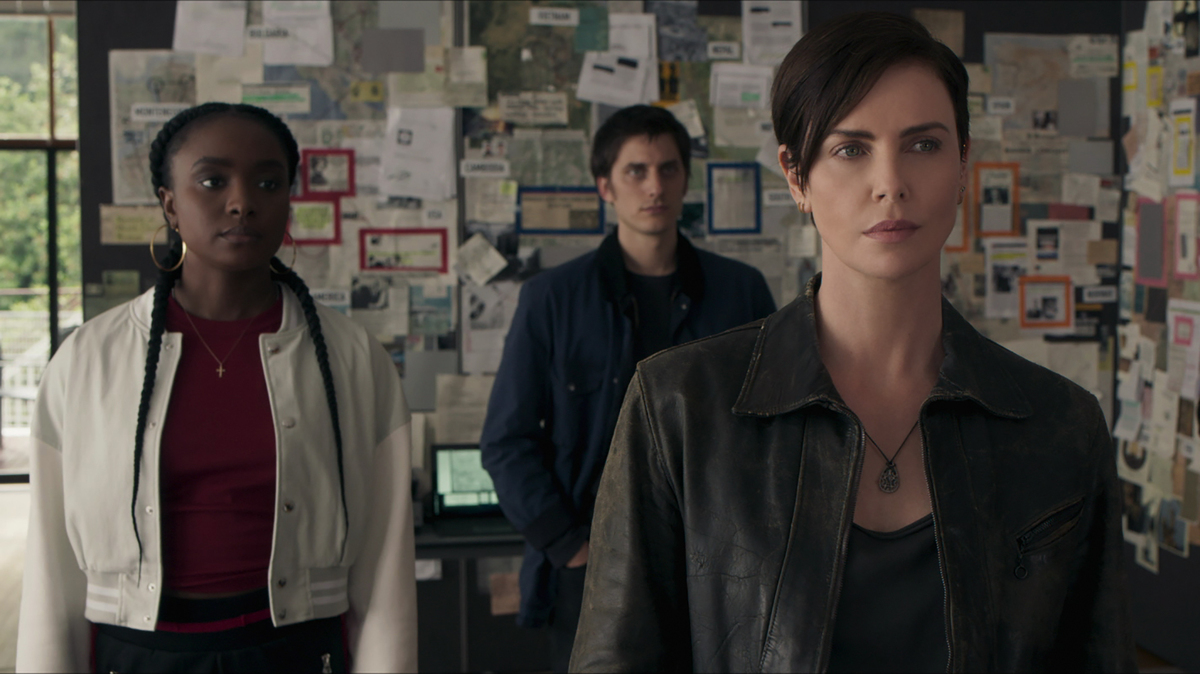 KiKi Layne, Luca Marinelli, Charlie Theron, and Marwan Kenzari are part of The Old Guard in Netflix's film of the same name.

There's a moment in the wonderful 2000 romance Love And Basketball when Monica and Quincy, college sweethearts who are both athletes, sit on a dorm-room bed together, recovering from their bruises. Their bodies are tangled and facing in opposite directions, with her hand holding ice on his belly and his holding ice on her ankle. The camera looks at the little drops of water on his skin and on hers, and we hear the crinkle of her bag of ice as she gently wiggles it back and forth. It's an extraordinary moment of intimacy, both because of the way it communicates the foundations of the relationship — its nurture and trust — and because of the way it displays the inherent vulnerability of bodies and what a critical part of humanity they represent.

Gina Prince-Bythewood wrote and directed that scene, and in the last 20 years she's directed television like Shots Fired and other films like Beyond The Lights. But this was the scene I kept coming back to while watching the very good Netflix action thriller The Old Guard, starring Charlize Theron, which Prince-Bythewood directed from a script by Greg Rucka, adapting the comics he created with artist Leandro Fernandez.

It might not be obvious, the connection between young lovers sprawled on a bed and a team of fighters against injustice. And particularly in this case, injured athletes aren't an obvious analogue because — and this is where I acknowledge that I am going to spoil the premise of the comics and the film — these are people who have lived many lifetimes, who cannot die. Or, rather, they die and they come back. Not just once, but over and over. For centuries; for longer.

Here's a quandary: How do you make a compelling movie — one with a good measure of fairly graphic violence, by the way — about a group of heroes who can't be killed? Don't they always have the upper hand? Won't they always win? There are clever ways that the story itself gets around this problem, but it's also absolutely critical that it's in the hands of a director who understands, and can convey on film, that link between physical vulnerability and humanity. Because one of the things this story is about is that even if you do not die, the pain of cycling through injury after injury, recovery after recovery, reconstitution after reconstitution of your being, is a hard way to exist.

It's a story that's partly about the attrition of your spirit that can come from being, very literally, a "survivor." And particularly because new recruit Nile (KiKi Layne, whom you know from If Beale Street Could Talk) is a black woman and two of her teammates are men who fell in love after being on opposite sides of The Crusades (which is a witty idea, let's be honest), there is additional subtext here about the churn of violence and the costs of enduring it. Moreover, in a world seized with emergencies that activists are scrambling to address, it is frustrating enough when you feel like years have passed and all the attempts you have made to improve the world have come to nothing. What would it be like to feel that for centuries? For longer? Would you really want the long view? How much perspective could you stand to have about humanity?

More immediately, the plot is this: Andy (Theron) has been doing this the longest. She wants out of the hero business, really, but she can't escape. She's pulled into a job with teammates Booker (Matthias Schoenaerts), Joe (Marwan Kenzari) and Nicky (Luca Marinelli). The job, conveyed to them by a man named Copley (Chiwetel Ejiofor) is to rescue a group of kidnapped girls in South Sudan. How can they say no? When it turns out there's more to the job than meets the eye, she's confronted by the fact that there are people out there who know about her and her team and wish them no good.

Meanwhile, in Afghanistan, Nile is a young soldier consumed with the wars of the present, and shortly after she discovers that something is very unusual about her response to injury, she winds up in the company of the Old Guard. (They don't go around calling themselves that, by the way; it would be very corny. And they don't do it.)

This is the first film I've seen in quarantine that felt to me like a proper big summer movie — and yet it transcends so much of what's sometimes been disappointing about that category. Yes, it's a comic book movie. Yes, it's an action movie. Yes, it's about a team of good-doers. And it's exciting and satisfying and tense and all those things. But everything from its queer couple to its leading women to its director to its thoughtfulness to its point of view about violence makes it such a welcome addition. So often, films accept the idea that slaughter — when a character believes it's righteous — comes easily and seems normal once the action realm has been entered. Here, no: Here, Nile is horrified by a sequence that would be just another set piece in so many movies. She's not excited the way Spider-Man is excited about joining the Avengers. She's coming to terms with a future she never asked for, and with the implications it has for the life she had before all this started.

There were moments in The Old Guard when I literally just muttered, "Gina Prince-Bythewood, man." Seriously. Because I have admired the way she shoots bodies in love scenes for ages; the way she makes skin seem warm and eyes seem lit from the inside. When I saw Beyond The Lights, I wrote that she had "an uncommonly fine touch when shooting not just sex but other scenes of physical contact and closeness, which give the film a sense of intimacy and gravity." As it turns out, that skill translates brilliantly to action, and the logic that someone who can shoot sex well can shoot action well should probably be followed more often. There's a moment when Nile is isolated, breathing deeply and listening to Frank Ocean in her earbuds, that reminded me keenly of Gugu Mbatha-Raw in Beyond The Lights, not just because they're both black women being filmed and seen in a tactile and radiant way black women often aren't in popular American film, but because the same director brings the same sense of vulnerable but durable physicality to both portrayals.

Not to be lost in this is how strong some of these performances are. This is a terrific deployment of the talents of Charlize Theron, sleek and knowing and fully in charge, swinging an axe and shooting a gun in a way that will satisfy anybody who secretly enjoys, just a little, those, "oooooh, yuck" moments in films like John Wick. (This is a pretty bloody movie. Please know that going in.) Layne is in a very different gear from the serene presence she was in Beale Street, but she's very good in this role that balances what we might call bad-assery with conscience and internal conflicts. Theron and Layne are also both funny together in the welcome moments of push and pull that are common to every story of the grizzled old veteran and the new recruit.

If you've got a big TV (or even a little one), there's plenty to watch; you know that. I know that. But if you miss the blockbuster and the star vehicle and the big action sequence, and if you want something that can be all those things while still having humanity and thought and a point of view, this is your film. And it comes from one of our great directors, who's been showing us for ages the cycle of injury and recovery, and who knows it will probably always be with us.