Accessibility links
Russia's GRU Is Suspected In Afghan Bounty Case Russian military intelligence, the GRU, is linked to the invasion of Ukraine and interference in the 2016 U.S. election. Now it's suspected of a bounty program to kill U.S. troops in Afghanistan. 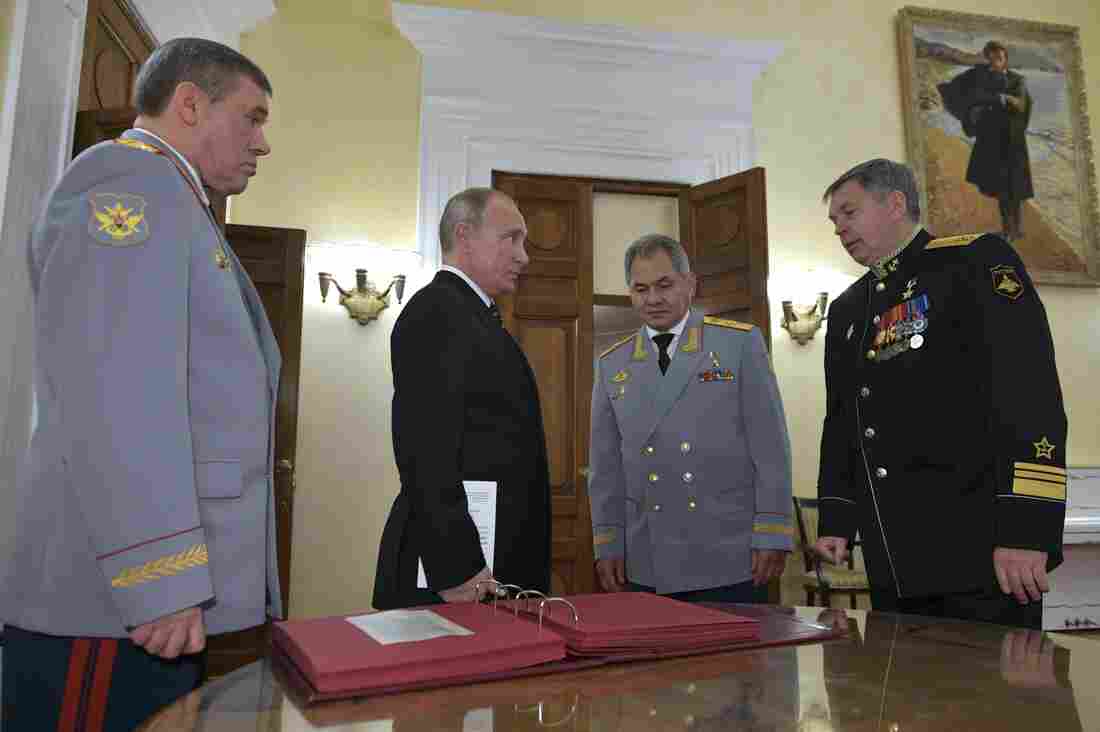 Russian President Vladimir Putin (second from left) meets military officials, including Igor Kostyukov (far right), the deputy chief of military intelligence for the GRU. The 2018 event in Moscow marked the centenary of the GRU, which has been involved in many major operations in recent years. U.S. intelligence suspects the GRU of involvement in a reported bounty program in Afghanistan. Alexei Druzhinin/Sputnik/Kremlin pool photo via AP hide caption 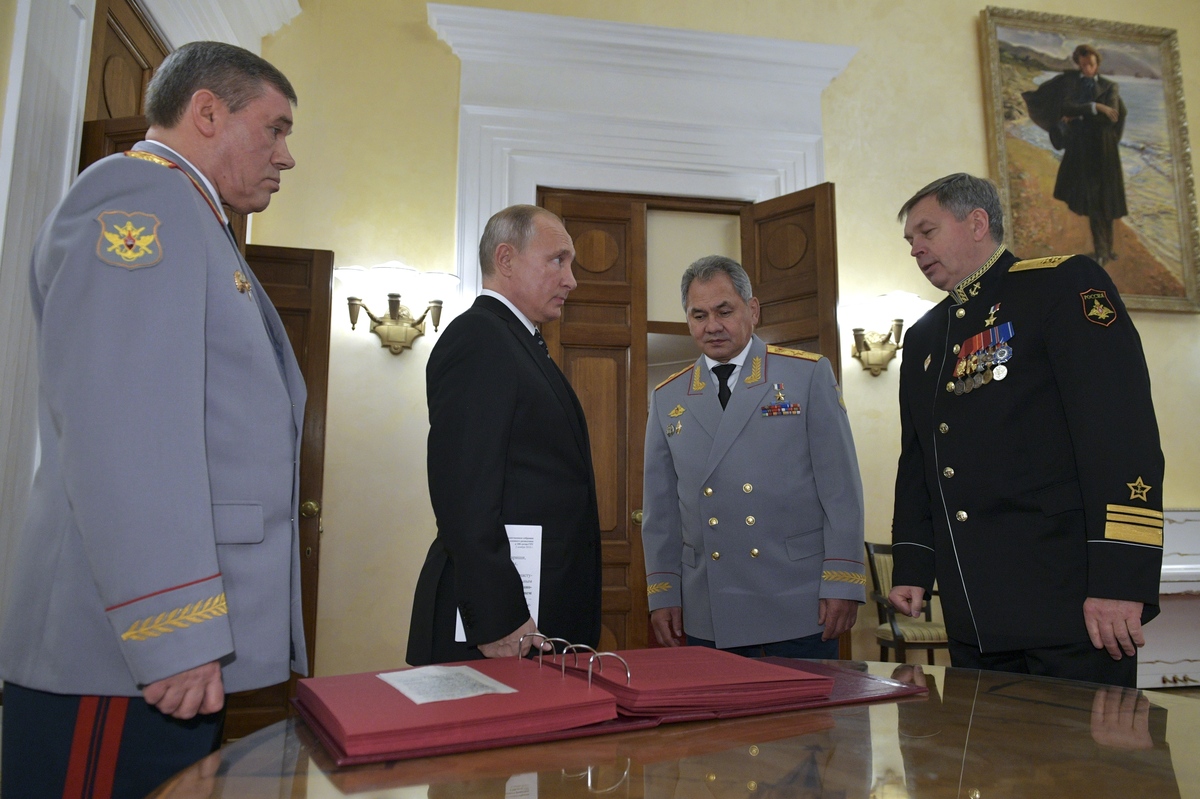 Russian President Vladimir Putin (second from left) meets military officials, including Igor Kostyukov (far right), the deputy chief of military intelligence for the GRU. The 2018 event in Moscow marked the centenary of the GRU, which has been involved in many major operations in recent years. U.S. intelligence suspects the GRU of involvement in a reported bounty program in Afghanistan.

Russian military intelligence, known as the GRU, was founded a century ago under the leadership of the revolutionary Leon Trotsky.

Only in recent years has it come to the fore with a series of brazen actions. They include Russia's military operations in Ukraine and Syria and the hack of Democratic Party emails in the 2016 U.S. election.

Now, U.S. intelligence views the GRU as the likely source of a suspected Russian bounty program to pay the Taliban to kill U.S. troops in Afghanistan.

"The GRU is known as the act-now, ask-questions-later service. They have more of a boots-on-the-ground kind of mentality," said Andrea Kendall-Taylor, a former CIA analyst who focused on Russia.

Kendall-Taylor, who's now at the Center for a New American Security in Washington, notes that Russian President Vladimir Putin worked for the most prominent spy agency, the KGB, before it was dismantled after the Soviet Union collapsed. Now, Putin often turns to the GRU.

"They have a much more aggressive and risk-taking culture, which is why I think we've seen Putin rely on the GRU," she added.

Help for the Taliban

U.S. and Afghan military officials say Russia has been assisting the Taliban with weapons and training for several years. Still, it would be considered a major escalation if the Russians actually set up a pay-to-kill bounty program.

"If you assume that the simplest description of what Russia is alleged to have done is the correct one, which is they are paying Afghan fighters specifically for killing American soldiers, then that is a departure from anything we've seen, certainly in the last 30 years," said Matthew Rojansky, a Russia expert who heads the Wilson Center's Kennan Institute in Washington.

The U.S. and Russia are often on opposite sides of a conflict but take steps to avoid direct confrontations. In the war in Syria, where U.S. and Russian forces are both present, the militaries have a "deconfliction hotline" so they don't accidentally shoot at each other.

Meanwhile, Russia says the U.S. is trying to portray Moscow as an all-purpose bogeyman.

"I would like to say officially that these allegations, distributed by the media, are downright lies. No concrete evidence has been presented," Russia's ambassador to the U.S., Anatoly Antonov, said this week in an online forum with the Center for the National Interest.

Other Russian officials have argued that Moscow would have little incentive to establish such a program and run the risk of getting caught, at a time when President Trump and many in the U.S. are looking to pull American troops out.

U.S. casualties in Afghanistan, which peaked at 496 deaths in 2010, have come down sharply since President Barack Obama formally ended combat operations in 2014. Four American soldiers have died from hostile fire in Afghanistan so far this year.

While U.S. intelligence assesses the Russian role in Afghanistan, U.S. officials say there's plenty of evidence of nefarious GRU activity on many other fronts.

To show how much information the U.S. gathered, the indictments included the full names, ranks, addresses and even the individual computers used by the GRU suspects.

Matthew Rojansky at the Wilson Center says it's important to keep the GRU in perspective.

"This is not the well-oiled machine that it would ideally be. There is tremendous internal competition between and among the Russian intelligence agencies," he said. "If you're trying to score points against a rival service, that's where you might get a little bit ahead of your skis. You take a risk and you'll either succeed or you'll fail."

Such operations reflect the dangerous downward spiral in U.S.-Russia relations, he says.

"The United States and Russia can negotiate some kinds of red lines with one another, some rules of the road for what is permissible and what's impermissible in this competition," he added.

The countries won't be friendly, or agree on much of anything, he said, but they need to repair a working relationship that's all but collapsed.

Greg Myre is an NPR national security correspondent who worked in Russia from 1996-99. Follow him @gregmyre1.