Accessibility links
Who Is Keisha Lance Bottoms? Atlanta Mayor On Biden VP List The first-term Atlanta mayor has spoken out against the state of Georgia's Republican-led pandemic response and spoken forcefully to protesters in her city. 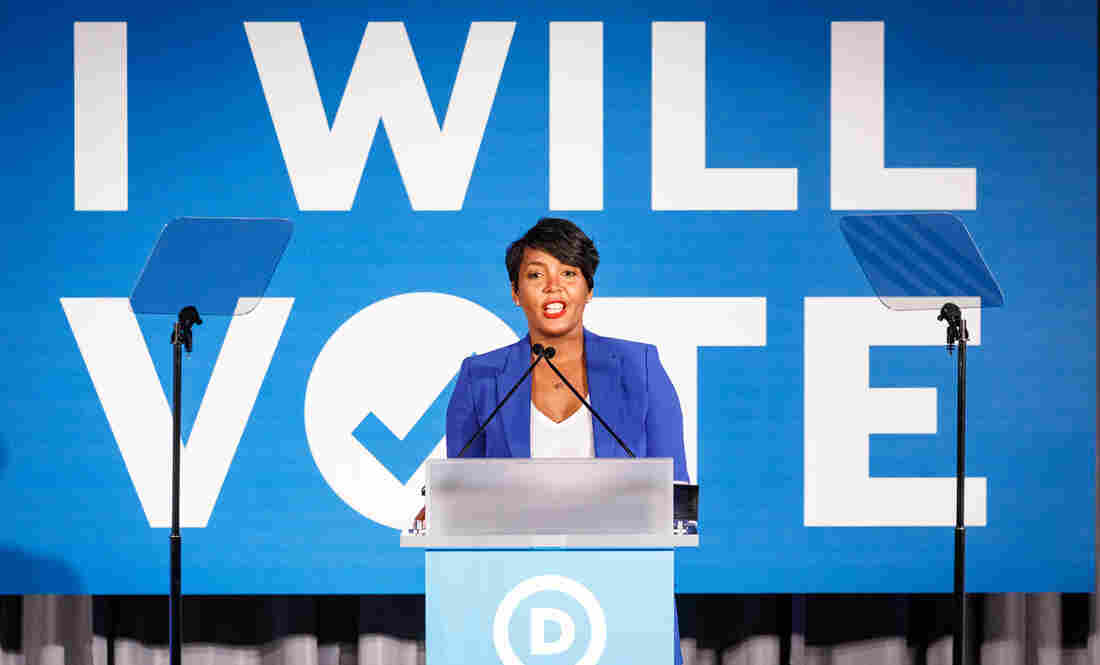 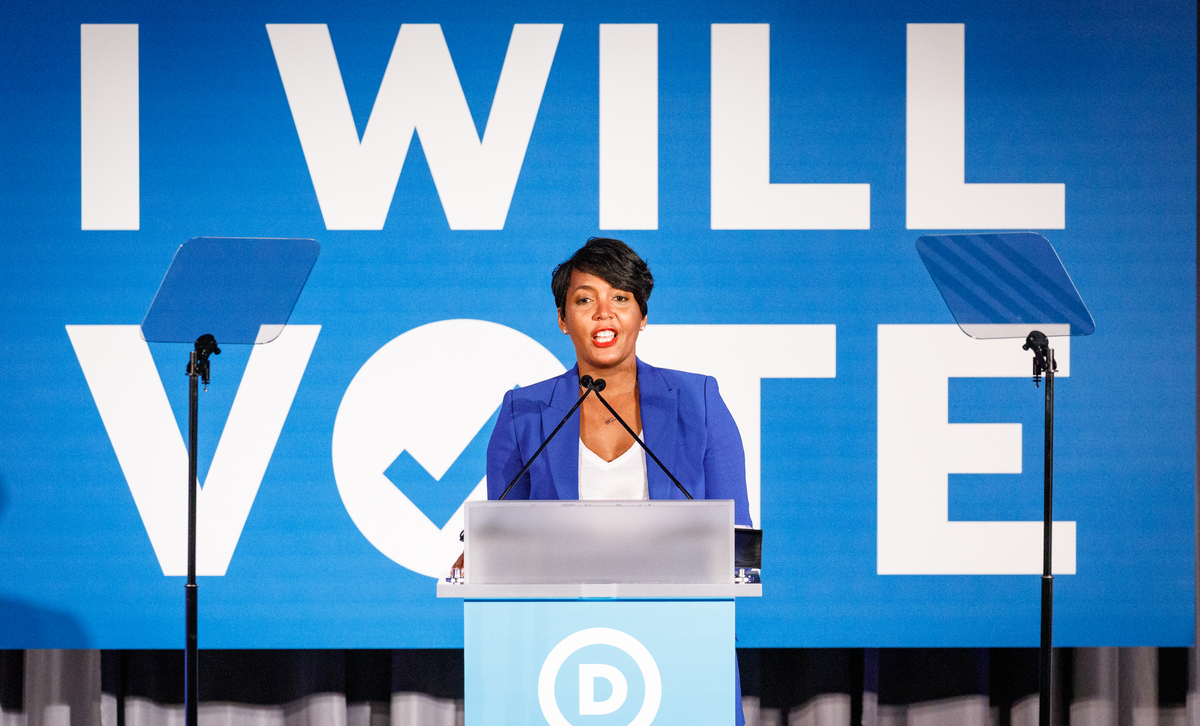 Atlanta Mayor Keisha Lance Bottoms, one of several candidates said to be under consideration as Joe Biden's presidential running mate, has seen her profile rise fast in recent weeks as the first-term mayor has spoken out against the state of Georgia's Republican-led pandemic response and spoken forcefully to protesters in her city.

Her early loyalty to the former vice president also stands out.

Bottoms endorsed Biden more than a year ago. "I think that this is not a conventional year," she said at a Democratic presidential debate in Atlanta in November. "In a conventional year, you wait. And you lick your finger and you stick it up, you see which way the wind is blowing. We don't have time for that this year."

She traveled the country stumping for Biden, arguing he is a "statesman" and the one to beat President Trump.

Tharon Johnson, an adviser to her mayoral campaign and the Southern regional director for Barack Obama's 2012 campaign, said Bottoms was with Biden "before it was cool to be."

"And she stayed committed to his campaign, even when it looked like his chance of being the nominee for the Democratic Party was bleak," Johnson said. "That's got to count for something."

Amid the pandemic, Bottoms has criticized Republican Gov. Brian Kemp's coronavirus response as he moved forward with the state's early reopening and more recently as he declined to issue a statewide mask ordinance. On Wednesday, Bottoms joined a handful of cities flouting that state decision and issued a mask mandate in Atlanta, even though Kemp's order technically supersedes local emergency action.

Her handling of protests in the wake of George Floyd's death has also put her in the spotlight. At a late-night May press conference after previously peaceful Atlanta protesters had begun destroying buildings, Bottoms pleaded with them to "go home."

"If you care about this city, then go home," she said forcefully. "If you want change in America, go and register to vote. ... You are disgracing our city. You are disgracing the life of George Floyd and every other person who has been killed in this country."

Bottoms, a mother of four children, said she thinks the message resonated because Atlanta has led on social justice issues going back to the Rev. Martin Luther King Jr. — and because she speaks from personal experience.

Bottoms grew up as the daughter of a famous singer, Major Lance. But he ended up serving three years in prison for selling and possessing cocaine, and her mother struggled to support the family and keep a small business afloat in Atlanta.

She was a lawyer, then served as a magistrate judge and on the Atlanta City Council for two terms before winning the mayoral race in 2017.

Former adviser Johnson said Bottoms' relatability, drawn from her range of life experiences, is the key to her success. "I think she's just a Black woman who understands what it feels like to be middle class but also poor in Atlanta."

He also pointed to the way she announced her positive coronavirus test this week.

"She could have easily been selfish and not told anyone and tried to cover it up," Johnson said. "But what did she do? She came out and said, 'Look, it's hit home and I want people to know that this pandemic is real.' "

Atlanta "is not out of control"

While her messages to protesters have landed well, some have questioned whether she remains in control of the city, particularly after another wave of unrest following the officer-involved killing of Rayshard Brooks in Atlanta. Nearly 200 police officers called out sick, though city leaders were quick to clarify the department remained able to stay properly staffed.

Last weekend the city saw a spate of shootings, including the killing of 8-year-old Secoriea Turner, prompting another emotional press conference.

In an interview, Bottoms asserted Atlanta "is not out of control. And in fact, our crime numbers are even lower than they were this time last year," she said. "That being said, when people are being killed, and we see the number of people who were shot and killed in our city over a weekend period, that is a problem."

"Violence is a result of a whole bunch of other stuff that comes before that moment in time before someone opens fire on our streets," she said. "It's concerning; it should be concerning to all of us who call Atlanta home, and we will continue to focus on it." 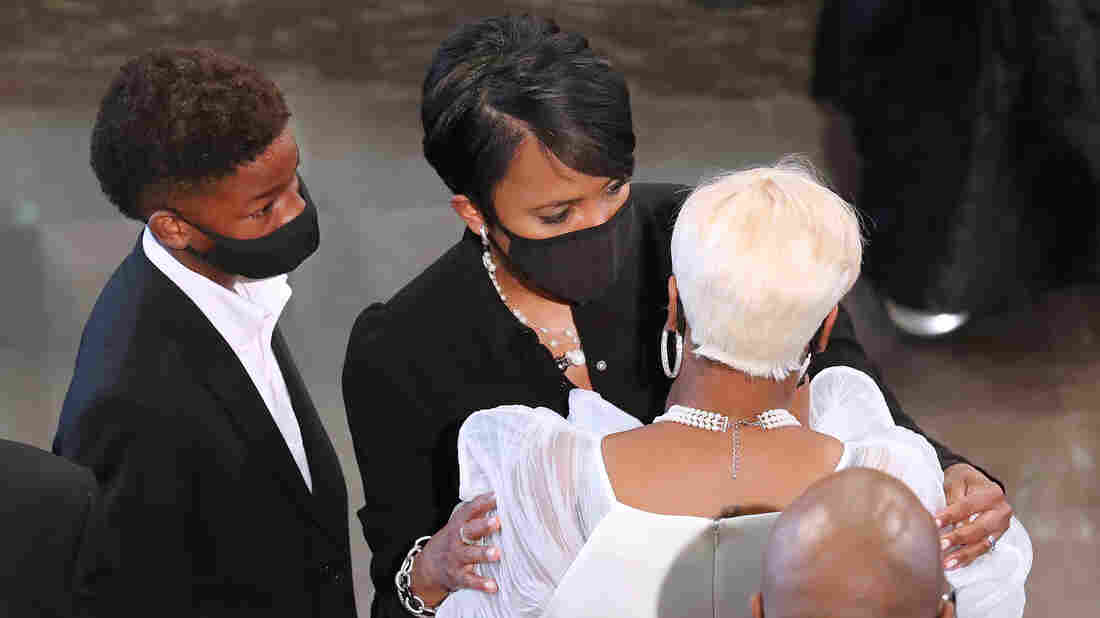 Bottoms consoles Tomika Miller, the wife of Rayshard Brooks, at the conclusion of his June 23 funeral at Ebenezer Baptist Church in Atlanta. Brooks, 27, died June 12 after an officer shot him in a Wendy's parking lot. Curtis Compton/Pool/Getty Images hide caption 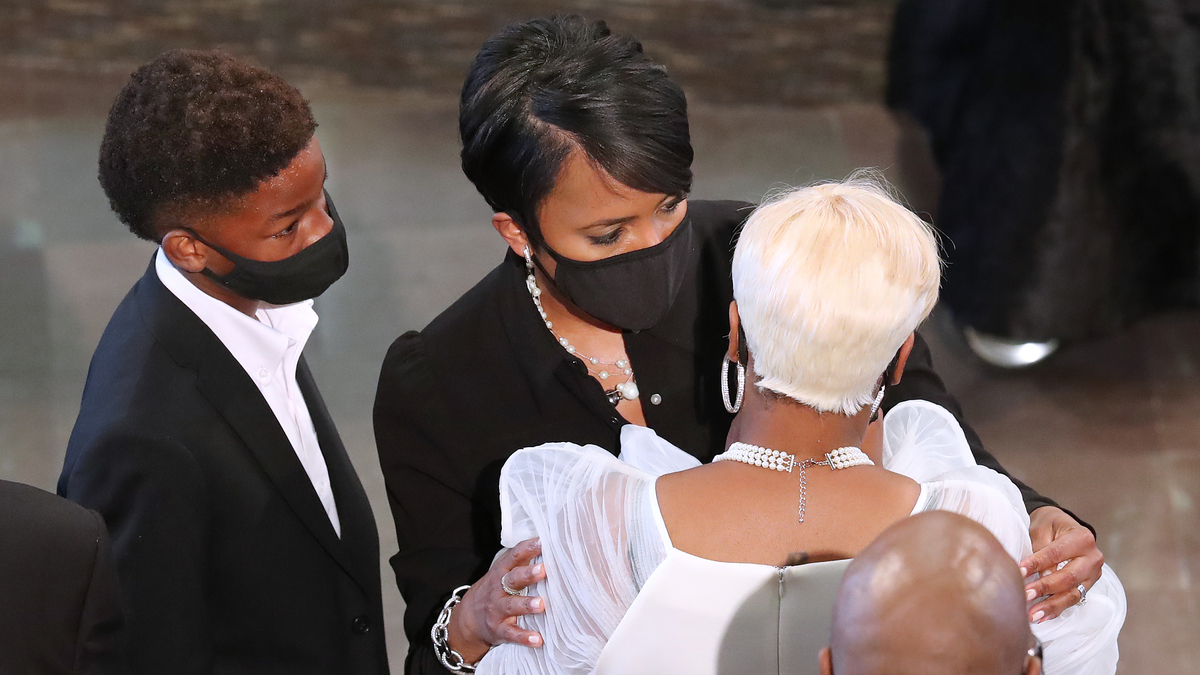 Bottoms consoles Tomika Miller, the wife of Rayshard Brooks, at the conclusion of his June 23 funeral at Ebenezer Baptist Church in Atlanta. Brooks, 27, died June 12 after an officer shot him in a Wendy's parking lot.

Like Biden, Bottoms has steered clear of the "defund the police" push. Her administration's new budget dedicates about a third of city funding to the police; it instead reallocates corrections money to social services.

Greer argued Bottoms' two-plus-year administration has not been able to change the status quo in a city plagued by what by one estimate is the greatest income inequality in the country, and that the administration's recent criminal justice reforms in the wake of protests have not gone far enough to make real change. The mayor signed a series of executive orders related to use of force reform and transparency, calling it part of a "top-to-bottom review of how we police in Atlanta."

But police are still not bound by any recommendations of the Atlanta Citizen Review Board, Greer pointed out. "There's a thought process that she's a progressive mayor, but that doesn't add up with the policies," Greer said.

"But when people don't feel as if we're moving the needle, then obviously perception is everything. But it's happening and it's getting better. But with so many systemic issues, and challenges that we have, it just can't happen soon enough." 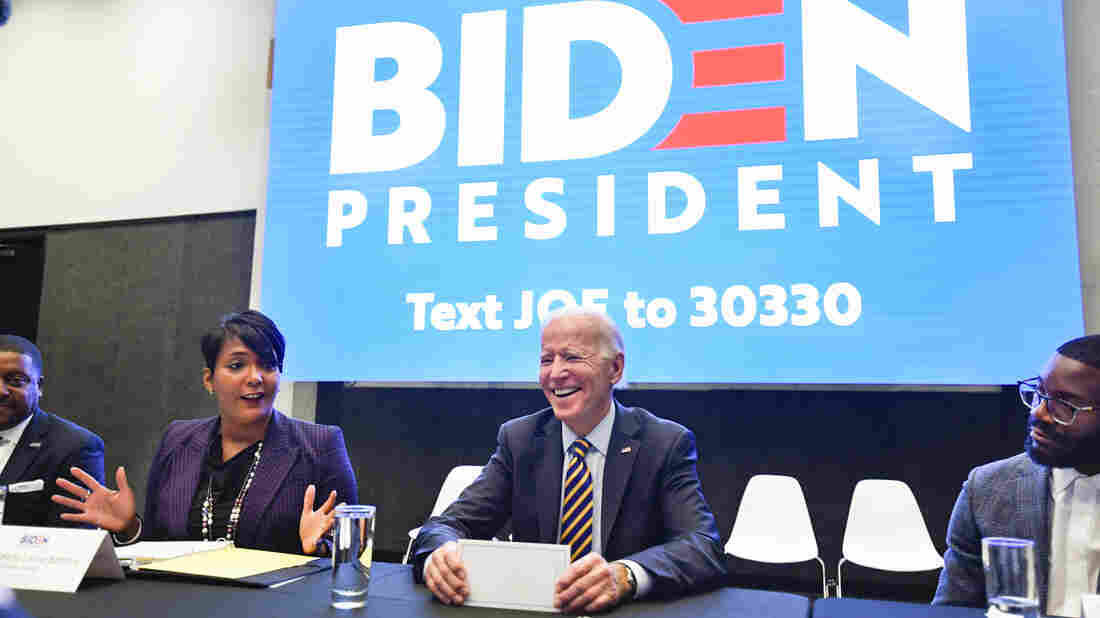 Joe Biden reacts as Bottoms introduces him during an assembly of Black Southern mayors in November in Atlanta. John Amis/AP hide caption 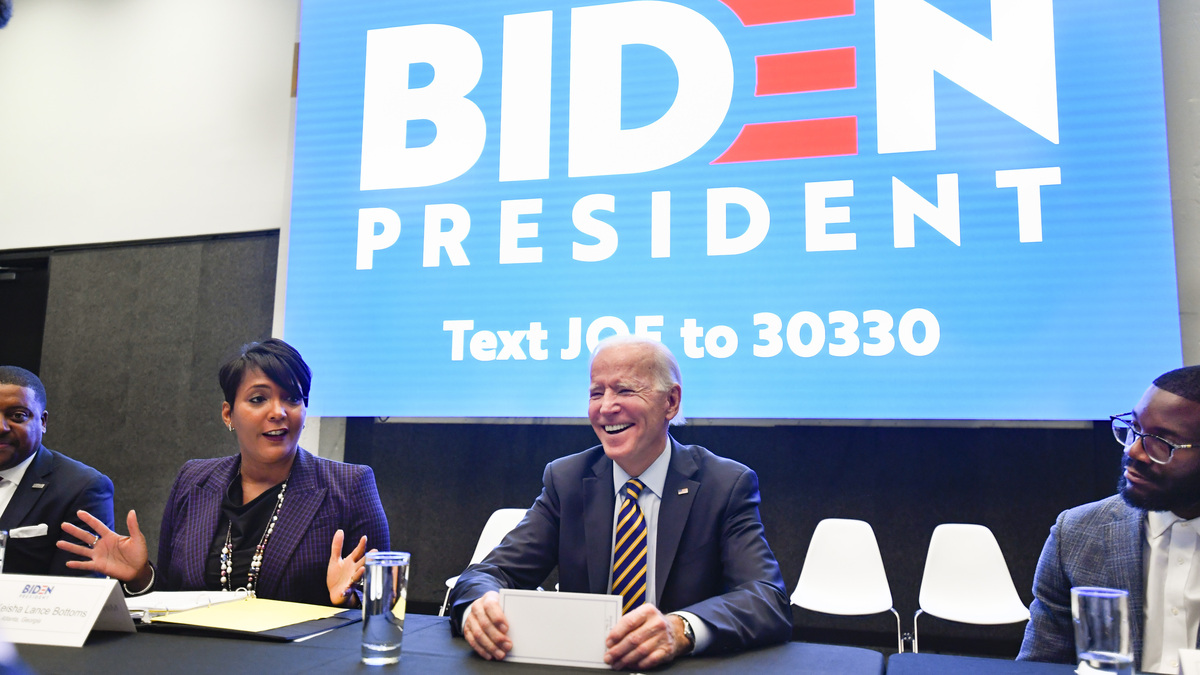 Joe Biden reacts as Bottoms introduces him during an assembly of Black Southern mayors in November in Atlanta.

To the question of whether Bottoms thinks she's qualified to be a vice presidential candidate, or to hold another national role, she said yes: "When you are leading a major city, you are dealing with a number of issues all at once; you're dealing with the same issues that we're seeing across this country."

Johnson, the adviser, agrees that Bottoms fits the bill — that the problems she's dealing with at the local level are relevant nationally.

"This is a woman who is waking up every day, not only dealing with a national pandemic, but she is dealing with one of the core issues that we've got to solve," he said. "And that is, how do we make sure that people understand that Black lives matter? But we also need to figure out, how do we reform our police department so they can actually get the support that they need?"

She's also proven she's a "fighter," Johnson said, like Biden. "She's definitely proven that she's not one that will shy away from problems," he said. "And I think that she's a person that can develop relationships all across the country."

Bottoms said while she knows people will keep talking about the vice presidential rumors, "I'm continuing to focus on the job that I have before me, and that's leading our city during some very unprecedented times."