Accessibility links
Hamilton, In Fiction And History, Is Key To Understanding The Electoral College When the Supreme Court ruled this week on "faithless electors," Alexander Hamilton's name appeared five times. But the story is a little more complicated than that told by the Broadway show.

Hamilton, In Fiction And History, Is Key To Understanding The Electoral College

Hamilton, In Fiction And History, Is Key To Understanding The Electoral College 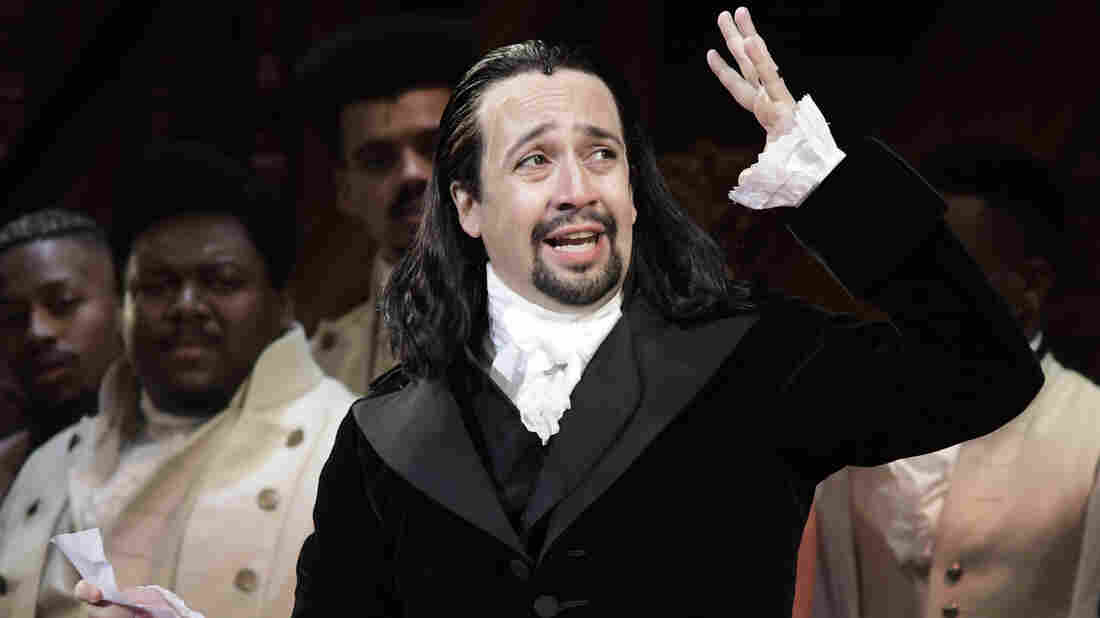 Lin-Manuel Miranda is the composer and creator of the award-winning Broadway musical Hamilton. History's Alexander Hamilton was at the center of the push to create an Electoral College. Carlos Giusti/AP hide caption 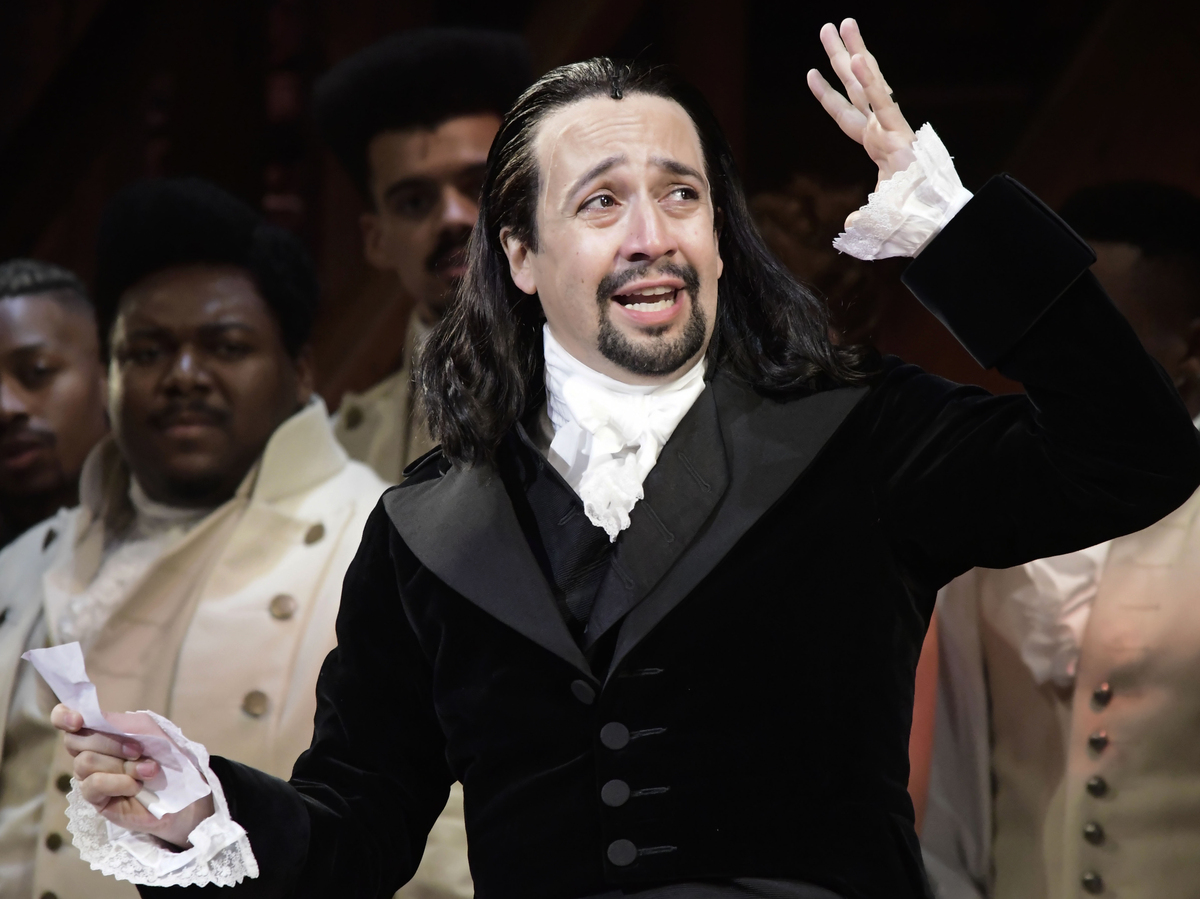 Lin-Manuel Miranda is the composer and creator of the award-winning Broadway musical Hamilton. History's Alexander Hamilton was at the center of the push to create an Electoral College.

The high court decided not only that states can require electors to follow the will of the popular vote within their states — but also that they can penalize or replace electors who fail to do so. The court's vote was unanimous.

But the larger, basic question remains: Why do we have an Electoral College choose the president at all? We know how many electoral votes each state has — equal to its seats in Congress — and we usually do the math on election night.

So why make 538 electors traipse to their state capitols some weeks later to cast these votes and make it official?

Or for that matter, why not simply total up the national popular vote for this national office and swear in the national winner?

The answer goes back to the Constitution, of course, and to one particular "ten-dollar Founding Father" at the center of a Pulitzer Prize-winning Broadway musical.

Just by coincidence, Hamilton was in the news over the holiday weekend, as Disney+ began streaming a recorded performance by the original cast.

Alexander Hamilton's name appears five times in the written opinions of the court in this week's decision on "faithless electors," befitting his new pop status as well as his role in creating the Electoral College.

'Hamilton' Comes Home, Just In Time For The Fourth Of July

Writing for the court, Justice Elena Kagan refers to one scene in the musical that depicts the presidential election of 1800 and the tie vote in the electoral college between Thomas Jefferson and Aaron Burr.

Loud turmoil on stage suggests the threats of secession and armed confrontation that surrounded the counting of those momentous votes.

Suddenly, the cast members fall silent as Hamilton appears on a balcony above. They look up to him as he expresses his anguished default preference for Jefferson, and the question is resolved.

Here, the show's author and star, Lin-Manuel Miranda, was exercising some artistic license. The vote that made Jefferson president actually took place in the House of Representatives in the new Capitol, which was still under construction.

Hamilton was not a member of that body and, in fact, never came to Washington. However, his involvement behind the scenes was important to Burr's defeat, as Kagan suggests.

"Alexander Hamilton secured his place on the Broadway stage — but possibly in the cemetery too — by lobbying Federalists in the House to tip the election to Jefferson, whom he loathed but viewed as less of an existential threat to the republic," she wrote.

Kagan's mordant mention of the cemetery alludes to the ultimate end of Hamilton's relationship with Burr, which came when Burr fatally shot Hamilton a few years later in the most famous duel in American history.

Promoter of the college

Hamilton's word meant something in an election dispute in 1800 and 1801 in part because he had promoted and defended the idea of the Electoral College, when he was a delegate to the Constitutional Convention in Philadelphia and in the fight to ratify it.

It was part of the marathon presentation Hamilton made in June 1787, just a few weeks after the convention began. In the Broadway show, Miranda's script includes a passing reference to the six-hour length of this speech but does not dwell on the content, which might not play well with contemporary audiences.

Hamilton's construct of a new state reflected his deep distrust of popular voting.

"It was also peculiarly desirable to afford as little opportunity as possible to tumult and disorder," the real Hamilton wrote, referring to the "mischief" that might done among the general electorate.

Those phrases appeared in an essay Hamilton wrote nearly a year later, part of a series urging ratification of the Constitution. It was No. 68 in the collection published as The Federalist.

"The sense of the people" should be part of the process, Hamilton wrote. But it would be taken as an "advisement" by the Electoral College, composed of "men most capable of analyzing the qualities" needed for the supreme office, educated and discerning gentlemen who would meet "under circumstances favorable to deliberation."

A more elitist perspective is hard to imagine.

In Philadelphia in 1787, Hamilton had studied the main competing plans under consideration for structuring the new federal government. One emphasized the power of the states, the other a strong central government. Hamilton favored the latter but wanted it to go further. Much further.

In his vision, the ordinary voters — meaning, at that time, only males with property — would choose members of the House and vote for the first of two tiers of an Electoral College.

"It was the most radical plan introduced at the Constitutional Convention, and while many liked what they heard, all knew [it] was too impolitic to win ratification," notes historian John Ferling in his book Jefferson and Hamilton.

Hamilton's overall schema may have been too much like a monarchy for post-Revolutionary America, but the Electoral College idea survived. In part, it did so because other convention delegates liked the idea of a buffer between the popular vote and the ultimate office.

It also piggybacked on the political appeal of the so-called Great Compromise, which gave the populous states more seats in the House but gave all states two seats in the Senate.

The Electoral College duplicates that arrangement, giving disproportionate effect to the votes cast in less populous states. One result of the system is that Wyoming has one elector per 190,000 residents, roughly speaking, while California gets one for each 700,000.

That has made the Electoral College controversial from its inception, but it has also won the support of many champions of the less populous states.

It has also driven the final outcome of the 2000 and 2016 elections, when the Electoral College reversed the result of the national popular vote. Both times, the beneficiary was a Republican generally favored by the more sparsely populated parts of the country.

The language on this issue was adjusted by amendment in 1804 after the nightmare of the Jefferson-Burr tie. But the the closest Congress has come to amending the Electoral College since came in 1969, when a proposal for direct popular election of the president, with a runoff if no candidate got more than 40% of the vote, was approved by two-thirds in the House but failed in the Senate.

It still would have needed to be ratified by three-fourths of the states, which was as unlikely to happen then as it is now.

In recent years, the Electoral College has come to be regarded as not only an artifact of constitutional conservatism but also as a bulwark against changing voter demographics. And in that sense, it is more a partisan flashpoint than ever.