Accessibility links
Start Here: Your Guide To Getting Into K-Pop Korean pop's near-total global ubiquity may be intimidating for the uninitiated, but getting into the music shouldn't be. Our introduction includes tracks by H.O.T., Girls Generation, BTS and more. 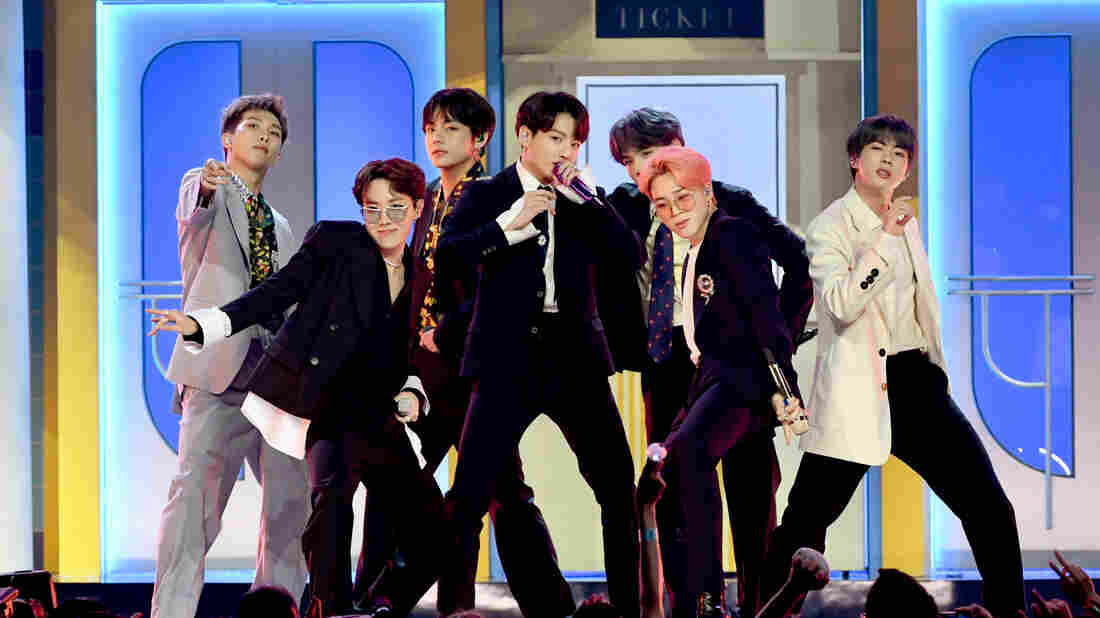 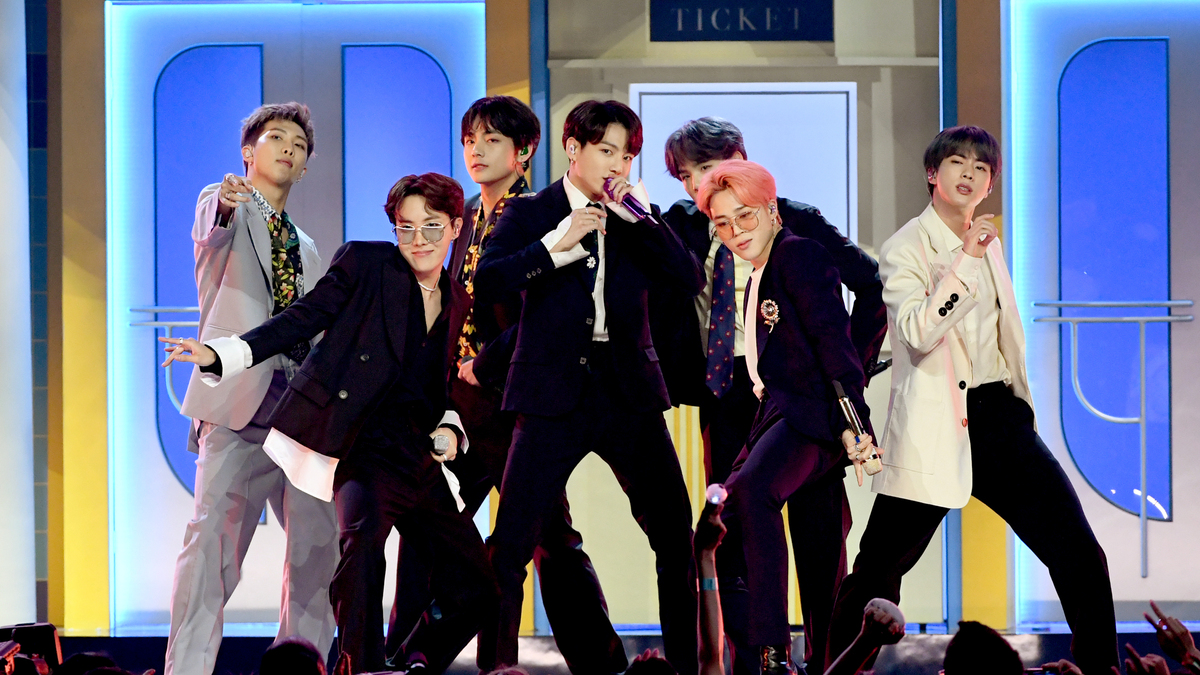 A song by the K-pop group BTS, shown here performing during the 2019 Billboard Music Awards, is included in our starter kit.

The last half-decade of Western pop music has been dominated by whisper-singing: a deliberately dry, almost ASMR-like performance style popularized by the likes of major label "indie pop" artists Julia Michaels, Selena Gomez, Lana Del Rey and Billie Eilish. The sound is hushed and pacifying, a response to the chaos of the world, the millennial's music equivalent to minimalistic interior design — why belt when you could soothe?

K-pop idol music, meanwhile, took hold in the United States during the exact same era, and it was the opposite: a maximalist dreamland full of color, high concept-performances and videos, a plethora of performers and unrivaled choreography. If Top 40 in America wanted solo singers so soft every breath was caught on mic over a mid-tempo chorus, K-pop appeared to offer a genre-less alternative: constant stimulation, euphoria delivered in eight to 10 melodies and fantastical harmonies in a single track. (That is, K-pop idol music— in the West, "K-pop" is frequently used synonymously with Korean idol music, pop with a high-production value and produced in a deliberate studio system, as it is in this piece.)

K-pop is music that is stuffed but never bloated; music that is fun and meant to elicit joy when listened to and seen (K-pop is designed to be enjoyed visually as much, if not more, than it is meant to be heard). And it is music that is now nearing total global ubiquity. Boy band BTS is the most popular group on the planet, bringing in billions to South Korea each year between No. 1 albums (three of which hit that particular benchmark in less than a year,) history-making late-night television performances and music videos that double as art films. K-pop fans themselves have dominated headlines in and outside of the pop culture arena for their recent political successes: using their digital native understanding to overwhelm white supremacist hashtags, crashing President Trump's Tulsa rally attendance numbers and police apps meant to solicit information about Black Lives Matter protesters, pressuring their Idols to take a stance and contributing millions in donations. For those Anglophone audiences learning about K-pop for the first time, this particular music discovery probably feels like missing the boat on a voyage you didn't know was taking off. How could the needle shift so quickly? K-pop is overwhelming.

And that's understandable. In the history of popular music, American audiences have been hesitant to embrace music recorded in a different language, save for a few Spanish-language superstars. Artists from other cultures are expected to cross over — to translate their work, to white-wash themselves and their performances to sell to the United States, the world's largest music market. For many, a dominant pop form that isn't in English is inconceivable. And yet, here's K-pop, music largely recorded in Korean, born in the early 1990s and now one of the most popular forms of music on the planet, enjoyed by multiple generations of listeners. The numbers may be intimidating, but getting into the music shouldn't be.

Learning to experience K-pop means first ridding yourself of common misconceptions. The basics: K-pop is not a genre, nor do K-pop fans behave like a monolith. The term means "Korean pop," but like "Latin pop," the title is more of a geographic designation for the industry than a sonic one. An "idol system" for auditioning and creating pop talent, not unlike the mechanization of Berry Gordy's Motown in the 1960s and '70s, and financial support for the arts by the South Korean government is responsible for K-pop's dominion, but the music's current popularity in the United States is a relatively new phenomenon: born online, retweeted, streamed and shared ceaselessly.

K-pop music traverses genre with incredible ease — in one moment, taking cues from the dubstep drops that defined pop in the early 2010s, or Swedish hitmakers, or hip-hop, or R&B balladry, or new jack swing, or soul, or euro-pop, or Caribbean dancehall, or salsa and beyond — border-less eclecticism identifiable by the performers themselves, their seismic aesthetic judgments, and their multi-lingual singing. K-pop performers run the spectrum from girl groups and boy bands to soloists and rappers. The evolution of K-pop is defined by indistinct "generations" of the music, the parameters of which are frequently contested by fans and critics alike. Listening to K-pop is only one aspect of getting into industry, as well: The path to discovery is designed so that fans participate online, which means the most ardent supporters are vocal and engage in coordinated publicity efforts, such as streaming new music videos on an endless loop. That said, it is possible to get into K-pop by simply listening to it, and that's what the below playlist hopes to accomplish.

Like any introduction, this should serve as a subjective primer — one curated to best satiate curious Western listeners and give them a skeletal foundation in which to build upon. In truth, the world of K-pop is expansive and exponentially evolving. It is not a matter of if you can find a K-pop artist whose work you'll fall for, it's when. Start digging below.

FIRST GENERATION: The Origins of Idols

Most critics tend to agree that K-pop's origin story begins on April 11, 1992, when the trio Seo Taiji and Boys performed its soon-to-become a hit "Nan Arayo (I Know)" on South Korea's Munhwa Broadcasting Corporation. For many South Korean youths, the track was their first exposure to hip-hop and New Jack Swing (never mind the popularity of both genres in boy band history) and a welcome alternative to traditional styles of music, including "trot," a form of Korean folk.

H.O.T. (aka. High-Five of Teenagers — consider them formative to the trend of naming your group with an initialism for easy comprehension in the global marketplace) is largely credited as the first idol group in K-pop history, meaning that its members were brought together by a company — in this case, Lee Soo-man, founder of SM Entertainment. "Candy" is bubblegum pop at its brightest, cute music no doubt constructed in the model of American boy bands and J-pop.

The girl group S.E.S., also put together by Lee Soo-man, was initially positioned as the female counterpart to H.O.T., though its sound differed drastically as the group's profile grew. On "I'm Your Girl," the group bears a striking resemblance to TLC — it's '90s R&B-pop, to a tee.

Rain, "Rainism" (2008)
(This song is not currently available on streaming in the United States.)

After training to debut in a boy band that never took off, Rain pursued a career as a soloist, eventually becoming the first K-pop star to break internationally. "Rainism" is his most successful single, with a sound not unsimilar to Usher and Justin Timberlake. It is especially noteworthy that many of the lyrics are in English.

Girl group Wonder Girls' retro concept proved to be super successful in 2008, the beginning of a time period routinely referred to as "the golden age of K-pop." The quartet frequently sourced elements from vintage sounds, including Motown — the members embody the Supremes in the video for "Nobody," the first K-pop song to ever chart on the Billboard Hot 100.

Consider Girls Generation's "Gee" the framework in which all future PG-rated K-pop girl groups would follow: It's sugar-y sweet, bouncy pop music all about love and crushing — and its earworm chorus made it almost instantaneously viral, the most valuable currency of all.

It's not just that K-pop, like all forms of popular music, is founded in Black music — as K-pop's presence grew in America, BET was one of its first supporters. Soloist SE7EN's collaboration with American rapper Lil' Kim, "Girls," premiered on 106 & Park.

2NE1's "I Am The Best" is Euro-pop excellence — an empowerment anthem for the club.

The virality of Psy's "Gangnam Style," and it's easily mimicked horse-riding dance move, was the first K-pop song to make a major splash in the United States, but in the greater K-pop story, he's an outlier. The song is ironic and subversive, a criticism of a wealthy neighborhood in Seoul and a larger commentary on inequality. The others on this list are sincere love odes constructed to attract the widest audience.

Gangnam Style: Three Reasons K-Pop Is Taking Over The World

BoA is formative in the K-pop story — she sang in English long before having a few key phrases in the chorus became a norm, and on "Only One," she tackled R&B breakup balladry with total expertise.

Before there was BTS, there was BIGBANG, the break-dancing boy band slated to take over the West. "Fantastic Baby" is the group's biggest hit, a gargantuan EDM-hip-hop beat so popular it was covered in the hit show Glee.

Boy band 2PM's "My House," is seductive, romantic R&B that will charm even the most staunch genre purist.

Some may find GOT7's child-like wonder on "Just Right" cheesy, but "twee-rap" might be a better categorization. The chorus, however, screams early One Direction.

The 12-member EXO offer a darker take on the electro-pop boy band formula on its single "Monster."

In K-pop, it isn't uncommon for girl group and boy band members to pursue solo work outside of their collective duties — it allows them space to explore other creative avenues without breaking the band up, and doubles as a fan service for those listeners who prefer one member to the others (in K-pop, that member is your "bias"). Blackpink's Jennie, and her solo single "Solo," is the exemplar of a member "going solo," as she sings, without diverting too much from the integrity of the group. This one is for fans of big pop anthems and old school hip-hop whistle.

Girl group April's "Oh My Mistake" is '80s synthpop with shimmering production — it is impossible to hear this and not feel giddy.

The biggest girl group on the planet is Blackpink, a K-pop quartet without a full-length LP under its belt. With singles as ferocious as the air horn-adorned stadium anthem "Kill This Love," it's easy to see why: the single marries military cadences with trap, emphasized with gargantuan synthesizers.

Any number of BTS songs would be appropriate to include here — check out "No More Dream," the group's first single, to get a sense of their range. That song rallied against a rigid education system that places untenable pressure on young people in South Korea, while "Boy With Luv" is an earworm single featuring one of the greatest American popstars of the 21st century. It's also one of BTS's most irresistible singles, a roller rink disco number punctuated with an almost house-like bass drum.

The latest generation of K-pop superstars are no longer bound by borders—they can debut or train outside of South Korea and become just as, or even more successful in the West than they are back home. They also continue to expand upon K-pop's constant musical experimentation. Eight-person boy band Ateez's hit "Say My Name," for example, is built around a pan flute, and main rapper Mingi, with his raspy tone so low it recalls Scandinavian post-punk more than any other vocalists on this list, sings the chorus. It is so distinctive, listeners will have no choice but to forgive them for giving their song the same title as a Destiny's Child classic.

Maria Sherman is a senior staff writer at Jezebel and the author of the book Larger Than Life: A History of Boy Bands from NKOTB to BTS.